1. Introduction Polymer-layered silicate nanocomposites have attracted increasing interest from both scientific and industrial perspectives because this new class

2 The PA6/PP composition was kept constant (PA6/PP = 70/30 parts) while the elastomer (either POE or POEgMAH) content varied between 5 and 20 wt%. PP grafted maleic anhydride (PPgMAH) was used to compatibilize the blend system. The impact strength of the nanocomposite sys- tem was examined by the conventional Izod impact test at room temperature (RT). In addition, linear elastic fracture mechanics (LEFM) approach was used to study the fracture response of the notched three point bending type specimens at room temperature (RT) and 40 C. Fracture surfaces of the broken specimens were examined using scanning electron microscopy. The results show that while POEgMAH can remarkably improve the compatibility between PA6 and the elas- tomer thus increasing the toughness, the unmodified POE has less significant contribution to PA6/PP/organoclay tough- ness.

3 Elastomer domains of POEgMAH show a finer and more uniform dispersion than that of POE in the PA6/PP/organoclay matrix. It is also observed that the toughness increased with the increasing elastomer concentration for both unmaleated and maleated POE. Keywords: nanocomposites, fracture toughness, impact strength, linear elastic fracture mechanics, Ethylene-octene elastomer 1. Introduction polymeric materials, binary or ternary blends Polymer-layered silicate nanocomposites have [2 6]. attracted increasing interest from both scientific However, for any single thermoplastics nanocom- and industrial perspectives because this new class posites system such as polyamide 6 (PA6) nano- of materials shows significant improvements in composites, incorporation of organoclay at high mechanical properties, barrier properties and ther- loading usually resulted in a severe embrittlement mal resistance at lower clay loading compared to manifested in a drop of the impact strength and pristine matrix [1].

4 In the last few years, much elongation at break [2, 7, 8]. For the thermoplastic effort has been devoted to develop the thermoplas- blend nanocomposites system, Chow et al. [3]. tic nanocomposites based on blends of two or more reported that PA6/PP nanocomposites exhibited *Corresponding author, e-mail: BME-PT. 309. Wahit et al. eXPRESS Polymer Letters , (2009) 309 319. improvement in modulus and strength as compared toughness of the nanocomposites but with limited to the pristine PA6/PP but at the expense of tough- success due to insufficient compatibility between ness. A similar observation has also been reported PA6 and POE. for micro-composites based on another blend sys- Conventionally, toughness has been characterized tem [5]. by the Izod impact test. However, the Izod impact The most widely applied method to overcome this test data cannot be used for design purposes, drawback is blending with elastomers such as although they can be used for comparing the tough- maleated ethylene -propylene copolymer (EPRgMAH) ness between different polymer systems.

5 With the [3, 7] and maleated styrene- ethylene -butadiene- objective to characterize toughness of polymer styrene rubber (SEBSgMAH) [9 11]. According to nanocomposites with greater accuracy, many Gonz lez et al. [11], the addition of up to 6% of an researchers have adopted fracture mechanics organoclay to a 70/30 PA6/SEBSgMAH blend led approach in their studies [2, 16, 17]. to ternary compounds combining the stiffness Furthermore, the toughness evaluation of PA6/PP/. improvement due to the inclusion of clay and the elastomer nanocomposites, particularly fracture toughening effect of the rubber. It was shown that toughness, has not been systematically investi- in the 70/30 blend with 3% organoclay, supertough gated. Only few studies can be found in the litera- behaviour of the nanocomposite was accomplished ture on the fracture behavior of PA6/PP/elastomer with a modulus increase of 44% with respect to the nanocomposites.

6 The results from our previous pure PA6 matrix. work have shown that for PA6/PP blend with the However, to our knowledge not many papers had 70/30 blend ratio, the toughness of the blends attempted to examine the fracture toughness of rub- increased significantly while the strength and stiff- ber toughened PA6/PP nanocomposites using lin- ness of PA6 was not much affected as compared to ear elastic fracture mechanics (LEFM) approach. other blend ratio 60/40 and 50/50 [7]. This is The objective of our study is to investigate the the reason why in this study varying amount of effectiveness of Ethylene-octene elastomer (POE) unmaleated and maleated POE have been incorpo- and Ethylene-octene elastomer grafted maleic anhy- rated to 70/30 PA6/PP nanocomposites. Particular dride (POEgMAH) as an impact modifier for attention will also be paid to the fracture toughness PA6/PP/organoclay blends system using conven- of the nanocomposites system measured using tional Izod impact test and LEFM approach.

7 POE, a LEFM. relatively novel polyolefin elastomer, was devel- oped by Dow Chemical Co. using a metallocene 2. Materials and sample preparation catalyst. Compared with EPR, POE typically exhibits easier mixing and better dispersion when The blends used in this work are described in blended with PP [7, 12 14]. In our previous work, Table 1. The PP (SM 240) was obtained from Titan POE was used as a toughening agent to form rub- PP Polymers, Johor Bahru, Malaysia. The melt ber- toughened PA6/PP nanocomposites [7, 14, 15]. flow index (MFI) and density were 25 g/10 min The result showed that the addition of POE to the and g/cm3 respectively. The PA6 (Amilan CM. PA6/PP (70/30) nanocomposites improved the 1017) was a commercial product of Toray Nylon Table 1. PA6/PP (70/30) nanocomposites blend composition [wt%].

10 By the simultaneous addition of all components to a From the fractograms recorded as shown as an Berstoff co-rotating twin screw extruder. The barrel example in Figure 1, the maximum load (Fmax), and temperature was maintained at 200, 220, 230 and the energy absorbed up to Fmax (energy required for 240 C from hopper to die, and the screw rotation fracture initiation, Einit) were analyzed. For Kc speed was fixed at 50 rpm. Prior to blending, PA6 (based on Fmax) and Gc (based on Einit) determina- pellets were dehumidified using a dryer at 80 C for tion, the method adopted in ISO13586 was used 8 h. The extruded materials were injection moulded [18]. into standard tensile, flexural and Izod impact spec- imens using a JSW Model NIOOB II injection- 3. Results and discussion moulding machine with a barrel temperature of 210 240 C. 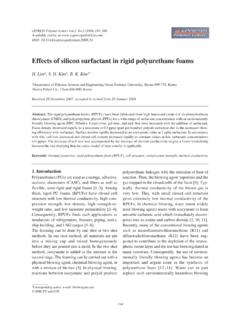 agents. However, the excessive use of water causes a negative pressure gradient due to the rapid diffu-sion of CO2 through the cell wall causing cell deformation [2, 3, 15, 16]. 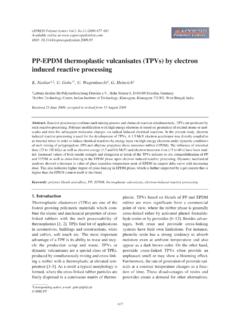 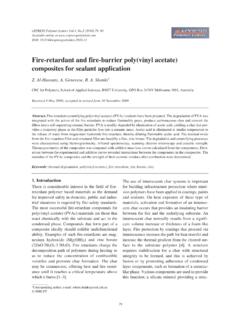 1. Introduction There is considerable interest in the field of fire-retardant polymer based materials as the demand for improved safety in domestic, public and indus- 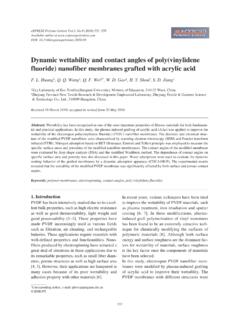 prepared by electrospinning for the investigation into the relationship between dynamic wettablity and fibrous structures. The wettability of a material can be characterized 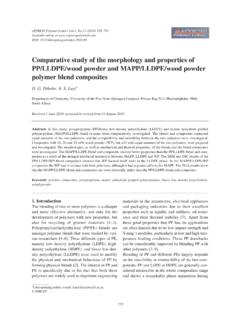 Comparative study of the morphology and properties of PP ...

study the morphology and interphase structure of an LLDPE/PP blend. They reported that no cross orientation was observed when PP and LLDPE were blended, and this finding was supported by