RESOURCES. This paper explains, for communities and anti-poverty groups, the Evolution of Health Services and Health Policy in Ireland. It gives an overview of the Health Services , from their origins and development to current policies and contemporary issues. In addition, it examines the role of voluntary and community organisations in providing Health Services and their relationship with the state. The paper focuses on Health inequalities and government policies to address them and suggests further sources design by of information. Evolution Of Health Services And Health Bridgewater Centre, Conyngham Road, Islandbridge, Dublin 8. Policy In Ireland Tel: 01 670 6746 Fax: 01 670 6760 Email: Website: Brian Harvey Evolution Of Health Services and Health Policy In Ireland AUTHOR. Brian Harvey is an independent social research consultant, based in Dublin, specialising in issues of social Policy , poverty, equality, community development and European integration.

Evolution of Health Services and Health Policy in Ireland AUTHOR Brian Harvey is an independent social research consultant, based in Dublin, specialising

1 RESOURCES. This paper explains, for communities and anti-poverty groups, the Evolution of Health Services and Health Policy in Ireland. It gives an overview of the Health Services , from their origins and development to current policies and contemporary issues. In addition, it examines the role of voluntary and community organisations in providing Health Services and their relationship with the state. The paper focuses on Health inequalities and government policies to address them and suggests further sources design by of information. Evolution Of Health Services And Health Bridgewater Centre, Conyngham Road, Islandbridge, Dublin 8. Policy In Ireland Tel: 01 670 6746 Fax: 01 670 6760 Email: Website: Brian Harvey Evolution Of Health Services and Health Policy In Ireland AUTHOR. Brian Harvey is an independent social research consultant, based in Dublin, specialising in issues of social Policy , poverty, equality, community development and European integration.

2 He works for voluntary organisations, community groups, civil society and non-governmental organisations as well as government agencies, trusts and foundations in both parts of Ireland, Britain and continental Europe. Published by Combat Poverty Agency Bridgewater Centre Islandbridge, Dublin 8. 2007. ISBN: 978-1-905485-36-9. While every effort has been made to ensure that the information contained in this book is accurate, no legal responsibility is accepted by the author or Combat Poverty for any errors or omissions. The views expressed in this publication are the author's own and not necessarily those of Combat Poverty Agency. Evolution of Health Services and Health Policy in Ireland TABLE OF CONTENTS. Context and overview 4. Organisation of the Health Services 5. Role of voluntary and community organisations 7. Health Policy 9. Poverty and Health 11. Issues in Irish Health Policy 13. Relationship between the state and the voluntary and community sector 15.

3 Conclusions and future 17. Further information 18. Combat Poverty Agency's Building Healthy Communities programme 18. Useful websites 18. Bibliography 19. Evolution of Health Services and Health Policy in Ireland . Context and overview paper, Social security (1949), the government proposed a system of universal social Health Services in Ireland began in the 18th insurance. Between them, these white papers century in the voluntary, philanthropic and set the Republic on course for a welfare private sector. Doctors, concerned citizens state and a universal, national Health service. and philanthropists, motivated by the These years thus marked an important condition of the sick poor, founded the first turning point in the development of Health hospitals in the 1720s, funding them through and social Policy in the Irish state. legacies, donations and public subscriptions. However, the Health proposals foundered In the early 19th century, there was a on ferocious opposition from the medical substantial growth in hospital and related profession, the Catholic Church and the Services run by Catholic religious orders Department of Finance.

4 The social insurance and lay organisations. In the mid-19th proposal also failed, with subsequent century, the British government introduced governments taking the view that Ireland the workhouse or poor law system, which could not afford a welfare state as extensive provided infirmaries, dispensaries and as that in Great Britain and Northern medical officers to care for the very poor. Ireland. Instead, in both welfare and Health However, standards were set intentionally low Policy , successive governments opted for to prevent malingering. incremental improvements when and as the country could afford them. In 1922, the Free State government turned the workhouses into county homes for a The pattern of a two-tier Health service wide range of poor people with medical became firmly established. When the medical and social needs. Generally, though, Health card system (the General Medical Scheme or Services were not a financial priority in the GMS) was introduced in 1970, it was on the early years of the state.

5 Instead, public Health understanding that coverage would be limited Services were delivered through the local to not more than 40% of the population. (In government system until 1970 and funded practice, it has often been much less than through lotteries (the hospital sweepstakes). that and closer to 30%). For most people, the The most significant achievement of the early result was a complex system of subsidised state was the drive to eliminate tuberculosis Services , state and private Health insurance, (TB) in the late 1940s. The Department of with payment at most points of use. A. Health was established in 1947. state-sponsored Health insurance scheme, Voluntary Health Insurance, was introduced By contrast, in Britain, the 1942 Beveridge in report (Report on social insurance and allied Services ) proposed a universal scheme of 1 For the history of Health Services in Ireland, see social insurance and a National Health Barrington, Ruth: Health , medicine and politics in Service for all citizens, free at the point of Ireland, 1900-70.

6 Dublin, Institute of Public Ad- ministration, 2000; and O'Cinneide, Seamus: The use. Impressed by these developments, the 1949 white paper and its impact on social welfare Irish government published a white paper, Policy in: Lavan, Ann (Ed): Fifty years of social Outline of proposals for the improvement of the welfare Policy . Dublin, the Department of Social Health Services (1947), proposing a similar Community & Family Affairs, 1999. Health system in Ireland. In a second white Evolution of Health Services and Health Policy in Ireland Organisation of the n bolishing the 11 Health boards and A. Health Services replacing them with a single national Health service organisation called the There have been two organisational Health Service Executive (HSE);. upheavals in the Irish Health service. aking the Department of Health M. The first happened in 1970 when n (now called the Department of Health Services were removed from Health and Children) responsible for the local authority system and deciding Policy and the Health Service re-organised as eight regional Executive responsible for executing Health boards under the the Policy , administering and managing.

7 Department of Health . These eight n . Abolishing or merging most of the regional Health boards had a broadly 43 semi-state Health agencies and similar organisational structure, with bringing them into the department;. three programme areas (hospital n emoving the system of local R. Services , special or psychiatric accountability and making the Minister hospitals and community care), for Health and Children theoretically each under a manager. The Health responsible for Health Services through boards' consisted of local authority the D il. (In practice, parliamentary councillors, representatives of the questions about Services are referred to the parliamentary division of the senior medical professions and HSE for answer). people nominated by the Minister for Health who met each month. The new system marked a substantial shift from a decentralised, almost federal In the 1990s, the Eastern Health Board system to a national, unified, command was sub-divided into three smaller system run on a much more technocratic boards (northern, south-western and east basis.)

8 Coast), resulting in a total of 11 regional Health boards by the end of the century. Following approval by the Oireachtas of Meantime, about 40 semi-state agencies the Health Act, 2004, the Health Service concerned with Health had emerged, Executive came into being on 1 January with specialised functions ranging from 2005. It operates through four regions advice to regulation, research to Health and 32 Local Health Offices (LHOs). promotion. and publishes an annual Service plan explaining how it plans to deliver its The second major reorganisation of the Services each year. Health Services followed the publication of the Prospectus report in 2003. This So far, the full recommendations of the reorganisation was designed to make Prospectus report have not been put into the Health Services more unified, effect and there has been a remarkable efficient and streamlined and, some say, continuity of personnel, policies and less vulnerable to local and parochial approaches, with former Health board pressures.

Since Developing Facilitation Skills was first printed in 1995, it has been used extensively by a very wide range of people who wanted to …

A History of Managed Health Care and Health …

intrOductiOn Health insurance and managed health care are inventions of the 20th century. For a long time, they were not considered to be “insurance” but rather “prepaid 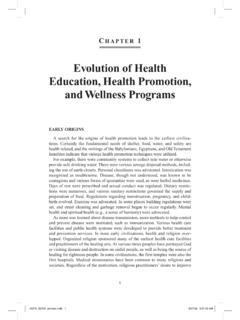 Chapter 1 Evolution of Health Education, Health Promotion, and Wellness Programs EARLY ORIGINS A search for the origins of health … 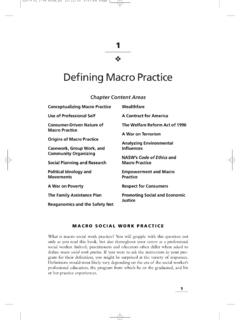 approach emphasizes seeking ways in which consumers can redeﬁne and change managed care, both locally and nationally, in order to achieve control 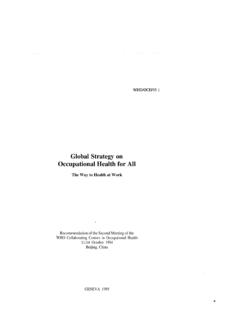 Global Strategy on Occupational Health for All - …

Telemedicine supports maternal and newborn health in Mongolia ..... 16 2.2.2 Barriers to realizing the promise of telemedicine in developing countries ..... 18

Excellence and Discovery An Overview