Farmers’ Adaptation to Water Management under …

2 Collected data were analysed using Descriptive Statistics. The research findings revealed that the majority of the sample group were men with the average age of 50, married, Buddhist, and had primary-level education. Most of them are Thai and the rest are from other ethnic groups. The average individual income was 83,947 Baht per year and the annual household income was163,968 Baht. Farming areas were Rai per household and most of the sample farmers have ownership over the land. Major cash crops include rice, maize, longans and garlics. Labor used in farming was domestic. Most of the farming areas were non-irrigated and depended on natural Water sources, particularly rain Water . 10% of farming areas flooded for their plants and 25% face inadequate Water supply and no action were taken. The only way was to let the nature solve itself. With regard to farmer's perception of global warming, 74% of the sample farmers perceived of the issue.

3 Most of them explained that global warming was the increase of temperature which affect the changes of seasons and result in products loss due to the increase of various diseases and insect plant pests. The increase use of pesticides and fertilizers also meant higher cost of production and lower income. 68% of the farmers described climate changeas the fluctuation of temperatures which could slow down the growth of plants, contribute to the spread of new diseases and insects. This would result in the higher cost of maintenance and decrease of income. Supports from the government sector which farmer's need were the provision of reserved Water supply in case of drought. Keywords: Adaptation , Water Management , Effect of Climate Change Introduction Public Policy Studies Institute (2009) reported that in 2007, IPCC 4th Assessment Report(AR 4)concluded that temperature rising was resulted from *. Coressponding author: Mekanupak, S.

4 ; Email: human activities which apparently affected global physical and biological systems, as well as natural systems in every continent. In Thailand, a study was conducted in order to predict climate change, based on the hypothesis that human's development activities were continually increasing and living behaviors continued without the decrease or control of greenhouse gases. Due to the above mentioned future situation on environmental change. It is obvious that the Thailand's natural resources, especially Water , sea and seashores, forest, ecosystem and biodiversity will be affected. Since Thailand's economy is based on its natural resources and a vast number of its people are in agricultural sector or production & service sectors which require agricultural raw materials and/or natural resources food processing and tourism industries, the country tends to be seriously affected by environmental change. Thailand, thus, urgently needs to get ready to adapt and cope with such change.

5 Thailand has 3 seasons including summer (March, April and May);. rainy season (June, July, August, September and October); and winter (November, December, January and February). Farmers have adequate amount of Water for farming only in the rainy season. The Water shortage usually happens in dry seasons and production can be less than it should be. Jaroenmuang (2008) pointed that Chiang Mai Province covers a vast area of forests and mountains. Its forests vary by altitudes: 100-800 meters over sea level are dry evergreen forests; 50-1000 meters over sea level are dry dipterocarp forests; and 1200-1500 meters over sea level are cloud forests. Cloud forests take in Water and humidity from floating clouds and they are at great risks from the future environmental change. Chiang Mai also covers valley basins which makes it ideal for rice farming. In the past, Chiang Mai Province was so fertile and productive that its agricultural productions were enough for local consumption with additional surplus for exporting to other provinces and countries.

6 Nevertheless, in the last 2 decades, its agricultural areas have been invaded by the real estate sector and fertile areas with well-invested irrigation have been decreasing. Also, they are apparently affected by the environmental change. The studied areas have continuously faced similar impacts of environmental change natural disasters which damage agricultural produces. One example is the year 2005. ( ) when heavy rain from Chiang Dao Mountains caused 4 unexpected big floods in Chiang Mai. There had not been any floods for a long while especially after the construction of Mae Tang Dam. People, therefore, were not prepared and a great damage was caused. (Jaroenmuang, 2008). Chiang Dao District is the origin of the Ping River. The area is significant for farming in the upper part of the Ping River Basin particularly for its biodiversity and plant varieties. The considerable decrease of forests in this area is a major concern 188.

7 International Journal of Agricultural Technology 2016 Vol. 12(2):187-194. and it is interesting to see how local people, particularly farmers who are the biggest population of Chiang Dao District, are affected by climate change. This research will try to understand and present some facts. This research aimed to study farmers' Adaptation to effects of climate change, especially Adaptation on Water Management and farming in Chiang Dao District, Chiang Mai Province. This research will also seek alternatives for Water Management in order to improve farmers' wellbeing. Climate change obviously affects farming and plant growth. Agricultural produces may decrease due to Water shortage which is a major problem faced by many farmers. The purpose of this research was to consider farmer's perception and Adaptation to climate change and its effects, especially Water shortage and Water Management , as well as their solution in the future.

8 The objectives of reserch findings were to study demographic data of farmers, their farming conditions and Water Management in farming in Chiang Dao District, Chiang Mai Province and to evaluate farmers' perception toward climate change. Materials and methods Population Selection and Sampling Techniques: Among 9,781 farmer households who registered with Chiang Dao District Agricultural Extension Office, farmers were chosen using Sampling Techniques. The sample size is calculated by using the formula of Yamane (1967) and the number of farmer households were 384. Data were collected as follows:- primary data included demographic data of farmers, gender, age, religion, race, ethnic group, marital status, education attainment, member in family, income from farming, farming area, plant varieties, and data of farming including Water Management . Data were gathered using individual interviews on perception of climate change, Water usage in farming and farmers' Adaptation toward climate change which affects farming and planning for better Water Management in the future. 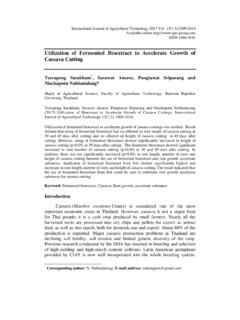 Utilization of Fermented Bioextract to Accelerate …

International Journal of Agricultural Technology 2017 Vol. 13(7.3): 2409-2414 2411 and plant height were collected and analyzed analyzed for Analysis of variance 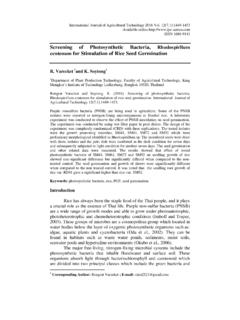 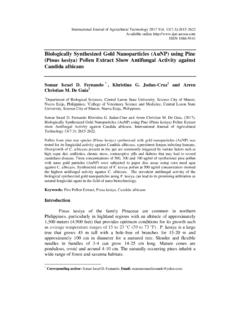 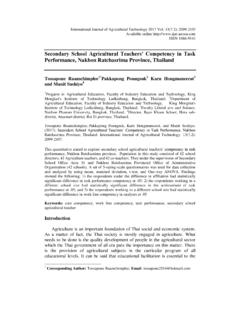 2100 development of quality of life of Thai farmers. Importantly, the goal of educational facilitation in accordance with the core basic education curriculum, 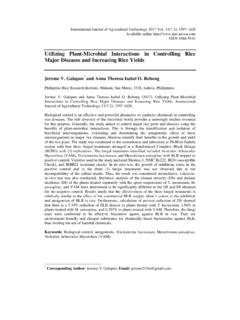 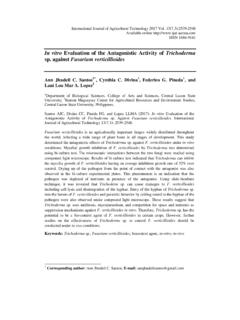 In vitro Evaluation of the Antagonistic Activity of ... 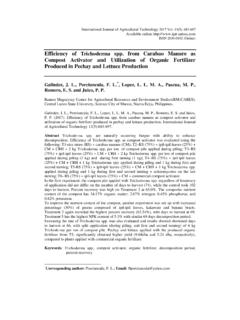 Efficiency of Trichoderma spp. from Carabao …

686 Experimental Set-up Re Application of Trichoderma spp. with Additional Greens in the Raw Materials To increase nutrient content of the produced organic fertilizer 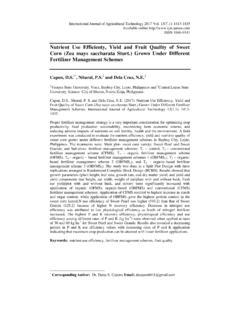 Nutrient Use Efficienty, Yield and Fruit Quality of … 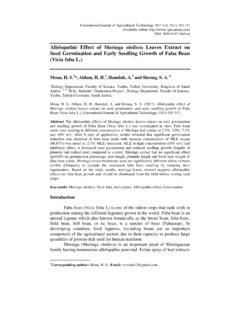 106 of moringa accelerates the growth of plants, improves resistance to pests and diseases, and enhances the yield by 20–35 % in different crops (Fuglie 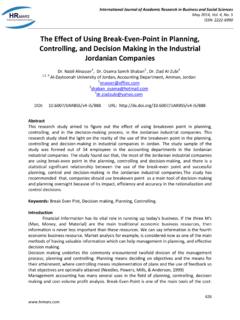 The Effect of Using Break-Even-Point in Planning ...

International Journal of Academic Research in Business and Social Sciences May 2014, Vol. 4, No. 5 ISSN: 2222-6990 626 www.hrmars.com The Effect of Using Break-Even-Point in Planning,