Femal, a herbal remedy made from pollen extracts, …

2 After an initial run-in phase of 1 month, the women were randomly given either two Femal tablets each morning, or two identical placebo tablets, for 3 months of treatment. On inclusion, and then at 4-week intervals, the patients were asked to evaluate 16 symptoms of the menopause using Menopause Rating Scales (MRS). In addition, every day throughout the study , certain menopausal symptoms were recorded in a diary. Results The two treatment groups were identical regarding demographic data and the initial symptom scores. In the active-treatment group, 65% responded with a reduction in hot ushes compared with 38% in the placebo group (p 5 ) and, in this group, the number of hot ushes registered in diaries declined after 3 months by 27% as compared to the placebo group (p 5 ). MRS evaluation of hot ushes yielded similar results (p 5 ). There were 23% and 22% decreases in hot ushes after 2. and 3 months of treatment, respectively, and after both intervals of time the inter-group comparisons were signi cantly affected.

3 An overall evaluation of the trend in 15 other quality-of-life' parameters showed likewise in favor of the pollen extract (p 5 ). Conclusion The pollen extract Femal signi cantly reduces hot ushes and certain other menopausal symptoms when compared to placebo . Correspondence: Dr K. Winther, Department of Clinical Biochemistry, University Hospital of Copenhagen in Gentofte, 2900 Hellerup, Denmark ORIGINAL ARTICLE Received 9-08-04. 2005 International Menopause Society Revised 6-12-04. DOI: Accepted 6-12-04. Hot ushes and pollen Winther, Rein and Hedman results7,8. These observations encouraged us to INTRODUCTION design a double-blind, placebo - controlled trial to The endocrine changes which lead to the meno- evaluate whether Femal is superior to placebo in pause result in various physical symptoms such as alleviating menopausal symptoms. hot ushes, vaginal dryness and palpitations, and in symptoms of a more physical nature such as irritability, changes in mood and sleep habits1.

4 As MATERIALS AND METHODS. estrogen levels are known to dwindle during the menopause2, replacement of such hormones has The product gradually become the rst choice of treatment; Femal contains two active ingredients: a pure perhaps as many as one-third of menopausal pollen extract (GC Fem), and a combined pollen women in advanced western societies now use and pistil extract (PI 82); the latter contains high hormone replacement therapy (HRT) to alleviate activity of the antioxidant enzyme superoxide their symptoms3. However, evidence has recently dismutase9. The pollen and pistils are selected and been put forward that estrogens worsen the risk of harvested, separately, in a standardized manner, breast cancer and increase the incidence of from members of the grass (Poaceae) family, coronary arterial disease and stroke4. These including rye (Cecale cereale). The cultivation factors, plus the marked resurgence of public and harvesting of the de ned species are made on interest in, and open-mindedness about, herbal separate elds under full quality control according medicines in the last two decades, make it relevant to good agricultural practice.

5 pollen is selected for to look for alternative, non-hormonal treatments the GC Fem preparation and selected pollen and of menopausal symptoms, and there has been no pistils are mixed in a standardized manner to lack of candidates. A recent, computer-based generate the PI 82 formulation. In the extraction search of the world literature, seeking speci cally process, performed according to good manufac- for controlled clinical trials in menopausal wo- toring practice by Allergon AB, Va lingeva gen 309, men, unearthed 18 such studies between 1985 and A ngelholm, Sweden, an approved manufacturer of 20025. Four dealt with black cohosh, four with active pharmaceutical ingredients, the pollen and red clover, three with kava, one each with evening pistils are treated with enzymes to achieve primrose oil and ginseng, and four with combina- germinal opening. The extract is then removed tion products. The conclusions of the abstract by ltration, leaving the pollen shells, which can were There is no convincing evidence for any be allergenic, behind.

6 The extract is de ned by herbal medical product in the treatment of HPLC and GC to assure the amount of active menopausal symptoms'. However, the evidence ingredients. The extract is mixed in a standardized for black cohosh is promising, albeit limited by formulation. This standardization procedure re- the poor methodology of the trials. The studies on sults in tablets which always contain 40 mg GC. red clover suggest it may be of bene t for more Fem and 120 mg PI 82. In addition, the prepara- severe menopausal symptoms. There is some tion is standardized to always contain 14 mg of evidence for the use of kava, but safety concerns amino acids per tablet. mean this herbal product is not a therapeutic This procedure is different from the technique option at present. The evidence is inconclusive for often used for the production of pollen remedies, the other herbal medicinal products reviewed5. which is frequently based on crushing techniques We have earlier, in a fully controlled , random- whose end-products can mix fragments of the ized clinical trial, demonstrated that Femal, made shells with the content of the pollen .

7 The method from extracts of the same type of pollen using the described for the present pollen -based product same methodology as described in this paper, could explain the good safety record achieved, alleviates the symptoms of premenstrual tension6. since allergic reactions to shell fragments cannot The present preparation also has a good safety occur. record (Gentox Project No: 114-001, exp No: F11-005, 1988) with few milder adverse effects reported to date. Inclusion/exclusion criteria Over the 6 years that Femal has been generally Through advertisements in local newspapers, we available in Scandinavia, more and more women recruited to the trial 64 women with menopausal have claimed that the product also alleviates the symptoms of at least 6 months' duration. More symptoms of the menopause, and two open trials than one episode of hot ushing per day was the involving 96 menopausal women showed similar only mandatory requirement and, to qualify, this Climacteric 163.

8 Hot ushes and pollen Winther, Rein and Hedman had to be accompanied by at least two of the from an identical batch number (722211). The following eight symptoms: profuse sweating, sleep remaining 32 patients were given placebo , two disturbance, joint pain, mood swings, vaginal tablets each morning, of similar taste, color and dryness, decline in libido, absent or irregular size, both treatments to last 3 months (Figure 1). menses, palpitations. We excluded patients with Randomization was made in blocks of four using known allergy, severe liver, kidney, stomach or a computerized system. cardiovascular disease, or an earlier or current A member of the research staff then saw the diagnosis of cancer. The study was conducted in patients in the clinic at 1-month intervals. At each accordance with good clinical practice and the of these four visits, the patient gave her overall declaration of Helsinki. The local Ethical Com- evaluation of hot ushes during the past month mittee approved the study (no.)

9 112/02) and all the (perhaps the most characteristic symptom of the included patients gave their signed, informed menopause and here adopted as the primary effect consent beforehand. variable), plus an MRS for each of 15 further individual symptoms. These were: vaginal dryness, bladder symptoms (frequency or incontinence), Trial procedure joint pain, general mood, irritability, depression, The trial opened with a random allocation to palpitations, disturbed sleep, tiredness, altered either placebo or Femal treatment, on the day of libido, energy, mood swings, excessive sensitivity inclusion, but the rst 1 month of the study was a touchiness', dizziness and headaches, symp- no-treatment, run-in period (Figure 1) during toms which also re ect the Kupperman index12. which we evaluated the patients and instructed Our study of the effect of Femal on the them how to record daily their menopausal premenstrual syndrome6 found that taking Femal symptoms in a diary and how to make a global diminished water retention and reduced weight, so evaluation of their symptoms on a 100-mm these aspects were also included and evaluated at Menopausal Rating Scale (MRS)10,11.

10 Dietary the monthly clinic visits. intake was not monitored, but all our volunteers In addition, the patients recorded daily, in a were carefully instructed, on each visit at the diary, the daily number of hot ushes, the clinic, not to change their daily diet or physical frequency of changes of underwear needed be- activity during the trial. The tablets produced for cause of sweating episodes, and the number of the 32 patients who were allocated to treatment menstrual spottings or menses-like bleeds. The with Femal, two tablets each morning, all came patient returned the diary to the clinic each month 2 patients dropped out: 5 patients dropped out - skin rash during the run-in phase: - onset of diabetes 2 - personal reasons 1 - skin rash n = 30 n = 28. 1 - diagnosed diabetes 1 month 2 months 3 months 1 - symptoms disappeared placebo . 1-month run-in 1 patient 1 month 2 months 3 months ACTIVE. excluded for n = 28 n = 26. previously unreported 1 patient excluded for taking history of estrogen after 2 weeks in the 1 patient dropped out for breast cancer trial personal reasons Figure 1 Flow-chart giving the design of the study and the drop-outs 164 Climacteric Hot ushes and pollen Winther, Rein and Hedman and was supplied with a new, identical version women with premenstrual syndrome6, and from and instructed how to continue recording. 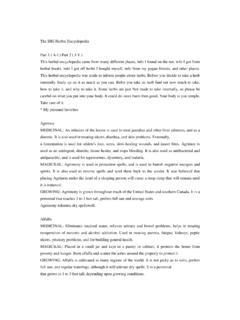 The BIG Herbal Encyclopedia Part 1 ( A-I ) Part 2 ( J-Y ) This herbal encyclopedia came from many different places, info I found on the net, info I got from 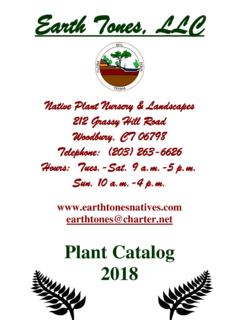 Who We Are - Earth Tones Native Plant Nursery

Who We Are: Earth Tones, LLC is a native plant nursery that offers ferns, grasses, perennials, shrubs, trees, and vines that are native to our local region. 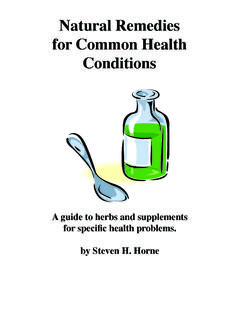 A guide to herbs and supplements for specific health problems. by Steven H. Horne Natural Remedies for Common Health Conditions 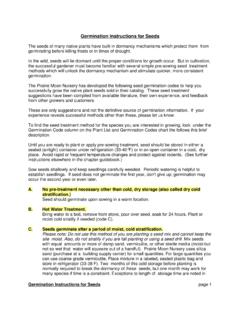 Germination Instructions for Seeds - Wild Ones 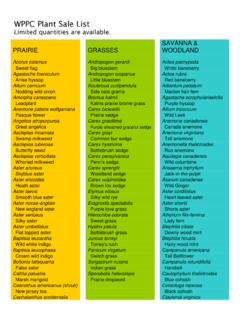 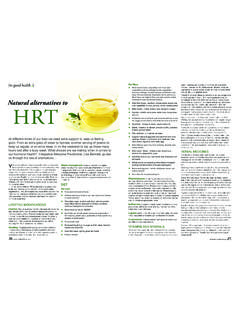