2 Results A wide range of values were noted for each measurement. There was no statistically significant association with age, parity, ethnicity, hormonal use or history of sexual activity. Conclusion Women vary widely in genital dimensions. This information should be made available to women when considering surgical procedures on the genitals, decisions for which must be carefully considered between surgeon and woman. INTRODUCTION ,8 Recent work has demonstrated that the cosmet- ic outcome of surgical attempts to create normative femi- Although representations of Female nudity are common, nine genital appearance tends to be poor, with up to 80%. detailed accurate representations of Female genitals are requiring further reconstructive rare. In the popular press, publications such as Femalia' Secondly, some women with no underlying condition address such a gap and have contributed to awareness of affecting their genital development also seek surgery to the diversity of Female genital ,2 Although lay alter the appearance of their genitals, for example, labial representations vary according to historical and cultural or clitoral ,11 Reasons for such requests are far conditions, scientific work is supposedly screened of such from understood.

3 But implicit in a woman's desire to alter influence. There are demonstrable shifts in the scientific genital appearance may be the belief that her genitals are representation of Female anatomy3,4 and it is notable that not normal, that there is such a thing as normal Female even some recent text books of anatomy do not include the genital appearance , that the operating surgeon will know clitoris on diagrams of the Female ,6 what this is, that he or she will be able to achieve this for Women who seek cosmetic genital surgery fall into two her and that this would somehow improve her wellbeing or main categories. Firstly, women with congenital condi- relationships with others. tions such as intersex for which current standard practice There are few reports in the literature regarding overall advises feminising genitoplasty procedures, with the objec- normal' Female genital appearance or normal' dimensions tive of reducing clitoral size and opening the vaginal and exact positioning of the vagina, clitoris, labia and 15 Yet this information is crucial for surgeons and patients in planning for and assessing the cosmetic outcome of genital surgery.

4 The current study aims to Department of Gynaecology, Elizabeth Garrett Anderson address this gap in our knowledge by providing data on Hospital, University College London Hospitals, UK the anatomical dimensions and configuration of adult Female genitalia. Correspondence: Ms S. M. Creighton, Department of Gynaecology, Elizabeth Garrett Anderson Hospital, University College London Hospitals, Huntley Street, London, WC1E 6AU, UK. * What is already known on this subject: Very few studies are available in the literature on the range of measurements METHODS. of Female genitalia. Recent studies have found that the clitoris is more extensive than previously thought. genital surgery is known to cause Study participants were recruited from gynaecology problems with sexual function. operating lists at a central London teaching hospital.

5 What this study adds: This study illustrates the wide range of genital dimensions in normal Ethical approval for the study was obtained from the Joint women. This information can be considered by women and doctors when Hospital and University Ethics Committee. Women having making the decision to have genital surgery. routine procedures, such as hysteroscopy or diagnostic D RCOG 2004 BJOG: an International Journal of Obstetrics and Gynaecology 644 J. LLOYD ET AL. laparoscopy, were given an information leaflet, and written Table 1. Measurements of genitalia. consent was then obtained from the 50 women who chose Range Mean [SD]. to take part. Age, parity, ethnicity, use of systemic hor- mones and sexual activity history were recorded. Clitoral length (mm) 5 35 [ ]. Participants were excluded if they were non-English Clitoral glans width (mm) 3 10 [ ].

6 Clitoris to urethra (mm) 16 45 [ ]. speakers without an interpreter present, were under the Labia majora length (cm) [ ]. age of 18, were postmenopausal or if they had previously Labia minora length (mm) 20 100 [ ]. undergone any surgery to the external genitalia. Women Labia minora width (mm) 7 50 [ ]. who had undergone Female genital mutilation/cutting were Perineum length (mm) 15 55 [ ]. also excluded. Vaginal length (cm) [ ]. Tanner stage (n) IV 4. Once anaesthetised, women were placed in the lithot- V 46. omy position. Measurements were taken directly from the Colour of genital area compared Same 9. woman in accordance with the diagram in Fig. 1. A dis- with surrounding skin (n) Darker 41. posable tape measure was used for all measurements other Rugosity of labia (n) Smooth 14. than vaginal length, for which a vaginal swab was used to Moderate 34.

7 Marked 2. measure from the posterior vaginal fornix to the introitus. Clitoral body length, clitoral glans width and distance from the base of the glans to the urethral orifice were recorded. Measurements were also taken of labia majora gynaecologist (SMC) in order to clarify exact dimensions (length), labia minora (length and width) and distance to be measured. The subsequent 20 women were exam- from posterior fourchette to anterior anal margin (perine- ined with both registrars present in order to ensure con- um). Rugosity and skin tone of the labia majora and hair sistency in measuring. After this time, measurements were distribution according to Tanner's stages were A undertaken independently. digital photograph of the external genitalia was taken Analysis of data was performed using SPSS (version prior to skin preparation and draping for surgery.)

8 All ), with Spearman's correlation and descriptive statistics examinations and photographs were taken by one of two as appropriate. A P value of < was deemed significant. gynaecology registrars (JL or NSC) in order to minimise inter-observer variability. The first two women were examined under the direct supervision of a consultant RESULTS. Over an eight-month period, 58 women were invited to take part and 50 agreed giving an 86% acceptance rate. The most common reasons for declining were embarrassment, or concern about a partner's reaction. All women were premenopausal, and aged between 18. and 50, with a mean of [ ]. The majority of women were white (n 37), with five Asian women, six black women, one Latin American woman and one woman who was mixed race. Three women had never been sexually active. Twenty-nine women were nulliparous and 18 were parous.

9 Parity ranged from 1 to 8, with a mean of [ ]. Eleven women were taking systemic hormones, such as oral progestogens or the combined oral contraceptive pill. The range, mean and standard deviation for all measure- ments are displayed in Table 1. There was no statistically significant association between any of the different genital measurements and age, parity, ethnicity, hormonal use or history of sexual activity. DISCUSSION. In general, there are surprisingly few descriptions of normal Female genitalia in the medical literature. In con- Fig. 1. Picture showing location of measurements taken from Female trast, measurements for male genitals are widely available perineum. and were published as early as There have been a D RCOG 2004 BJOG: an International Journal of Obstetrics and Gynaecology 112, pp. 643 646. Female genital appearance 645.

10 Few reports on clitoral size12,13 and vaginal length,14 but association is conspicuous by its Moreover, very little information on labial size or other aspects such given the variety of normal Female genital appearance and as genitalia colour and rugosity. Recent important work has lack of normative data, it can be surmised that decisions focussed upon the internal size, position and relationships regarding the amount of reconstruction needed are entirely to surrounding structures of the clitoris following postmor- subjective. It is therefore surprising that surgeons feel tem dissections of external Female genitalia rather than confident that surgery has the potential to achieve a upon the external normal' Female genital appearance . Parents should be The current study demonstrates wide variations in all educated about the wide variations in both the appearance the parameters assessed. 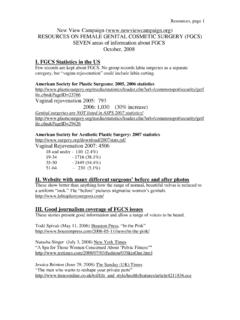 I. FGCS Statistics in the US - New View Campaign 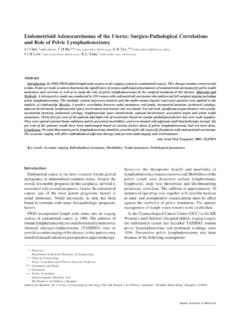 Endometrioid Adenocarcinoma of the Uterus: …

4 • Provide a broad outline of Mediclinic's business • Setting the scene for further engagements • Await outcome of data, information and profitability 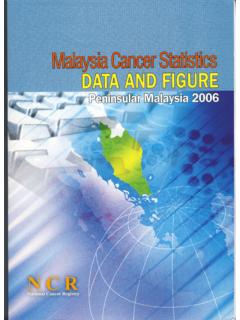