Fermentation Analysis of Silage: Use and …

Fermentation Analysis of silage : Use and Interpretation Ralph T. Ward 1. Cumberland Valley Analytical Services, Inc. , Hagerstown, MD. Mary Beth de Ondarza Paradox Nutrition, LLC, West Chazy, NY. Introduction Animal productivity is dependant on the nutrient composition of the ration presented to the animal as well as on the quality of feed ingredients. In assessing animal productivity the nutritionist must determine if the ration is the factor limiting productive potential. In order to do this one must have an accurate assessment of feed quality and delivery. Having as complete a set of information on the feeds and delivered ration as possible will assist the nutritionist in making this determination and allow for the identification of limiting factors. Often the nutritionist or consultant is challenged to push animal performance beyond what may be an undetermined performance barrier established by feed quality and delivery issues.

1 Fermentation Analysis of silage : Use and Interpretation Ralph T. Ward 1. Cumberland Valley Analytical Services, Inc. , Hagerstown, MD. Mary Beth de Ondarza Paradox Nutrition, LLC, West Chazy, NY. Introduction Animal productivity is dependant on the nutrient composition of the ration presented to the animal as well as on the quality of feed ingredients. In assessing animal productivity the nutritionist must determine if the ration is the factor limiting productive potential. In order to do this one must have an accurate assessment of feed quality and delivery. Having as complete a set of information on the feeds and delivered ration as possible will assist the nutritionist in making this determination and allow for the identification of limiting factors. Often the nutritionist or consultant is challenged to push animal performance beyond what may be an undetermined performance barrier established by feed quality and delivery issues.

2 This paper will review the evaluation of forage Fermentation . This is one key aspect of forage quality. Specific information provided on averages and ranges for various feed nutrients and quality assessments were determined by Cumberland Valley Analytical Services, Inc. (CVAS). by wet-chemistry. The dataset is representative of feeds from across the United States. Use of Fermentation Analysis There are those that argue that while the Fermentation Analysis is interesting, it is of little value, providing no information that can be used directly in the ration balancing process. While it is generally true that the Fermentation data have little direct application, this challenge avoids the true value of the Analysis . The Fermentation report is meant to provide a comparative evaluation that allows the user to better characterize the silage , and to lend insight into possible DM intake and performance problems. A silage at 30% DM that has butyric acid and 18% ammonia nitrogen as a percentage of total nitrogen will be utilized differently than a silage at the same DM.

4 Quality forage is the basis of profitable animal production. The type and degree of Fermentation will significantly affect the amount of DM recovery from the silage making process. 1. Cumberland Valley Analytical Services, Inc., 14515 Industry Drive, Hagerstown, MD 21742, (301) 790-1980, Email: 1. silage Fermentation Basics The number one goal of silage making is to reduce oxygen and increase acidity rapidly so that lactic acid bacteria grow to stabilize and preserve or pickle the forage. By 2-3 days after ensiling, cell juices are available as a food source for silage bacteria, oxygen should be eliminated, and silage pH should have declined to a level at which the lactic acid bacteria can grow ( ). The lactic acid bacteria begin to multiply, make lactic acid (C3H6O3) and some acetic acid (C2H4O2), and increase silage acidity. After about six weeks, silage should reach a final low pH ( in legume silage and in corn silage ).

5 Herbage that is ensiled properly exhibits rapid pH drop where homo-fermentative bacteria predominate. Lactic acid should be a significant end-product of these fermentations. Fermentations that yield more lactic acid typically result in the lowest dry matter losses. Silages that have high levels of acetic, propionic, butyric or iso-butyric imply conditions where DM. recovery from the silage making process may be poor. Generally, in well-preserved silage , at least 65-70% of the total acid will be lactic acid or 4-7% lactic acid (%DM). Acceptable silages generally contain <3% acetic acid, < butyric acid, and < propionic acid. Figures 1 and 2 show the Fermentation acids by DM range for corn silage and legume silage analyzed at CVAS. in 1999-2000. High Moisture Silages The amines and acids that are produced in greater quantities during the Fermentation of wet silages can depress intake. When researchers added acids or silo effluent to forage, they decreased intake by as much as 40%.

6 One study ranked the intake potential of grass stored as hay at 78%, dry silage (>40% DM) at 86%, and wet silage (<30% DM) at 68%. Intake of frozen (then thawed) chopped corn was found to be 10% higher than the same corn as silage (Erdman, 1993). Highly Fermented High Moisture Silages High levels of silage acids indicate that an extensive Fermentation occurred in the silo. Many feeding situations utilize silages with high acid content with no apparent problems. Feed bunk management, ration parameters, and associative effects of feedstuffs often determine whether high silage acid levels may be a problem in any given feeding situation. silage acids are neutralized by the cow's own saliva or by supplementary buffers in the ration. If these silage acids are not neutralized, they will contribute to the total acid pool in the rumen. Increasing the lactic acid content of grass silage increases the loading of lactic acid in the rumen, but little of this acid probably accumulates because it is degraded by the rumen lactate-utilizing bacteria and transformed into volatile fatty acids.

7 Unless the ruminal capacity to degrade lactic acid is compromised, high lactic acid levels in silages should not cause a significant increase in ruminal lactic acid concentrations and should not increase rumen acidosis. Much greater quantities of acid are produced by the rumen Fermentation , especially when lush grass or high grain diets are fed. Addition of supplemental buffers such as sodium bicarbonate or sodium sesquicarbonate can help to reduce silage acid levels going into the cow. In studies with early lactation cows at the University of Maryland, when corn silage was neutralized with a buffer before feeding, cows ate pounds more of it per day and produced pounds more milk per day (Erdman, 1993). If forage nutrients are converted to acids in the silo, less energy remains for the cow to use. Not all nutrition models would actually predict this energy loss when calculating ration energy. With high acidity silage , it may be important to do so.

8 There are differences in the utilization of 2. Fermentation acids by the rumen. Acetic acid is not fermented in the rumen, whereas one form of lactic acid is fermented by rumen bacteria under normal conditions (Muck, 1998). Although higher lactic acid levels are usually considered to be better for silage preservation, lactic acid may be a problem in silages where it exceeds ten percent of DM. This rarely happens in North America but is more common in Europe. When wet grasses (<30% DM) with a high amount of sugar are ensiled, perhaps as direct-cut silage , they can undergo an extensive silo Fermentation and can contain high levels of lactic acid. In one study with direct-cut ryegrass silage , it had a pH of and lactic acid (McDonald, 1991 as cited by Harrison et al., 1994). Wet silages that have undergone a long Fermentation sometimes contain higher levels of acetic acid (>3% DM). Ammoniated silages also often have higher levels of acetic acid because of their longer Fermentation (Kung and Shaver, 2001).

9 Acetic acid smells like vinegar. Very high levels of acetic acid (>5% DM) have been suggested to cause intake problems, however research has not consistently found this to be true and the mechanism by which acetic acid might compromise intake is not understood (Seglar and Mahanna, 2001). The acetic acid itself may not be a problem, but may be a marker. Silages treated with Lactobacillus buchneri for improving aerobic stability often have higher levels of acetic acid but, in this case, it doesn't seem to cause any problems (Kleinschmit et al., 2005, Kung et al., 2003). These silages often exhibit the presence of an alcohol, 1,2 Propandiol, at levels from to 3% DM. Propionic acid levels are typically very low in silages (< DM) but addition of propionic acid as a silage preservative (2 to 4 lbs/ton) raises propionic acid levels up slightly ( DM) (Kung and Shaver, 2001). Propionic acid has a sharp sweet smell and taste.

10 Poorly Fermented High-Moisture Silages -- Clostridial Fermentations Forages ensiled at less than 32% DM have a greater risk for clostridial growth. Clostridia bacteria are one of the most common undesirable bacteria that may persist in unstable silage that has no oxygen. They produce butyric acid and break down protein. Butyric acid smells like rancid butter and silage often has an olive green color after a clostridial Fermentation . Clostridia usually are associated with hay-crop silage that has a pH of With clostridia, there will be higher silage dry matter losses, poor silage palatability, and a higher level of ammonia nitrogen. It is suspected that the protein breakdown products, such as ammonia, amines, and amides, may be responsible for limiting intake. Butyric acid itself may not significantly impact intake, but may be a marker for protein degradation products. Tveit et al. (1992) found that the correlation between amine concentration and butyrate was very low (< ). 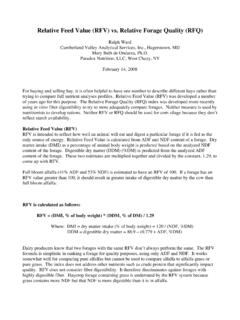 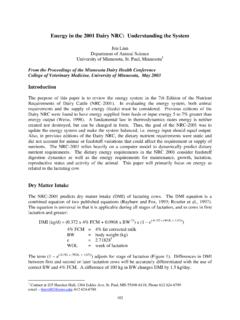 Energy in the 2001 Dairy NRC: Understanding the System

Energy in the 2001 Dairy NRC: Understanding the System Jim Linn Department of Animal Science University of Minnesota, St. Paul, Minnesota1 From the Proceedings of …