2 Patricia Salda a Natke, AIA, President and Design Principal of UrbanWorks Kris Sorich, Associate ASLA, Senior Landscape Designer with the Chicago Department of Transportation Bridget C. Stalla, , Civil Engineer with the Chicago Department of Transportation Arvin Villanueva, Civil Engineer at Terra Engineering, Ltd. Bill Wood, , Civil Engineer with SmithGroupJJR. 3. Learning Objectives: Gain awareness of the cultural diversity of three Chicago neighborhoods. See firsthand the differences and similarities between public Spaces in different ethnic communities in Chicago. Understand how to incorporate cultural aspects of a neighborhood into the design of public Spaces . Test the effectiveness of the design tools that have been applied to cultural landscapes. Learn about adapting residual Spaces for public use. Learn about working with brownfields. 4. Presentation Outline: A.

7 University of Chicago Press Ostrander, Stephen, 2015. Chinatown Community Vision Plan, CMAP. Panache Partners, LLC., 2008. City by Design: An Architectural Perspective of Chicago. 7. Maps and Additional Information: 8. Neighborhoods: Chinatown Photos source: city- Looking to escape the anti-Chinese violence that had broken out on the west coast, the first Chinese arrived in Chicago after 1869. when the First Transcontinental Railroad was completed. By the late 1800s, 25% of Chicago's approximately 600. Chinese residents settled along Clark Street between Van Buren and Harrison Streets in Chicago's Loop. In 1889, 16 Chinese-owned businesses were located along the two-block stretch. In 1912, the Chinese living in this area began moving south to Armour Square. Some historians say this was due to increasing rent prices. Others see more complex causes: discrimination, overcrowding, a high non-Chinese crime rate, and disagreements between the two associations ("tongs") within the community.

8 The move to the new South Side Chinatown was led by the On Leong Merchants Association who, in 1912, had a building constructed along Cermak Avenue (then 22nd Street). While the building's design was typical of the period, it also featured Chinese accents such as tile trim adorned with dragons. In the 1920s, Chinese community leaders secured approximately 50 ten-year leases on properties in the newly developing Chinatown. Jim Moy, then-director of the On Leong Merchants Association, decided that a Chinese-style building should be constructed as a strong visual announcement of the Chinese community's new presence in the area. Chicago-born Norse architects Christian S. Michaelsen and Sigurd A. Rognstad were asked to design the new On Leong Merchants Association Building in spring, 1926. They drew their final design after studying texts on Chinese architecture. When the building opened in 1928 at a cost of a million dollars, it was the finest large Chinese-style structure in any North American Chinatown.

9 It was often informally referred to as Chinatown's "city hall." In 1928, Michaelsen and Rognstad designed two other buildings in the area. During the late 1980s, a group of Chinatown business leaders bought 32 acres (130,000 m2) property north of Archer Avenue from the Santa Fe Railway and built Chinatown Square, a two-level mall consisting of restaurants, beauty salons and law offices, flanked by 21 new townhouses. Additional residential construction, such as the Santa Fe Gardens, a 600-unit village of townhouses, condominiums and single- family homes is still under construction on formerly industrial land to the north. Perhaps the most outstanding feature of the new addition was the creation of Ping Tom Memorial Park in 1999; located on the bank of the Chicago River, the park features a Chinese-style pavilion that many consider to be the most beautiful in the Midwest.

10 Pilsen Photo source: Accent Urban Design In the late 19th century, Pilsen was inhabited by Czech immigrants who named the district after Plze , the fourth largest city in what is now the Czech Republic. They replaced the Germans and Irish who had settled there first, in the mid-nineteenth century. The population also included smaller numbers of other ethnic groups from the Austro-Hungarian Empire, such as Slovaks, Slovenes, Croats and Austrians, as well as immigrants of Polish and Lithuanian heritage. Many of the immigrants worked in the stockyards and surrounding factories. Pilsen was home to both wealthy professionals and the working class, with the whole area knitted together based on the ethnicities, mostly of Slavic descent, who were not readily welcome in other areas of the city. Although there was some increase in the Hispanic presence in the late 1950s, it was not until the early 1960s that there was a great spurt in the numbers of Latinos in Pilsen. 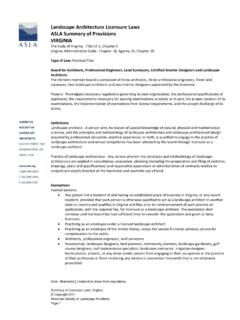 The thirteen-member board is composed of three architects, three professional engineers, ... Promulgate necessary regulations governing its own organization, ... 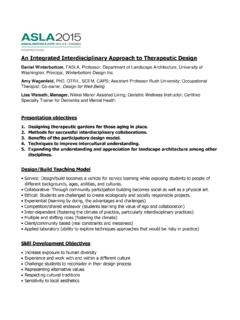 An Integrated Interdisciplinary Approach to … 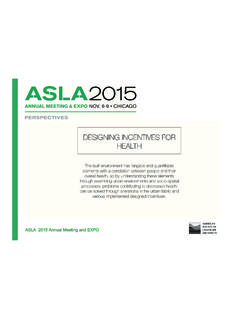 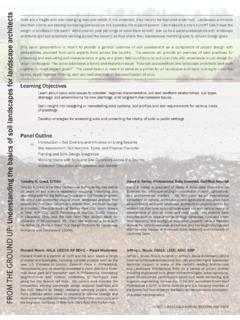 Understanding the basics of soil landscapes for …

FROM THE GROUND UP: Understanding the basics of soil landscapes for landscape archi tects Soils are a fragile and ever changing resource which, if not protected, may literally be trampled underfoot. 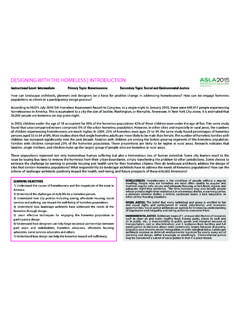 DESIGNING WITH THE HOMELESS | INTRODUCTION

DESIGNING WITH THE HOMELESS | INTRODUCTION How can landscape architects, planners and designers be a force for positive change in addressing homelessness? 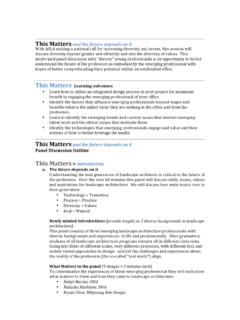 SAT A11 This Matters and the Future Depends on It … 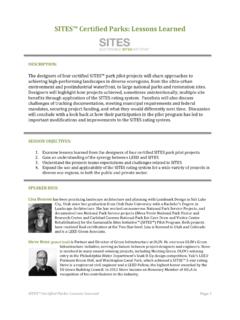 SITES™ Certified Parks: Lessons Learned Page 2. Jessica Brown. is a Landscape Architect at the National Park Service (NPS). She has a Master’s Degree in iry BOSTON Franklin Park 1875 A Park Act is passed by the legislature allowing the city to acquire lands for park purposes within the city of Boston and in cooperation with adjoining cities and towns. 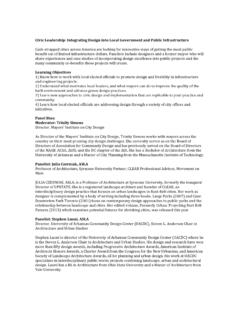 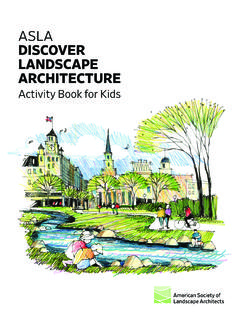 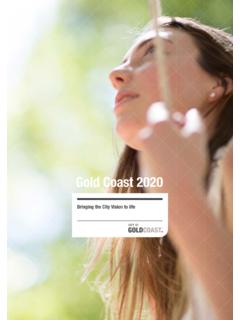 6 1.0 The best place to live and visit 7 1.1 Our city provides a choice of liveable places We can choose diverse lifestyle and housing options from rural to city living. 1.2 We live in balance with nature We manage quality rural and urban living while

Guidelines on urban and peri-urban forestry

ISSN 1999-2882 Guidelines on urban and peri-urban forestry Although cities occupy only 2 percent of the planet’s surface, their inhabitants use 75 percent of its natural 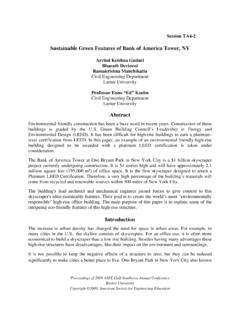 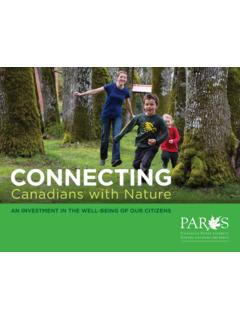 2 THE CURRENT SITUATION Our rich natural heritage is a source of deep pride for Canadians. Nature has shaped our history, our economy and our society. 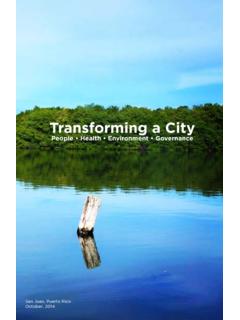 Turning Challenges into Assets As one of the wealthiest and most livable capital cities in the Caribbean, San Juan is full of con-trasts and possibilities. 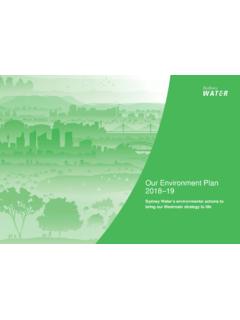 19 to meet our environmental objectives and targets our by 2020 and 2030. We update our Environment Plan every year to remain resilient against emerging environmental risks and to ensure that it reflects our business focus. 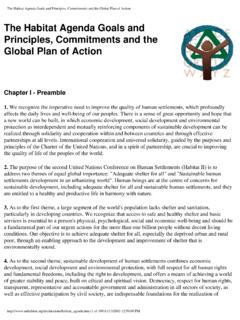 The Habitat Agenda Goals and Principles, …

The Habitat Agenda Goals and Principles, Commitments and the Global Plan of Action numbers of people while limiting their impact on the natural environment.