Athens, Georgia, 2014: An investigation by the student newspaper at the University of Georgia revealed numerous expired fire extinguishers on campus. A total of 57 fire extinguishers in the labs, classrooms, and hallways of 19 buildings were checked; 46 of the extinguishers were expired and had not been checked in more than a year. Annual

6 After the story came to light, a company was quickly contracted to start the process of checking, servicing, and replacing extinguishers. The Safety Division was also working to implement an electronic database to keep track of the extinguishers on campus. History has proven that early Detection of a fire and the signaling of an ap-propriate Alarm remain significant factors in preventing large losses due to fire . Properly installed and maintained fire Detection and Alarm Systems can help to increase the survivability of occupants and emergency responders while decreasing property losses (F i g u r e 14 .1).Together with automatic fire suppression Systems , fire Detection and Alarm Systems are part of the active fire protection Systems found in many occupan-cies.

9 Such Systems are typically designed and installed by qualified individu-als as determined by the AHJ. The design, installation, and approval of a fire Detection and Alarm system may also require acceptance testing by regulatory agencies before new buildings are occupied or the system is placed in design and installation of the fire Detection and Alarm system should conform to applicable provisions of NFPA 70, National Electrical Code , and N F PA 72, National fire Alarm and Signaling Code, and locally adopted codes and ordinances. Other standards also apply to the installation of these Systems and are addressed later in this chapter within the discussions of the various types of Systems .

10 Each of the following sections highlights a basic component of a fire Detection and Alarm Alarm Control UnitsThe fire Alarm control unit (FACU), formerly called the fire Alarm control panel (FACP), contains the electronics that supervise and monitor the integrity of the wiring and components of the fire Alarm system . The FACU basically serves as the brain for the Alarm system (F i g u r e 14 . 2). It receives signals from Alarm -initiating devices, processes the signals, and produces output signals that activate audible and visual appliances. The FACU also transmits signals to an off-site monitoring station when provided. 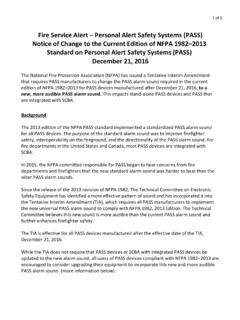 The National Fire Protection Association (NFPA) has issued a Tentative Interim Amendment that requires PASS manufacturers to change the PASS alarm sound required in the current edition of NFPA 1982–2013 for PASS devices manufactured after December 21, 2016, to a