fire Testing of Foams The following Technical Information Pamphlet (TIP) examines fire /Flammability Standards relevant to Cross-linked Polyethylene (XLPE) and Ethylene Vinyl Acetate containing Foams . Introduction Almost every application that uses XLPE Foams has its own fire standards. Each country's governing safety boards define their own standards. There are some "Internationally recognized" standards that are accepted for a number of fields (even though they were perhaps designated for one particular one), but until a unified "Euro-Standard" (or even, "World-Standard") is accepted, people in industry have to be aware of all of the possibilities that might confront them.

1 fire Testing of Foams The following Technical Information Pamphlet (TIP) examines fire /Flammability Standards relevant to Cross-linked Polyethylene (XLPE) and Ethylene Vinyl Acetate containing Foams . Introduction Almost every application that uses XLPE Foams has its own fire standards. Each country's governing safety boards define their own standards. There are some "Internationally recognized" standards that are accepted for a number of fields (even though they were perhaps designated for one particular one), but until a unified "Euro-Standard" (or even, "World-Standard") is accepted, people in industry have to be aware of all of the possibilities that might confront them.

2 There are also a couple of standards that were developed for particular materials and are used (often incorrectly) to test other types of materials. It is important that the customer and manufacturer agree on WHAT EXACTLY IS REQUIRED prior to ordering the wrong material. The flame retardant additives that are most often used in XLPE foam materials are Halogenated Hydrocarbons combined with an Antimony Trioxide synergist. Recent European rulings have banned the use of some of these materials and particularly for Electrical and Electronic applications, the terms "RoHS" and "RoHS compliant" are being heard more and more.

4 5 samples are tested. The production of flaming droplets is determined by a piece of filter paper being placed below each specimen during Testing . A B2 classification is achieved if the tip of the flame does not reach a reference line marked on the foam within 20 seconds (150mm for bottom edge application, 40 and 190mm from the lower edge for face or side application). Pipe insulation is one application where DIN4102 is the "standard" fire test fire shaft test DIN 4102 B1 BS 476 Part 6/7 (British) The British "Standard" 476 is actually a series of fire standards.

5 Part 6 and 7 are Surface spread of flame tests (these are to prevent fire spreading to adjoining buildings). These standards are used in construction for the UK, British Commonwealth and countries that were previously part of the British Empire. BS 476 Part 7. Surface spread of flame This test shows how the spread of flames across the surface of a material gives an indication as to its ability to spread fire . The sample is mounted in a water-cooled holder and exposed to the radiant panel for 10 minutes with a pilot flame applied for the first minute of the test.

6 The progression of the flame front is measured after 11/2 minutes and at the end of the test. The test grades material from 1 (best) down to 4 (worst). B1- The samples are held vertically in a supporting frame within a square shaped vertical housing (the Brandschafht , or fire schaft). A gas burner subjects the samples to flames for 10 minutes. At the same time a constant, uniform flow of air is blown into the Brandschacht from below. In evaluating the test, smoke gas temperature and the length of the specimen which has escaped burning (residual length) are taken into account.

7 For a B1 classification foam must show: 1. A mean residual length of not less than 150mm, with no specimen being burned away completely. 2. A mean smoke gas temperature of less than 200oC. BS 476 Part 6. fire Propagation This test measures the rate of heat release during combustion. Heat release during combustion will affect the rise in temperature of the surrounding un-burnt material and the subsequent rate of spread of fire . The sample is mounted and subjected to 14 gas jet flames at intervals across the sample width. Two electric heaters generate a high background temperature. The temperature rise is measured using thermocouples and compared with the rise obtained with a standard asbestos cement board specimen.

8 "Class 1"- CSE RF 2/75 A / CSE RF 3/77 - Surface application and spread of flame test ( Italy) To achieve an overall classification a small burner ignitability test (CSE RF 1/75 A or CSE RF 2/75 A) must be conducted together with a surface spread of flame test (CSE RF3/77). The results of both tests are then used to determine an overall classification, from Class 1 (the best) to Class 5. CSE RF 2/75 A uses surface application of a small flame for 30 seconds. After flame time, afterglow time, extent of damage and flaming droplets are observed and recorded these parameters are then divided into three grades, as shown in the table below: Air conditioning duct insulation in Italy has the requirements of "Class-1".

10 The position of the sample is varied to simulate end use in floors, walls and ceilings. Parameters measured are the rate of spread of flame , extent of damage, afterglow and flaming droplets, which are again divided into three grades. The category on which classification is based is worked out by multiplying the different grades with various weighting factors, which for flaming droplets are distinguished between floor, wall and ceiling use. The categories from the different tests then form the basis for classifying products. The French test known as the "Breleur electrique" - electric burner - is the principal method used not only in France, but also in Belgium, Spain and Portugal. 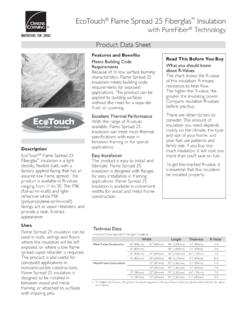 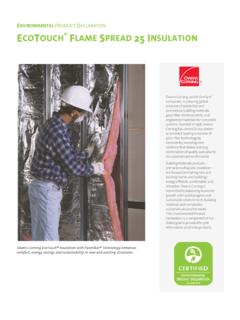 Page 2 of 3 EcoTouch® ®Flame Spread 25 FIBERGLAS™ Insulation with PureFiber Technology FSK and PSK Faced Fiberglass Insulation Batts According to ISO 14025 This declaration is an environmental product declaration (EPD) in accordance with ISO 14025. 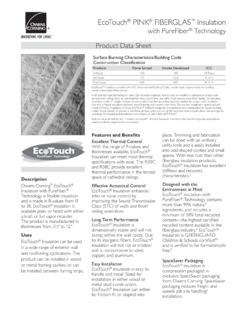 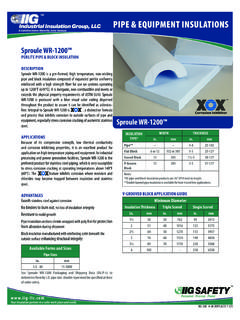 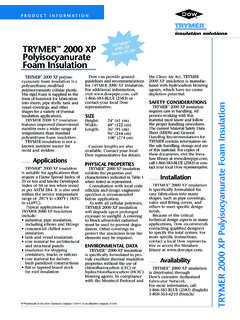