Floatback and Float-Forward: Techniques for Linking Past, Present and Future Cindy Browning ( worksheet by William Zangwill). The standard EMDR protocol calls for targeting the past origins of a disturbance, present day triggers and creating templates for appropriate behavior in the future (Shapiro, 1995). Some clients, however, may have difficulty connecting their current problems to past events. Similarly, other clients may have difficulty creating positive future templates, especially if the client is anxious about trying new behavior. For these problems the Floatback and Float-forward Techniques , developed by EMDR Institute Trainer, William Zangwill, , are effective methods for Linking past, present and future in the clinical setting and providing the therapist with tools for competently addressing both of these issues.

this point. Instead, say to your client, “Please bring up that picture of _____ and those words _____, (repeat client’s disturbing image and negative cognition), notice what feelings are coming up for you, and where you are feeling them in your body. Now close your eyes and let your mind float back to an earlier time in your life.

1 Floatback and Float-Forward: Techniques for Linking Past, Present and Future Cindy Browning ( worksheet by William Zangwill). The standard EMDR protocol calls for targeting the past origins of a disturbance, present day triggers and creating templates for appropriate behavior in the future (Shapiro, 1995). Some clients, however, may have difficulty connecting their current problems to past events. Similarly, other clients may have difficulty creating positive future templates, especially if the client is anxious about trying new behavior. For these problems the Floatback and Float-forward Techniques , developed by EMDR Institute Trainer, William Zangwill, , are effective methods for Linking past, present and future in the clinical setting and providing the therapist with tools for competently addressing both of these issues.

2 The Floatback Technique Addressing earlier memories associated with disturbing material is fundamental to EMDR. Shapiro states that helping the client to find an earlier memory should be one of the first options considered by the clinician (Shapiro, 1995 ). The Floatback Technique is a powerful and efficient means to this end, allowing the therapist to assist the client to make his or her own associations to past events. It is highly appropriate for use when the client is experiencing a disturbance in the present that the therapist suspects is rooted in past experiences, especially when direct questioning such as, What is your earliest memory of feeling this way? have not succeeded in helping the client make a connection to past events.

3 Also, when a client presents a theme or recurring experience, the Floatback Technique is ideal for helping the client to identify a salient target for reprocessing. Many clients find it relatively easy to get in touch with current problems. For example, a client who complains that she feels abandoned when her husband leaves briefly on a business trip can probably be asked to bring up the most recent of these events with relative ease. The therapist can then apply the Floatback Technique to help the client make the association to an earlier event rapidly and efficiently. To use the Floatback Technique, set up the present disturbance using the procedural steps listed in the Level I and Level II training manuals (Shapiro, 1994; Shapiro, 1996) including image, negative cognition (NC), positive cognition (PC), validity of cognition (VoC), emotions, subjective units of disturbance (SUDs), and location of body sensation.

4 However, do not initiate processing ( , eye movements or other stimulation) at this point. Instead, say to your client, Please bring up that picture of _____ and those words _____, (repeat client's disturbing image and negative cognition), notice what feelings are coming up for you, and where you are feeling them in your body. Now close your eyes and let your mind float back to an earlier time in your life. Don't search for anything, just allow your mind to drift back to a time when you had similar thoughts of _____. (repeat emotions above), in your _____ (repeat places in the body where they reported sensation). And when you're ready, open your eyes and tell me the first thing that comes to your mind.. Set up this earlier experience as a target complete with image, NC, PC, VoC, emotions, SUDs and location of body sensation, and, start processing with eye movements or other stimulation.

5 Once this earlier material is reprocessed, go back and check the original present-day target. Often the work on the earlier material will generalize and may render the processing of the present-day target unnecessary. It is important to use general language when guiding the client through the Floatback instructions, , to ask for earlier rather than earliest memories. There are several reasons for this. Firstly, it is often the worst rather than the first memory that makes the most salient target for reprocessing. Also, using general language is helpful to the more compulsive and perfectionistic clients who may otherwise be overly concerned about doing it correctly and finding exactly the first association. Finally, the flexibility allowed by general rather than specific language maximizes the client's chances for success in making an association to the past, which is the goal of this technique.

6 The essential feature of the Floatback Technique is using the EMDR procedural questions to connect present problems with past events. Asking the questions as developed by Shapiro is a potent method for helping clients to tune into all aspects of their experience of the problems. The upsetting material becomes more vivid and present for the clients and sets the stage for recalling similar experiences. Fully delineating the present-day target by using the procedural questions if hypothesized to stimulate the neural network of associations, making it possible, and often nearly effortless, to float back to the earlier association. Additionally, the client-therapist bond is enhanced since the clinician can validate the client's experience (the present-day disturbance) by starting where the client is.

7 The associations made come from the client, thus eliminating the issue of resistance to ideas or interpretations introduced by the therapist. The client comes to experientially know the connection of present to past using the Floatback Technique, again sidestepping avoidance and other defenses. The Float-Forward Technique While the Floatback Technique often enables clients to see and feel the connection between present problems and past events, the Float-forward Technique allows clients to identify and reprocess anticipatory anxiety and create positive future templates. It is a method that can be used at any time during the therapy process to address blocks, reluctance and, in some cases, resistance or secondary gain/loss issues. It is especially useful for targeting the client's fear of doing EMDR and should be considered before assigning tasks.

9 Then proceed with the remainder of the questions along standard lines, , NC, PC, VoC, emotions, SUDs and location of body sensation. Facilitate the client's processing of the target using eye movements or other stimulation. If developing the client's worst case scenario elicits a fear that is rational, then practical measures may be needed to address these concerns. For example, using the Float-forward technique with a 13-year-old boy in foster care elicited a worst case scenario of I will be returned to the shelter if my current placement doesn't work out. During processing, his SUDs were reduced from 8 to 3 rather quickly but would not move lower. The client observed that it could not go lower because this worst case scenario could actually happen to him and had happened in the past.

10 We discontinued the eye movements, debriefed, and made a plan for a) a session with his foster parents to discuss the permanence of the placement and b) a conference call with his legal advisor to clarify his rights and options. Returning to the target afterwards, he was able to reduce his SUDs to 1 with just a few sets of eye movements. Using the Float-forward Technique to reprocess the worst case scenario, the client is given an opportunity to resolve the anticipatory anxiety. During the installation of the PC, the client is essentially creating positive templates for future action. A woman whose brother was verbally abusive in childhood an intimidating in the present day had a worst case scenario of He'll be just as verbally abusive when I see him next time. 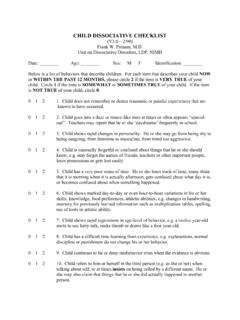 CHILD DISSOCIATIVE CHECKLIST (V3.0 – 2/90) Frank W. Putnam, M.D. Unit on Dissociative Disorders, LDP, NIMH Date: _____ Age: _____ Sex: M F Identification: _____ Below is a list of behaviors that describe children. For each item that describes your child NOW or WITHIN THE PAST 12 MONTHS, please circle 2 if the item is VERY TRUE of your

DEVELOPING AND ENHANCING A CALM/SAFE PLACE

DEVELOPING AND ENHANCING A CALM/SAFE PLACE Use other coping skills if more appropriate (container, focus, courage, etc.) IMAGE "I'd like you to think about some place you have been or imagine being that feels very calm or safe.

With the desensitization of each triggers and the installation of the positive treatment goal the client’s ego strength seems to grow to a point where threads open leading back to core issues (if they arise) but only after sufficient ego strength is built. Once desensitized triggers are no longer the stimuli for using.

The Adult Attachment Interview and Questionnaires for ...

attachment figures (the Strange Situation: Ainsworth, Blehar, Waters, & Wall, 1978) led to an explosion of research in that area. However, halfway through the 1980s, George, Kaplan, and Main (1985) developed the Adult Attachment Interview (AAI) , which enable d researcher s to assess attachment representations in adolescence and adulthood äs well.

Connecting your ideas: Linking words What are linking words and what are they for? Cohesion and clarity are essential elements of academic writing. Making the connections between your ideas clear and visible can help achieve clear communication as it will be much easier for the person reading to follow what you are 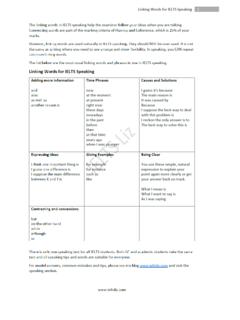 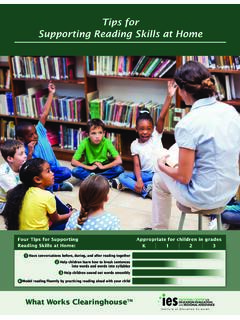 examples of how to show breaking words into syllables: 1. Place your hand under your chin and ... Recognizing and manipulating sounds that are part of words and linking those sounds to letters is necessary to ... It requires children to identify words quickly, combine ideas in the book with their background knowledge, ask ... 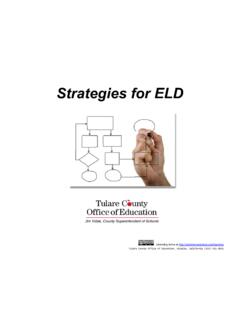 connected using linking words and phrases, and how these words impact tone ... another , etc., to link sentence or paragraphs pronouns connecting back to nouns ... summarize key ideas in the text. Class discusses what the ...

How to structure an essay

Main body of your essay Develop your core ideas through the main body of the essay. You need paragraphs, sections and links. In a short assignment e.g. 1000 words or less, the structure of your essay is built only through your paragraphs. Longer assignments, over 2,000 words, will often be easier to organise

Now you know the main ideas of the text and the overall structure. You’ve also looked at the meaning of some unfamiliar words. But a lot of the “little” words also do a very important job in the text by connecting ideas and making these connections clear for the reader. Choose 2-3 sections of the text which you found quite clear.

Connecting Professional Development To Student Learning Gains ... complicates linking teacher learning to any one of the training experiences. However, these researchers feel that, ... In other words, if you start to see learning gains among the targeted student population, keep doing what you were doing.