Dedicated to the extreme e ka r et v Ne ‘ your eye off the ball’ When it comes to LNG, we know the drill. Safety comes first. That’s why our crews not only

2 Quite aside from the fact that there was no option available to extend the lease, it photographs, will be featured in the had become clear that we needed larger Autumn 2018 edition of SIGTTO News. premises and facilities to accommodate our SIGTTO has delivered Quite apart from the office move, SIGTTO. expanding Secretariat team. We would have six paid publications has a busy schedule of meetings arranged needed to find new premises in any case. for 2018. The 12-month programme features When SIGTTO moved into St Helen's in the last three and 10-11 Regional Forums, a Panel Meeting and Place in April 1993, a drinks reception was a half years and has two meetings each of the General Purposes held on the Friday evening to celebrate the three more scheduled Committee (GPC), the Board of Directors office move.

3 The following day, Saturday and the Human Element Committee (HEC). >. the 24th of April, the Bishopsgate bomb for publication in the exploded near the entrance to St Helen's next 12 months.. Place, causing widespread damage. IN THIS ISSUE. Although no one from the Secretariat Message from General was in the office at the time, all the buildings well underway, and the search has been Upcoming SIGTTO in the immediate area suffered substantial concentrated within the immediate vicinity of General Purposes damage and we were not permitted the current office, in the City of London.

4 We Floating LNG Installations access to our premises for several weeks are seeking a new office that is considerably afterwards. Those were the days before larger than the existing one, to provide space Rob Farmer new technical computers had become essential to everyday for more staff, as specified in the Society's office life and paperwork still reigned Strategic Plan 2020, as well as a much larger IMO developments ..6. supreme. As a result of the bomb, several meeting room than is currently available. Floating regas vessel of the projects with which SIGTTO was An appropriately sized conference Royal engaged at the time were delayed because room will enable us to host meetings of From the Archives IHI-SPB key documents remained out of reach.

5 Our working groups and other SIGTTO Three ship/shore interface Over our 25-year tenancy at St bodies, such as the Human Element Helen's Place the Society has had six Committee, within our own premises, Human Element general managers and 16 technical something that is not currently possible. Reunion with LNGC advisers. These SIGTTO officers are We expect to be in the new office HR Wallingford technical shown in the table on page 3. by this coming summer. Full details Smit Lamnalco The hunt for new premises is currently of the new premises, including SIGTTO NEWS - SPRING 2018 1.

6 Oleksandr Kalinichenko/Shutterstock LEADING THE WAY IN. MARINE SOLUTIONS. ABS is a marine classification leader. The depth and breadth of our experience across all major sectors of the industry is unparalleled. Our team of knowledgeable, experienced professionals is helping members, clients and industry stakeholders around the world find solutions to technical and regulatory challenges. We offer practical answers today as we prepare for tomorrow's challenges, providing help for every phase of the project life cycle. Contact us today to learn more about how ABS is developing practical and sustainable solutions.

7 LEADING CLASS INTO THE FUTURE. MESSAGE FROM GENERAL MANAGER. > SIGTTO's major event of the year will be the 64th Panel Meeting which will SIGTTO general managers and take place in London on 11-12 April. The In 2017 the in-service technical advisers during the Panel will be very kindly hosted by Smit LNG carrier fleet 25-year St Helen's Place tenure Lamnalco and there will be a technical passed the 500-ship visit to HR Wallingford on 13 April. General managers The Society is also looking forward mark and logged From moving in to July 1995 Bruce E Keer to the Gastech 2018 conference and its 90,000th safely July 1995 to July 1998 Alain P Vaudolon exhibition in Barcelona in September.

8 As delivered cargo. July 1998 to February 2003 John L Gyles usual, we will be sharing an exhibition February 2003. stand with Witherbys, our publishers, to May 2007 James MacHardy but this year our two organisations have not have been accomplished without May 2007 to agreed to book a much larger space the contribution of the Society's November 2012 William S Wayne than has traditionally been the case. members through their participation November 2012. In December 2017 we hosted the in the various working groups that to moving out Andrew M Clifton third Liquefied Gas Senior Executive developed these publications.

9 Forum in Houston, together with the US SIGTTO's HEC and GPC are continuing Technical advisers Coast Guard (USCG) and the Society their good work under the respective July 1993 Ken Sprowles (Shell). for Gas as a Marine Fuel (SGMF). Riviera chairmanships of Teekay's John Adams June 1994 John Cummings (Shell). Maritime Media provided assistance and Mark Hodgson of Shell. The robust January 1997 Roger Roue (BG). with the organisation of the event, structures and strategies that have been December 1997 Marc Hopkins (BP). which proved to be a great success, established and put in place for both December 2000 Gary Dockerty (Shell).

10 With over 180 delegates participating. committees have resulted in greater April 2002 Chris Snape (Shell). See page 6 for further information levels of productivity and efficiency. April 2004 Andrew Clifton (Golar). about the Senior Executive Forum. I look forward to continuing to serve December 2005 Paul Steele (BP). In addition to this meeting, 2017 finished SIGTTO's members in 2018 during this December 2007 Andy Murray (Chevron). with a flurry of December Regional very exciting time for our industry. In September 2008 Teo Popa (Golar). Forums, in Houston, Shanghai and Perth. 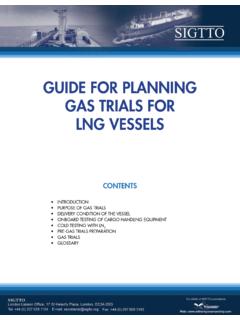 A Justification into the Use of Insulation Flanges …

Into, Flange, Insulation, Justification, A justification into the use of insulation flanges 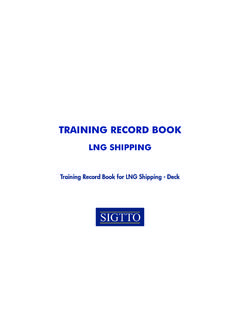 2 Training Record Book This document is provided as an example of a training record book. Users are free to modify this document as required. 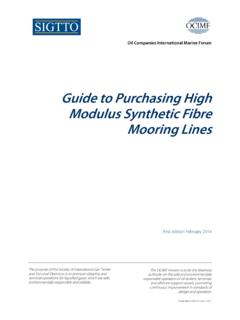 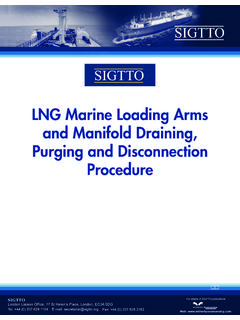 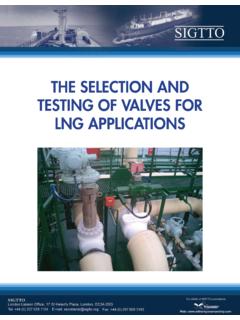 The SelecTion and TeSTing of ValVeS for lng … 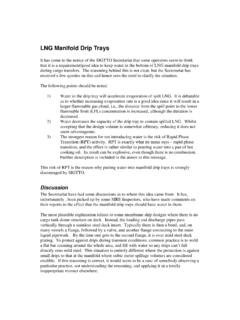 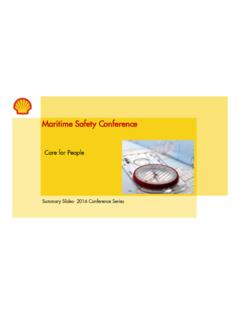