For Investment Professionals only Investment case: The UK private rented sector (PRS). The value of an Investment and the income from it can fall as well as rise and you may not get back the amount you originally invested. The UK PRS has doubled in size in the past decade and is increasingly attracting the attention of institutions including pension funds and insurers. There are now 95,918 Build-to-Rent homes complete, under construction or in planning across the We expect this figure to grow thanks to the sector's potential to generate a strong, stable income stream and proven diversification benefits. Our research suggests that the Investment case for UK PRS is backed by.

1 For Investment Professionals only Investment case: The UK private rented sector (PRS). The value of an Investment and the income from it can fall as well as rise and you may not get back the amount you originally invested. The UK PRS has doubled in size in the past decade and is increasingly attracting the attention of institutions including pension funds and insurers. There are now 95,918 Build-to-Rent homes complete, under construction or in planning across the We expect this figure to grow thanks to the sector's potential to generate a strong, stable income stream and proven diversification benefits. Our research suggests that the Investment case for UK PRS is backed by.

2 Low correlations with commercial real estate, A long-standing supply/demand imbalance in the equities and bonds UK housing market backed by strong population . Defensive characteristics with improved capital growth preservation Scope for professional investors to add value through PRS is the fastest growing tenure type active management and economies of scale is likely to fuel demand for rented accommodation . Demographics and demand a sector which was dominated by private landlords. Demographic trends suggest that demand for housing The PRS has been growing over the past decade, will continue to rise. The UK population is expected to and at million households now represents expand by around per annum in the medium term 20% of the English market,4 up from 10% in 2001.

3 In (2017-2026)2 much faster than the European Union addition, a significant proportion now see themselves average of just London is growing even faster. as permanent renters, with the 2015-16 English Housing At the same time, household size is continuing to fall, Survey suggesting that only 60% of the PRS households with more people living alone. surveyed expect to move into owner-occupation, with most only expecting to do so after five years or more. The government estimates that some 300,000 new homes need to be built annually. However, supply is The rising demand for private rentals in the UK. lagging behind, with 217,350 homes built in the 2016/17 contrasts with the situation in continental Europe, financial year.

4 Where in many countries the sector is now fully mature and has stopped growing or is even shrinking. Indeed, The resulting supply/demand imbalance means in a report by the London School of Economics and the upwards pressure on house prices over the long run. University of Cambridge, the UK was the only European Barriers to home ownership remain high, with significant country out of 11 studied where the general trend affordability constraints (particularly in London). This pointed to ongoing PRS growth. Housing supply in England Tenure over time (England). 300 Housing need 80. Tenure as a percentage of all households (%). Housing completions, England ('000s). 70. 250.

6 Reflecting the City's very strong underlying It has also fared well against other asset classes. fundamentals. However, some bigger regional cities are now drawing the attention of big players thanks Total returns by asset class to their potential for significant house price growth, 20. while others also look attractive from an Investment 18. perspective due to robust rental fundamentals. 16. London will no doubt continue to see the most 14. extreme supply/demand imbalances and the 12 greatest issues around housing affordability, therefore ensuring it should remain a fundamental (%). 10. 8. and, arguably, the most significant part of any investor's portfolio. However, selected major regional 6.

7 Cities are also suffering from similar challenges 4. and therefore offer the potential for healthy rental 2 growth. Cities such as Manchester and Bristol are 0 also seeing strong PRS growth, driven by population 1986-1996 1996-2006 2006-2016 30 years to 2016. Residential All Property Equities Gilts growth and housing affordability. This is putting pressure on housing prices, suggesting a healthy Source: IPD, Residential Digest, IPD Annual Digest, Bloomberg, ONS. outlook for rental growth. However, investors should be wary of overpaying for the income streams on While capital values in commercial property have offer in the regions, particularly as yields in some declined by 30% in real terms since 1980, those for cities start to rival London pricing despite the fact residential property have increased significantly, likely that their supply/demand imbalances are generally reflecting a combination of restricted supply and strong less acute.

8 Demand fundamentals. Going forward, our research forecasts healthy Investment performance for the UK PRS. basis. This is because the long-term income stream from residential can be maximised through more efficient Attractive rental growth prospects property management. The residential sector offers a strong stream of long-term Diversification benefits income, backed by attractive rental growth prospects as well as capital preservation and capital growth. Property has different market drivers to those of more We forecast average residential rental growth of traditional investments such as equities and bonds, pa in Greater London and the South East over the and consequently shows very low correlation with those next five years, supported by continued supply/demand asset classes.

9 Imbalances and continued economic growth. Multi-asset correlations The prospects for generating an income return from Residential Commercial residential are supported by the sector's lower level Equities Gilts real estate real estate of voids. In 2016, the vacancy rate for All Market Let Residential residential property was just over slightly below real estate that of commercial property or only for All Commercial Market Lets excluding central London. The length of real estate residential leases is shorter than in commercial, but the Equities gap is getting smaller. Although the standard initial lease length of an Assured Shorthold Tenancy (AST) is Gilts one year, the average actual tenancy is in fact years, according to the 2015-16 English Housing Survey.

10 Source: IPD UK Residential Property Index, IPD Annual Property Index, Bloomberg. (Inflation-adjusted total returns, 1981-2016). For private landlords and individual buy-to-let investors, management costs typically eat up around one-third of Analysis also suggests that residential could prove the income from privately rented residential. However, to be a suitable portfolio diversifier for commercial these costs can be reduced through the economies property investors, based on its much lower correlations of scale available to institutions and other large scale with most traditional property segments than those investors, compared to management on a flat by flat segments show with each other.

FOR INVESTMENT PROFESSIONALS ONLY - mandg.co.uk

FOR INVESTMENT PROFESSIONALS ONLY. Ben Jones Head of Real Estate Income M&G Investments Welcome Assets that produce predictable income are becoming ever more valuable for many long-term institutional investors in a world of low interest rates and volatile markets.

Professional, Investment, Only, For investment professionals only 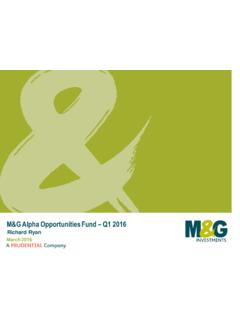 4 FOR INVESTMENT PROFESSIONALS ONLY For the addressee only. The distribution of this document does not constitute an offer or solicitation. Past performance is not a guide to future performance. 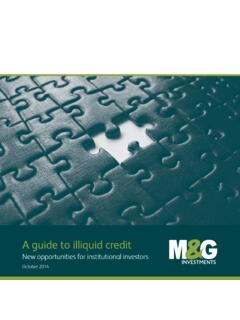 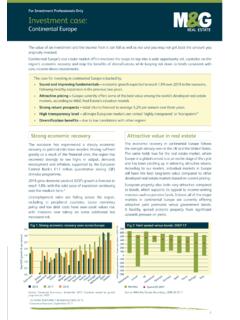