FOREIGN MILITARY SALES . By Derek Gilman, General Counsel Defense Security Cooperation Agency DIRECT COMMERCIAL SALES . By Robert Nichols, Partner Jade C. Totman, Associate Christine Minarich, Associate Covington & Burling LLP. September 30, 2014. DISCLAIMER. None of the content herein, nor the participation of the authors, implies government, Department of Defense , or Defense Security Cooperation Agency endorsement of any private entity or enterprise. Opinions expressed in this article are those of the authors, and do not necessarily represent those of the government, Department of Defense , or Defense Security Cooperation Agency. TABLE OF CONTENTS. Page INTRODUCTION ..1. FOREIGN MILITARY SALES ..2. I. An Overview of A. FMS Legal Authorities ..3. B. The FMS Letter of Offer and Acceptance ..4. C. FOREIGN MILITARY Financing for Purchases ..6. D. Other Financial Issues ..7. E. Nonrecurring Costs ..9. II. Other Programs Associated with FMS ..10. A. Other Security Assistance Programs Leases and Excess Defense Articles.

1 FOREIGN MILITARY SALES . By Derek Gilman, General Counsel Defense Security Cooperation Agency DIRECT COMMERCIAL SALES . By Robert Nichols, Partner Jade C. Totman, Associate Christine Minarich, Associate Covington & Burling LLP. September 30, 2014. DISCLAIMER. None of the content herein, nor the participation of the authors, implies government, Department of Defense , or Defense Security Cooperation Agency endorsement of any private entity or enterprise. Opinions expressed in this article are those of the authors, and do not necessarily represent those of the government, Department of Defense , or Defense Security Cooperation Agency. TABLE OF CONTENTS. Page INTRODUCTION ..1. FOREIGN MILITARY SALES ..2. I. An Overview of A. FMS Legal Authorities ..3. B. The FMS Letter of Offer and Acceptance ..4. C. FOREIGN MILITARY Financing for Purchases ..6. D. Other Financial Issues ..7. E. Nonrecurring Costs ..9. II. Other Programs Associated with FMS ..10. A. Other Security Assistance Programs Leases and Excess Defense Articles.

4 Hence, Contractors are increasingly seeking to sell products and services to these markets. There are two primary methods for doing so: government-to-government SALES through the Government's FOREIGN MILITARY SALES ( FMS ) program and similar mechanisms, and Direct Commercial SALES ( DCS ) negotiated directly between the contractor and the FOREIGN customer. Both methods have existed for decades, but a novice to international SALES has a steep learning curve regarding the complexities of each. Just how big is this market? From 2003 to 2006, government-to-government SALES administered by the Defense Security Cooperation Agency ( DSCA ), of which FMS. SALES are greatest part, were approximately $10-$12 billion per year; since 2006, however, annual SALES have repeatedly exceeded $21 billion, hitting $69 billion in 2012. And available data indicates that DCS SALES are even greater. In 2005, the value of DCS. deliveries eclipsed that of FMS deliveries by nearly a 3:1 margin.

5 1 From 2005 to 2009, DCS is estimated to have accounted for almost 60% of exported MILITARY articles almost $60 billion out of $101 Of this total, DCS was responsible for roughly 66% ( , $17 billion) of aircraft equipment and parts exports; roughly 80% ( , $15 billion) of satellites, communications and electronic equipment, and parts exports; and roughly 40% ( , $7 billion) of aircraft exports. 3. Of course, whether Contractors will retain their market share of international SALES is another question. FOREIGN Defense firms have become significant competitors for the Defense establishment. 4 This competition makes it even more important for Contractors to understand and actively navigate the rules governing FMS and DCS alternatives that are complementary, not rivals, but that have unique attributes. Accordingly, two threshold considerations for a FOREIGN country Purchaser or Contractor contemplating an international purchase/sale are (a) which option is available for a particular sale, whether FMS or DCS (or both); and (b) the advantages and disadvantages of each option.

6 As discussed below, FMS offers a total package approach that appeals to many Purchasers; alternatively, for eligible Defense articles and services, savvy Contractors and Purchasers might find greater flexibility in DCS to structure, negotiate, and execute contract terms that are tailored to their respective needs and goals. A decision as to whether to pursue FMS, DCS, or a combination of both, will likely depend upon the unique circumstances of each transaction, as well as the risks and challenges created by a complicated patchwork of relevant , FOREIGN , and international laws. This paper is divided into three sections. The first section, authored by Derek Gilman, the General Counsel of DSCA, presents an overview of the FMS process and legal issues relevant to FMS. The second section, authored by the Government Contracts practice group at the law firm Covington & Burling LLP, discusses the DCS process and legal issues relevant to DCS. The final section summarizes some of the considerations that Purchasers and Contractors may consider when choosing between FMS and DCS.

7 FOREIGN MILITARY SALES 5. I. AN OVERVIEW OF FMS. The FOREIGN MILITARY SALES (as defined above, FMS ) program has been a key component of FOREIGN policy and national Security for the last several decades. In 2. recent years, it has taken on increased importance, as the United States has sought to build the capabilities of FOREIGN partners to participate in counter-terrorist operations, and in operations in Afghanistan and Iraq. Further, the enactment of various building partner capacity authorities has resulted in increased reliance on the FMS process to implement so-called FMS pseudo cases. As noted above, SALES by the Department of Defense ( DoD ) have increased substantially over the past decade. The FMS program exists, not necessarily for the purpose of providing a market for Contractors, but for the purpose of building relationships with FOREIGN countries. This overriding purpose is codified into the statute governing the FMS program, the Arms Export Control Act ( AECA ), 6 which provides: Accordingly, it remains the policy of the United States to facilitate the common Defense by entering into international arrangements with friendly countries which further the objective of applying agreed resources of each country to programs and projects of cooperative exchange of data, research, development, production, procurement, and logistics support to achieve specific national Defense requirements and objectives of mutual concern.

8 To this end, this chapter authorizes SALES by the United States Government to friendly countries having sufficient wealth to maintain and equip their own MILITARY forces at adequate strength, or to assume progressively larger shares of the costs thereof, without undue burden to their economies, in accordance with the restraints and control measures specified herein and in furtherance of the Security objectives of the United States and of the purposes and principles of the United Nations Charter. A. FMS Legal Authorities The specific authorities permitting DoD to sell Defense articles 7 and services 8 to FOREIGN countries and international organizations are in section 21 and 22 of the AECA. 9. Section 21 of the AECA authorizes the President to sell Defense articles and services from the stocks of the DoD. This authority is often described as an authority to sell excess 3. Defense articles (Section 516 of the FOREIGN Assistance Act 10 provides an authority to grant excess Defense articles to FOREIGN countries).

9 Section 22 of the AECA provides the President with authority to enter into contracts for the procurement of Defense articles or services for sale for dollars to eligible FOREIGN countries and international organizations. These authorities have been delegated to the Director of the Defense Security Cooperation Agency (as defined above, DSCA ). 11. Of course, DSCA does not exercise these authorities in isolation. Pursuant to section 2 of the AECA, the Department of State must approve SALES of Defense articles and services to FOREIGN countries. 12 Furthermore, prior to the initial export to a country or international organization, the President must determine that the FOREIGN country is eligible to receive exports of Defense articles and services under the AECA. 13. Sanctions and export control laws also come into play. The recipient country must be eligible for exports at the time of the proposed export. Sanctions may be imposed under a variety of laws that prohibit exports for a range of reasons, including trafficking in persons and failure to make timely payments on debts owed the United States.

10 In addition to the country being eligible to receive exports, the Defense article or Defense service must also be approved for export; in that regard, the Government must determine that the technology can be exported to the country in question. B. The FMS Letter of Offer and Acceptance FOREIGN countries wishing to purchase Defense articles and services through FMS. must first provide a Letter of Request, or LOR. 14 There is no required form for the LOR, and it may take the form of a letter, request for proposal, or other written format containing sufficient information to provide a response. 15 Thus, the LOR can be issued as a sole source request, a single supplier request, or as part of a competition. Depending 4. upon the request in the LOR, the response may be Pricing and Availability ( P&A ). information or a Letter of Offer and Acceptance ( LOA ). An LOA is a government-to-government agreement governed by law. It is signed by representatives of the DoD and the FOREIGN government. 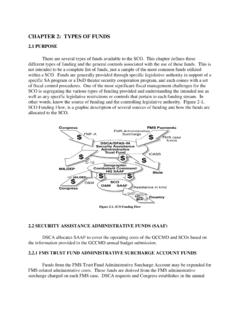 CHAPTER 2: TYPES OF FUNDS 2.1 PURPOSE There are several types of funds available to the SCO. This chapter defines these different types of funding and the general controls associated with the use of these funds. 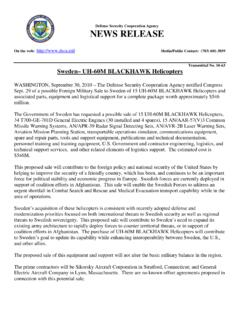 The purchase of UH-60M BLACKHAWK Helicopters will contribute to Sweden’s goal to update its capability while enhancing interoperability between Sweden, the U.S., and other allies. The proposed sale of this equipment and support will not alter the basic military balance in the region. 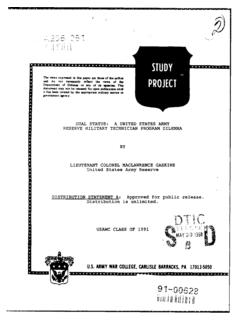 a program that is mandated by public law while the single requirement that makes the program unique is questioned by the program's work force and administrators. 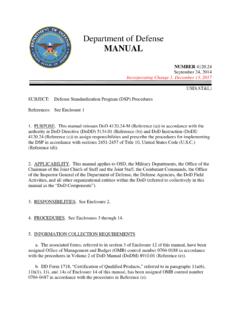 dod 5400.11-r department of defense privacy program may 14, 2007 office of the director, administration and management 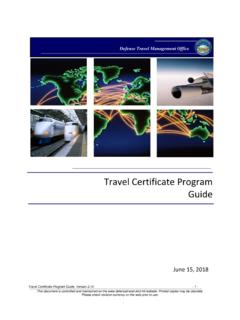 The Defense Travel Management Office manages the Travel Certificate Program in collaboration with the Component Planning Board, comprised of Service and Agency 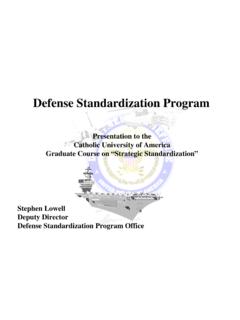