Formation of Chesil Beach: a review

Formation of Chesil beach : a review Dr Malcolm Bray Department of Geography University of Portsmouth August 2007. Abstract An account is provided of the discussion and debate associated with the developing scientific understanding of the origin and development of the beach . It lists some of the earlier theories before going on to consider further insights and refinements achieved in recent decades allowing a sequence of evolution to be formulated. It is thought that the precursor of the present beach developed within Lyme Bay as a linear transgressive barrier under the control of rising sea-levels of the mid to late Holocene. Critically, this beach then became nourished and reinforced by gravels delivered from eroding cliffs within central Lyme Bay that drifted eastwards. 1. Introduction Chesil beach is an internationally renowned feature of geomorphological and biological interest (Carr 1983a; 1983b).

2 2. Earlier Ideas on Formation Beach gravel clast lithology has led most authors to postulate a sediment source to the west, from Devon (Fitzroy 1853, Baden-Powell 1930).

1 Formation of Chesil beach : a review Dr Malcolm Bray Department of Geography University of Portsmouth August 2007. Abstract An account is provided of the discussion and debate associated with the developing scientific understanding of the origin and development of the beach . It lists some of the earlier theories before going on to consider further insights and refinements achieved in recent decades allowing a sequence of evolution to be formulated. It is thought that the precursor of the present beach developed within Lyme Bay as a linear transgressive barrier under the control of rising sea-levels of the mid to late Holocene. Critically, this beach then became nourished and reinforced by gravels delivered from eroding cliffs within central Lyme Bay that drifted eastwards. 1. Introduction Chesil beach is an internationally renowned feature of geomorphological and biological interest (Carr 1983a; 1983b).

2 It has been the subject of much research, discussion and conjecture and is regarded widely as one of the most important coastal geomorphological sites in Britain (May and Hansom, 2003). It is one of three major coarse clastic (shingle/gravel). structures on the British coast and is unique in being a linear barrier beach whilst the others (Dungeness and Orford Ness) exhibit cuspate development. Chesil beach is a linear storm barrier that extends for some 28km from West Bay to the cliffs of the Isle of Portland. It is joined to the mainland at the eastern and western ends, but for 13. km is backed by the shallow, tidal Fleet Lagoon. Detailed descriptions of the beach and comprehensive lists of references to previous research are provided by Carr and Blackley (1974); Jolliffe (1979); Carr (1980a); Bray (1996) Babtie Group (1997) and May and Hansom (2003).

3 The following links also provide detailed information on characteristics and the previous research conducted on the beach : Ian West, Geology of Wessex, University of Southampton: ~ SCOPAC Sediment Transport Study: Lyme Regis to Portland Bill: West Dorset Coast Research Group contains detailed information on storms, geology and research: 1. 2. Earlier Ideas on Formation beach gravel clast lithology has led most authors to postulate a sediment source to the west, from devon (Fitzroy 1853, Baden-Powell 1930). Such theories implied that transport was eastward from the source areas by littoral drift along former shorelines (de la Beche 1830, Coode 1853, Rennie 1853, Pengelly 1870 and Arkell 1947), or offshore across Lyme Bay (Strahan 1898). By contrast, Prestwich (1875) suggested northwestward transport from a precursor of the Portland raised beach situated south of the Isle of Portland.

4 Prior (1919). suggested three possible sources: (i) a precursor of Chesil beach stretching from Start Point, devon to Portland; (ii) erosion of the east devon coast: and (iii) river gravels deposited in Lyme Bay by a previously extensive Fleet River . This last possibility was supported by Bond (1951) who reconstructed an ancient Exe-Teign river flowing eastward up to 10 km offshore of the present coast with a mouth south east of Portland. Other possibilities such as gravel rafting by ice have also been suggested to account for clasts of exotic lithology (Arkell 1947). 3. Recent Evidence The most comprehensive study of Chesil pebble lithology was undertaken by Carr and Blackley (1969), who concluded that all types could be related to either local sources or to existing sites in south west England. Examination of radiocarbon dated sedimentological (borehole) evidence from the Fleet Lagoon led Carr and Blackley (1973) and Carr (1978) to postulate that Chesil formed as a landward migrating barrier beach .

5 Thus, whilst the over- riding opinion of previous work therefore supported the idea of gravel supply from the west, the most effective evolutionary mechanism appeared to involve onshore transport in response to Holocene sea-level rise. More recent quantitative study of potential gravel sources by Bray (1996; 1997a) indicated that the cliffs to the west of the beach would have constituted the most likely source of material for the beach . Re-evaluation of borehole data documented by Carr and Blackley (1973) and a new set of cored data from the Fleet Lagoon (Coombe, 1998). suggested that the present shingle accumulation of Chesil rested upon a predominantly sandy and shelly foundation. Thus, there is a suggestion that the earlier beach could have been composed of smaller material than its present day counterpart. 4. Sequence of beach Evolution The evidence outlined above has enabled construction of the following chronological sequence, based initially on Carr and Blackley (1973), but with modifications by Bray (1992a, 1992b, 1996, 1997a, 1997b, 1999), High-Point Rendel (1997; 2000) and Brunsden (1999): (i) The initial forerunner of Chesil probably existed as a bank well offshore of the present beach some 120,000 years before present (BP).

6 This bank was contemporaneous with the second development of the Portland raised beach . It is uncertain whether this beach would have stretched across the full extent of Lyme Bay, because raised shorelines have been identified at Hope's Nose and near to Start Point, but substantial associated raised gravel deposits have yet to be identified. (ii) During the last glacial period (Devensian) when sea level was up to 120 m lower than at present, a series of sand and gravel deposits accumulated on what is now 2. the floor of Lyme Bay. These probably comprised material from the Portland raised beach , solifluction deposits, river gravels and fluvio-glacial deposits laid down on the floor of Lyme Bay by meltwaters at the end of the Devensian. (iii) Formation of the present Chesil beach began at the end of the Devensian (20,000- 14,000 years BP) when rapidly rising sea-level caused erosion of these deposits and wave action drove the sands and gravels onshore as a barrier beach .

7 (iv) Close to the land, the beach overrode existing sediments and the Fleet Lagoon was rapidly filled with silt, sand, peat and pebbles. Dating of peat samples retrieved from boreholes suggest that infilling began about 7,000 BP and was virtually complete by 5,000 BP. Such deposition requires shelter, so a significant barrier must have existed at this time indicating that Chesil beach had formed at or slightly seaward of its present position by 4000-5000 BP when sea level approached its present elevation. Cores described by Coombe (1998) suggest that the initial Chesil beach was predominantly sandy rather than gravel-rich, with layers of shells and coarser materials indicative possibly of intervals of overwashing. (v) Relict cliffs abandoned in East devon and West Dorset by falling sea levels in the early Devensian were re-activated around 4,000-5,000 years BP by marine erosion and supplied large quantities of gravel to the shore.

8 Material is believed to have been yielded initially from the reworking of extensive debris aprons located at the cliff toes with erosion cutting into insitu lithologies only in more recent millennia (Brunsden, 1999). Detailed budget and sedimentological analysis indicates that some 30-60 million cubic metres of gravel could have been supplied from these sources (Bray 1996; 1997a; High-Point Rendel 1997). (vi) Much of the cliff gravels supplied to the shore are believed to have drifted to the east via a series of pocket beaches (Charmouth, Seatown and Eype) regulated by alternate open and closed transport at headlands eventually to nourish and enlarge the prototype sandy Chesil beach which would have acted as the sink for this material (Bray 1996; 1997a 1997b; Brunsden 1999). (vii) Coastal recession and human interventions over the past 500 years appear to have depleted the beaches to the west of West Bay and resulted in increasing prominence of headlands.

9 It has reinforced the pocket beaches as a series of distinct sub-cells leading to dislocation of the gravel transport pathway towards Chesil . The beach must now be regarded as a closed shingle system of finite volume and is likely to be sensitive to future environmental changes sea-level rise. This evolutionary sequence suggests that Chesil initially formed mainly from pre-existing predominantly sandy deposits in Lyme Bay swept onshore as the beach migrated landward and sea level rose. Although sufficient to provide shelter for Formation of the depositional environment of the Fleet Lagoon, this supply must have virtually ceased 4,000-5,000 years ago when landward recession slowed. At this point, the debris aprons and cliffs to the west started to release gravels as they were eroded by rising sea-levels. Thus, it is postulated that Chesil would have experienced a rapid influx of gravels only relatively recently (less than 4,000 years BP) which would have nourished the original sand-dominated barrier leading to development of the present shingle barrier.

10 This sequence of events has been incorporated within an animated model to demonstrate the evolution of the beach (Edmonds et al, 2004). 3. It should be noted that this account does not attempt to explain some of the other unique features of the beach such as its size grading or its unusually high crest these are covered by other sources notably Bird (1996) and Bray et al (2004). 5. References ALLISON R J (Ed) (1999a) Dorset Revisited: Position Papers and Research Statements. West Dorset Coastal Research Group (British Geomorphological Research Group), 108pp. ARKELL W J (1947) The Geology of the Country Around Weymouth, Swanage, Corfe and Lulworth, Memoir Geological Survey GB (England and Wales), HMSO. BADEN-POWELL D (1930) On the geological evolution of the Chesil Bank, Geological Magazine, 67(11), 499-513. BIRD E C F (1996) Lateral Grading of beach Sediments: A Commentary. 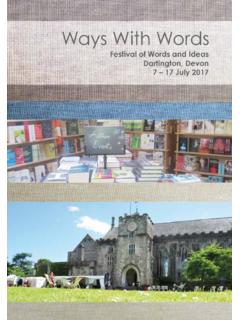 Welcome to the Ways With Words Festival of Words and Ideas. Book festivals are now so popular that one is held, somewhere in Britain, during most weeks of the year. 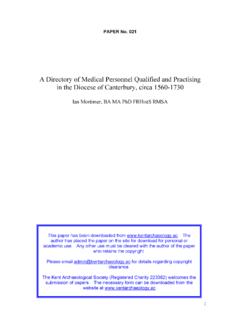 A Directory of Medical Personnel Qualified and …

2 Introduction The question of how many medical practitioners served urban and rural communities in the early modern period has exercised social historians for many years.

Of Words and Ideas Dartington, Devon, Directory of Medical Personnel Qualified and