The Park Avenue Bank (the “Bank”) was a federally insured and state-chartered bank that was headquartered on Park Avenue, New York, New York.

2 ANTONUCCI pled guilty pursuant to a cooperation agreement with the government in October 2010 before District Judge Naomi Reice Buchwald, who imposed today's sentence. Yesterday, Judge Buchwald sentenced Matthew L. Morris, a FORMER senior vice PRESIDENT of the Bank, who also pled guilty pursuant to a cooperation agreement, to one year and one day in prison. ANTONUCCI was the first defendant convicted of fraud of TARP funds, a program whose purpose was to provide funds to viable financial institutions to stabilize and strengthen the nation's financial system, and to enable those financial institutions to increase the flow of financing to businesses and consumers.

3 "The FORMER PRESIDENT and CEO of Park AVENUE Bank Charles Antonucci Sr., was the first person convicted for trying to steal TARP bailout funds, and for that he will spend the next 30 months in federal prison, said Christy Goldsmith Romero, Special Inspector General for TARP (SIGTARP). Antonucci and his co-conspirators brazenly committed crimes that were at the core of the financial crisis. He blatantly lied to bank examiners and took bribes from bank clients in cash and by using clients' private planes and luxury automobiles. He and his co-conspirators orchestrated a scheme to defraud taxpayers through Treasury into giving the bank $11 million dollars in TARP funding by making it appear that an investor invested millions in the bank, when it was really the bank's money.

4 We commend Attorney Preet Bharara for being the first to stand united with SIGTARP to bring to justice bankers involved in TARP. related crime.. According to the Information, Complaint, sentencing submissions, and statements made during court proceedings: Background The Park AVENUE Bank (the Bank ) was a federally insured and state-chartered bank that was headquartered on Park AVENUE , New York, New York. The Bank's clients consisted primarily of small businesses, for which the Bank made loans, extended lines of credit, and maintained depository accounts.

5 As of the end of 2009, the Bank had approximately $500 million on deposit, and over $520. million in assets. ANTONUCCI served as PRESIDENT and chief executive officer ( CEO ) of the Bank from June 2004 to October 2009, and also served on its Board of Directors. During this period, and as part of the fraudulent schemes for which he was convicted and sentenced, ANTONUCCI maintained a corrupt relationship with Wilber Anthony Huff, a Kentucky-based businessman, and Morris, the senior vice PRESIDENT of the Bank. The Schemes From 2006 through 2010, ANTONUCCI, Morris, and Huff engaged in a massive multifaceted conspiracy, in which they schemed to (i) receive and pay bank bribes, (ii) engage in self-dealing; (iii) defraud bank regulators and the board and shareholders of a publicly traded company, and (iv) fraudulently purchase an Oklahoma insurance company.

6 Bank Bribery From 2007 to 2009, Huff paid ANTONUCCI and Morris at least $400,000 in exchange for which they: (i). provided Huff with fraudulent letters of credit obligating the Bank to pay an investor in one of Huff's businesses $ million if Huff failed to pay the investor back himself; (ii) allowed certain of Huff's beneficially owned businesses to accrue $9 million in overdrafts; (iii) facilitated intra bank transfers in furtherance of certain of Huff's other frauds; and (iv) fraudulently caused the Bank to issue at least $ million in loans to Huff's beneficially owned businesses.

7 In particular, ANTONUCCI and Morris accepted bribes from Huff, including but not limited to hundreds of thousands of dollars of cash bribes, free use of Huff's airplane, and free use of another customer's luxury automobile. On more than 10 occasions in 2008 and 2009, ANTONUCCI used a private plane owned by Huff to fly to, among other places, Florida, Panama, Arizona (so that ANTONUCCI could attend the Super Bowl), and Augusta, Georgia (so that ANTONUCCI could attend the Masters Golf Tournament). Self-Dealing ANTONUCCI also engaged in a pattern of self-dealing in connection with his position as PRESIDENT and CEO of the Bank.

8 For example, ANTONUCCI, among other things, approved a $400,000 loan through the Bank to an entity he controlled called Easy Wealth, through which ANTONUCCI obtained tens of thousands of dollars in proceeds. ANTONUCCI also had the Bank pay rent to him for one or more properties that ANTONUCCI owned and which the Bank did not use, including a property in Fishkill, New York, and directed Bank employees to perform substantial work on non-Bank matters in which he had personal financial interests. Fraud on Bank Regulators and a Publicly Traded Company From 2008 to 2009, ANTONUCCI, Morris, and Huff engaged in a scheme to prevent the Bank from being designated as undercapitalized by regulators a designation that would prohibit the Bank from engaging in certain types of banking transactions, and that would subject the Bank to a range of potential enforcement actions by regulators.

9 Specifically, they engaged in a series of deceptive, round- trip financial transactions to make it appear that ANTONUCCI had infused the Bank with $ million in new capital when, in actuality, the $ million was part of the Bank's pre-existing capital. ANTONUCCI, Morris, and Huff funneled the $ million from the Bank through accounts controlled by Huff to ANTONUCCI. This was done to make it appear as though ANTONUCCI was helping to stabilize the Bank's capitalization problem, so the Bank could continue engaging in certain banking transactions that it would otherwise have been prohibited from doing, and to put the Bank in a better posture to receive $11 million from the TARP.

10 To conceal their unlawful financial maneuvering, Huff created, or directed the creation of, documents falsely suggesting that ANTONUCCI had earned the $ million through a transaction involving another company ANTONUCCI owned. When the Bank's regulators began investigating the source of the purported $ million capital infusion, ANTONUCCI lied to them about the true nature of the transaction. ANTONUCCI, Morris, and Huff further concealed their scheme by stealing $ million from General Employment Enterprises, Inc. ( GEE ), a publicly traded temporary staffing company, in order to pay the Bank back for monies used in connection with the $ million transaction. 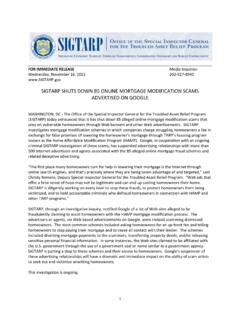 The Office of the Special Inspector General for the Troubled Asset Relief Program investigates fraud, waste, and abuse in connection with TARP. 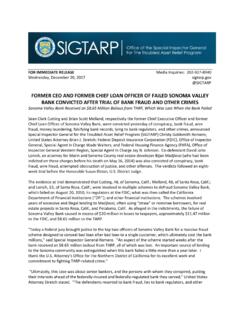 “Today’s verdict sends a strong message that bank executives and attorneys who devise and orchestrate multi-million-dollar bank fraud schemes will be held accountable for their crimes,” said FDIC Inspector 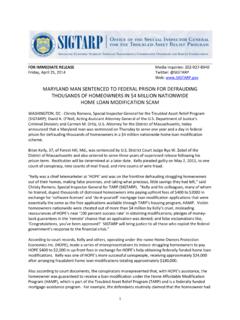 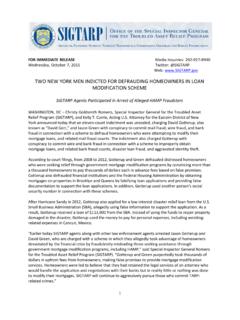 This prosecution was the result of efforts by President Obama’s Financial Fraud Enforcement Task Force (FFETF) which was created in November 2009 to wage an aggressive, coo rdinated and proactive effort to

FACTORS AFFECTING IMPLEMENTATION OF THE HOME …

home preservation initiatives under the broad Making Home Affordable (“MHA”) program, including the Home Affordable Modification Program (“HAMP”). HAMP is a $75 billion program that includes $50 billion from TARP for the modification of privately-owned mortgage loans. 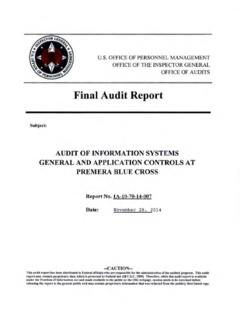 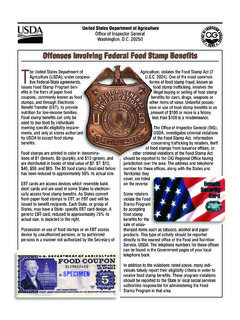 Department of The Army Inspector General … 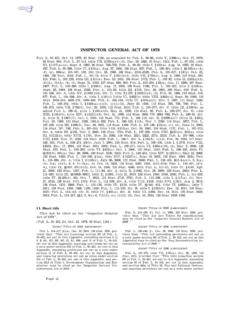 FOREWORD Fraud, Waste or Abuse (FWA) is a potential problem that can drain significant resources and ultimately rob American taxpayers. During the period of 1 October 2010 through 31