2 We recommend the separated measurement O due to formation of Phosphonic acid from Fosetyl Degradation product O 3+ both in solution and through in-source Al P HO P OH fragmentation. This can be easily seen by In-source - H3C O O. H measuring Fosetyl -D5 solution. The chomatogram fragment H. 3 on the right shows two peaks at the mass trace Fosetyl -Al Phosphonic acid of Phosphonic acid . Phosphonic acid 81/79. From January 2014 to December 2015 a total of Many samples naturally contain high 4265 samples of different commodity types of concentrations of phosphoric acid , which is co- plant origin were separately analyzed for residues extracted during the sample preparation process. of Fosetyl and Phosphonic acid . Analysis was The chromatographic separation of Phosphonic accomplished by the QuPPe-Method involving acid from phosphoric acids is often compromised extraction by acidified methanol, filtration, dilution resulting in a suppression of the Phosphonic acid and LC-MS/MS in the ESI negative mode using signal and in some cases even leads to false the Hypercarb column.

4 Of samples containing No. of samples No. of samples Minimum and maximum contents of Although m/z 81/63 is a very minor transition of phosphoric acid its interference on Phosphonic containing conventional samples Phosphonic exceeding the MRL Phosphonic acid and production Fosetyl acid Fosetyl [mg/kg]. Babyfood on 12 7 (58%) 4 acid can be very significant due to the typically fruitbasis Berry fruits 572 377 (66%) 11 (grapes). 2 high levels of phosphoric acid in samples. By Pome fruits 202 141 (70%). (blackberries) - diluting the sample extracts, the Stone fruits 260 92 (35%). 5. (3x nectarines, - chromatographic separation considerably cherries, avocados). improves allowing proper peak integration next - Citrus fruits 194 138 (71%) 1 (lemons). to the high levels of Phosphoric acid .

7 Stem veg. 99. 39. 3 (3%). 4 (10%) 1 (fennel). of Fosetyl findings were encountered in rucola Dry pulses and cereals 38 10 (26%) (highest value: < mg/kg) and grapes (also * No Fosetyl was detected in samples of organic production grape products). We suspect that Fosetyl is formed Reference as an artefact during production or storage of Quick Method for the Analysis of numerous Highly Polar Pesticides in Foods of Plant Origin via LC-MS/MS involving Simultaneous Extraction with Methanol wine. (QuPPe-Method), Version , May 2016. Quick Method for the LC-MS/MS Analysis of Highly …

QuPPe Method Version 9.3, August 2017 2 of 76 1. Scope and Short Description A method is described for the residue analysis of very … 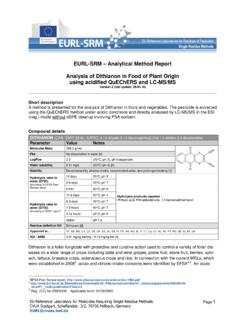 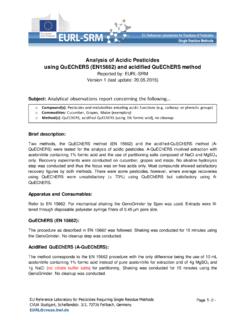 Page 3 of 30 EURL-CF DTU, National Food Institute 1. Introduction This report describes the validation of the QuEChERS method combined with GC-MS/MS and LC-

Identification criteria for residues determined by … 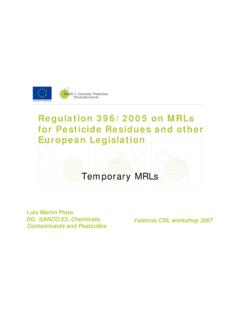 Determination of pesticide residues in avocado … 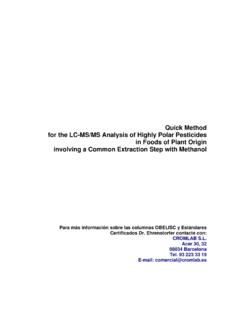 QuPPe Method Version 9.3, August 2017 2 of 76 1. Scope and Short Description A method is described for the residue analysis of very polar, non … The aim of this project is to evaluate the performance and versatility of the AutoMate-Q40 for the extraction of highly polar compounds using the QuPPe-Method M7. 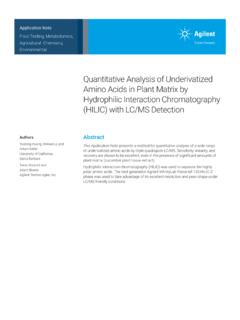