From Cloud Computing to Sky ComputingIon Stoica and Scott ShenkerUC BerkeleyAbstractWe consider the future of Cloud Computing and ask how wemight guide it towards a more coherent service we call skycomputing. The barriers are more economic than technical,and we propose reciprocal peering as a key enabling Reference Format:Ion Stoica and Scott Shenker. 2021. From Cloud Computing to SkyComputing. InWorkshop on Hot Topics in Operating Systems (HotOS 21), May 31-June 2, 2021, Ann Arbor, MI, , New York, NY,USA, 7 pages. IntroductionIn 1961, John McCarthy outlined what he saw as the futureof Computing (we regretfully note the gendered language): computation may someday be organized as a pub-lic utility, just as the telephone system is a publicutility. We can envisage computer service compa-nies whose subscribers are connected to them [.]

hoo!, Google, eBay, and Amazon – but the onus of creating large-scale service-specific infrastructures became a barrier to entry in the Internet services market because these steps required huge investments which most could not afford. This changed in 2006 when Amazon launched S3 and EC2, kicking off the age of cloud computing by ...

1 From Cloud Computing to Sky ComputingIon Stoica and Scott ShenkerUC BerkeleyAbstractWe consider the future of Cloud Computing and ask how wemight guide it towards a more coherent service we call skycomputing. The barriers are more economic than technical,and we propose reciprocal peering as a key enabling Reference Format:Ion Stoica and Scott Shenker. 2021. From Cloud Computing to SkyComputing. InWorkshop on Hot Topics in Operating Systems (HotOS 21), May 31-June 2, 2021, Ann Arbor, MI, , New York, NY,USA, 7 pages. IntroductionIn 1961, John McCarthy outlined what he saw as the futureof Computing (we regretfully note the gendered language): computation may someday be organized as a pub-lic utility, just as the telephone system is a publicutility. We can envisage computer service compa-nies whose subscribers are connected to them [.]

2 ].Each subscriber needs to pay only for the capac-ity that he actually uses, but he has access to allprogramming languages characteristic of a verylarge system. As a prediction about technology, McCarthy s vision wasremarkably prescient. His short description accurately de-picts what we now call Cloud Computing , where users haveaccess to massive amounts of computation and storage andare charged only for the resources they use. On the contrary,his prediction about economics was far off the mark; today,in the United States even telephone service is no longer apublic utility but delivered instead through a competing setof providers. However, while not a utility, phone service islargely a commodity, providing a uniform user , no matter what provider you use, you can reach anyone,Permission to make digital or hard copies of all or part of this work forpersonal or classroom use is granted without fee provided that copies are notmade or distributed for profit or commercial advantage and that copies bearthis notice and the full citation on the first page.

3 Copyrights for componentsof this work owned by others than ACM must be honored. Abstracting withcredit is permitted. To copy otherwise, or republish, to post on servers or toredistribute to lists, requires prior specific permission and/or a fee. Requestpermissions from 21, May 31-June 2, 2021, Ann Arbor, MI, USA 2021 Association for Computing ISBN 978-1-4503-8438-4/21/05.. $ switching providers is relatively easy; you can even keepyour number when to McCarthy s prediction, what concerns ushere is not that there is no single public Computing utility,but that Cloud Computing is not an undifferentiated commod-ity. In contrast to telephony, the Cloud Computing market hasevolved away from commoditization, with Cloud providersstriving to differentiate themselves through proprietary ser-vices.

4 In this paper we suggest steps we can take to overcomethis differentiation and help create a more commoditized ver-sion of Cloud Computing , which we call the Sky doing so, we briefly summarize the history of cloudcomputing to provide context for the rest of the Historical ContextThe NSF high performance Computing (HPC) initiative inthe 1980s provided an early glimpse of the utility computingvision, though limited to the HPC community. However, theadvent of personal computers delayed this vision by puttingthe focus on smaller-scale Computing available to all, ratherthan high-performance Computing for a smaller personal computer industry was started by hobbyistswho wanted their own machines to tinker with, and wasfuelled by Moore s Law that enabled personal computers tokeep up rapidly increasing user emergence of the Internet led quickly to several pop-ular services being accessible worldwide, including e-mail,bulletin board systems, and games.

5 The advent of the WorldWide Web ignited an explosion of new services such assearch, on-line retail, and eventually social media. To copewith the resulting scale, these services had to build data-centers and design their own complex distributed path was followed by many companies such as Ya-hoo!, Google, eBay, and amazon but the onus of creatinglarge-scale service-specific infrastructures became a barrierto entry in the Internet services market because these stepsrequired huge investments which most could not changed in 2006 when amazon launched S3 and EC2,kicking off the age of Cloud Computing by democratizing ac-cess to compute/storage and promoting the pay-as-you-go business model. This, together with the end of Moore s Law(which made it quite expensive to build and scale services inon-premise clusters), led to a renewed push towards build-ing what could have become utility Computing .

6 However,commercial trends have pushed us in a different 21, May 31-June 2, 2021, Ann Arbor, MI, USAIon Stoica and Scott ShenkerIn the early years when amazon was dominant in thecloud, they set the de facto standard for Cloud , in the past decade several competitors have emergedin this market. According to a recent report [6], AWS nowowns just 32% of the market, followed by Microsoft with 19%,Google with 7%, Alibaba with 6%, and the other clouds (suchas IBM and Oracle) splitting the rest of the remaining 37% ofthe Cloud market (due to roundoff errors this adds up to 101%).This competition has led to lower prices and an increasingarray of products and services. For instance, AWS alone of-fers more than 175 products and services [8]. However, manyof these services are proprietary, and these proprietary ser-vices are one of the main ways Cloud providers differentiatethemselves.

7 For example, each Cloud has its own APIs formanaging clusters, its own version of object store, its ownversion of a data warehouse, its own serverless offering, andso on. Applications developed on one Cloud often do notwork on a different Cloud without substantial changes, thesame way an application written for Microsoft Windowsrequires substantial changes to work on Mac OS. Thus, com-petition in the Cloud market has led us away from the visionof utility course there have been many calls for standardizingcloud Computing [28,39], but these have had little impact onthe increasing drive towards Cloud differentiation. The busi-ness models of current Cloud providers are built around at-tracting, and then retaining, customers, and this goes againstoffering a purely commoditized service.

8 The question weaddress, then, is how do we make progress towards the goalof utility Computing ?Our proposal is called Sky Computing , to connote that weare trying to look beyond individual clouds. However, we arenot the first to use the term "Sky Computing . Starting in 2009,several papers have proposed designs with this name [30,34,35]. However, these papers focus on particular technicalsolutions, such as running middleware ( , Nimbus) on across- Cloud Infrastructure-as-a-Service platform, and targetspecific workloads such as high-performance Computing (HPC). This paper takes a broader view of Sky Computing ,proposing it as the universal software platform for futureapplications and considering how technical trends and themarket forces can play a critical role in the emergence ofSky Lessons from the InternetDespite the fact that Cloud Computing and the Internet differalong many dimensions, we think the Internet provides a use-ful set of historical lessons.

9 In the early 1960s several groupswere developing packet switching technology. These earlynetworks worked well, but were incompatible with eachother. The community faced a choice: should it standardizeon a single networking technology, or could it find a way toaccommodate diversity? In 1972 Robert Kahn proposed open-architecture networking [32], which advocated a universalinteroperability layer that could allow any two networks tointerconnect. This became the Internetworking Protocol (IP).IP and the protocols above it were all that was needed in theARPAnet, which was a single coherent network. However, asthe ARPAnet grew into the Internet, and the Internet grewto include separate Autonomous Systems (ASes, which areindependently run networks), the Internet needed some wayfor packets in one network to reach another.

10 This was notabout low-level compatibility in network technologies, thiswas a question of routing: how can the network successfullydirect packets over a set of independently run Border Gateway Protocol (BGP) was invented to solvethis problem, and is now the glue that makes the set of inde-pendently run networks appear as a coherent whole to was a technical solution, but an economic problem re-mained: when networks interconnect, does money changehands, and if so, who pays whom? A set of business prac-tices have emerged for these peering or interconnectionagreements. For instance, customers pay providers, but twonetworks of similar size and capability might do payment-free peering. These peering arrangements are technicallystraightforward, but bring up thorny policy questions suchas: can provider A charge Internet service B for carryingB s traffic, even if B is not directly connected to A. 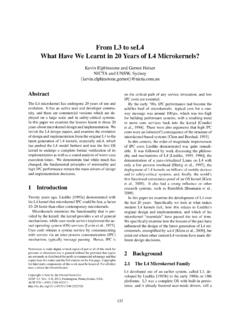 From L3 to seL4 What Have We Learnt in 20 Years of L4 Microkernels? Kevin Elphinstone and Gernot Heiser NICTA and UNSW, Sydney fkevin.elphinstone,gernotg@nicta.com.au 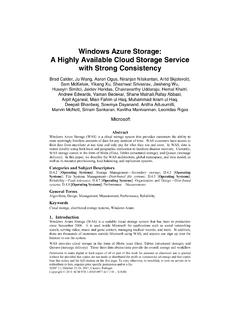 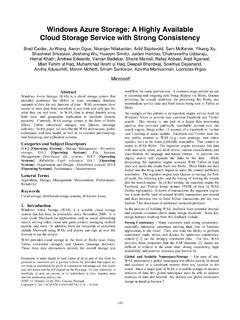 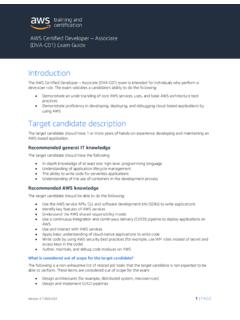 Amazon S3 location where your input data resides. If you move or change the Amazon S3 ﬁle, Amazon ML cannot access or use it to create a ML model, generate evaluations, or generate predictions. The following table deﬁnes terms that are related to datasources. Term Deﬁnition Attribute A unique, named property within an observation.