FROM THE KILLING FIELDS TO COMPASSION

FROM THE KILLING FIELDS . T O C O M PA S S I O N. by David R. Aquije; photos by Sean Sprague Cambodia then and now as seen by a Maryknoll missioner and his driver S. iphal Op knows the work of in Phnom Penh, the capital of Cam- the Maryknoll missioners very bodia. The museum is located in a well. He has been the Maryk- former elementary and high school noll Fathers and Brothers' driver in that the communist government of Cambodia for 25 years. These days the Khmer Rouge turned into Secu- he frequently chauffeurs Father Kevin rity Prison 21, or S-21, a center for Conroy, a Maryknoll priest associate, detention, torture and execution be- around the Southeast Asian nation.

FROM THE KILLING FIELDS TO COMPASSION by David R. Aquije; photos by Sean Sprague Cambodia then and now as seen by a Maryknoll missioner and his driver S iphal Op knows the work of the Maryknoll missioners very well. He has been the Maryk-noll Fathers and Brothers’ driver in Cambodia for 25 years. These days

1 FROM THE KILLING FIELDS . T O C O M PA S S I O N. by David R. Aquije; photos by Sean Sprague Cambodia then and now as seen by a Maryknoll missioner and his driver S. iphal Op knows the work of in Phnom Penh, the capital of Cam- the Maryknoll missioners very bodia. The museum is located in a well. He has been the Maryk- former elementary and high school noll Fathers and Brothers' driver in that the communist government of Cambodia for 25 years. These days the Khmer Rouge turned into Secu- he frequently chauffeurs Father Kevin rity Prison 21, or S-21, a center for Conroy, a Maryknoll priest associate, detention, torture and execution be- around the Southeast Asian nation.

2 Tween 1975 and 1979. It is estimated On a sweltering day in March, that 20,000 people were killed at Tuol Siphal takes a team of reporters Sleng. All told, an estimated 2 million from Maryknoll magazine to visit Cambodians were murdered in the the Tuol Sleng Genocide Museum Khmer Rouge reign of terror. 14 J A N U A RY / F E B R U A RY 2 0 1 4 M A RY K N O L L. Father Kevin Conroy consoles and brings palliative W W W. M A R Y K N O L L M A G A Z I N E . O R G 15. care to a Cambodian woman with cancer. The Tuol Sleng Genocide Museum, top left, in the Cambodian capital of Phnom Penh was once the high school of Siphal Op, top right, who has been the driver for the Maryknoll Fathers and Brothers in Cambodia for 25 years.

3 In bottom photo, Father Conroy gives a homily in the Khmer language and in Cambodian style, barefoot in a pewless church. 16 J A N U A RY / F E B R U A RY 2 0 1 4 M A RY K N O L L. Siphal waits outside while his Very early the next morning, passengers visit the museum. He Siphal steers the four-wheel-drive has never entered the museum. vehicle to the fishing village of Arey He says he never will. This was his Ksach, on the border with Viet- school. He studied there until 10th nam, about 50 miles from Phnom grade, when the Khmer Rouge took Penh. Father Conroy plans to cel- it over and turned it into a house ebrate Mass in Khmer, the official of death.

4 Language of Cambodia, for the I don't want to remember the small, immigrant community of nightmare of the time of Pol Pot, Vietnamese Catholics living along Siphal says, referring to the com- the Mekong River. During the two- munist dictator and leader of the hour drive Siphal and Conroy pass Khmer Rouge. I don't want to see the time like old friends, laughing this place that was once mine. We and telling stories of mission. lost our teacher. I have such sadness Father Conroy celebrates the in my heart. Mass barefoot, like the rest of the faithful in the congregation. The San Jose Church has no pews and the nearly 300 people sit, kneel or stand on rugs.

5 The majority of them are children and youths. More than half of Cambodia's 15 million people are under 17 years old. After Mass as he waits while Father Conroy talks with parishio- ners, Siphal continues his account of life and death during the years of the Pol Pot bloodbath. He was 15 years old when his school was seized by the Khmer Rouge. He was accused of being a Muslim in the primarily Buddhist country and sentenced to hard labor at an agri- cultural camp, where he saw hun- dreds of other prisoners die. In the camp, Siphal says, there were 1,000 workers, but only 75. survived. Thanks to his ability to fish, something his father taught him, Siphal lived.

6 They only gave us a little portion of rice a day, he says. But I secretly ate fish, shrimp, frogs and crabs raw. To treat the diarrhea that came with this diet, Siphal ate the bitter bark of a me- W W W. M A R Y K N O L L M A G A Z I N E . O R G 17. dicinal tree that he knew about, and the spirit and COMPASSION of the when he could, he made a saline so- Maryknoll missioners in its day-to- lution of water, salt and sugar. day operations. Siphal's saddest memory is The existence of this hospital is when the Khmer Rouge let him see due to the work of the Holy Spirit his parents for a mere 10 minutes and the hospital's principal objec- before they were executed.

7 Yet, he tive is to be of service to the poor, . says, he knew he had to transform says Te Serey. the pain of their deaths into grati- Father Conroy, from the Dio- tude for life. He says he is fortunate cese of Cleveland, Ohio, is a busy to work for Maryknoll and he is missioner. Besides offering pastoral hopeful for Cambodia's future. service to Vietnamese immigrants, As Siphal narrates his life story, he directs a mental health pro- Father Conroy is in big demand gram sponsored by the Maryknoll among the Vietnamese community. Fathers and Brothers, a project The adults wait their turn to greet designed to respond to the lack of him, while the children cling to his such service in the country follow- side.

8 When everyone who wants to ing the devastation of the Khmer visit with the priest has done so, it's Rouge, who executed the majority time for another mission visit. of the country's professionals. This time Siphal takes Father The trauma inflicted by the Conroy to the Takeo Eye Hospital, war and the moral depravation the a project begun by Maryknoll. The people suffered at the hands of the hospital, which was inaugurated in Khmer Rouge is still a constant tor- 2010 by Cambodia's King Noro- ture for the survivors, Conroy says. dom Sihamoni, was an initiative Among the ailments people suf- of Maryknoll Father John Barth, fer are post-traumatic stress disor- who was serving in Cambodia at der, severe depression, anxiety and that time.

9 Maryknoll supporters trauma, schizophrenia and other funded the hospital construction. psychological disorders, he says. Today, Father Barth is a missioner To maximize the program's efforts, in South Sudan, where he plans to local people are trained to help pa- build another eye hospital to serve tients in their communities, Father the poor of that new nation. Conroy says. Father Conroy converses with With a doctorate in clinical Doctor Te Serey Bonn, a program psychology and counseling, Father director at the hospital, which is Conroy is also a professor at the now operated by Caritas Interna- Royal University of Phnom Penh, tionalis, a worldwide Catholic re- where he began a master's degree lief and development organization, program in psychology.

10 He also and the Daughters of Charity. The helps supervise another program of young doctor finished his medical the Maryknoll Fathers and Broth- studies with a scholarship arranged ers, Seedling of Hope, which offers by Father Barth and says the hos- services for those affected by the pital continues to be inspired by hiv/aids pandemic (see page 26). 18 J A N U A RY / F E B R U A RY 2 0 1 4 M A RY K N O L L. A photo from Tuol Sleng Genocide Museum in Phnom Penh, Cambodia, shows life under the Khmer Rouge in the1970s, when Cambodians were driven into forced labor in the countryside. (From Tuol Sleng Museum). Before signing on with Maryk- an enormous tumor in her abdo- noll, Father Conroy served as a men and complains of the pain, yet missioner in El Salvador. 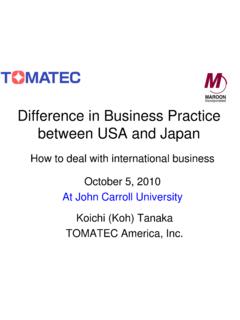 Difference in Business Practice between USA and Japan

Difference in Business Practice between USA and Japan How to deal with international business October 5, 2010 ... TOMATEC America, Inc. Products fall into the following six categories, and reflect both the current Japanese lifestyle and the future of packaging. Head Office Building Area of Business ： + Manufacturing and sales of packaging ...

Business, Practices, Between, Differences, America, Difference in business practice between

[Thanks to Mark Shapiro, who sent this in.] Abandoned On …

had been abandoned on the killing fields! For however the PAO monkeys try to spin this, the reality is that this group of Soldiers were, at the moment of maximum … 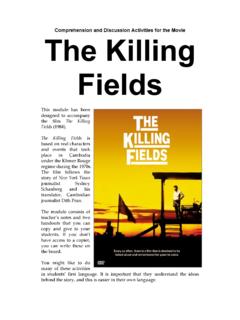 The Killing Fields - The Curriculum Project

The Killing Fields is based on real characters and events that took place in Cambodia during the Khmer Rouge time. It follows the story of New York Times journalist Sydney Schanberg, and his Cambodian colleague and translator, Dith Pran. The film, made in 1984, is based on Schanberg’s book The Death and Life of Dith Pran.

The Killing Fields, Ethnic Cleansing and Genocide in Europe ...

The Killing Fields, Ethnic Cleansing and Genocide in Europe: Yugoslavia as a Case Study The Bloodlands: An Historical Overiew Ian Kershaw, in The End: The Defiance and Destruction of Hitler’s Germany, 1944-1945, recounts in great detail the horrific slaughter accompanying the end of the World War II in Europe, 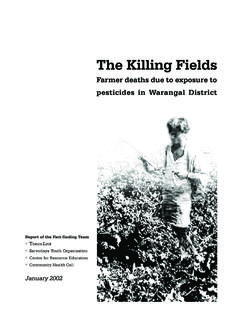 The killing fields of Warangal PAGE 5 where exposed person had to undergo treatment. A systematic update and scrutiny of medical records from healthcare units in Warangal region would provide an accurate picture of the exact number of cases. This is because, based on first-hand observations from the field visits and the intensity of cotton ...

The Killing Fields: The ongoing slaughter in the offices ...

The Killing Fields: The ongoing slaughter in the offices, clinics, gurneys, and beds of Managed Care Kaiser and Stress Tests by Charles Phillips, M.D. Webmaster's additional note: February 5, 2000 - Charles Phillips, M.D. is a former Kaiser physician. He left the system when he found his "shifts" suddenly cancelled causing him profound

The Many Colors of Crime - scholar.harvard.edu

Cultural Mechanisms and Killing Fields 9 ing numerous direct tests of the thesis of relative invariance in the causes of crime by race. At the same time, society has changed in ways that are decidedly for the better, so much so that the United States is now witness- ing one of the lowest rates of violence it has seen since the mid-ig6os,

Field, Crime, Many, Color, Killing, Killing fields, The many colors of crime

which uses convex functions to construct a wide variety of manifolds of negative curvature (7.5). For example, negative space forms can easily be constructed in this way from flat space forms (7.10). The study of Killing fields on warped products (8.2) shows in particular that the dimensions and length of mobility sequences are

one of more than 300 killing fields throughout the country. Today, it’s our main memorial site to all who perished. They were executed in cold blood because of hatred, ignorance, and fear – all for a false cause. Stop number 2 is a simple sign marking what was once a Truck Stop. Before