EALABAMA. fUTURE . VoL VII Auburn, Ala. FARMER November 1937 Seven Boys From Alabama First FHA News Letter Three Alabama FFA Boys At:t:end National Meeting Published In November Named American farmers Alabama 's delegation of seven out All Alabama FFA boys will be glad Three Alabama boys-C. W. Wells, standing boys at the 10th annual to know that their sister organization, Jr., Jemison; Joseph Pearson, Dixon's FFA Convention in Kansas City in The fUTURE Homemakers of Alabama , Mills; and Lawrence Crawford, October was headed by O'Neill Sewell, have this month issued the first edi Marion-were among the 75 young Wetumpka, and Marvin Smith, Cull tion of a news letter, which, it is farmers awarded the American Farm . man, president and vice-president, re hoped, will soon be received regularly er Degree at the National FFA Con . of the Alabama Associa by every FHA girl in the State.

1 EALABAMA. fUTURE . VoL VII Auburn, Ala. FARMER November 1937 Seven Boys From Alabama First FHA News Letter Three Alabama FFA Boys At:t:end National Meeting Published In November Named American farmers Alabama 's delegation of seven out All Alabama FFA boys will be glad Three Alabama boys-C. W. Wells, standing boys at the 10th annual to know that their sister organization, Jr., Jemison; Joseph Pearson, Dixon's FFA Convention in Kansas City in The fUTURE Homemakers of Alabama , Mills; and Lawrence Crawford, October was headed by O'Neill Sewell, have this month issued the first edi Marion-were among the 75 young Wetumpka, and Marvin Smith, Cull tion of a news letter, which, it is farmers awarded the American Farm . man, president and vice-president, re hoped, will soon be received regularly er Degree at the National FFA Con . of the Alabama Associa by every FHA girl in the State.

2 Vention this fall at Kansas City, Mo, tion. Both attended as official dele- If you want to be of assistance to This degree is the highest award in gates of the Associa the FFA. Recipients tion. must have completed The following dis . Alabama s American farmers successfully t h r e e trict presidents were years of high school sent to the convention work in Vocational b y their districts: Agriculture, supple . Bra dIe y Twitty, mented by successful Cherokee, (also state farming and com . secretary), Mus c I e munity servic,e and Shoals; Pete Turn evidence of leader . ham, Milltown, (also ship. They must have state treasurer), East received previously A I a bam a District; the three lower FFA. Dolphus Price, Falk degrees, earned a t ville, Decatur Dis least $500 in their trict. Expenses 0 f home-project work, Richard Payne, Ram and have been out.

3 Er Chapter reporter, standing in the State were borne by his in cooperative en . chapter, and attend deavors and rural ance at the conven leadership. tion of M a x well C. W. WELLS. JR. JOSEPH PEARSON LAWRENCE CRAWFORD E a c h state may Lewis, Ramer, State submit applications reporter, was made possible by the the new publication, we 'suggest that for only one American FARMER per Montgom'ery Kiwanis Club. Also at you tell the FHA's in your school thousand members and the 120 ap . tending the convention was H. F. about the news letter and urge that plications received this year were Gibson, Auburn, assistant State ad they arrange to receive the next issue. further reduced to a total of 75 by a viser. The convention was opened Miss Mary Ling Hayley, state FHA national FFA constitutional ruling, with the regular ceremony at 9 :00 a. adviser, says that the news letter Awards went this year to boys in 33.

4 M., Oct. 18, in the new, six-million marks "another mile-stone in the de states and the Territory of Hawaii. dollar Municipal Auditorium at Kan velopment of our association. Read C. W. Wells, Jr., a fourth-year stu . sas City by President Joe H. Black. the good things which have been done dent of Vocational Agriculture, is Preceding the opening ceremony in various chapters and the news in president of the Jemison Cha:pter. music was furnished by a 300-piece relation to the State Association, then During his four years of Vocational FFA Band composed of boys from think of the good things your chapter Agriculture, Wells has carried out an Utah, Texas, and Missouri. has done or is doing. Have your re- outstanding program of scientific (Turn to Page 2) (Turn to Page 2) (Turn to Page 2). 2 THE Alabama fUTURE FARMER . American farmers lowing projects: 10 acres of corn, (From Page 1) Auburn FFA Constructs Walk one Duroc-Jersey hog, 500 broilers, farming enterprises.

5 Among the pro five acres of peaches, home beautifi . jects listed in which Wells has demon cation, 75 white Leghorn hens, and 12. strated proficiency home orchard, beef cows. From these seven pro . cotton, corn, beef calves, meat hogs jects, Crawford realized a profit of (sow and litter), watermelons, and $ poultry. In addition to satisfactorily He was not only an outstanding conducting a program of supervised member of the FFA but was also a farnling, Wells has consistently won leader scholastically while in high State and c hap t e r agricultural school, his average being 90 plus for awards. In 1935 he won first prize in his high school work. Lawrence is the State essay contest and State the third member of his family to re . prize in an essay contest sponsored by ceive the American FARMER Degree, the Alabama Polytechnic Institute. two of his brothers having previously A year later he won the chapter pub been awarded this honor.

6 Lic speaking contest and placed second in the district contest. During this National Convention time Wells held the position of re (From Page 1). porter for the Jemison Chapter and The convention hall was appropri . the Chilsheltauga District and was ately decorated in the official colors elected to the presidency of both of the organization. Officers' sta . bodies. He resigned the Chilsheltauga tions were properly designated with post when elected president of the the correct symbols, and special plat . Alabama Association. forms were provided at each station. Wells is interested in all sports but The delegates were seated under a has not allowed his extra-curricula set of attractive State Standards. activities to interfere with his studies. Over 7,000 youths, representing His scholarship average for his entire 143,600 boys studying vocational ag'.

7 High school career is a high B, giving A permanent service to their school has riculture, came as official delegates, him the rank of third in a class of 31. been provided by members of the Auburn Chapter who completed on November 8 over members of judging teams, exhibi . He will graduate this year with 20 200 feet of concrete sidewalk leading from tors, and as visitors. Delegates were credits at the age of 18. Upon com the High School to the Vocational Building. In the top photograph the boys may be seen ;present from 47 states and Hawaii. pletion of his high school course, laying the forms. The middle photograph shows them mixing the concrete 7 and at the The American FARMER Degree Wells plans to attend the Alabama bottom Prof. A. L. Morrison, adviser, (cen awards went to 75 boys in 33 states Polytechnic Institute where he will ter) is shown supervising the finishing of the walk by Wilton Thorpe (right) and and the Territory of Hawaii.

8 Robert study chemistry and agriculture. Spearman Fitzpatrick, Jr., both of whom play a brand of football that is equal to Lee Bristow, Saluda, Va., who took a Joseph Pearson, at the time of his their success in FFA work. run-down Virginia farn1 and made it graduation from high school in 1936, pay, was acclaimed the 1937 Star had completed three years of V oca . school activities other than those FARMER of America and was present . tional Agriculture and had been an sponsored by the FFA and ranked ed $500 by The Kansas City Star. FFA member for five years. He second in his class in scholarship, his In the National FFA Public Speak . served his chapter as president dur . average being 87. Since finishing ing Contest, Jack Gunning, Oshkosh, ing his junior and senior years. high school, he has been a regular Wis., won first place, subject "First Pearson's three-year supervised prac.

9 Evening school student and has helped in Agriculture" ; Bernel Simmons, tice program, which represented a his adviser in the organization of Magnolia, Miss., won second place, cross section of the business of farm . farm meetings and in FFA work. His subject "The Need of Soil Conserva . ing, consisted of the following enter . evening school work has been out tion", and third place went to David prises: corn, cotton, dairying, work standing and his three-year super Inciong, Hamakaupoka, Maui, Hawaii, stock, and landsc!!lp,ing. Important vised practice program has grown in subject "The Necessity for Trained improvement projects and many sup . to a long-time farm iP'l'ogram. farmers ". plementary farm practices were also included. In addition, he was out Lawrence Crawford, 17, attended standing in farm shop work. Perry County High School and was First FHA News Lel:l:er During his FFA career Pearson was a member of the Marion Chapter.

10 He (From Page 1). a winner in many contests, among completed his high school course at porter write them up and send them to which were the chapter public speak the Auburn Summer Session and is me at Alabama College, Montevallo.". ing contests in 1935 and 1936 and now studying agriculture and veteri State FHA officers are as follows: the district contest in 1936. In the nary medicine at A. P. 1. Clara Belle Alexander, Pell City, fall of 1935, the Dixie Four District While in high school, Crawford president; Lera Dee Conway, Jemison, Association was organized, and he participated actively in FFA projects. vice-president; Martha E. Eidson, was unanimously elected president. During his last year his supervised New Brockton, secretary; and Miriam Pearson also took an active part in practice program consisted of the fol Harrison, Enterprise, treasurer. 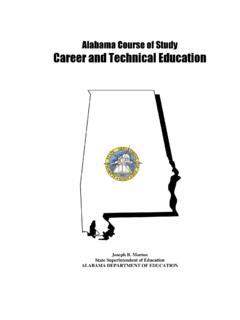 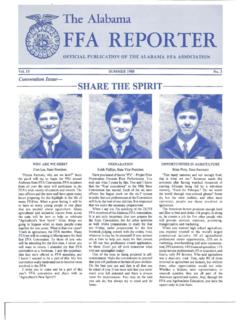 THE NATIONAL OltCANIZATION FOR STUDENTS …

alabama association . future farmers of america . the national oltcanization for students of vocational agriculture . report of alabama. associati on of future falwers of 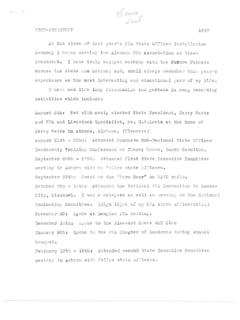 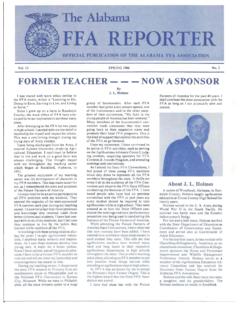 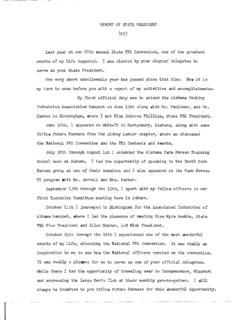 REFORT OF 5rATE PRESIDENT 1957 . Last year at our 27th annual State FFA Convention, one of the greatest events of my life happened. I was … 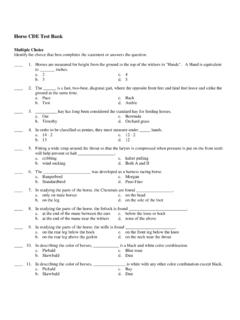 Horse CDE Test Bank Multiple Choice Identify the choice that best completes the statement or answers the question. ____ 1. Horses are measured for height from the … FFA CREED SPEAKING EVENT SAMPLE JUDGES QUESTIONS 1. What are some achievements of past generations of agriculturalists? 2. What does it mean to play square with those whose happiness depends upon you? 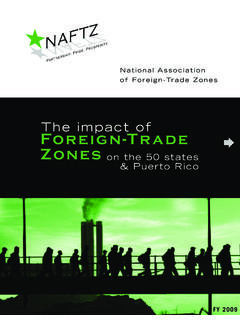 The impact of Foreign-Trade Zones on the 50 …

The Impact of Foreign-Trade Zones on United States and Puerto Rico provides a state-by-state breakdown of foreign-trade activity in the 2009 fiscal year.*