Game Theory Theodore L. TurocyTexas A&M UniversityBernhard von StengelLondon School of EconomicsCDAM Research Report LSE-CDAM-2001-09 October 8, 2001 Contents1 What is game Theory ?42 Definitions of games63 Dominance84 Nash equilibrium125 Mixed strategies176 Extensive games with perfect information227 Extensive games with imperfect information298 Zero-sum games and computation339 Bidding in auctions3410 Further reading38 This is the draft of an introductory survey of game Theory , prepared for theEncyclopedia of InformationSystems, Academic Press, to appear in inductionBackward induction is a technique to solve a game of perfect information. It first consid-ers the moves that are the last in the game, and determines the best move for the playerin each case.

Game theory is the formal study of decision-making where several players must make ... and established links with evolution and biology. Game theory received special attention ... theory, as an introduction to an interested reader without a background in economics. 5. 2 Deﬁnitions of games

1 Game Theory Theodore L. TurocyTexas A&M UniversityBernhard von StengelLondon School of EconomicsCDAM Research Report LSE-CDAM-2001-09 October 8, 2001 Contents1 What is game Theory ?42 Definitions of games63 Dominance84 Nash equilibrium125 Mixed strategies176 Extensive games with perfect information227 Extensive games with imperfect information298 Zero-sum games and computation339 Bidding in auctions3410 Further reading38 This is the draft of an introductory survey of game Theory , prepared for theEncyclopedia of InformationSystems, Academic Press, to appear in inductionBackward induction is a technique to solve a game of perfect information. It first consid-ers the moves that are the last in the game, and determines the best move for the playerin each case.

2 Then, taking these as given future actions, it proceeds backwards in time,again determining the best move for the respective player, until the beginning of the gameis knowledgeA fact is common knowledge if all players know it, and know that they all know it, andso on. The structure of the game is often assumed to be common knowledge among strategyA strategy dominates another strategy of a player if it always gives a better payoff tothat player, regardless of what the other players are doing. It weakly dominates the otherstrategy if it is always at least as gameAn extensive game (or extensive form game) describes with a tree how a game is depicts the order in which players make moves, and the information each player has ateach decision game is a formal description of a strategic theoryGame Theory is the formal study of decision-making where several players must makechoices that potentially affect the interests of the other strategyA mixed strategy is an active randomization, with given probabilities, that determines theplayer s decision.

3 As a special case, a mixed strategy can be the deterministic choice ofone of the given pure equilibriumA Nash equilibrium, also called strategic equilibrium, is a list of strategies, one for eachplayer, which has the property that no player can unilaterally change his strategy and geta better payoff is a number, also called utility, that reflects the desirability of an outcome to aplayer, for whatever reason. When the outcome is random, payoffs are usually weightedwith their probabilities. The expected payoff incorporates the player s attitude informationA game has perfect information when at any point in time only one player makes a move,and knows all the actions that have been made until player is an agent who makes decisions in a player is said to be rational if he seeks to play in a manner which maximizes his ownpayoff.

4 It is often assumed that the rationality of all players is common formA game in strategic form, also called normal form, is a compact representation of a gamein which players simultaneously choose their strategies. The resulting payoffs are pre-sented in a table with a cell for each strategy a game in strategic form, a strategy is one of the given possible actions of a player. Inan extensive game, a strategy is a complete plan of choices, one for each decision pointof the gameA game is said to be zero-sum if for any outcome, the sum of the payoffs to all players iszero. In a two-player zero-sum game, one player s gain is the other player s loss, so theirinterests are diametrically What is game Theory ?

5 Game Theory is the formal study of conflict and cooperation. Game theoretic conceptsapply whenever the actions of several agents are interdependent. These agents may beindividuals, groups, firms, or any combination of these. The concepts of game theoryprovide a language to formulate, structure, analyze, and understand strategic and impact of game theoryThe earliest example of a formal game-theoretic analysis is the study of a duopoly byAntoine Cournot in 1838. The mathematician Emile Borel suggested a formal Theory ofgames in 1921, which was furthered by the mathematician John von Neumann in 1928in a Theory of parlor games . Game Theory was established as a field in its own rightafter the 1944 publication of the monumental volumeTheory of games and EconomicBehaviorby von Neumann and the economist Oskar Morgenstern.

6 This book providedmuch of the basic terminology and problem setup that is still in use 1950, John Nash demonstrated that finite games have always have an equilibriumpoint, at which all players choose actions which are best for them given their opponents choices. This central concept of noncooperative game Theory has been a focal point ofanalysis since then. In the 1950s and 1960s, game Theory was broadened theoreticallyand applied to problems of war and politics. Since the 1970s, it has driven a revolution4in economic Theory . Additionally, it has found applications in sociology and psychology,and established links with evolution and biology . Game Theory received special attentionin 1994 with the awarding of the Nobel prize in Economics to Nash, John Harsanyi, andReinhard the end of the 1990s, a high-profile application of game Theory has been the designof auctions.

7 Prominent game theorists have been involved in the design of auctions for al-locating rights to the use of bands of the electromagnetic spectrum to the mobile telecom-munications industry. Most of these auctions were designed with the goal of allocatingthese resources more efficiently than traditional governmental practices, and additionallyraised billions of dollars in the United States and Theory and information systemsThe internal consistency and mathematical foundations of game Theory make it a primetool for modeling and designing automated decision-making processes in interactive en-vironments. For example, one might like to have efficient bidding rules for an auctionwebsite, or tamper-proof automated negotiations for purchasing communication band-width.

8 Research in these applications of game Theory is the topic of recent conference andjournal papers (see, for example, Binmore and Vulkan, Applying game Theory to auto-mated negotiation, NetnomicsVol. 1, 1999, pages 1 9) but is still in a nascent stage. Theautomation of strategic choices enhances the need for these choices to be made efficiently,and to be robust against abuse. Game Theory addresses these a mathematical tool for the decision-maker the strength of game Theory is themethodology it provides for structuring and analyzing problems of strategic choice. Theprocess of formally modeling a situation as a game requires the decision-maker to enu-merate explicitly the players and their strategic options, and to consider their preferencesand reactions.

9 The discipline involved in constructing such a model already has the poten-tial of providing the decision-maker with a clearer and broader view of the situation. Thisis a prescriptive application of game Theory , with the goal of improved strategic deci-sion making. With this perspective in mind, this article explains basic principles of gametheory, as an introduction to an interested reader without a background in Definitions of gamesThe object of study in game Theory is thegame, which is a formal model of an interactivesituation. It typically involves severalplayers; a game with only one player is usuallycalled adecision problem. The formal definition lays out the players, their preferences,their information, the strategic actions available to them, and how these influence can be described formally at various levels of detail.

10 Acoalitional(orcooper-ative) game is a high-level description, specifying only what payoffs each potential group,or coalition, can obtain by the cooperation of its members. What is not made explicit isthe process by which the coalition forms. As an example, the players may be severalparties in parliament. Each party has a different strength, based upon the number of seatsoccupied by party members. The game describes which coalitions of parties can form amajority, but does not delineate, for example, the negotiation process through which anagreement to vote en bloc is game theoryinvestigates such coalitional games with respect to the rel-ative amounts of power held by various players, or how a successful coalition shoulddivide its proceeds. 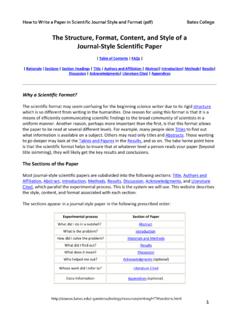 The Structure, Format, Content, and Style of a Journal ...

Mar 07, 2011 · sketch out the Introduction backwards ; start with the specific purpose and then decide what is the scientific context in which you are asking the question(s) your study addresses. Once the scientific context is decided, then you'll have a good sense of what level and type of general information with which the Introduction should begin.