Gentlemen Prefer Shares Using Credit Ratings When Buying Preferreds James Hymas W. ell I mentioned them in the July issue up our cash? We could lend $10,000 to the convenience and said they were important in the Sep- store and $40,000 to the bank. The latter amount will at tember issue, but I've never explained what least pay for groceries in our retirement if the worst hap- they are! How can an investor use them? pens to the store, while the store loan will pay as much How should an investor decide how to place his funds? interest for their loan of $10,000 as the bank does for our Credit Ratings are a very important part of investing in loan to it of $40,000. And this illustrates two points: that preferred Shares or any other fixed-income instrument diversification can increase your returns by allowing you to and they should be thoroughly understood before any in- put smaller chunks of money into better yielding invest- vestor entrusts his savings to a borrower.

1 Gentlemen Prefer Shares Using Credit Ratings When Buying Preferreds James Hymas W. ell I mentioned them in the July issue up our cash? We could lend $10,000 to the convenience and said they were important in the Sep- store and $40,000 to the bank. The latter amount will at tember issue, but I've never explained what least pay for groceries in our retirement if the worst hap- they are! How can an investor use them? pens to the store, while the store loan will pay as much How should an investor decide how to place his funds? interest for their loan of $10,000 as the bank does for our Credit Ratings are a very important part of investing in loan to it of $40,000. And this illustrates two points: that preferred Shares or any other fixed-income instrument diversification can increase your returns by allowing you to and they should be thoroughly understood before any in- put smaller chunks of money into better yielding invest- vestor entrusts his savings to a borrower.

2 Ments, and that even fixed-income investors can take small For a fixed-income investor, one of the primary consid- risks every now and then (though rarely as risky as those erations in portfolio construction is safety of principal. routinely undertaken in the stock market). Giving up the equity risk premium (the amount of extra Having made our decision that we're going to put return which one hopes to gain from stocks as opposed to $10,000 into a convenience store loan, we now need to bonds, in compensation for the extra risk) is a major and decide which convenience store it's going to be. How are potentially costly decision. Before retreating to the shelter we going to make this choice? To make a truly informed of bonds, we need to quantify the level of comfort we have choice, we need to know as much about each store as the that our loans will be repaid. owners do; considering the relatively small size of our in- We can understand the decision in qualitative terms.

3 Vestment, the investigation will take more time than the Given the choice of investing $50,000 in a bank account decision is worth. Due diligence can be extremely time con- rather than lending it to the proprietors of the nearest con- suming and expensive. venience store, we know that the bank is safer. The big banks And so (finally!) we consider the possibility of Using the in Canada are enormous and extremely profitable. Not only services of a Credit rating agency. As investors, we tell each that, but in the unlikely event that they do experience dif- store owner who wants to borrow our money that we want ficulties, deposits are guaranteed (with certain limits and their Credit rated before we loan them our money. No third conditions) by the Canadian Deposit Insurance Corpora- party Credit evaluation, no loan. Take it or leave it. We're tion (CDIC, ). On the other hand, the local not going to do all that work ourselves and we're not going convenience store could be bankrupted merely by the ap- to lend our money unless the work has been done.

4 Pearance of a newer and larger one in a slightly superior Such an agency should do everything that we would do location, no matter how loyal their clientele or how if we had time. We want them to look at the books of the hardworking the owners (which is one reason why I'm not companies, to talk to management, to consider the pros- in the convenience store business). If the borrower goes pects for competition, to think about what might happen under, then the investor will feel some pain. if the factory down the street closes and the store no longer So, you might think, this is an easy decision. The bank has 500 well-paid workers walking past it each day eve- will almost definitely pay our investment back with the rything that a diligent investor would worry about. At the agreed interest, while the convenience store is a more dubi- end of the process, they should form a judgment about the ous proposition.

5 Why wouldn't you pick the bank? Well, probability that the company will be able to meet its obli- for the sake of this argument, we'll assume that the bank is gations (the interest and the principal repayment) when offering 3% interest on deposits, while convenience stores they become due (according to the terms of the loan), and are offering 12%. That makes the decision a little harder convey that judgment to us and to all the company's other greed is now competing with fear! How about if we divide lenders in relatively simple terms. Canadian MoneySaver PO Box 370 Bath ON K0H 1G0 (613) 352-7448 OCTOBER 2006. And this is exactly what actual Credit rating agencies do, At the DBRS website we can click on the Rating Scale . except of course, they rate enormous companies, rarely any- tab, then Preferred Share to get an explanation of the thing as trivial as a single convenience store.

6 These Ratings various levels of Credit quality into which DBRS catego- are then provided to investors by the agencies; the investors rizes each issue they rate. In the preferred share market, the then have available to them a much more thorough analy- term Investment Grade is generally taken as meaning from sis of the relative safety of their potential investment than Pfd-1(high) to Pfd-2(low), inclusive. In my research with they would typically be able to achieve by themselves. the quantitative HIMIPref software, I have found that The agencies are paid by the companies they rate. This issues rated lower than Pfd-2(low) do not trade in nearly as may seem at first glance like an impossible conflict of in- well defined a manner with respect to the yield curve as do terest to overcome, but what the agencies are selling is the those of Investment Grade . The lower the rating, the more ability of those who use their Ratings to make or break the fixed-income instruments behave like equities!

7 Success, and the cost, in terms of the interest rate that will Retail investors, unable to diversify their risk efficiently have to be offered for a fixed-income issue. If an agency's by holding a large number of issues, should stick to issues analyses are deemed unreliable, investors will no longer care rated Pfd-1 and Pfd-2. If you're only going to hold one or just how that agency rates any particular company; having two issues, I recommend sticking just to the Pfd-1 issues, a rating from such and such an agency will no longer have which usually means the banks. You may be giving up a an influence on the pricing of new issues; issuers will there- little bit of yield, but the great objective in fixed-income fore no longer bother to hire the agency; and the agency investing is to sleep well; eating well is a secondary consid- will go bankrupt through loss of business. It's an indirect eration.

8 Investors should also monitor their portfolio's Credit system of reward for accuracy, but it works. Ratings on a regular basis the world can change, business Some investors supplement (or even replace) the work conditions can change and companies can change. Any- of Credit rating agencies with their own work. The banks, body who got ten cents on the dollar for their Air Canada for instance, have developed an impressive body of exper- bonds can attest to that. tise to determining the risk involved in loaning money, for How much yield will you have to give up for a restric- obvious reasons, and this expertise is often put to use for tion to Pfd-1 issues? The answer depends upon the type of the benefit of bank-employed portfolio managers who in- preferred share chosen for investment (retractible vs. per- vest in the public debt markets on their clients' behalf. petual, as discussed in the June 2006 issue, is just where the Other portfolio managers and interested parties also de- questions about type start), the expected term of the in- velop proprietary systems to evaluate Credit risk.

9 The Bank of struments compared many factors that come into play, Canada, for instance, recently published some of the results but you can gain an idea of the spreads involved by inspec- of its research (Working Paper 2006-28 Estimation of the tion of Chart 1, Yield-to-Worst vs. Term-to-Worst . Default Risk of Publicly Traded Canadian Companies , online In this chart, Yield-to-Worst (YTW) has been calcu- at lated as explained in Yield Ahead (in the July/August 2006. ). Moody's RiskCalc is a well issue). Term-to-Worst is simply the time in years from known commercially available system. And Altman's Z-Score is discussed and calcu- Chart 1. lated all over the Internet (start with http:/. !). This level of sophistication is all very well and good for institutional investors, for whom a basis point ( bp , one-one- hundredth of a percentage point) can be worth millions, but individual investors are well served Using the public agency Ratings . 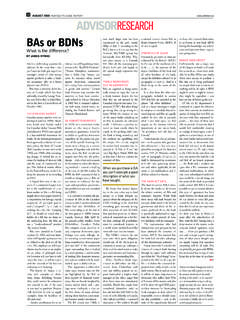 Here’s a skill-testing question for advisors: In the event that a ma-jor Canadian bank gets wiped out overnight, which of their money market products is safer, a bank- 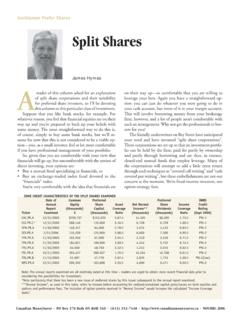 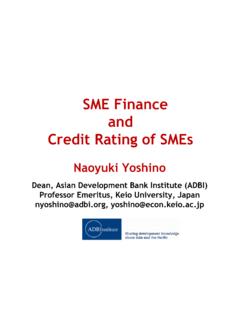 l Risk analysis Is 8% for all seasons? - dmrra.com

WWW.RISK.NET MAY 2003 RISK 85 l Risk analysis I n recent months, this column has con-sidered how introducing greater risk sensitivity into the Basel capital Accord could accentuate the business cycle. 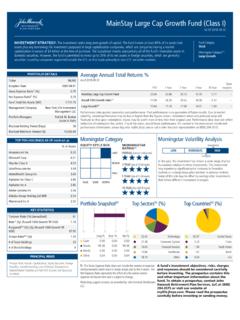 MainStay Large Cap Growth Fund (Class I) AS OF 2018-06-30 INVESTMENT STRATEGY: The investment seeks long-term growth of capital.The fund invests at least 80% of its assets (net