Global Panel on Agriculture and Food Systems for …

Global Panel on Agriculture and food Systems for Nutrition Working Paper The economics of reducing malnutrition in Sub-Saharan Africa1. John Hoddinott Cornell University This version: May 13, 2016. 1. Work for this paper has been funded by the Global Panel on Agriculture and food Systems for nutrition and the UK Department for International Development through its funding of the Transform Nutrition Consortium. 1 / 21. Address for correspondence: Savage Hall, Room 305, Division of Nutritional Sciences, Cornell University, Ithaca, NY, USA, 14853. Tel: 607 255 8443, email: 2 / 21. Summary reducing malnutrition in Africa has both intrinsic and instrumental value. Better nourished populations are more economically productive. Children better nourished during the first 1000 days (in utero and the first two years of life) will be more productive as adults, increasing country GDP. Malnutrition costs African economies between 3 and 16 percent of GDP annually. For an illustrative set of 15 African countries, meeting the 2025 World Health Assembly target for stunting will add 83.

System, Food, Agriculture, Reducing, On agriculture and food systems for

1 Global Panel on Agriculture and food Systems for Nutrition Working Paper The economics of reducing malnutrition in Sub-Saharan Africa1. John Hoddinott Cornell University This version: May 13, 2016. 1. Work for this paper has been funded by the Global Panel on Agriculture and food Systems for nutrition and the UK Department for International Development through its funding of the Transform Nutrition Consortium. 1 / 21. Address for correspondence: Savage Hall, Room 305, Division of Nutritional Sciences, Cornell University, Ithaca, NY, USA, 14853. Tel: 607 255 8443, email: 2 / 21. Summary reducing malnutrition in Africa has both intrinsic and instrumental value. Better nourished populations are more economically productive. Children better nourished during the first 1000 days (in utero and the first two years of life) will be more productive as adults, increasing country GDP. Malnutrition costs African economies between 3 and 16 percent of GDP annually. For an illustrative set of 15 African countries, meeting the 2025 World Health Assembly target for stunting will add 83.

2 Billion dollars to national incomes. Interventions that prevent malnutrition are excellent investments;. for a typical African country, every dollar invested in reducing chronic undernutrition in children yields a $16 return. Reductions in malnutrition will occur most rapidly when countries undertake investments in both nutrition-specific and nutrition-sensitive interventions. Background Nutrition has always been important to development. Good nutrition allows for healthy growth and development of children, inadequate nutrition is a major contributing factor to child mortality and obesity leads to poor health and premature death. Put simply, improving nutrition is intrinsically valuable. A large and growing body of evidence now shows that good nutrition is also important for economic development Malnutrition encompasses both undernutrition and overweight/obesity; see Box 1. While there have been improvements since 2000, undernutrition in sub-Saharan Africa remains pervasive. Across Africa, 56 million (36 percent) of children under the age of 5 are chronically undernourished and as of 2013, no country had a stunting prevalence of less than 19 percent.

3 More than 13 million are acutely undernourished ( percent). Micronutrient deficiencies in children under five are also widespread: 41 percent of children are Vitamin A deficient; 40 percent are iodine deficient; 20 percent suffer from iron deficient anemia; and 24 percent are zinc deficient (Black et al, 2013). Undernutrition is a direct consequence of diets lacking in sufficient quantities of high quality nutrients and of illness. Obesity is the consequence of excess caloric intake relative to energy use. While the prevalence of obesity across much of sub-Saharan Africa is low, there are places and groups (such as adult women in southern Africa) where it is rising rapidly (Ng et al, 2014). 3 / 21. Box 1: What do we mean by malnutrition? Malnutrition has two dimensions: undernutrition and overweight/obesity. Undernutrition reflects inadequate intake of nutrients: calories, proteins and micronutrients. There are two manifestations of undernutrition: anthropometry (height and weight); and micronutrient deficiency.

5 It is well understood that Africa's future economic success lies in increasing human capital schooling, knowledge and skills that will allow Africans to compete and thrive in a Global economy. Human capital is an important determinants of labour productivity; raising labour productivity lies at the heart of raising incomes across Africa. In debates regarding African economic development strategies, it had long been assumed that increasing human capital comes about through investments in the formal education system but this is only partially true. Investments in nutrition particularly in the nutrition of very young children are equally important. To understand the economic effects of malnutrition, it is helpful to begin with a specific form, chronic undernutrition in the first 1000 days (pregnancy and the first two years of life). There is abundant evidence that this has long term adverse consequences. One manifestation of these is attained stature in adulthood. Data from Brazil, Guatemala, India, the Philippines, Senegal, South Africa and Zimbabwe (Stein et al, 2010; Alderman et al, 2006) all show that growth failure in the first 24 months of life is associated with reduced stature in adulthood.

6 The magnitudes of this loss of growth can be large. In Senegal, men who were stunted when they were two years old were cm shorter in adulthood compared to men who were not stunted. The economic consequences are captured by evidence showing associations between height and outcomes in the labor market. A. useful rule of thumb is that every loss of one percent of attained height in adulthood reduces adult earnings by 4 / 21. Even more importantly, chronic undernutrition has neurological consequences that lead to cognitive impairments see Box 2. These cognitive impairments result in children starting school later, dropping out earlier and attaining fewer grades of schooling. Longitudinal studies that have followed individuals for several decades show that, in adulthood, those persons who were chronically undernourished as pre-schoolers scored poorly on tests of cognitive ability. They earned lower wages and, for women, had more children (Hoddinott et al, 2013). These economic losses also occur if we consider micronutrient deficiencies.

7 Both iodine deficiency and iron deficient anemia lead to cognitive damage. Iodine deficiency in childhood adversely affects psychomotor skill development (think movement, balance, fine motor skills) and there is some evidence linking it to slowed physical growth. A series of meta-analyses suggest that iodine deficiency results in a loss of 13-15 IQ points. Horton and Ross (2003) estimate that iron deficiencies cost African economies between and percent of GDP annually. These links poor nutrition to damaged cognitive abilities to poorer schooling outcomes to poor cognitive abilities in adulthood to lower economic productivity are the economic rationale for investing in efforts to reduce malnutrition. Box 2: How does chronic undernutrition affect cognitive abilities, schooling and wages? Undernutrition in early life damages children's brains. Early life malnutrition damages the hippocampus by reducing dentrite density (Dentrites are branch like structures, which receive signals sent along axons.)

8 This adversely affects spatial navigation and memory formation. In severely malnourished children, dentrites in the occipital lobe (responsible for the processing of visual information) and in the motor cortex are shorter, having fewer spines and greater numbers of abnormalities; consequently, chronic malnutrition leads to delays in the evolution of locomotor skills. Malnutrition results in reduced myelination of axon fibers thus reducing the speed at which signals are transmitted. Lastly, early-life undernutrition decreases the number of neurons in the locus coeruleus which plays a role in signaling the need to inhibit the production of cortisol. Thus early-life malnutrition diminishes the ability to exhibit down regulation and handle stressful situations. The cognitive impairments experienced in early life have long-term consequences. Two studies one in Guatemala and one in Zimbabwe have traced children from infancy (when their nutritional status was first measured) to adulthood.

9 In both countries, a one standard deviation increase in Height-for-Age z (HAZ) scores increases grade attainment by approximately grades; in Zimbabwe, shifting a child from being stunted to being well-nourished would increase schooling by grades. In Guatemala, a one standard deviation increase in HAZ increases adult test scores for reading and nonverbal cognitive skills by and SDs respectively. In Guatemala, an additional grade of schooling raises wages by nine percent and that an increase of one standard deviation in tests of reading and vocabulary raises wages by 35 percent. The economic consequences of these cognitive impairments arise because of the well-documented links between schooling, cognitive skills and earnings and income in adulthood. 5 / 21. Do economic benefits justify investments that reduce undernutrition? Poor nutrition kills. But faced with multiple demands on limited resources, and the overarching need to raise economic growth rates, how strong is the economic case for investments that reduce undernutrition?

10 There are three complementary ways of answering this question: Measuring the cost of doing nothing in terms of lost GDP; measuring the benefits of working towards the World Health Assembly targets for nutrition; and by calculating the benefit: cost ratios associated with investments in nutrition. A number of African governments have attempted to estimate the costs of hunger and malnutrition in terms of lost GDP. Seven African countries participated in an exercise to quantify the impact of undernutrition across individuals of different ages. These were: ages 0-5 economic costs associated with higher prevalence of illness and increased mortality; ages 6-18 economic costs associated with higher rates of grade repetition and increased dropout; and ages 15-64 economic costs associated with lower productivity arising from reduced physical capacity and lower levels of schooling (Government of Ethiopia, 2013). The median estimate is a loss of percent of GDP (Table 1). Table 1: Annual cost of undernutrition: National estimates Country Annual cost of undernutrition (% of GDP). 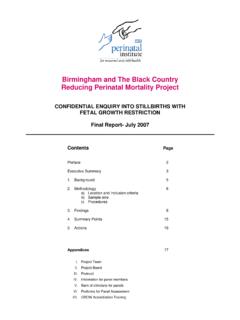 Birmingham and The Black Country Reducing … 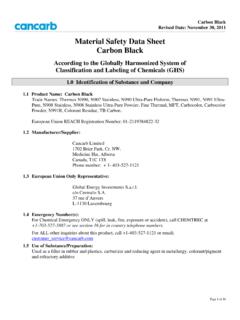 Race and Economic Opportunity in the United States

Race and Economic Opportunity in the United States Executive Summary The Equality of Opportunity Project 3 Finding #2: The black-white income gap is entirely driven by 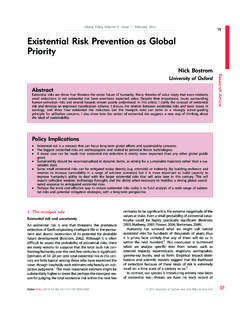 Existential Risk Prevention as Global Priority Nick Bostrom University of Oxford Abstract Existential risks are those that threaten the entire future of humanity. 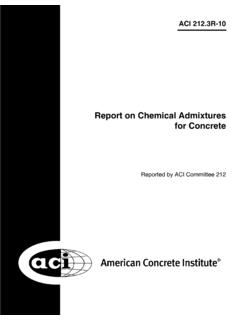 Report on Chemical Admixtures for Concrete - …