GLOSSARY OF FASTENER TERMS . ALLOWANCE commercial products such as machine screws, bolts, The prescribed difference between the design size nuts, and studs for most interchangeable equipment (maximum material) and the basic size. parts and structural applications. It is estimated that TECHNICAL. over 90 percent of inch FASTENER series in Canada and BASIC PROFILE the United States have class 2A and 2B threads. The cyclical outline, in an axial plane, of the permanently established boundary between the Class 3A and 3B. provinces of the external and internal threads. All Class 3A and 3B threads have no specific allowance deviations are with respect to this boundary. and are manufactured to restrictive tolerances. These classes of threads are intended for exceptionally high- BASIC SIZE grade commercial products such as socket cap That size from which the limits of size are derived by screws, set screws, aerospace bolts and nuts, and the application of allowances and tolerances.

1 GLOSSARY OF FASTENER TERMS . ALLOWANCE commercial products such as machine screws, bolts, The prescribed difference between the design size nuts, and studs for most interchangeable equipment (maximum material) and the basic size. parts and structural applications. It is estimated that TECHNICAL. over 90 percent of inch FASTENER series in Canada and BASIC PROFILE the United States have class 2A and 2B threads. The cyclical outline, in an axial plane, of the permanently established boundary between the Class 3A and 3B. provinces of the external and internal threads. All Class 3A and 3B threads have no specific allowance deviations are with respect to this boundary. and are manufactured to restrictive tolerances. These classes of threads are intended for exceptionally high- BASIC SIZE grade commercial products such as socket cap That size from which the limits of size are derived by screws, set screws, aerospace bolts and nuts, and the application of allowances and tolerances.

2 Connecting rod bolts where close or snug fit for preci- BEARING SURFACE sion is essential, as well as in applications where safe- The bearing ty is a critical design feature. surface is the CLEARANCE FIT. supporting or The maximum material condition clearance between locating surface mating assembled parts. of a FASTENER with respect to the part which it fastens (mates). COLD WORKING. The loading of a FASTENER is usually through the bearing Cold working is the plastic deformation of metals at surface. temperatures below that which will cause recrystalliza- tion. This cold working is accompanied by an increase BODY DIAMETER in strength and hardness, called work hardening, and The body diameter a decrease in ductility. The cold working effects of is the diameter of forming bolt and screw heads, of extruding bolt shanks, the body of a and of roll threading increase strength values, often threaded FASTENER .

3 Considerably. CHAMFER CONE POINT. The conical surface at the starting end of a thread. A cone point is CHAMFER POINT a sharp conical A chamfer point point designed to is a truncated perform perfo- cone point, the rating or aligning functions at assembly. end of which is COUNTERSINK. approximately Flare or bevel at the hole end. flat and perpendicular to the FASTENER axis. These points on threaded fasteners generally have point CUT THREAD. included angles of 45 to 90 degrees and a point diam- Threads are cut or chased so that the unthreaded por- eter equal to or slightly less than the minor diameter of tion of shank is equal to major diameter of the thread. the thread. This point is intended to facilitate entry of fasteners into holes at assembly. ELEMENT. Elements of a thread are flank angle, root, crest, pitch, CLASS OF THREAD lead angle, surface finish, major, minor, and pitch An alphanumerical designation to indicate the standard diameters.

4 Grade of tolerance and allowance specified for a thread. EXTERNAL THREAD. Class 1A and 1B A screw thread formed on the outside of a cylindrical Classes 1A and 1B are very loosely toleranced, there- surface. fore, this class produces the loosest fit; that is, the greatest amount of play in assembly. An allowance is FASTENER . applied to the external thread in class 1A and 1B. This A FASTENER is a mechanical device for holding two or more class is ideally suited where quick and easy assembly bodies in definite positions with respect to each other. is of prime design concern. FULL OR NOMINAL. Class 1A and 1B is standard for only coarse and fine DIAMETER BODY. threads with sizes of 1/4 inch and larger. Very few A full or nominal diameter body is a body the diameter fasteners produced in Canada and the United States of which is generally within the dimensional limits of the have this class of fit.

5 Major diameter of the thread. Sometimes referred to as full size body'. Class 2A and 2B. Class 2A and 2B is the most common thread class GIMLET POINT. specified for inch series fasteners. Class 2A for A gimlet point is a external threads has an allowance while class 2B for threaded cone internal threads does not. Class 2A and 2B threads point usually having offer excellent value of fit when considering manufac- a point angle of 45. turing conveniences and economy, against FASTENER to 50 degrees. It is used on thread forming screws such performance. This class offers a good grade of as Type AB' tapping screws, wood screws, lag screws, etc. PROFESSIONALS SERVING PROFESSIONALS 1. GLOSSARY OF FASTENER TERMS . GRADES OF FASTENERS MAJOR DIAMETER. In the SAE system, grades are designated by On an internal thread, the diameter at the root and on numbers from 1 through 8.

6 These numbers have no an external thread the major diameter is the diameter TECHNICAL. quantitative relationship to strength properties, except at the thread crest. that increasing numbers represent increasing tensile strengths. Decimals after whole numbers indicate the MINOR DIAMETER. same basic properties, with variations in either On an internal thread, the diameter at the crests and on material or processing treatment. The ASTM grades an external thread, the diameter at the root. are designated by their document number. Some of the NOMINAL SIZE. ASTM standards describe two or more types or grades The designation which is used for the purpose of with the difference being either a variation of material general identification. The basic major diameter of a for example, ASTM A325 Types 1, 2 and 3 or modi- threaded FASTENER is often referred to as nominal size'.

7 Fied properties of the same material ASTM A307. Grades A and B. PHYSICAL PROPERTIES. Physical properties are the properties defining the HEAD basic characteristics of the material or FASTENER . The head of a PITCH. FASTENER is the The pitch of a thread having uniform spacing is the enlarged shape distance, measured parallel to its axis, between preformed on corresponding points on adjacent thread forms in the one end of a headed FASTENER to provide a bearing surface. same axial plane and on the same side of the axis. Pitch is equal to the lead divided by the number of HIGH STRENGTH FASTENER thread starts. A high strength FASTENER is a FASTENER having high tensile and shear strengths attained through POINT. combinations of materials, work-hardening and heat The point of a FASTENER is the treatment.

8 Configuration of HEAT TREATMENT the end of the The strength and ductility of metals can be significantly shank of a altered by various types of heating operations. Heat headed fasten- treatment refers to any of a number of operations er or of each involving the heating of the parts in appropriate end of a headless FASTENER . furnaces, gas fired or electric, often with controlled PROOF LOAD. atmosphere, and the subsequent cooling at controlled Proof load represents the maximum useable load limit rates. In the manufacture of fasteners the strength and of the FASTENER for many design-service applications. ductility of the parts can in this way be adjusted, within Proof load is commonly defined as the tension applied limits, to fit the particular application. load which the FASTENER must support without evidence INCOMPLETE THREAD of any deformation.

9 Often, proof load and yield strength Threads having crests or roots not fully formed. are interpreted as being the same. Incomplete threads occur at the end of pointed external- Note: Proof load is a force measurement. The units ly threaded products, at countersinks in the faces of are pounds or newton. Yield strength is a stress threaded holes or nuts, and at thread runouts where the measurement. The units are PSI or MPa. The stress at threaded section blends into the unthreaded shank. the proof load is 90-93% of the yield strength. THREAD REFERENCE DIMENSION. A thread is a portion of a screw thread encompassed A dimension usually without tolerance, used for by one pitch. On a single-start thread it is equal to one information purposes only. It does not govern turn.

10 Production or inspection operations. A reference dimension is derived from other values shown on the MAJOR CYLINDER drawing or on related drawings. An imaginary cylinder that would bound the crests of an external straight thread or the roots of an internal RIGHT-HAND THREAD. straight thread. A thread is right-hand if, when viewed end-on, it winds in a clockwise and receding direction. A thread is METHODS OF MANUFACTURE considered to be right-hand unless specifically Threads are indicated. either rolled or cut the former ROLLED THREAD. increases the Threads are cold formed by squeezing the blank major diameter between reciprocating serrated dies. This acts to of the thread increase the major diameter of the thread over and over the diameter of the unthreaded shank; the latter, above the diameter of unthreaded shank (if any). 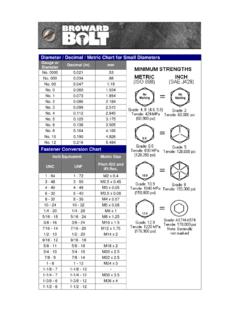 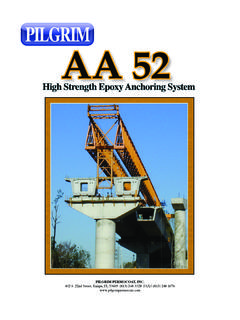 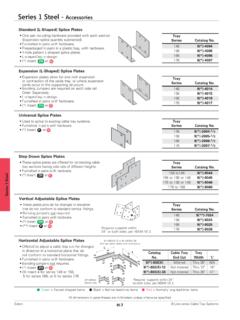 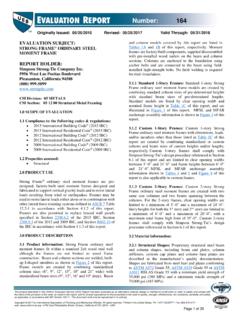 Number: 164 Originally Issued: 05/25/2010 Revised: 05/25/2017 Valid Through: 05/31/2018 The product described in this Uniform Evaluation Service (UES) Report has been evaluated as an alternative material, design or method of construction in order to satisfy and comply with