Gram s Serendipitous Stain In spite of his defective method, his name lives on .. Jay Hardy , CLS, SM (ASCP) hile working with infected lung tissue from cadavers, a Danish pathologist stumbled upon a remarkable technique that that is still in common usage over 100 years later. How did this come about? Hans Christian Gram (born in 1853) studied botany at the University of Copenhagen in Denmark. His study of plants introduced him to the basis of pharmacology and the use of the microscope. In 1883, he graduated from medical school and after traveling throughout Europe, he settled in Berlin. His initial work concerned the study of human red blood cells. He was among the first to recognize that macrocytes were characteristic of pernicious anemia.

1 Gram s Serendipitous Stain In spite of his defective method, his name lives on .. Jay Hardy , CLS, SM (ASCP) hile working with infected lung tissue from cadavers, a Danish pathologist stumbled upon a remarkable technique that that is still in common usage over 100 years later. How did this come about? Hans Christian Gram (born in 1853) studied botany at the University of Copenhagen in Denmark. His study of plants introduced him to the basis of pharmacology and the use of the microscope. In 1883, he graduated from medical school and after traveling throughout Europe, he settled in Berlin. His initial work concerned the study of human red blood cells. He was among the first to recognize that macrocytes were characteristic of pernicious anemia.

2 In 1884, while examining lung tissue from patients who had died of pneumonia, Gram had discovered that certain stains were preferentially taken up and retained by bacterial cells. In the first step, he dried a fluid smear on a glass slide over a burner flame and poured Gentian (crystal) violet solution over it. After rinsing with water, he added Lugol s solution - potassium triiodide solution - which acted as a mordant to fix the dye. Then he poured ethanol over the slide to wash away the dye. Certain bacteria (pneumococci) retained the color (gram-positive), while other species became bleached or de-colorized by the alcohol (gram-negative). His initial work with this staining process was performed on Streptococcus pneumoniae and Klebsiella pneumoniae.

3 Gram was a modest man, and in his initial publication he remarked, "I have therefore published the method, although I am aware that as yet it is very WJay Hardy is the founder and CEO of Hardy Diagnostics . He began his career in microbiology as a Medical Technologist in Santa Barbara, California. In 1980, he began manufacturing culture media for the local hospitals. Today, Hardy Diagnostics is the third largest media manufacturer in the US. To ensure rapid and reliable turn around time, Hardy Diagnostics maintains six distribution centers, and produces over 2,700 products used in clinical and industrial microbiology laboratories throughout the world. I am aware that as yet it is very defective and imperfect Hans Christian Gramdefective and imperfect; but it is hoped that also in the hands of other investigators it will turn out to be useful.

4 " Gram did not use a counterstain in his procedure. It was a few years later, that the German pathologist Carl Weigert (1845-1904) from Frankfurt, added a final step of staining with safranin. Gram himself never used the red counterstaining in order to visualize the gram-negative bacteria. In 1891, Gram became a lecturer in pharmacology, and later that year was appointed professor at the University of Copenhagen. In 1900 he resigned his Chair in Pharmacology to become Professor of Medicine. The king of Denmark awarded him the Dannebrog Commander s Cross, first-class in 1912, and the Golden Medal of Merit in 1924. He retired in 1923 and died in 1938. The staining technique he developed is still the most important method for distinguishing between two major classes of bacteria.

5 His discovery in 1884 occurred during the golden years of clinical microbiology. This is when Petri plates were invented (1887), Agar was discovered (1881), and Pasteur and Koch were at their peak of performance, discovering the etiologic agents of many of the vexing diseases of that day. In spite of his modesty and doubts of success, this technique, the Gram Stain , continues to be a standard procedure for bacterial classification in medical microbiology today. The Gram Stain Mechanism What makes some cells retain crystal violet (Gram positive) while others readily release the Stain when alcohol is added (Gram negative)? Gram-positive bacteria have a thick mesh-like cell wall made of peptidoglycan (50-90% of cell wall), which Stain purple and Gram-negative bacteria have a thinner layer (10% of cell wall), which Stain pink.

6 Gram-negative bacteria also have an additional outer membrane which contains lipids, and is separated from the cell wall by the periplasmic space. There are four basic steps of the Gram Stain , which include applying a primary Stain (crystal violet) to a heat-fixed smear of a bacterial culture, followed by the addition of a mordant (Gram's iodine), rapid decolorization with alcohol or acetone, and counterstaining with safranin or basic fuchsin. Crystal violet (CV) dissociates in aqueous solutions into CV+ and chloride (Cl ) ions. These ions penetrate through the cell wall and cell membrane of both Gram-positive and Gram-negative cells. The CV+ ion interacts with negatively charged components of bacterial cells and stains the cells purple.

7 Iodine (I or I3 ) interacts with CV+ and forms large complexes of crystal violet and iodine (CV I) within the inner and outer layers of the cell. When a decolorizer such as alcohol or acetone is added, it interacts with the lipids of the cell membrane. A Gram-negative cell will lose its outer membrane and the peptidoglycan layer is left exposed. The CV I complexes are washed from the Gram-negative cell along with the outer membrane. In contrast, a Gram-positive cell becomes dehydrated from an ethanol treatment. The large CV I complexes become trapped within the Gram-positive cell due to the multilayered nature of its peptidoglycan. The decolorization step is critical and must be timed correctly; the crystal violet Stain will be removed from both Gram-positive and negative cells if the decolorizing agent is left on too long (a matter of seconds).

8 After decolorization, the Gram-positive cell remains purple and the Gram-negative cell loses its purple color. Counterstain, which is usually positively-charged safranin or basic fuchsin, is applied last to give decolorized Gram-negative bacteria a pink or red color. An Imperfect Method procedure, and caution must be exercised. In addition, for all bacteria stained using the Gram Stain , the age of the culture may influence the results of the Stain as seen in the photo above. Some bacteria, after staining with the Gram Stain , yield a Gram-variable pattern: a mix of pink and purple cells are seen. The genera Actinomyces, Arthobacter, Corynebacterium, Mycobacterium, and Propionibacterium have cell walls particularly sensitive to breakage during cell division, resulting in Gram-negative staining of these Gram-positive cells.

9 The staining of these organisms result in an uneven or granular appearance. Using improved formulations, such as Gram Stain Advanced will help in overcoming some of these problems. Jay Hardy , CLS, SM (ASCP) Santa Maria, CA In cultures of the Gram-positive Bacillus, Butyrivibrio, and Clostridium, a decrease in peptidoglycan thickness during growth coincides with an increase in the number of cells that Stain Gram-negative. For this reason, these organisms are very prone to over-decolorization in the acetone-alcohol rinse step of the Bacillus spp showing ambiguous staining results. Older cells readily decolorize and will appear gram negative, while the younger cells retain their gram positive nature.

Hardy Diagnostics has been in business for 37 years. Jay Hardy, a Clinical Laboratory Scientist, founded the company in the Central Coast of California in 1980. The Origin of Handwashing - Hardy Diagnostics 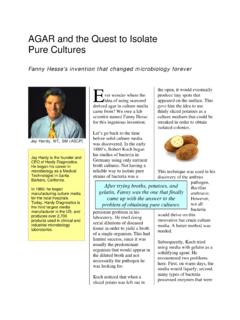 AGAR and the Quest to Isolate Pure Cultures 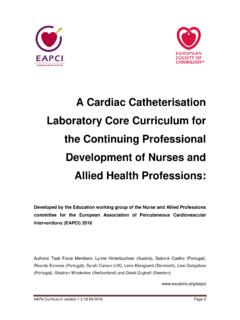 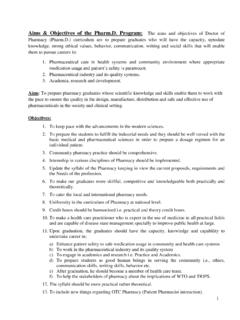 Aims & Objectives of the Pharm.D. Program

1 Aims & Objectives of the Pharm.D. Program: The aims and objectives of Doctor of Pharmacy (Pharm.D.) curriculum are to prepare graduates who will have the capacity, uptodate