gras Flavoring Substances The 20th publication by the Expert Panel of the Flavor and Extract Manufacturers Association on recent progress in the consideration of Flavoring 20. ingredients generally recognized as safe under the Food Additives Amendment Smith, J. Doull, Feron, Goodman, Munro, Newberne, Portoghese, Waddell, Wagner, Adams, and McGowen Robert L. Smith, Chairman of the FEMA Expert Panel, is Professor, Molecular Toxicology, Imperial College School of Medicine, University of London, South Kensington, London SW7 2AZ, United Kingdom. Other members of the FEMA Expert Panel are: John Doull, Professor Emeritus, I n 1958, Congress enacted the Food Additives Amendment (FAA) to the Federal Food, Drug, and Cosmetics Act amid growing concern over the safety of substances added to foods. The FAA set forth standards and guidelines by which the safety of food additives must be University of Kansas Medical School, Kansas City; Victor established before they can be added to foods (FAA, 1958).

36 FOODTECHNOLOGY DECEMBER 2001 • VOL. 55, NO. 12 GRAS Flavoring Substances 20 Of the two comprehensive studies of flavor intake undertaken over the past three decades, one involves a detailed di-

1 gras Flavoring Substances The 20th publication by the Expert Panel of the Flavor and Extract Manufacturers Association on recent progress in the consideration of Flavoring 20. ingredients generally recognized as safe under the Food Additives Amendment Smith, J. Doull, Feron, Goodman, Munro, Newberne, Portoghese, Waddell, Wagner, Adams, and McGowen Robert L. Smith, Chairman of the FEMA Expert Panel, is Professor, Molecular Toxicology, Imperial College School of Medicine, University of London, South Kensington, London SW7 2AZ, United Kingdom. Other members of the FEMA Expert Panel are: John Doull, Professor Emeritus, I n 1958, Congress enacted the Food Additives Amendment (FAA) to the Federal Food, Drug, and Cosmetics Act amid growing concern over the safety of substances added to foods. The FAA set forth standards and guidelines by which the safety of food additives must be University of Kansas Medical School, Kansas City; Victor established before they can be added to foods (FAA, 1958).

2 J. Feron, TNO Nutrition and Food Research Institute, The FAA contained an exclusion provided by Congress for substances Professor Emeritus, Utrecht University, The Netherlands;. generally recognized, by experts qualified by scientific training and expe- rience to evaluate its safety, as having been adequately shown through sci- Jay I. Goodman, Professor, Michigan State University, entific procedures .. to be safe under the conditions of intended use.. East Lansing; Ian C. Munro, Consultant, Toxicologist and Based on this, substances generally recognized as safe ( gras ) are not Principal, Cantox Health Sciences, Inc., Mississauga, considered to be food additives, and are excluded from mandatory pre- Ontario, Canada; Paul M. Newberne, former Co- market approval by the Food and Drug Administration (FDA). However, Chairman of the FEMA Expert Panel and now retired, gras substances must meet strict criteria specified by Congress (Degnan, Professor Emeritus, Dept.)

3 Of Pathology, School of 1991). Medicine, Boston University, Boston, Mass.; Philip S. As a result, in 1960, the Flavor and Extract Manufacturers Association Portoghese, Professor, College of Pharmacy, University of of the United States (FEMA) created the FEMA gras program in which Minnesota, Minneapolis; William J. Waddell, Professor the safety of flavor ingredients would be evaluated for potential gras sta- and Chair, Emeritus, Dept. of Pharmacology and tus by an independent panel of experts in the fields of chemistry, toxicolo- Toxicology, University of Louisville School of Medicine, gy, pharmacology, medicine, pathology, and flavor safety assessment. The conclusions of the Expert Panel would be provided to FDA, the food and Louisville, Ky.; and Bernard M. Wagner, Emeritus flavor industries, and the public. FDA has acknowledged the validity of the Research Professor of Pathology, New York University FEMA gras program and has recognized the FEMA gras publications Medical Center, New York, ; Timothy B.

4 Adams is as reliable industry gras lists within the context of the agency's bulk Scientific Director of, and Margaret M. McGowen is labeling regulations for flavors codified at 21 CFR Sec. (b) (2001). associated with, the Flavor and Extract Manufacturers FDA expressed significant support for the FEMA gras program in the Association, 1620 I St., , Suite 925, Washington, DC preamble to its proposed voluntary gras notification program (FDA, 20006. Send reprint requests to author Smith. 1997). 34 FOODTECHNOLOGY DECEMBER 2001 VOL. 55, NO. 12. The FEMA gras lists have been pub- calculating human dietary exposure to pense of obtaining accurate intake data, lished in Food Technology since 1960 (see Flavoring substances and critically re- requiring detailed dietary analysis of a sidebar on p. 44). views the results of chronic two-year large enough group of people to obtain The gras assessment performed by bioassay studies performed at the Na- statistically significant results for the di- the Expert Panel includes a rigorous eval- tional Toxicology Program (NTP) for verse population of eaters.

5 Uation of all the available data on flavor methyl eugenol (FEMA No. 2475) and For more than 40 years, government ingredients and structurally related sub- citral (FEMA No. 2303). regulators, scientists, and food industry stances. The analyses include a compre- experts have proposed various methods hensive evaluation of the potential expo- Estimation of Intake/Exposure of estimating exposure to Flavoring sub- sure to the flavor ingredients through to Flavoring Substances stances in food. Initially, exposure was food compared with toxicologic and As food technology progresses, its calculated using a method called the pharmacokinetic characteristics. As ad- impact on the human diet becomes possible average daily intake (PADI), vancements are made in science, new in- more evident. The global food supply which is based on the levels of Flavoring formation becomes available on existing has grown to depend on the quantity, substances added to foods and the FEMA gras Flavoring substances.

6 The quality, and variety of wholesome and amounts of those foods consumed (see dynamic FEMA gras assessment process nutritious foods produced through sci- below). Unfortunately, this approach incorporates this new information into entific advancements in this field. The fails to incorporate the many complexi- the program by way of systematic reviews use of preservatives, color additives, and ties associated with human consump- of all gras flavor ingredients. Flavoring agents by manufacturers plays tion patterns and the food supply, usu- Between 1965 and 1985, the first com- ally resulting in exaggerated overesti- prehensive and systematic scientific liter- mates of intake. ature reviews (SLRs) of Flavoring sub- stances were completed by FEMA. These The gras assessment .. The current methods for determin- ing exposure to Flavoring substances are SLRs served as the basis for a comprehen- includes a rigorous evalu- the estimated PADI in the and the sive review of substances already desig- theoretical added maximum daily intake nated as FEMA gras .

7 This gras status ation of all the available (TAMDI) in Europe from use of the reassessment program was known as substance as a Flavoring agent. The PADI. gras affirmation or GRASa and was data on flavor ingredients is determined by (1) multiplying usual completed in 1985. use levels of the substance in each of 33. In 1994, the Expert Panel initiated a and structurally related food categories ( , baked goods and second comprehensive reassessment pro- gram known as gras reaffirmation or substances. meat products) by the average amount of that food category consumed daily GRASr. It is anticipated that this reaf- and (2) summing the intake over all 33. firmation program will be completed in an important role in sustaining and ex- food categories (USDA/ARS, 1973). 2005. As part of the GRASr program, the tending the quality and quantity of For the vast majority of Flavoring Expert Panel regularly publishes key sci- food.

8 As a direct result of these advance- agents that have low reported annual entific data on structurally related groups ments, a variety of safety assessment volumes of use (Lucas et al., 1999; IOFI, of Flavoring substances on which gras procedures have developed and are cur- 1995), the PADI is a gross exaggeration decisions are based. FEMA gras assess- rently in place to assure regulators and of the average daily intake. The PADI. ments of alicyclic substances, furfural, consumers that food additives and in calculation assumes that all foods in a lactones, and trans-anethole have been particular Flavoring agents are safe for food category always contain that sub- published as part of the GRASr program. human consumption (JECFA, 1968, stance and that the food category is con- The fifth in the series, on pyrazine com- 1996, 1998, 1999, 2000; NAS, 1970, sumed daily (Oser and Hall, 1977).)

10 Quan- yl methylphenylglycidate. es (see pp. 38 and 40, and 45 50). The tifying intake of Flavoring substances is a These methods for calculating intake publication is a landmark in that it con- daunting task and challenged by many do not take into account loss of Flavoring tains the 2,000th substance (FEMA No. technical and economic difficulties. substance by processing, cooking, or 4000) to be recognized as gras by the More than 20,000 different food prod- waste. For example, the majority of allyl FEMA Expert Panel. It also contains the ucts are available for consumption in disulfide, a volatile disulfide, that is add- Expert Panel's determination that new the Western diet (FMI, 1998). These ed to garlic breads is lost during the bak- use levels and food categories for seven products are occasionally consumed by ing process. 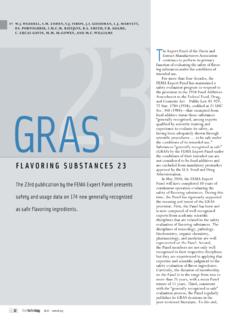 4 Advances in Dairy Ingredients of the biochemical properties of milk products before drying, water transfer during spray drying, the properties of powders, and inﬂ uencing factors is now essential for the produc- 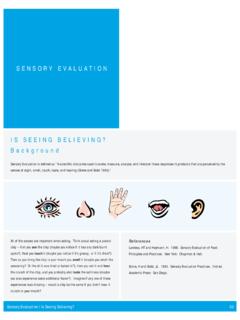 Sensory Evaluation | Is Seeing Believing? 55 IS SEEING BELIEVING? Background All of the senses are important when eating. Think about eating a potato 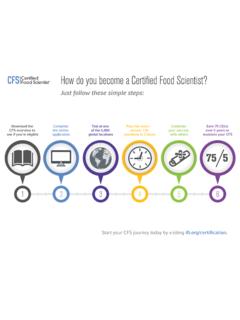 Infographic - How do you become a Certified Food …

Title: Infographic - How do you become a Certified Food Scientist? Author: Institute of Food Technologists (IFT). Subject: Outline of the simple steps needed to become a CFS 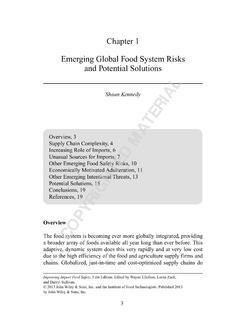 Chapter 1 Overview The food system is becoming ever more globally integrated, providing a broader array of foods available all year long than ever before. This adaptive, dynamic system does this very rapidly and at very low cost ... for food safety, it is perhaps more important for food defense as there

PURE™ ESSENTIAL OILS FAQ | 2 © 2015 Melaleuca, Inc. If you have been using some of these essential oils, designated as GRAS, for food flavoring, you may continue ... 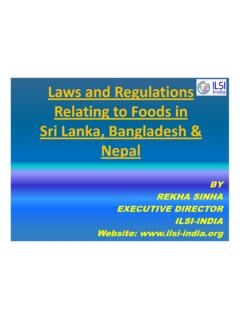 Presenatation On Laws And Regulation Relating to … 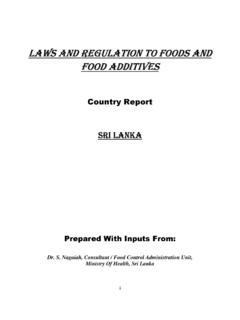 LAWS AND REGULATION TO FOODS AND FOOD …

Food, Regulations, Laws, Laws and regulation to foods and food 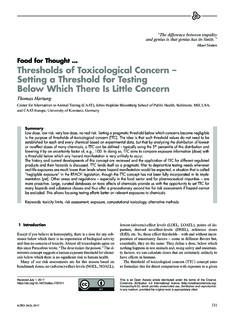 Food for Thought Thresholds of Toxicological …

HARTUNG ALTE 34(3), 2017 333 can be recommended as a useful screening tool either for prior - ity setting or for deciding whether exposure to a substance is so

GUIDELINES FOR THE PREPARATION OF HALAL …

HALAL Guidelines for manufacturers © 2004, AmalMerge (M) Sdn. Bhd. Page 1 of 12 GUIDELINES FOR THE PREPARATION OF HALAL FOOD AND GOODS FOR THE MUSLIM CONSUMERS ...

Guidelines, Preparation, Guidelines for the preparation of

Flavoring SubStanceS 23, Flavoring substances, ESSENTIAL OILS FREQUENTLY ASKED, Flavoring, Presenatation On Laws And Regulation Relating to, LAWS AND REGULATION TO FOODS AND FOOD, GUIDELINES FOR THE PREPARATION OF