2 SIX YEAR CAMPAIGN. Following a six year campaign led by Transport for London (TfL)[1] and the Barking Gospel Oak Rail User Group (BGORUG)[2], the electrification of the last un-electrified railway in North East London was announced by the Chancellor on 26th June 2013, when he added 90m to the 25m already pledged by TfL to carry out the work. The project was added to Network Rail's maintenance, renewals and enhancements package for implementation in Railway Control Period 5 (2014-2019)[3], a package with the biggest enhancements element in recent railway history, with major electrifications and modernisation across the country, causing some to query whether the Department for Transport (DfT) and the Rail Regulator (ORR). were right to commit Network Rail to deliver such a large workload within 5 years.

3 Following the Chancellor's 2013 announcement, very little happened, and it has taken until last month for the company to complete the GRIP 3 stage[4][5] of the scheme. This has led one expert rail commentator to doubt that the oft quoted mid 2017 completion date can be met[6]. CRISIS AT NETWORK RAIL. Fresh uncertainties arose however, following the announcement on 25th June by Transport Secretary Patrick McLoughlin that mounting delays and mushrooming costs to CP5 schemes were causing Government to pause the Midland Main Line and Trans Pennine major rail electrification schemes to concentrate resources on the almost 2-year late Great Western Main Line electrification that had started in CP4 (2009-2014). A number of reviews were announced to investigate how the shambles had occurred and one, led by Sir Peter Hendy CBE, brought in from TfL to take over as chair of the Network Rail board, was to examine all CP5 projects and decide what could be afforded and what would have to be deferred or axed[7].

4 Sir Peter was due to produce his report in the autumn. With the rail industry press reporting the CP5 enhancements programme in ruins with a funding gap of 4bn just two years after the enhancements budget was set by the ORR, things looked bleak. It had taken a six year struggle to eventually persuade the Treasury to fund what industry had long since regarded as a vital infill electrification project, having significant positive effects for freight[8] as well as passenger traffic. Could it, at this late stage end up cancelled or deferred for five or more years? Then there was the Barking Riverside Development, a scheme supported by the Mayor of London. A failure to be able to provide an electrified railway to the site by 2020 could put at risk over 10,000 new homes for which the planning consent required a rail link.

5 BGORUG realised it was vital to lobby both Network Rail and Government to allow the scheme to proceed. We just couldn't contemplate any delay or cancellation, said BGORUG Secretary Glenn Wallis, Commuters are shoehorned into our 2-car diesel TRAINS twice every working day. TfL have no more diesel TRAINS to put on the service. They had just ordered a batch of new 4-car ELECTRIC TRAINS of which eight are coming to Barking Gospel Oak, the two and a half year wait for those is way too long, we just could not wait any longer! . Page 2 of 9. BARKING GOSPEL OAK RAIL USER GROUP. T&H-BGORUG-PR-ELECTRIFICATIONCONTRACTPLA CED-13OC T2015 14/10/2015. GREEN LIGHT FOR ELEC TRIC TRAINS AT LAST! MPs & LONDON. ASSEMBLY. MEMBERS GIVE. FULL BACKING. Jeremy Corbyn MP Stella Creasy MP.

6 The Group sought help from local MPs Jeremy Corbyn (Islington North) and Stella Creasy (Walthamstow) who both submitted written Parliamentary Questions[4] to the Transport Secretary, Jeremy Corbyn writing additionally to Patrick McLoughlin and Sir Peter Hendy. Following a meeting at City Hall, local London Assembly Members Jennette Arnold (North East), Andrew Dismore (Barnet & Camden), Joanne McCartney (Enfield & Haringey) and John Biggs (City & East) wrote a joint letter to Sir Peter Hendy. We are so pleased with the support we have received from local MPs and Assembly Members , said Glenn Wallis. They appreciated how vital it was that this scheme went ahead Clockwise: Assembly Chair without any further delay and BGORUG cannot Jennette Arnold OBE, thank them enough for their help.

7 Andrew Dismore , Joanne McCartney & John Biggs CONTRACT PLACED. On 28th September Construction Enquirer magazine announced that Network Rail had awarded a contract to J. Murphy and Sons to electrify the Barking Gospel Oak Line[9]. The following day Rail Technology Magazine reported the contract award with some extra detail[10]. So far there has been no announcement from the DfT, Network Rail or TfL. Said Glenn Wallis, Both BGORUG and the mainstream railway press are puzzled about the lack of any announcement but can only assume that the Government wants to focus attention on non London infrastructure investment at the current time.. Passengers will continue to be crushed into the existing 2-car diesels during the week until next summer when work starts in earnest and line closures of many months will commence.

10 Roger Ford has reported informed sources as saying electrification of these connections is under threat of the axe. See note [8] for more information. This would be spoiling the ship for a ha'penny's worth of tar, said Glenn Wallis, This would mean many freight TRAINS that could be electrically hauled would continue with diesel locomotives, reducing the scope for air quality improvement along the line.. Page 4 of 9. BARKING GOSPEL OAK RAIL USER GROUP. T&H-BGORUG-PR-ELECTRIFICATIONCONTRACTPLA CED-13OC T2015 14/10/2015. GREEN LIGHT FOR ELEC TRIC TRAINS AT LAST! - ENDS - FOR FURTHER INFORMATION CONTACT. GLENN WALLIS ON (020) 8529 2361. OR E-MAIL NOTES FOR EDITORS. 1. Following the transfer of responsibility for the former Silverlink Metro services from the Department for Transport (DfT) in 2006, Transport for London (TfL), let the London Rail Concession to London Overground Rail Operations Ltd (LOROL), a joint Hong Kong/German owned venture, to operate the London Overground network from November 2007 until March 2014, subsequently extended to November 2016 by TfL. 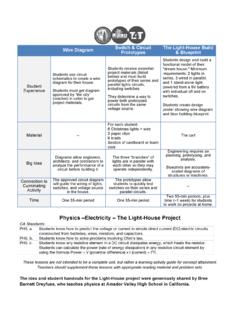 Special Research Topic Report on Current Practice in Utility Distribution Poles and Light Poles Adam Crosby Date 5/05/11 1.0 Objective The objective of this report is to present a summary of the current practice of the structural design of 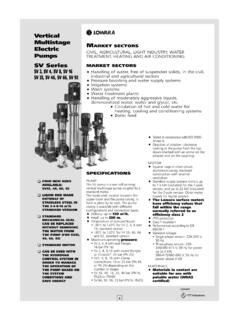 SPECIFICATIONS PUMP The SV pump is a non-self priming vertical multistage pump coupled to a standard motor. The liquid end, located between the … 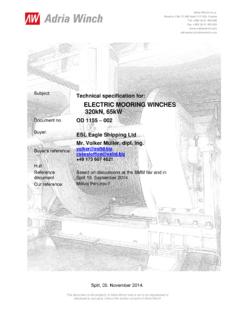