2 GST An Overview The Goods and Service Tax ( GST'), considered India's biggest and most historic tax reform is just around the corner. To err is to perceive GST as just any other Tax Reform . GST signifies Change that too a Game changer!! With the Government leaving no stone unturned to usher in GST on 01 July 2017, GST. roll-out is going to change market dynamics by creating an integrated marketplace. This new taxation regime would not only require organizations to capture appropriate data for computation and compliance, but also presents a unique opportunity for cost optimization and cash liberation.

3 The hitherto shadow economy in business would be forced to join the mainstream and time of fake bills could end. Unless tax is paid no one can avail credit and claim refund on exports. Downside of Current Tax structure Multiplicity of taxes - Multiple taxable events - Manufacture, Sales& Services Cascading effect- Restriction in credit availment Varied compliances under statutes Different Compliances under varied states Lack of automation in SME sector Cash economy thriving in a big way GST Regime Key Features One comprehensive levy on Goods & Services "ONE NATION ONE TAX".

4 Shift to "Destination based Taxation". Common - taxable event -"Supply Increase in credit base near seamless flow of eligible credits Improves business competencies with rewarding the honest and compliant. Dual GST Structure GST is levied by both the federal and state or provincial governments whereby a Central Goods and Services Tax (CGST) and a State Goods and Services Tax (SGST) will be levied on the taxable value of every transaction of supply of goods and services. For within the state (Intra-State) supplies both CGST and SGST shall be levied with CGST Portion payable to Central Government and SGST Portion payable to respective state.

5 For across the state (Inter-State) supplies IGST (CGST + SGST) shall be levied and collected by centre out of which the SGST Portion shall be transferred to respective consumer state 4 Tier Rate Structure A four tier rate GST tax Structure of 5%, 12%, 18% and 28% with lower rates for essential items and the highest for luxury and de-merits goods that would also attract an additional cess, have been decided by the GST Council 5% - Essential Goods 12% - Standard slab rate 18% - Standard Slab rate 28% - De-merit and Luxury goods Key Industry Features Source.

6 Textile Ministry, Make in India Textile Industry in India is one of key sector in Indian economy with a direct linkage to the overall growth of Indian and global economy. Textile plays a major role in the Indian economy India's textile market size (USD billion). It contributes 14 per cent to industrial production and 4 per cent to GDP. With over 45 million people, the industry is one of the largest source of employment generation in the country. The industry accounts for nearly 15 per cent of total exports. The Indian Textile industry is amongst very few industries that is vertically integrated from raw material to finished Products (From fibre to retail).

7 With potential growth opportunities in both the global and the domestic market it has leveraged its strong manufacturing position to achieve considerable expansion. The Textile and apparel industry can be broadly classified into two segments: i. Yarn & Fibre (Natural & Man-made). ii. Processed Fabrics, Ready-made garments & Apparels Further, it is pertinent to note that there are in total 55 SEZs pan India for Textiles and apparel industry. Raw Material Final garment/. Fibre apparel Processed Yarn fabric Fabric Current Tax Regime Indirect taxes on textile sector is obfuscated and indifferent across its various sectors.

8 Most of their products are either exempt or are taxed at a relatively lower rate and are extensively subsidized under different central and state regimes The textile industry is taxed both under the central and state regime. The following are the indirect taxes applicable to the textile industry Central Excise Duty: The Central Government levies excise duty under the Central Excise Act, 1944. The tax is charged on the manufacture of goods and are meant for domestic consumption. Special excise duty and Additional duty of excise are also charged under the said act.

9 The domestic textile industry has an optional route to pay zero excise duty across various stages of the value chain, provided they don't claim the Input Tax Credit (ITC) at any stage. Cotton based industry are exempt from payment of excise and Apparels have been attracting excise duty at effective rate of (@ 2% with abatement @ 40%). Tax payable at the time of removal. Value Added Tax (VAT): State VAT is a form of sales tax levied by the state governments on intra-state sale of goods. VAT is applied by the State governments at each stage of sale, with a particular apparatus of credit for the input VAT paid.

10 Currently in most of the states VAT on Apparels is @ 4~5%. Fabric manufacturing in India is largely carried out through the SSI sector, where many of the companies operate under the composite scheme of taxation (applicable with turnover of up to Rs crore). ITC cannot be claimed on purchases from suppliers under composite scheme. Tax payable at the time of sale. Central Sales Tax (CST): The Central sales Tax is a tax levied by the Union government but collected and retained by the state governments of the originating State on inter-state sale of goods. 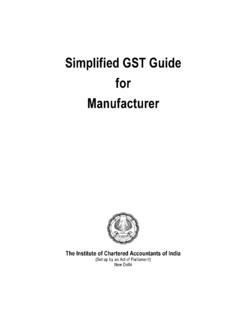 Simplified GST Guide for Manufacturer 2 The Concept of GST Law 9. The GST law is a simple ‘ACT’ replacing all Acts relating to levy of indirect taxes. 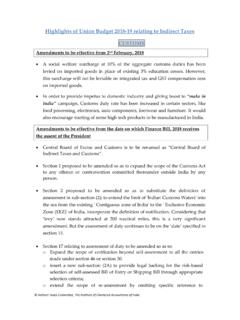 Highlights of Union Budget 2018-19 relating to Indirect Taxes CUSTOMS Amendments to be effective from 2nd February, 2018 A social welfare surcharge at 10% of the aggregate customs duties has been levied on imported goods in place of existing 3% education cesses. However, this surcharge will not be leviable on integrated tax and …

implement nationwide e-way bill system for Inter-State movement of goods on a compulsory basis with effect from 1st February, 2018. Further, the Uniform System of e-way

E-publication on E-way Bill under GST 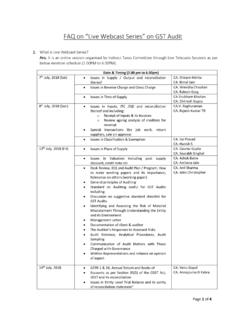 Impact of GST on Automobile Dealers Industry DISCLAIMER: The views expressed in this article are of the author(s). The Institute of Chartered Accountants of India

Notify the Tobacco Tax Unit if, during the license year ending June 30, 2019, there are changes to any information provided on this application.