Guide to 10 0 10 . 20 20 . 30 30 . Transducer Technology 40 40 . 50 50 . 60 60 . 70 70 . 80 80 . How a Transducer Works What is a Transducer ? How Does a Transducer Know A good fishfinder depends on an efficient Transducer to send and receive How Deep the Water is? signals. The Transducer is the heart of an echosounder system. It is the The echosounder measures the time between transmitting the sound and device that changes electrical pulses into sound waves or acoustic energy receiving its echo. Sound travels through the water at about 1,463 m/s and back again.

As the boat moves through the water, the echoes of some sound waves return more quickly than others. We know that all sound waves travel at the same speed. When a sound wave in one section of the sound ﬁ eld returns more quickly than another, it is because the wave has bounced off something closer to the transducer.

1 Guide to 10 0 10 . 20 20 . 30 30 . Transducer Technology 40 40 . 50 50 . 60 60 . 70 70 . 80 80 . How a Transducer Works What is a Transducer ? How Does a Transducer Know A good fishfinder depends on an efficient Transducer to send and receive How Deep the Water is? signals. The Transducer is the heart of an echosounder system. It is the The echosounder measures the time between transmitting the sound and device that changes electrical pulses into sound waves or acoustic energy receiving its echo. Sound travels through the water at about 1,463 m/s and back again.

2 In other words, it is the device that sends out the sound (4,800 ft/s), just less than a mile per second. To calculate the distance to the waves and then receives the echoes, so the echosounder can interpret or object, the echosounder multiplies the time elapsed between the sound detect what is below the surface of the water. transmission and the received echo by the speed of sound through water. The echosounder system interprets the result and displays the depth of the water for the user. Time (seconds). Echo Echo Echosounder B744V Transducer Transmit pulse Transmit pulse How Does a Transducer Work?

3 The easiest way to understand how a Transducer functions is to think of it as a speaker and a microphone built into one unit. A Transducer receives sequences of high-voltage electrical pulses called transmit pulses from How Does a Transducer Know the echosounder. Just like the stereo speakers at home, the Transducer What the Bottom Looks Like? then converts the transmit pulses into sound. The sound travels through As the boat moves through the water, the echoes of some sound waves the water as pressure waves. When a wave strikes an object like a weed, return more quickly than others.

4 We know that all sound waves travel at a rock, a fish, or the bottom, the wave is reflected. The wave is said to the same speed. When a sound wave in one section of the sound field echo just as your voice will echo off a canyon wall. When the reflected returns more quickly than another, it is because the wave has bounced off sound wave returns the Transducer acts as a microphone. It receives the something closer to the Transducer . These early returning sound waves reveal sound wave during the time between each transmit pulse and converts all the humps and bumps in the underwater surface.

5 Echosounders are able it back into electrical energy. A Transducer will spend about 1% of its time to detect whether a bottom is soft or hard and even distinguish between a transmitting and 99% of its time quietly listening for echoes. Remember, clump of weeds and a rock, because the sound waves will echo off of these however, that these periods of time are measured in microseconds, so the surfaces in a slightly different manner. time between pulses is very short. The echosounder can calculate the time difference between a transmit pulse and the return echo and then display Hard rocky bottom this information on the screen in a way that can be easily understood by the Soft user.

7 It that surrounds it. This difference in density causes the sound waves from is the part that converts electrical pulses into sound waves, and when the the echosounder to bounce off the fish distinctively. The Transducer receives echoes return, the piezoceramic element converts the sound waves back the echoes and the echosounder is able to recognize these differences. The into electrical energy. Piezoceramic elements are most often in a disk form, echosounder then displays it as a fish. but they may also be in the shape of a bar or a ring.

8 A Transducer may Air bladder contain one element or a series of elements linked together called an array. A Transducer is made up of six separate components: Piezoceramic element or an Sound absorbing array of elements material Housing Housing Cable Acoustic window Encapsulating material Encapsulating Sound absorbing material material Cable Acoustic window Piezoceramic element Selecting Frequencies Can Fish Hear the Sound Waves low-frequency waves are so large, they wash right over small obstacles. Produced by a Transducer ? Low-frequency sound waves are not as sensitive in detecting small fish or Sound waves are ultrasonic.

9 Most fish are unable to hear frequencies higher other small obstacles as are high-frequency waves, and although they can than about 500 Hz to 1 kHz. The ultrasonic sound waves sent out by AIRMAR see to greater depths, they will not send back detailed information or clear transducers have frequencies ranging from 10 kHz to 2 MHz (10,000 Hz crisp pictures. to 2,000,000 Hz), clearly beyond the hearing of fish. They are also above (ultra) the sound (sonic) that human ears are able to hear. Humans can hear sound waves from 10 Hz to 20 kHz.

10 However, most people can hear the transmit pulses of our 10 kHz transducers; they sound like a series of clicks. 10 MHz 1 MHz 100 kHz 10 kHz 200 kHz 1 kHz 50 kHz 10 Hz 0. Fish detection frequency range Human hearing frequency range AIRMAR Transducer frequency range What is Frequency? This illustration shows the differences in beamwidth of Frequency is the number of complete cycles or vibrations that occur within a Transducer operating at both 50 kHz and 200 kHz. a certain period of time, typically one second. Sound waves can vibrate at Notice the different way the fish appear as marks at each any one of a wide number of frequencies. 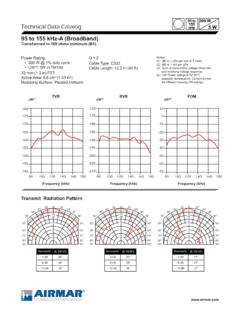 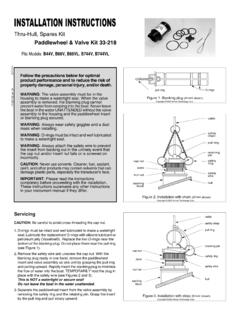 Invasive alien species (IAS): Concerns and status in the ...

Some of them are included in the list of 100 World’s Worst Alien Invasive Species (Lowe et al., 2000). Seven of the worst invasive plant ... Fishermen of the lake have reported a decline in their catch of indigenous fish species as the white goby (G. giurus) and the theraponid (Therapon plumbeus) as well as that of the introduced Nile tilapia ...

Some 2,100 business and residential properties were inundated and ... allowed reduced releases from the lake below minimum in-stream flow requirements. Local water rationing of up to 50% also was imposed. ... Salmon fishermen endured canceled and shortened seasons between 2008 and 2010. Tensions

Fishermen off the coast of Oregon and Washington have been dealing with significant limits on the salmon they can take home; the good news is that more albacore tuna are found in this region as warmer waters have promoted their movement northward. In the East, some people blame the warming water in Chesapeake Bay for causing

Some, Fishermen, Lake, Responding to Extreme Weather and Climate Events