Hamilton Health Sciences Board of Directors …

2 Paul Miller presented the physician credential process providing an overview of the new and re- appointments process for medical staff. Dr. Miller advised that a business case is being prepared relating to e-credentials and would be rolled out to all locations of HHS. 2. Opening Anna Ventresca was introduced and welcomed to her first Board meeting as a director and Bruce Barch joined the meeting by phone. Adrianna Bogris, a new member of the General Counsel's Office, who will assist in supporting the Board of Directors , was introduced and welcomed to her first Board meeting. Adrianna starts her new position on Tuesday, October 13, 2015. 3. Quorum The recording secretary advised that quorum was present Declarations of Conflict of Interest No conflicts of interest were declared Adoption of the Agenda It was moved by Julia Kamula and seconded by Scott Maki that the agenda be adopted as distributed.

4 Performance Committee Terms of Reference It was moved by Norm Col and seconded by Richard Koroscil that the items on the PMC. consent agenda be adopted as distributed. CARRIED. Decision Items Chantel Broten outlined the three items which the PMC is seeking Board approval. v) Strategic Plan Objectives Q1 Report The PMC recommended an amendment to the structure of the Strategic Plan. In consideration of the work that is being carried out regarding Our Healthy Future and that the future of the Urgent Care Centre (UCC) is a significant element of clinical services, it is recommended to include the UCC initiative as part of the Clinical Visioning initiative. Page 2. The following motion was moved by C. Broten and seconded by Terry Shields: THAT the Board of Directors receives for information the Strategic Objectives Update for Q1).

5 AND THAT the Board of Directors approves merging the initiative, Sustainable Business Model for the Urgent Care Centre, to be included as part of the Clinical Services Visioning initiative. CARRIED. vi) Our Healthy Future Stakeholder Engagement and Clinical Visioning Update C. Broten informed the Board that the PMC has received a comprehensive update from staff on the progress and learnings of Our Healthy Future and requested that the Board have a similar opportunity to hear the presentation. She called on Kelly Campbell to provide an introduction to the presentation, which was circulated in the Board package. K. Campbell introduced the leads of the Patient Centre Working Groups and provided a brief outline of the circulated materials.

6 Aaron Levo handed out the booklet, Community Conversations Progress Report, advising that it has been distributed to those individuals who participated in the public consultations, our participating partners and the general public. C. Broten moved the following resolution, which was seconded by Anna Ventresca, highlighting that the staff recommendation was amended to include a request that this initiative be included as a topic at the October 30, 2015 Board retreat. THAT the Performance Monitoring Committee receives for information an update on the stakeholder engagement and clinical visions for the Our Healthy Future initiative;. AND THAT staff be directed to provide a fulsome update to the Board of Directors at the October 1 Board meeting.

7 AND THAT Our Healthy Future be considered by the Board of Directors as a topic for the October 30, 2015 Board Retreat;. AND THAT staff be directed to provide a follow-up report at the November Performance Monitoring Committee meeting. The Board discussion centred on opportunities to identify HHS' strength and weaknesses and the ability to bench mark the findings to date. K. Campbell and the Working Group leads confirmed the iterative process included consideration of what is currently being done well, how technology might change, and what the gaps and solutions could be over the long term. K. Campbell indicated the Page 3. themes are consistent with national and international organizations. However, at this stage of reviewing the outcomes of recommendations, bench marking is not possible.

8 CARRIED. vii Supplementary Report: Our Healthy Future. It was moved by C. Broten and seconded by Julia Kamula that the following motion be approved: THAT the Board of Directors receives for information an update on stakeholder engagement and clinical visioning for the Our Healthy Future initiative;. AND THAT staff be directed to bring back a follow up report in February 2016. Moved by Norm Col and seconded by Julia Kamula that the Supplementary Report: Our Healthy Future be adopted as distributed. CARRIED. viii HITS Strategic Directions C. Broten reported that the committee had received an extensive report on staff's preliminary thinking on the strategic directions for technology services at HHS, including a common IT platform that could stretch across LHIN.

9 The PMC requested the Board 's support for staff to work with St. Joseph's Hospital in the development of a common technology platform between HHS and St. Joe's. The report outlined a first step toward establishing a governance process that will set the foundation for the strategic directions and responds to an urgent requirement on behalf of St. Joe's. The following motion was moved by C. Broten and seconded by Terry Shields: THAT the Board of Directors receives for information the Health Information Technology Services (HITS) Strategic Directions Presentation;. AND THAT HHS management staff be directed to seek to establish a common Health Information System (HIS) platform with St. Joseph's Healthcare Hamilton and the HNHB LHIN consistent with the strategic directions presented in Appendix A.

10 AND THAT staff be directed to develop a governance structure with St. Joseph's Healthcare Hamilton and the HNHB LHIN that would allow for effective and collaborative decision-making in the creation of a common HIS platform;. AND THAT staff be directed to engage with St. Joseph's Healthcare Hamilton , on a nonbinding basis to engage in a Request For Proposal or similar process, as appropriate to comply with the Broader Public Sector Accountability Act (BPSAA), to scope and assess the requirements to achieve a common HIS platform;. Page 4. AND THAT staff be directed to report back on proposed commitments, including a roadmap. The subsequent discussion included opportunities for revenue generation if HHS was to take a lead in developing the system. 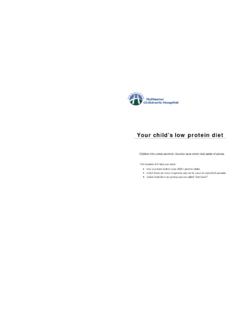 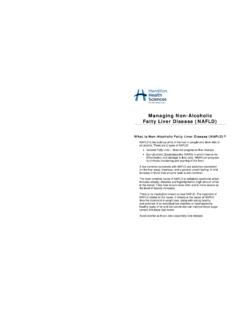 30 to 45 ml (2 to 3 tbsp) total amount of unsaturated fats and oils a day. Omega 3: canola oil and soybean oil or margarines made with these oils: 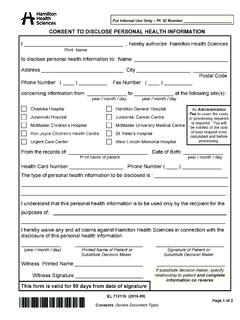 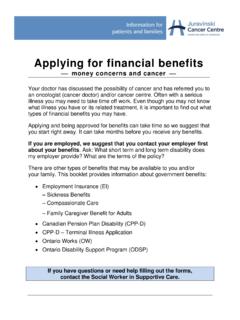 Applying for financial benefits ... Ontario Disability Support Program (ODSP) A provincial program through Ministry of Community and Social Services. Requirement Is asset-tested for those with a disability and financial need. Must verify limited assets and household income from all sources. 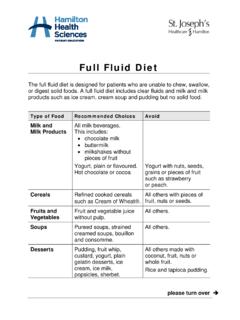 please turn over Full Fluid Diet The full fluid diet is designed for patients who are unable to chew, swallow, or digest solid foods. A full fluid diet includes clear fluids and milk and milk 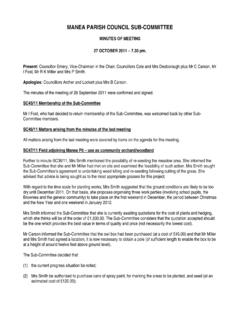 performance indicators, consumer feedback, and the overall plan for continuous improvement of performance. The improvement process design must address key questions concerning the 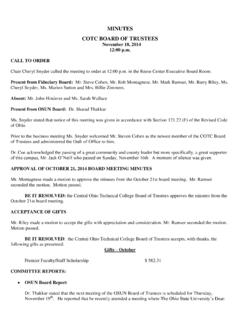 MINUTES COTC BOARD OF TRUSTEES November …

MINUTES COTC BOARD OF TRUSTEES November 18, 2014 12:00 p.m. CALL TO ORDER Chair Cheryl Snyder called the meeting to order at 12:00 p.m. in the Reese Center Executive Board Room.

In regards to the discussion of meeting topics of …

• In regards to the discussion of meeting topics of interest, we revisited the proposals / requests discussed back in December. With the overview of the ASQ certifications covered in this ASQ

Topics, Meeting, Discussion, The discussion of meeting topics of