HAUDENOSAUNEE GUIDE FOR EDUCATORS . EDUCATION OFFICE. We gather our minds to greet and thank the enlightened Teachers who have come to help throughout the ages. When we forget how to live in harmony, they remind us of the way we were instructed to live as people. With one mind, we send greetings and thanks to these caring Teachers. Now our minds are one. From the HAUDENOSAUNEE Thanksgiving Address Dear Educator, T. he Smithsonian 's National Museum of the American Indian is pleased to bring this GUIDE to you. It was written to help provide teachers with a better understanding of the HAUDENOSAUNEE .

you instruct your Haudenosaunee unit. It was our hope to provide educators with a deeper and more integrated understanding of Haudenosaunee life, past and present. This guide is intended to be used as a supplement to your mandated curriculum. There are several main themes that are reinforced throughout the guide.

1 HAUDENOSAUNEE GUIDE FOR EDUCATORS . EDUCATION OFFICE. We gather our minds to greet and thank the enlightened Teachers who have come to help throughout the ages. When we forget how to live in harmony, they remind us of the way we were instructed to live as people. With one mind, we send greetings and thanks to these caring Teachers. Now our minds are one. From the HAUDENOSAUNEE Thanksgiving Address Dear Educator, T. he Smithsonian 's National Museum of the American Indian is pleased to bring this GUIDE to you. It was written to help provide teachers with a better understanding of the HAUDENOSAUNEE .

2 It was written by staff at the Museum in consultation with HAUDENOSAUNEE scholars and community members. Though much of the material contained within this GUIDE may be familiar to you, some of it will be new. In fact, some of the information may challenge the curriculum you use when you instruct your HAUDENOSAUNEE unit. It was our hope to provide EDUCATORS with a deeper and more integrated understanding of HAUDENOSAUNEE life, past and present. This GUIDE is intended to be used as a supplement to your mandated curriculum. There are several main themes that are reinforced throughout the GUIDE .

3 We hope these may GUIDE you in creating lessons and activities for your classrooms. The main themes are: Jake Swamp (Tekaroniankeken), a traditional Mohawk spiritual The HAUDENOSAUNEE , like thousands of Native American nations and communities leader, and his wife Judy across the continent, have their own history and culture. (Kanerataronkwas) in their The Peacemaker Story, which explains how the Confederacy came into being, is home with their grandsons the civic and social code of ethics that guides the way in which HAUDENOSAUNEE Ariwiio, Aniataratison, and people live how they are to treat each other within their communities, how Kaienkwironkie.

4 Jake and Judy they engage with people outside of their communities, and how they run their feel that it is very important traditional government. for grandparents to ensure the HAUDENOSAUNEE people give thanks everyday, not just once a year. The Thanksgiving future of their people by instilling Address, or Gano:nyok, serves as a daily reminder to appreciate and acknowledge their beliefs and traditions in all things. The Gano:nyok reinforces the connection that people have to the world their grandchildren. around them. Portions of this address are introduced in this GUIDE .

5 NMAI photo by Katherine Fodgen, HAUDENOSAUNEE culture, like all cultures, is dynamic and has changed over time. P26530. Together, these four themes are reminders that the HAUDENOSAUNEE worldview is guided by speci c principles that have endured through the generations. Finally, though each of the Six Nations speaks a distinct language, there are many words that are the same in all languages. We have included several HAUDENOSAUNEE words throughout this GUIDE . We have also provided pronunciations. Please note that all pronunciations are in Seneca, though the words sound similar in the Mohawk, Cayuga, Tuscarora, Oneida, and Onondaga languages.

6 WHO ARE THE. HAUDENOSAUNEE ? IROQUOIAN. H. audenosaunee (hoe-dee-no-SHOW-nee) means people who build a LANGUAGES. house. The name refers to a CONFEDERATION or ALLIANCE among six Native American nations who are more commonly known as the Iroquois The six nations Confederacy. Each nation has its own identity. These nations are known as: that comprise the HAUDENOSAUNEE speak MOHAWK (MO-hawk) or Kanien'kehaka, which means People of the Flint. Iroquoian languages. The Mohawk are also called Keepers of the Eastern Door since they are the The Iroquoian language group comprises over easternmost nation in HAUDENOSAUNEE territory.

7 They were responsible for ten languages including protecting and defending the eastern boundaries of HAUDENOSAUNEE territory. Cayuga, Mohawk, Oneida, ONEIDA (o-NY-da) or Onayotekaono, which means People of the Onondaga, Tuscarora Standing Stone. and Seneca. Cherokee ONONDAGA (on-nen-DA-ga) or Onundagaono, which means People of the Hills. is also an Iroquoian The Onondaga are also called Keepers of the Central Fire since the Onondaga language, though the Nation is considered the capital of the Confederacy. As the Peacemaker promised, Cherokee are not part the HAUDENOSAUNEE council re burns at the Onondaga Nation.

8 Of the HAUDENOSAUNEE CAYUGA (ka-YOO-ga ) or Guyohkohnyoh, which means People of the Confederacy. There Great Swamp. are over 20 indigenous SENECA (SEN-i-ka), or Onondowahgah, which means People of the Great Hill. language families and over two hundred indigenous The Seneca are also known as Keepers of the Western Door because they are languages spoken in the the westernmost nation in HAUDENOSAUNEE territory. They were responsible for United States. Iroquoian protecting and defending the western boundaries of HAUDENOSAUNEE territory.

9 Languages are spoken by TUSCARORA (tus-ka-ROR-a) or Skaruhreh, which means The Shirt Wearing Native nations whose People. In 1722, members of the Tuscarora Nation, who were living in what is now original homelands were North Carolina, traveled north to seek refuge among the HAUDENOSAUNEE . They located in the eastern were invited to join the HAUDENOSAUNEE Confederacy, becoming its sixth nation. United States, primarily Since that time, the Confederacy has also been known as the Six Nations. New York State and the Great Lakes region, as well HAUDENOSAUNEE people refer to themselves as Ongweh'onweh (ongk-way-HON-way), as Southern Appalachia, which simply means real human being.

10 Although many cultural similarities and which includes North family connections unite the six nations, each one is also unique and has its own and South Carolina distinct language. and Georgia. -1- PEACEMAKER STORY. One of the most important events that shaped the HAUDENOSAUNEE was the creation of the Gayanesshagowa (gaya-ness-HA-gowa), the Great Law of Peace. It guides the HAUDENOSAUNEE through all aspects of life. A full rendition of this epic, which takes several days to tell, reveals the ways in which the Peacemaker's teachings emphasized the power of Reason, not force, to assure the three principles of the Great Law: Righteousness, Justice, and Health. 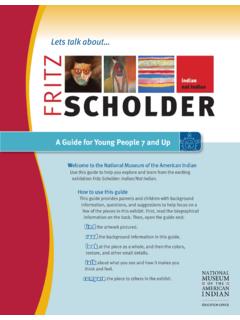 Fritz Scholder, A Guide for Young People 7 and Up

AGuide for Young People 7 and Up How to use this guide This guide provides parents and children with background information, questions, and suggestions to help focus on a few of the pieces in this exhibit. First, read the biographical information on the back. Then, open the guide and: 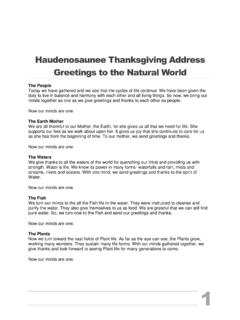 2 Haudenosaunee Thanksgiving Address Greetings to the Natural World The Food Plants With one mind, we turn to honor and thank all the Food Plants we harvest from the garden. 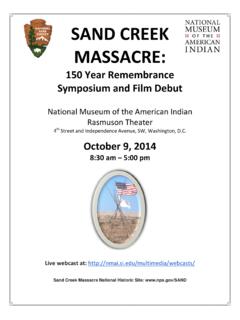 The effects of the massacre endure today through immense multigenerational impacts on tribal traditions, society, identity, and livelihood. Panelists will share perspectives on these impacts based on personal experiences or knowledge of Sand Creek Massacre descendants.

world history. The museum’s collaborations with Native communities, teachers, scholars, and educational leaders are essential to the development of new resources for the classroom. Native Knowledge 360° is a platform for NMAI and Native Peoples …

Did You Know? Facts About American Indian Removal

President Andrew Jackson signed the measure into law on May 28, 1830. 2 3. The legendary frontiersman and Tennessee congressman Davy Crockett opposed the Indian Removal Act, declaring that his decision would “not make me ashamed in the Day of Judgment.” 3. 4. In 1829, the Christian missionary Jeremiah Evarts published a series of newspaper ...

to American Indian cultures. As with all lessons that discuss Native American culture and history, it is important to include accurate details, be tribally specific, and practice cultural sensitivity when teaching about Thanksgiving. Just as they were before the English arrived, Native Americans like the Wampanoag Peoples are dynamic and active 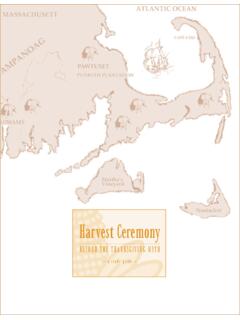 the English. Though decimated by European diseases and defeated in war, the Wampanoag continued to survive through further colonization in the eighteenth, nineteenth, and twentieth centuries. The Wampanoag Today . Today the three primary communities of Wampanoag people in Massachusetts are Mashpee on Cape Cod, Aquinnah (Gay Head) on Martha’s

special ceremony every two years called the White Deer Skin Dance that renews the natural world and brings everything into balance. “Our White Deer Skin Dance brings harmony back to us. We dance so that the deer and fish will always be there.” —Mervin George, Sr. (Hupa), 2003 Giving daily thanks for nature’s gifts has always been an

in tribal, national, and international museums, these quilters are making an impact in their com­ munities and the world. On a personal level, their individual stories reinforced my own childhood memories. When Ollie Napesni (Lakota), reminisced about her mother’s old army quilts, I could

Perspective: The Other Slavery

slavery as a phenomenon of the early colonial period, a set of practices that fell into disuse once Africans were brought to the Americas in sufficient numbers. In reality, Native slavery in its many guises coexisted with African slavery all along and proved nearly impossible to eradicate. Bonampak mural, Room 2, Chiapas, Mexico, 791 CE.