All reasonable precautions have been taken by the World Health Organization to verify the information contained in this document. However, the published material is being distributed without warranty of any

5 Health care -associated infections only usually receive public attention when there are epidemics. Although often hidden from public attention, the very real endemic, on- going problem is one that no institution or country can claim to have solved, despite many efforts. Health care -associated infections in high-income countries All reasonable precautions have been taken by the world Health organization to verify the information contained in this document. However, the published material is being distributed without warranty of any kind, either expressed or implied.

6 The responsibility for the interpretation and use of the material lies with the reader. In no event shall the world Health organization be liable for damages arising from its use. WHO acknowledges the H pitaux Universitaires de Gen ve (HUG), in particular the members of the Infection Control Programme, for their active participation in developing this material. At any given time, the prevalence of Health care -associated infection in developed countries varies between and 12%. The European Centre for Disease Prevention and Control reports an average prevalence of in European countries.

7 The Centre estimates that 4 131 000. patients are affected by approximately 4 544 100 episodes of Health care -associated infection every year in Europe. The estimated incidence rate in the United States of America (USA) was in 2002, corresponding to infections per 1 000 patient-days and million affected patients. According to a recent European multicentre study, the proportion of infected patients in intensive care units can be as high as 51%; most of these are Health care - associated. Approximately 30% of patients in ICUs are affected by at least one episode of Health care -associated infection.

8 The longer patients stay in an ICU, the more at risk they become of acquiring an infection. On average, the cumulative incidence of infection in adult high-risk patients is episodes per 1000 patient- days. High frequency of infection is associated with the use of invasive devices, in particular central lines, urinary catheters, and ventilators. Health care -associated infections in low- and middle-income countries Limited data, often of low quality, are available from low- and middle-income countries. However, recent analysis by WHO found that Health care -associated infections are more frequent in resource-limited settings than in developed countries.

9 At any given time, the prevalence of Health care -associated infection varies between and in low- and middle-income countries. Average prevalence is significantly higher in high- than in low-quality studies ( vs , respectively). The proportion of patients with ICU-acquired infection ranged from to with a frequency of overall infections as high as episodes per 1000 patient- days. This is almost three times higher than in high-income countries. Furthermore, in some developing countries, the frequency of infections associated with the use of central lines and ventilators and other invasive devices can be up to 19 times higher than those reported from Germany and the USA.

10 Newborns are also at higher risk, with infection rates in developing countries 3-20. times higher than in high-income countries. Among hospital-born babies in developing countries, Health care -associated infections are responsible for 4% to 56% of all causes of death in the neonatal period, and 75% in South-East Asia and Sub-Saharan Africa. Surgical site infection is the leading infection in the general patient population in countries with limited resources, affecting up to two third of operated patients and with a frequency up to nine times higher than in developed countries. the diabetes epidemic and its impact on Europe - …

3 *the document predominantly focuses on type 2 diabetes, unless otherwise stated. EXECUtiVE SUMMarY Most healthcare systems today are organised to treat the acute symptoms of disease and manage conditions 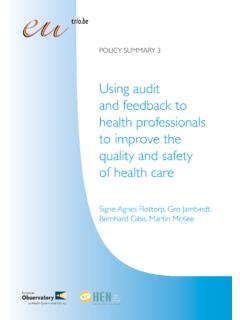 Using audit and feedback to health professionals to ... 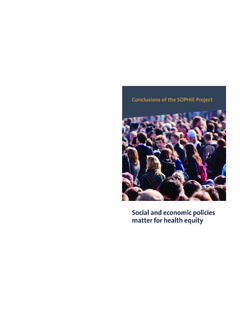