Mental Health NHS Health Scotland is a national Health Board working with and through public, private and third sector organisations to reduce Health inequalities and improve Health . We are committed to working with others and provide a range of services to support our stakeholders take the action required to reduce Health inequalities and improve Health . Key messages P oor Mental Health is a significant public Health challenge. Promoting good Mental wellbeing as part of prevention and early intervention will support complementary treatment and recovery from Mental Health problems.

2 neality iein 10 What is this briefing about? This is the 10th in a series of inequality briefings. It outlines two specific strands relating to social inequalities and mental health: (1) mental health inequalities as an (often neglected)

1 Mental Health NHS Health Scotland is a national Health Board working with and through public, private and third sector organisations to reduce Health inequalities and improve Health . We are committed to working with others and provide a range of services to support our stakeholders take the action required to reduce Health inequalities and improve Health . Key messages P oor Mental Health is a significant public Health challenge. Promoting good Mental wellbeing as part of prevention and early intervention will support complementary treatment and recovery from Mental Health problems.

2 M. ental Health problems are strongly linked to Health and social inequalities . A. person's position in society plays an important part in their Mental Health , with less advantaged people having greater experience of poor Mental Health . Key actions Integrate Mental Health into all policies at a national and local level. U. se approaches that avoid relying on opting in, maximise income and provide for those with the greatest need within universal services. These actions are likely to be the most effective in reducing Mental Health inequalities .

5 Fewer years spent in good Health ' and 22 years for women. Please see the first briefing2 in this series for more information on Health inequalities and the broad range of actions that can be taken to reduce them. Why is Mental Health and wellbeing important? At any given time, approximately one in six adults in Scotland experience a common Mental Health Mental Health problems are one of the major contributors to disability in the UK4,5,6 and are a major risk factor for suicidal behaviour.*,7. Recent data suggest that the economic costs of Mental Health to Scotland are substantial.

6 In 2009/10 this was approximately a 25% increase from 2004/5 ( billion). It is estimated that almost 2 billion was spent on Health and social care for those with Mental Health However, in the latest Adult Psychiatric Morbidity Survey, only about one in three adults (37%) with common Mental Health problems in England were accessing treatment at the time of the * Suicidal behaviour includes both suicide and non-fatal self-harm.. The term common Mental Health problems is used to refer to depression and anxiety disorders. 2 Inequality briefing 10.

9 11%)10. What drives inequalities in Mental Health ? The primary causes of Health inequalities are rooted in the political and social decisions and priorities that result in an unequal distribution of income, power and wealth. This can lead to poverty and marginalisation of individuals and groups. These fundamental causes also influence the distribution of wider environmental influences on Health , such as the availability of good-quality housing, green space, work, education and learning opportunities. They can also influence access to services and social and cultural opportunities in an area and in society.

10 The wider environment in which people live and work then shapes their individual experiences of low income, poor housing, discrimination and access to Health services, for example. This all results in the unequal and unfair distribution of Health , ill Health (morbidity) and death (mortality).2.. T his includes those who are unemployed, defined as not currently having a job but actively seeking employment; and those who are economically inactive, defined as not having a job and not actively seeking employment or being available for @NHS_HS 3. 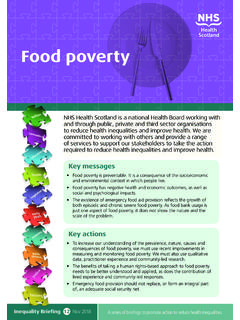 @NHS_HS www.healthscotland.scot 5 What is the nature and scale of food poverty/food insecurity in Scotland? Effective monitoring and evaluation are needed to not only better understand the extent

3 . People with Learning Disabilities in Scotland: 2017 Health Needs Assessment Report . This report, commissioned by NHS Health Scotland, is an update of the 2004

With, People, Learning, Disabilities, People with learning disabilities in 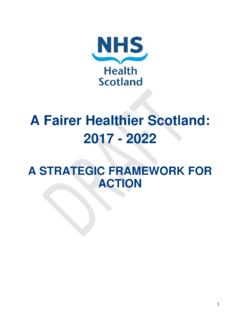 5 Adopting these principles empowers people to exercise their responsibilities for protecting and improving their own health and wellbeing, whilst … 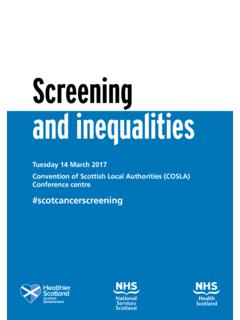 2 Foreword Dear colleagues, I am delighted to be chairing this event that NHS Health Scotland and partners have arranged to discuss interventions that have potential to reduce

The Scottish Attainment Challenge aims to achieve equity in educational outcomes, with a particular focus on closing the poverty-related attainment gap.

Social isolation and loneliness in Scotland: a review of ...

Social isolation and loneliness are not necessarily linked, as people who are socially connected can feel lonely and socially isolated people may not feel lonely.

Tackling the attainment gap bypreventing and … 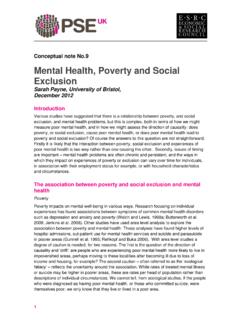 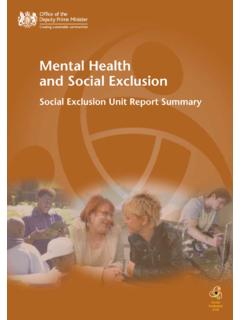 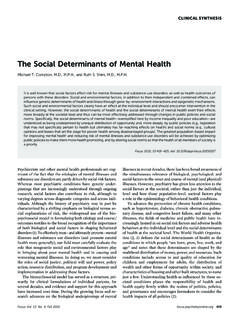 The Social Determinants of Mental Health

The Social Determinants of Mental Health Michael T. Compton, M.D., M.P.H., and Ruth S. Shim, M.D., M.P.H. It is well known that social factors affect risk for mental illnesses and substance use disorders, as well as health outcomes of

RISKS TO MENTAL HEALTH: AN OVERVIEW OF …

Risks to mental health Page 4 Social and economic circumstances: The capacity for an individual to develop and flourish is deeply influenced by their immediate social surroundings – including their opportunity to engage positively with family members, friends or …

This document is a short summary of the findings published ...

Mental health, resilience and inequalities Across the 53 Member States of the WHO European Region, tackling inequalities is the major challenge.