Henry FordLife and Logging Henry FordLife and Logging by Brian ClevenJanuary/February 199919d s Tasty Little Town inPEQUAMINGd s Tasty Little Town inPEQUAMINGS hortly after World War I, the nation s demand forlogs and lumber far exceeded the supply. By thistime, the ford Motor Company was producingover one million cars a year. Besides the 250board feet of lumber used for each automobile, wood wasneeded for shipping containers, railroad ties, boxcars, storagebins, wood paving blocks, boxing, pallets and pattern translated to more than 200 million feet of lumber annu-ally. Believing that lumber dealers took advantage of his com-pany s need for high quality hardwood by price gouging, Henry ford acquired his own lumber sources, which led himto Baraga County where he acquired the milling communityof pequaming and founded Alberta. ford started his quest for lumber by sending EdwardKingsford in search of large tracts of forest in the UpperPeninsula.

1 Henry FordLife and Logging Henry FordLife and Logging by Brian ClevenJanuary/February 199919d s Tasty Little Town inPEQUAMINGd s Tasty Little Town inPEQUAMINGS hortly after World War I, the nation s demand forlogs and lumber far exceeded the supply. By thistime, the ford Motor Company was producingover one million cars a year. Besides the 250board feet of lumber used for each automobile, wood wasneeded for shipping containers, railroad ties, boxcars, storagebins, wood paving blocks, boxing, pallets and pattern translated to more than 200 million feet of lumber annu-ally. Believing that lumber dealers took advantage of his com-pany s need for high quality hardwood by price gouging, Henry ford acquired his own lumber sources, which led himto Baraga County where he acquired the milling communityof pequaming and founded Alberta. ford started his quest for lumber by sending EdwardKingsford in search of large tracts of forest in the UpperPeninsula.

2 Kingsford first suggested the company purchase a140,000-acre tract, but ford rejected this as insufficient. In1920 the company purchased 313,000 acres from the Michi-gan Iron and Land Company for $ million. ford then builthis principal forest products plant south of Iron Mountain, pri-marily because of the town s ready labor first land purchase, consisting of railroad grants, hadbeen divided into a checkerboard of alternate, odd-numberedsections. For the sake of efficiency, Henry ford wanted a solidblock of ownership. Therefore, negotiations continued with thelumber companies who owned the alternate sections. Stems &Culver Lumber Company sold its holdings in the L Anse areato ford on January 1, 1923; Charles Hebard & Sons LumberCompany of pequaming sold its holdings in was the first large-scale lumbering and millingoperation in the Lake Superior region boasting over a twen-ty-year period an annual production average of thirty millionfeet of lumber.

3 Charles Hebard, an immigrant English-manand a successful timber speculator in the East, founded thesawmill and community in 1878. He located it on thePequaming Peninsula, nine miles north of L Anse, on the east-ern shore of Keweenaw Bay. He acquired the site specificallyfor its deep, protected harbor and its access to a population of 174 people in 1880, pequaming grewquickly, peaking at 800 people in 1897. To compete for laborwith the established mines in the region, Hebard provided anattractive town with services. He laid out his village along thecontours of the land, featuring amenities such as parks, bathhouses, a post office, churches, schools, a hotel, an IOOF Halland a clubhouse. His efforts attracted a stable workforce thatincluded third-generation Americans and Canadians, alongwith Norwegians, Brits and Finns. An 1883 observer reportedthat Hebard had developed a magnificent business.

4 By goodtaste and proper regard for comfort and pleasure, they havebuilt up a tasty Little town. The second-growth timber hasbeen spared, and all the natural advantages made available tobeautify and improve their grounds, till they have succeededin producing a hamlet about their mills that rivals the attrac-tions of many of the watering places of the West. Hebard scompany eventually built and rented about one hundredhomes for its with most company towns, Hebard s company built andowned all of the buildings, including the commercial businessplaces. His sawmill was basic in appearance; a two-storystructure built close to the lake. Machinery to drive the sawswas located on the first floor. Cutting took place on the sec-ond floor, using the leading technology of the time. A bullchain pulled logs up from the mill pond and fed them into twocircular saws that cut a slab off each side.

5 The resulting block,called a cant, went to the gang saws, which consisted of alarge number of short, upright saws set about an inch apartmoving rapidly up and down in a heavy frame. In one opera-tion a large number of boards were cut from the mill had the reputation for turning out the finest lum-ber cut from Michigan pineries. For this reason, its mainproducts, 25 million board feet of white pine and 7 millionlath boards cut annually, commanded a higher market addition, a shingle mill cut 7 to 25 million shingles annu-ally. The company also cut rail ties and sold hemlock bark totanneries. This full range of wood products allowed Hebard tomeet the demands and ride out the fluctuations of the com-mercial 1923 the ford Motor Company held secret negotia-tions with Daniel and Charles Hebard, who had inherited thecompany when their father passed away in 1904.

6 The broth-ers hoped to sell the company before starting the sawmill forthe 1923 season. This would ease the transition and allowFord to avoid many of the complications that arose in takingover the L Anse operation. Initially, ford wanted to purchaseonly the lumber company s 40,000 acres of timberland, butthe Hebards careful to insure pequaming s future insistedFord also buy the town of six hundredresidents and the September 8, 1923, Fordannounced the purchase of the oldestlumber company in the Lake Superiorregion for $2,850,000. The dealincluded the double band sawmill, thelath and shingle mills, 40,000 acres ofland, thirty million feet of manufac-tured lumber sitting on pequaming s docks, three million feetof logs ready to be cut into lumber, the town of pequaming ,its railroad, and towing and water equipment. With the pur-chase, ford s lands in L Anse Township totaled 175,000acres, which left the ford Motor Company paying about 75percent of the township s property ford expected a diligent work force and when theFord Motor Company acquired pequaming there was animmediate change in the regimen of the workers lives.

7 ford smanager in L Anse declared, Your vacation is over, boys. The sawmill was closed for a general overhaul and all thestructures were repaired and painted. Every worker receivednew medical examinations for which they were charged fivedollars, shift work and time clocks were introduced and chil-dren were no longer allowed to work in the now received five dollars for an eight-hour dayinstead of the previous $ for a longer day. After sixtydays, a worker received a raise to six company worked on all the houses, reroofing most,making repairs where needed and repainting the interiors amuch-needed task. ford raised the rent from one dollar a yearto $12 to $16 a month depending on the size of the did not seem to mind since their salaries easily cov-ered the ford reserved Daniel Hebard s lodge for his per-sonal use. The white, two-story lodge, named the Bungalow,offered eight bedrooms, a large living room, a dining room, adownstairs office, a fireplace and seven bathrooms.

8 With itsseven columns, it was reminiscent of a colonial mansion,complete with a caretaker s residence, a formal garden and atennis History MagazineWhen Henry ford acquired pequaming hegave the small community a completefacelift. ford ordered that all houses bepainted and that the fences separatinghouses and lining the streets be Archives of MichiganThe sawmill reopened on September 24, while repair workcontinued on the plant. A week later, a night shift was mill s production saw an increase for two reasons: therefurbishment of the equipment meant it was less prone tobreakdown and the sawyers no longer cut for grade. Instead ofturning a log to get the greatest amount of top grade lumber,it was cut for the most board feet. Consequently, it took lesstime to cut each log and made the work the beginning of October, the ford Motor Companypursued Daniel Hebard s suggestion to connect the ford andHebard railroads.

9 By the end of February the first trains ranbetween L Anse and pequaming allowing each plant to spe-cialize in hardwood and hemlock, respectively. This simpli-fied processing the wood in the yards, saving time and April 1924 Henry ford traveled north to inspect his newacquisitions at L Anse and pequaming . He complimentedGeneral Manager Herman Hartt on the cleanliness and effi-ciency of the two plants under his management. Plant man-agers went to extremes to have a plant properly cleanedbefore his arrival. The mill might shut down while it wascleaned and painted. Workers even painted in the rain if themanager miscalculated the time needed to prepare. Work wasnot limited to the mill. Crews also painted any home thatneeded it and spruced up the s townspeople respected Henry and ClaraFord, who often spent two or three days at a time in he arrived, he walked the streets talking to the peoplethat he met, sitting on the porch of the general store greetingpeople as they passed by and stopping in the schools to chatwith the children.

10 Nearly every time ford came to town, hethrew a party at the Bungalow for the children. Entertainmentrevolved around the old-time dances he enjoyed so , who loved machines, developed a special interest inPequaming s sawmill with its lightweight carriage thatallowed it to run fast. ford appreciated the old style of themill s setup, such as its use of line shafts, pulleys and leatherbelts. He was also a practical man who relished the mill sefficiency. When ford walked into the sawmill, he talked tothe men about their work and machines. He loved to listen tothe mill in operation, especially the steam engines. If one didnot sound right, he sent it to Detroit for repair. If somethingwas wrong with the valves, he grabbed a wrench, and workedon them until they were fixed. Regardless of how he wasdressed, ford crawled under a machine to locate the manu-facturer s two weeks of ford s 1924 visit, pequaming becamea fenceless town.

Unit 7. Introduction to Dealership Accounting 1 In Units 1-6, we have discussed basic accounting using generic company information. In this Unit, we begin our review of Ford and Lincoln Mercury accounting. 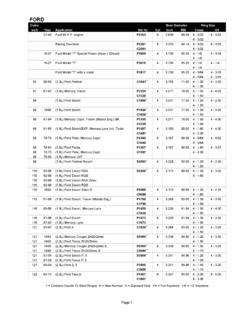 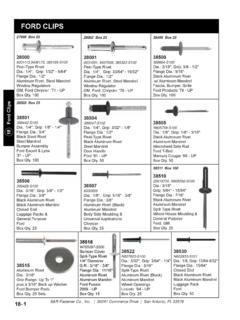 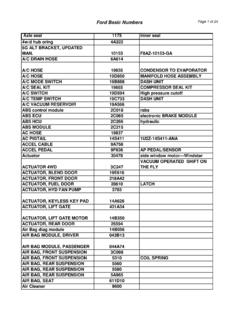