2 Using 10ns pulses at a duty cycle and 60mW of peak Power , a target one meter away exhibiting Lambertian reflectance was detected with a 3:1. minimum signal-to-noise ratio in a narrow-field LIDAR setup using a 28dB amplifier. At , using the same target and no signal amplification, a 2:1. minimum signal to noise ratio was achieved in a wide-field setup. These results establish the viability of commercially available low Power VCSEL devices for LIDAR . Many current applications of LIDAR involve efficiency6. However, using pulses with pulse simple Range -finding for imaging1; however, widths closer to the thermal time (around ten Short - Range LIDAR systems for countermeasure nanoseconds) can significantly reduce this effect deployment are not well developed.

3 A system by reducing the accumulation of heat at the device used for detection of fast-moving projectiles, such junction level. Furthermore, a lower duty cycle as those from improvised explosive devices can account for dissipation of any accrued thermal (IEDs) and explosive formed penetrators (EFPs) energy4. In doing so, it is possible to put much must be able to detect and track targets at Short more energy into the device than the design would ranges (about one meter) and successfully deploy otherwise allow under CW conditions. By countermeasures. By optimizing the electrical reducing pulse width and duty cycle, the peak circuitry, the output Power of a VCSEL can be output Power can be increased (see Fig.)

4 1). enhanced2,3, for use in wide-field LIDAR , which Alongside these higher output powers, a larger, relies on the divergence of light from a point focused beam spot was implemented in the source to detect over a wide area. The wide-field LIDAR test to determine the basic parameters method is preferred over concentrating the light required to later optimize a VCSEL for wide-field with optics for the narrow-field because the latter detection. method is incapable of detecting any projectiles whose paths do not cross through the beam; thus, a narrow-field LIDAR system is fundamentally flawed for projectile detection.

5 Furthermore, commercially available VCSELs are not typically suitable for Short - Range detection, as many are low Power output devices that are designed for use in fiber optics or other applications with low losses, whereas LIDAR is a high loss application1. Since the number of photons that a laser device is able to emit in a Short amount of time is limited4,5, and because only a low percentage of photons that are emitted reflect back to the detector, enhancing the capability of a LIDAR system involves increasing the maximum output of the laser and/or the Figure 1. LI chart of OPV310 peak output Power vs peak detector sensitivity and responsiveness.

6 Input current. VCSELs heat up through extended operation if stressed beyond their design capabilities, Parasitics within the electrical circuit network eventually resulting in lowered conversion amounted to increased electrical impedance, 1. 7 May 2013 Journal of Undergraduate Research in Physics MS12017 EXR. which distorted the input signals5. Additional ensures isotropic scattering from incident light on impedance was introduced by a number of factors the block. The results obtained using the including the packaging of the VCSELs , the Lambertian target were similar to those from a coaxial connections between devices, and the fact block of aluminum and from a block of copper that the impedance of the system varied for when each was oriented to reflect light away from different pulse repetition rates4.

7 A rectifier diode the detector. (see Fig. 2) The signal-to-noise ratios was employed to limit the negative reflected in the configuration with each the Lambertian current pulses from the impedance mismatch block and the off-angle copper were before these reflected pulses could sink into the approximately 2:1. (see Fig. 2) The DET210. device and cause failure due to high reverse bias. photodiode has a broad spectral response8, and The use of the rectifier diode thereby increased the during testing was shown to respond better to the performance of the VCSEL and alleviated the laser light when room lighting was deactivated.

8 Need for strict impedance matching by preventing Therefore, the use of a filter to isolate the narrow pulses with inverted voltage from entering the spectrum of the OPV310 could increase the devices. detected optical Power and, in turn, would increase An Optek OPV310 VCSEL was used for this the resolution of the system further. Additionally, procedure with a Thorlabs DET210 photodiode for currently available Geiger-mode avalanche detection and optical Power measurement. The photodiodes would be more likely to respond to a OPV310 VCSEL emits at 850 nm with a 24- lower number of photons than what was returned degree divergence angle and has a maximum in the m test, and thusly, may realize the goal output of mW under CW conditions7.

9 The of 1 m detection with the OPV310 at the utilized DET210 is a 1 GHz, silicon-PIN output power9. Therefore, the number of photons photodiode with a spectral response from 200 to incident on the block at this reduced Range was 1100 nm 8. The small aperture of the photodiode sufficient for this LIDAR demonstration. The required the use of a 6 cm diameter double-convex maximum output Power was not great enough to lens to focus the reflected light into the detector. do wide-field LIDAR at a Range greater than Before each test, the detector and lens positions m. However, it was possible to focus the beam were optimized for maximum signal detection.

10 For spot to approximately 2 cm in diameter on a target a pulse width of 10 ns, three different duty cycles area at a one-meter Range with a plano-convex lens were investigated to find the peak performance located at the laser aperture. With the Lambertian without thermal rollover. At a duty cycle of 3%, block placed at a target Range of m, a this thermal rollover was noticeable as the output calculated distance of m was Power leveled off with increasing current, while a obtained. (see Table 1). duty cycle showed a nearly linear increase (see Fig. 1). The maximum peak output Power attained was 61mW with a duty cycle of , while the maximum peak output powers of the 1%. 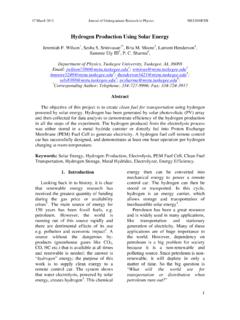 be released back in to the atmosphere. In this particular experiment, hydrogen was used to power a remote control car. Figure 1: Hydrogen production set … 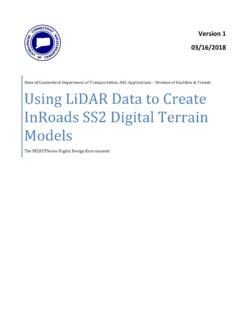 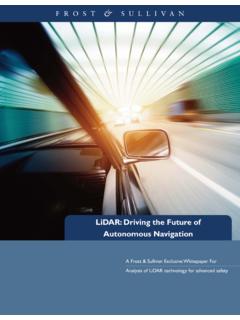 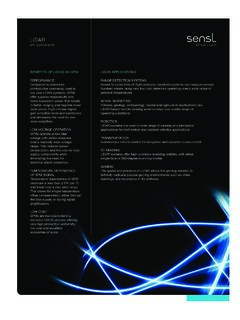 liDAR technology is becoming increasingly important in a wide variety of applications. liDAR is a relative new-comer in the market and has proven utility in fields such 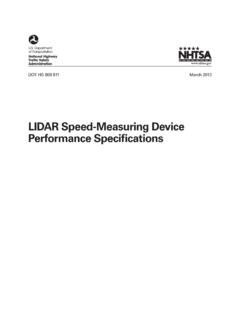