6 40750 GOVERNMENT GAZETTE, 31 MARCH 2017. Glossary Child-minders : Persons who provide care and early learning for six children or fewer, typically in their own homes. Also in some contexts referred to as day mothers . early Childhood care and Education (ECCE) : A term chosen as a qualifier to name some of the Qualifications in this Policy that are intended to develop educators who are able to support and promote early learning and development for babies, toddlers and young children. According to the Higher Education Qualification Sub-framework (HEQSF). (Council on Higher Education [CHE], 2013, p. 19), qualifiers indicate a field of specialisation, in this case ECCE. The use of a qualifier requires that at least 50% of the credits in the qualification and at least 50% of the credits at the exit level of the qualification must be in the field of specialisation. early Childhood Development Educators : Individuals who hold appropriate Qualifications that enable them to deliver or support the delivery of structured early childhood Education programmes for babies, toddlers and young children effectively.

7 Such programmes are focused on stimulating early learning, including formal curricula such as the National Curriculum Framework for Children from Birth to Four, 2015 (NCF). early Childhood Development Practitioners : Persons who provide early childhood development (ECD) services through formal ECD programmes; family services and playgroups; and training, as well as those providing management support services to these workers. early Childhood Development Programmes : Programmes that provide one, or a collection of, daily care , development and early learning services and support to a child from birth until the year before she/he enters school. These programmes include, but are not limited to: Community-based play groups operating for specific hours. Outreach and support programmes for young children and their families/caregivers at a household level. Parenting support and enrichment programmes. Support for the psychosocial needs of young children and their families.

8 ECD programmes provided at partial care facilities and child and youth care centres as contemplated in section 91(1) of the Children's Act, Act 38 of 2005. Any other programme that focuses on the care , development and early learning of children from birth to school-going age and/or their families. early Childhood : The period of human development from birth to the year before a child enters Grade R/formal school. early Childhood Development Services 1: Services or support provided to infants and young children or to a child's parent or caregiver by a government department or civil society organisation with the intention of promoting the child's early emotional, cognitive, sensory, spiritual, moral, physical, social and communication development. Grade R : An institutionalized year of learning for children in the year before Grade 1. 1. Section 91 (2) of the Children's Act, Act 38 of 2005 refers to services intended to promote early childhood development and provided by a person other than the child's parent or caregiver, on a regular basis, to children up to school-going age.

9 3. This gazette is also available free online at STAATSKOERANT, 31 MAART 2017 No. 40750 9. The Department of Basic Education (DBE) has identified three models of provision of Reception Year/Grade R: those within the public primary school system, those at community- based sites and the independent provision of reception year programmes. Higher Education Institutions (HEIs) : Universities and private HEIs accredited by the CHE to offer Higher Education programmes. Initial Professional Qualifications : Qualifications that lead to recognition as a beginning professional in a profession. Post-professional Qualifications : Qualifications that enable further development in a field or profession for people who already hold an initial professional qualification. This gazette is also available free online at 4. 10 No. 40750 GOVERNMENT GAZETTE, 31 MARCH 2017. 1. Background to the Policy early childhood development (ECD) in historical context In South Africa, there have been historical shifts in the way in which early childhood has been defined and understood (Department of Education [DOE], 2001; Ebrahim, 2010).

10 During the apartheid era, the definition of early care and Education gained its currency from service provisioning based on race. Custodial care became associated with provisioning in black pre-schools that received very little government support. early Education was associated with privilege and quality provision, with strong government support widely available to the white population group but much less so for other groups. To address the polarisation of care and Education , the concept of Educare was used to emphasize the need for a focus on Education , health, nutrition and protection (Rickards, 1991). The advent of democracy in 1994 led to the reconstruction of ECD to deal with the inequities of the past. The areas for intervention were captured in the definition of ECD, namely an umbrella term, which applies to the processes by which children from birth to nine years grow and thrive physically, mentally, emotionally, morally and socially (DOE, 1995, ).

DEPARTMENT OF HIGHER EDUCATION AND …

7 DEPARTMENT OF HIGHER EDUCATION AND TRAINING Vote 17 2014/15 Annual Report 2. List of Abbreviations/Acronyms ADEA Association for the Development of Education in Africa

MONITORING AND EVALUATION AND … 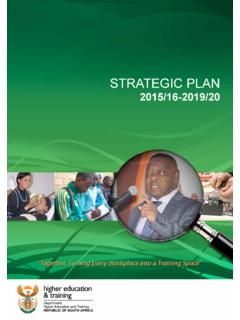 Education in South Africa: Achievements since … 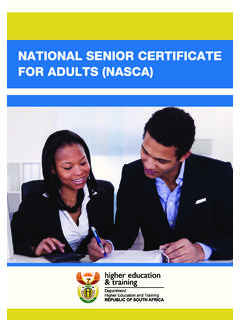 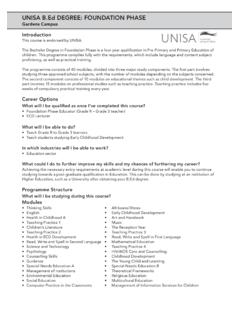 UNISA B.Ed DEGREE: FOUNDATION PHASE Gardens Campus Introduction This course is endorsed by UNISA. The Bachelor Degree in Foundation Phase is a four-year qualification in Pre-Primary and Primary Education of 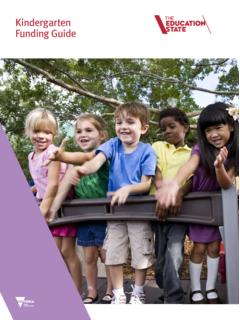 kindergarten funding guide | 3 The Victorian government is making Victoria the Education State. This begins with giving every child a strong start in life, with evidence showing the difference

TO BE COMPLETED BY ALL EDUCATORS - …

EMIS NUMBER *ASS2017-1* TO BE COMPLETED BY ALL EDUCATORS PURPOSE OF SURVEY This survey seeks to obtain demographic, personal and professional information from educators for

Educators, Completed, Be completed by all educators