BIBLE STUDY 19 IYAR 5775. HOD THE POWER OF HUMILITY . Greetings! Welcome to Bible Study. Today is day 34 of the Omer count, week 5 and day 6 as we count the Omer from Passover to Pentecost. The meditation guide on Day 34 is Yesod of Hod: Bonding in HUMILITY . Among the seven shepherds of Israel was Aaron the high priest and older brother of Moses. Aaron is the patriarch who characterizes HUMILITY . During the fifth week of counting the Omer, we examine and refine the emotional attribute of Hod or HUMILITY . HUMILITY and the resulting yielding should not be confused with weakness and lack of self-esteem.

Power, Humility, Hod the power of humility, To god

1 BIBLE STUDY 19 IYAR 5775. HOD THE POWER OF HUMILITY . Greetings! Welcome to Bible Study. Today is day 34 of the Omer count, week 5 and day 6 as we count the Omer from Passover to Pentecost. The meditation guide on Day 34 is Yesod of Hod: Bonding in HUMILITY . Among the seven shepherds of Israel was Aaron the high priest and older brother of Moses. Aaron is the patriarch who characterizes HUMILITY . During the fifth week of counting the Omer, we examine and refine the emotional attribute of Hod or HUMILITY . HUMILITY and the resulting yielding should not be confused with weakness and lack of self-esteem.

2 Hod or HUMILITY is modesty. It is acknowledgement (from the root of the Hebrew word hoda'ah ). It is saying thank you to god . It is clearly recognizing your qualities and strengths and acknowledging that they are not your own; they were given to you by God for a higher purpose than just satisfying your own needs. We were put here for a purpose and that is to serve, to glorify God and help other people and show them the way of life truth and everlasting righteousness. HUMILITY is recognizing how small you are which allows you to realize how large we can become, if we maintain the attitude of HUMILITY .

3 This is what makes HUMILITY so formidable. We have the potential to become the very sons of God spiritual son of God in the family of God and to help Him rule the universe. A full cup cannot be filled. When you're filled with yourself and your needs, I and nothing else' there is no room for more. HUMILITY is the key to transcendence; to reach beyond self. Only true HUMILITY gives you the POWER of total objectivity. HUMILITY is sensitivity; it is healthy shame out of recognition that you can be better than you are and that you can expect more of yourself. Although HUMILITY is silent it is not a void.

4 It is a dynamic expression of life that includes all seven qualities of love, discipline, compassion, endurance, HUMILITY , bonding and sovereignty.. Philippians 2 is a wonderful chapter about unity through HUMILITY where we read about the example of Jesus Christ our Lord and Savior. Verses 5-11 Let this mind be in you which was also in Christ Jesus, who, being in the form of God, did not consider it robbery to be equal with God, but made Himself of no reputation (emptied himself), taking the form of a bondservant and coming in the likeness of men (human flesh). And being found in appearance as a man, He humbled Himself and became obedient to the point of death, even the death of the cross.

5 Therefore, God also has highly exalted Him and given Him the name which is above every name, that at the name of Jesus every knee should bow, of those in heaven, and of those on earth, and of those under the earth, and that every tongue should confess that Jesus Christ is Lord, to the glory of God the Father. This teaches us that we are not to be full of self, but humble as James 4:6 says God gives us more grace. That is why Scripture says, God opposes the proud but shows favor to the humble. Verses 7-8, 10 Submit (humble) yourselves then, to god . Resist 1. the devil, and he will flee from you.

6 Come near to god and he will come near to you.. Humble yourselves before the Lord, and he will lift you up. 1 Peter 5:5-7 Likewise you younger people, submit yourselves to your elders. Yes, all of you be submissive to one another, and be clothed with HUMILITY , for God resists the proud, but gives grace to the humble. Therefore humble yourselves under the mighty hand of God, that He may exalt you in due time, casting all your care upon Him, for He cares for you.. HUMILITY is a marvelous trait that I find often ignored and overlooked in life. People tend to be proud, arrogant and walk on this earth thinking how great they are.

7 Human beings need to realize that Christ meant what he said in the beatitudes. Matthew 5: 5 . Blessed are the meek (humble) for they shall inherit the earth. God wants his people to be meek and humble. There is strength in HUMILITY . It is not weakness. Meekness does not equal weakness. It is strength of character and willingness to endure trials and tests which can be very oppressive in themselves. Why do we endure? We endure because we have faith in God that He will intervene and that He will deliver us in due time in His sight. He cares for us and wants us to learn the lesson of HUMILITY .

8 When Jacob returned from the land of Laban and the Syrians, back into the Promised Land with his two wives and his children, he was very fearful of his brother Esau. He knew his brother Esau fiercely hated him and might attack him and all that were with him leaving him with nothing. Genesis 32: 7-12 So Jacob was greatly afraid and distressed; and he divided the people that were with him, and the flocks and herds and camels, into two companies. And he said, If Esau comes to the one company and attacks it then the other company which is left will escape.' . Then Jacob said, O God of my father Abraham and God of my father Isaac, the LORD who said to me, Return to your country and to your family, and I will deal well with you': I am not worthy of the least of all the mercies and of all the truth which You have shown Your servant.

9 For I crossed over this Jordan with my staff, and now I have become two companies. Deliver me, I pray, from the hand of my brother, from the hand of Esau; for I fear him, lest he come and attack me and the mother with the children. For You said, I will surely treat you well, and make your descendants as the sand of the sea, which cannot be numbered for multitude.' . Jacob selected a gift for his brother Esau: two hundred female goats and twenty male goats, two hundred ewes and twenty rams, thirty female camels with their young, forty cows and ten bulls, and twenty female donkeys and ten male donkeys.

10 He put them in the care of his servants, each herd by itself, and said to his servants, Go ahead of me, and keep some space between the herds. He instructed the one in the lead: When my brother Esau meets you and asks, Who do you belong to, and where are you going, and who owns all these animals in front of you?' Then you are to say, They belong to your servant Jacob. They are a gift sent to my lord Esau, and he is coming behind us.' . Jacob was left alone, and a Man wrestled with him till daybreak. When the Man saw that he could not overpower him, he touched the socket of Jacob's hip so that his hip was put out of joint as he wrestled with the man. 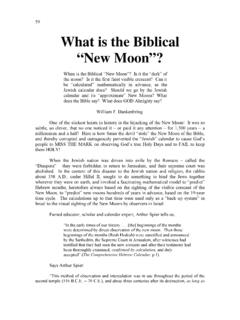 What is the Biblical New Moon

Moon, What is the biblical, What, Biblical

One of the seven wonders of the world, the Great Pyramid at Giza has been the object of intense mystical and religious speculation for the past 4,500 years.

The Awesome Secret of Counting the Omer to …

Secrets, Awesome, Counting, The awesome secret of counting the

Spiritual Breakthrough The Awesome Power of …

65 . Spiritual Breakthrough . The Awesome Power of Faith, Prayer and Fasting! Many, if not all, of God’s people are often beset by some affliction,

The Secret and Power of the Prayer of Jabez - …

30 The Secret and Power of the Prayer of Jabez . A short, powerful and mysterious prayer is mentioned in the first book of Chronicles. The story is …

Prayer, The prayer of jabez, Jabez

What Are the Seven Churches - Triumph Pro

1 A New Look at The Seven Churches of Revelation Jesus Christ said, "I will build my Church" (Matt.16:18). Was that Church foretold to always be UNITED, and of

What, Christ, Jesus, Seven, Churches, Jesus christ, Triumph, What are the seven churches 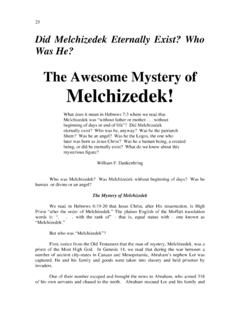 The Awesome Mystery of Melchizedek! - NewsFlash 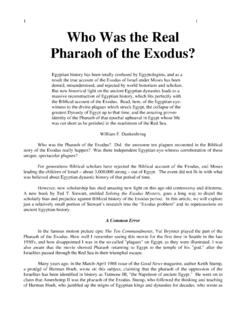 Who Was the Pharaoh - Triumph Pro

Who was the Pharaoh of the Exodus? Did the awesome ten plagues recounted in the Biblical story of the Exodus really happen? Was there independent Egyptian eye-witness corroboration of these unique, spectacular plagues?

Pharaoh, Who was the pharaoh 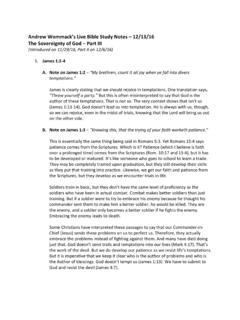 This is a pivotal point. Those who believe God has ordained the problems in their lives to work some redemptive virtue will submit to those problems and therefore to

1 Rules of Engagement - Cindy Trimm Activation Prayer . A. s GOD'S OFFICIAL legislator and law enforcement agent: I come in the name of the resurrected Jesus, whose I am and whom I serve, "that at the name of Jesus … 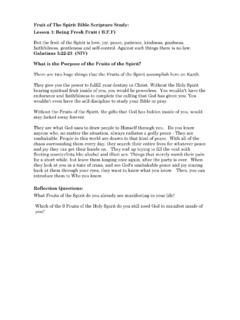 YPD Bible Study for the year - Fruit of The Spirit

Lesson 3: Love Happens By this shall all men know that ye are my disciples, if ye have love one to another. ~ John 13:35 You must love the Lord your God with all your heart, all your soul, and all your

Fruit, Spirit, Fruit of the spirit 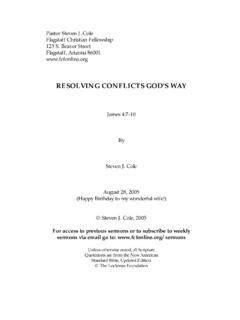 1 August 28, 2005 James Lesson 16 Resolving Conflicts God’s Way James 4:7-10 A dour Englishman was seated on a train between two ladies arguing about the window.

Take Up Your Cross Daily - Let God be True

Take Up Your Cross Daily “And he said to them all, If any man will come after me, let him deny himself, and take up his cross daily, and follow me.”

Your, Cross, Daily, Take, Take up your cross daily 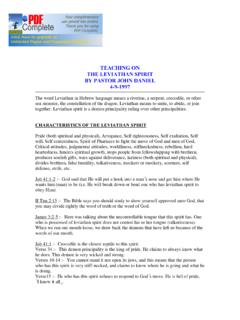 TEACHING ON THE LEVIATHAN SPIRIT BY PASTOR …

TEACHING ON THE LEVIATHAN SPIRIT BY PASTOR JOHN DANIEL 4-9-1997 The word Leviathan in Hebrew language means a riverine, a serpent, crocodile, or other 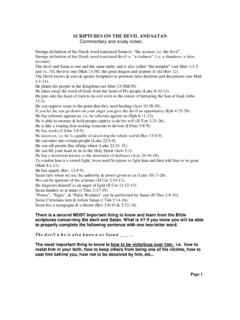 SCRIPTURES ON THE DEVIL AND SATAN - SFAW.org

SCRIPTURES ON THE DEVIL AND SATAN Commentary and study notes: Strongs definition of the Greek word translated Satan is: “the accuser, i.e. the devil”,

Doctrinal Elements of a Curriculum Framework - …