Homeowners Associations and the Business …

Homeowners Associations and the Business Judgment Rule: Bad Law Should the Business judgment rule (herein BJR ) rather than the alternative, reasonableness test for decision-making be the standard for HOA board actions? The courts grant HOA boards broad rights over Homeowners by currently holding that the board is the best decider of what's good for the HOA, not the courts, regardless of any test of the reasonableness of actions. We believe that the rational for this position was reached by faulty analysis and a bias toward treating the HOA government as the best arbiter of the stability of the common living arrangement.

Homeowners Associations and the Business Judgment Rule: Bad Law Should the business judgment rule (herein “BJR”) rather than the alternative, reasonableness test

1 Homeowners Associations and the Business Judgment Rule: Bad Law Should the Business judgment rule (herein BJR ) rather than the alternative, reasonableness test for decision-making be the standard for HOA board actions? The courts grant HOA boards broad rights over Homeowners by currently holding that the board is the best decider of what's good for the HOA, not the courts, regardless of any test of the reasonableness of actions. We believe that the rational for this position was reached by faulty analysis and a bias toward treating the HOA government as the best arbiter of the stability of the common living arrangement.

2 We believe this holding deprives Homeowners of their due process rights, especially when board the decisions relate to rules and regulations regarding use of private property and the conduct of the homeowner . The 2003 Johnson opinion, Arizona appellate, differs from the other earlier cases cited below. The following citations will appear confusing or conflicting, but that is the nature of the law. In some decisions in favor of deference, look for key words like arbitrary and capricious , good faith , public policy and best interests . Homeowners must be aware of the court rulings giving deference to board's decision-making, and the fact that they agreed to the broad powers given the HOA.

3 1. Please note the frequent citations of the Lamden case, in which there was a strong lobbying . effort by CAI member attorneys and CAI itself. (See D, Cases, below). A. THE COURT RECORD. a. BJR justification, from Lamden (emphasis added). "The common law Business judgment rule has two components-one which immunizes [corporate] directors from personal liability if they act in accordance with its requirements, and another which insulates from court intervention those management decisions which are made by directors in good faith in what the directors believe is the organization's best interest. A hallmark of the Business judgment rule is that, when the rule's requirements are met, a court will not substitute its judgment for that of the corporation's board of directors.

4 (See generally, Katz v. Chevron Corp. (1994) 22 1352).". "The Business judgment rule has been justified primarily on two grounds. First, that directors should be given wide latitude in their handling of corporate affairs because the hindsight of the judicial process is an imperfect device for evaluating Business decisions. Second, '[t]he rule recognizes that shareholders to a very real degree voluntarily undertake the risk of bad 1. See last page for Legal Disclaimer. George K. Staropoli Page 1 1/19/2007. Business judgment; investors need not buy stock, for investment markets offer an array of opportunities less vulnerable to mistakes in judgment by corporate officers.

5 ' (Frances T., supra, 42 at p. 507 (1986), fn. 14, quoting 18B (1985) Corporations, 1704).. [Justification in applying BJR was that the condo association performed Business functions like a landlord]. The court shows it bias with, a differential Business judgment rule' or a more intrusive one of objective reasonableness' . b. Reasonableness standard in Nahrstedt Although no one definition of the term reasonable' has gained universal acceptance, most courts have applied what one commentator calls equitable reasonableness,' upholding only those restrictions that provide a reasonable means to further the collective health, happiness and enjoyment of life' of owners of a common interest development.

6 (Note, Business Judgment, supra , 64 Kent at p. 655.) Others would limit the reasonableness' standard only to those restrictions adopted by majority vote of the Homeowners or enacted under the rulemaking power of an association 's governing board, and would not apply this test to restrictions included in a planned development project's recorded declaration or master deed. Because such restrictions are presumptively valid, these authorities would enforce them regardless of reasonableness.. When an association determines that a unit owner has violated a use restriction, the association must do so in good faith, not in an arbitrary or capricious manner, and its enforcement procedures must be fair and applied uniformly.

7 In Hidden Harbour Estates v. Basso ( 1981) 393 637, the Florida court distinguished two categories of use restrictions: use restrictions set forth in the declaration or master deed of the condominium project itself, and rules promulgated by the governing board of the condominium owners association or the board's interpretation of a rule. ( Id. at p. 639.) The latter category of use restrictions, the court said, should be subject to a "reasonableness". test, so as to somewhat fetter the discretion of the board of directors.' ( Id. at p. 640.) Such a standard, the court explained, best assures that governing boards will "enact rules and make decisions that are reasonably related to the promotion of the health, happiness and peace of mind" of the project owners, considered collectively.

8 By contrast, restrictions contained in the declaration or master deed of the condominium complex, the Florida court concluded, should not be evaluated under a reasonableness' standard. ( Hidden Harbour Estates v. Basso, supra, 393 ) Rather, such use restrictions are "clothed with a very strong presumption of validity" and should be upheld even if they exhibit some degree of unreasonableness. Nonenforcement would be proper only if such restrictions were arbitrary or in violation of public policy or some fundamental constitutional right.. Generally, courts will uphold decisions made by the governing board of an owners association so long as they represent good faith efforts to further the purposes of the common interest development, are consistent with the development's governing documents, and comply with public policy.

9 51 Ohio St. at p. 43.. George K. Staropoli Page 2 1/19/2007. c. Preferred BJR in Levandusky, (emphasis added). As courts and commentators have noted, the cooperative or condominium association is a quasi- government a little democratic sub society of necessity' (Hidden Harbour Estates v. Norman, 309 180).. [T]his reasonableness standard originating in the quite different world of government agency decisionmaking has found favor with courts reviewing board decisions. The more limited judicial review embodied in the Business judgment rule is preferable. In the context of the decisions of a for-profit corporation, courts are ill equipped and infrequently called on to evaluate what are and must be essentially Business judgments '.

10 D. Rejecting BJR in Johnson, an Arizona ruling (emphasis added), The court defers to the decisions of others only in limited circumstances. For example, if parties have provided for dispute resolution Similarly, the superior court will uphold the determinations of a state administrative agency .. (citing Divizio v. Kewin Enters., Inc., 136 Ariz. 476, 481, 666 1085, 1090 (App. 1983)). The interpretation of restrictive covenants is a question of law for the court. Id. ( The interpretation of a contract is a matter of law and not a question of fact.'). In interpreting the meaning of a covenant, the superior court does not defer to the interpretation given by the association . 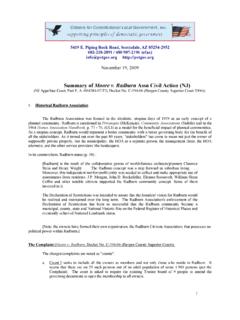 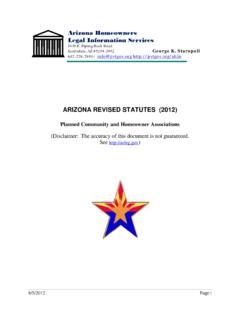 33-442. Prohibition on transfer fees; exceptions; definitions A. A provision in a declaration, covenant or any other document relating to real property in this state is 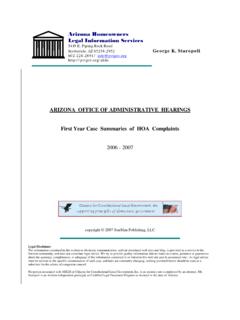 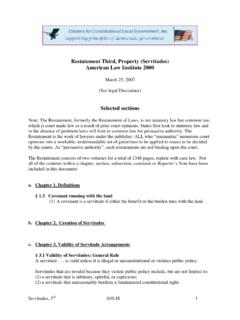 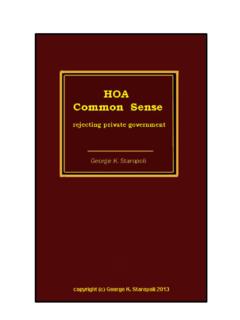 HOA Common Sense Page 1 The New America of HOA-Land, No. 1 This Commentary is the first in a series on the topic of HOA Common Sense. The political and social changes in our society brought about by the adoption and acceptance of the HOA legal scheme has created a new America of 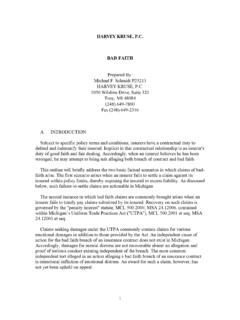 3 even though the insurer’s actions were not actually dishonest or fraudulent. Id. at 136-137 (footnotes omitted). In addition to providing the instructional definition of bad faith… 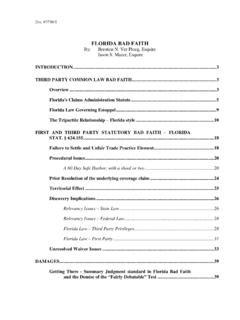 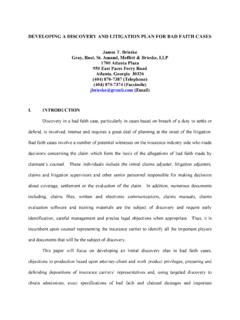 Developing a Discovery and Litigation Plan for Bad …

Developing a Discovery and Litigation Plan for Bad Faith Cases ǀ 2 documents from the policyholder. Although this paper is based upon my experiences defending 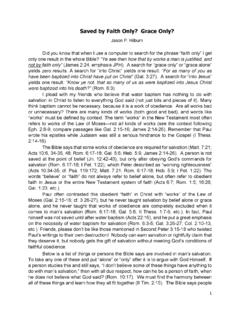 Saved by Faith Only? Grace Only? - the Bible Domain

1 Saved by Faith Only? Grace Only? Jason P. Hilburn Did you know that when I use a computer to search for the phrase “faith only” I get only one result in the whole Bible? 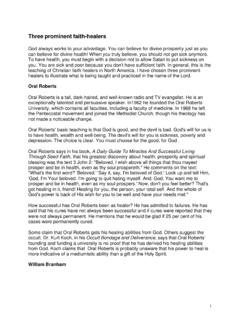 Overview 1. The sections do different things and have different rules – it matters whether you are operating under s. 24(1) or 52. 2. Each section gives you a menu of 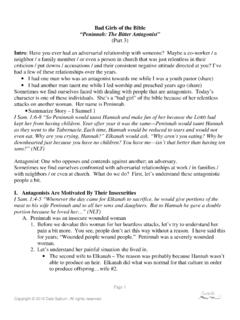 Bad Girls of the Bible “Peninnah: The Bitter …