A Book Report on How The Mighty fall (And Why Some Companies Never Give In). By Jim Collins (Book Report by Gary Tomlinson ). Preface: Decline Can Be Avoided. Decline Can Be Detected. Decline Can Be Reversed. Amidst the desolate landscape of fallen great companies, Jim Collins began to wonder: How do the Mighty fall ? Can decline be detected early and avoided? How far can a company fall before the path toward doom becomes inevitable and unshakeable? How can companies reverse course? In How the Mighty fall , Collins confronts these questions, offering leaders the well-founded hope that they can learn how to stave off decline and, if they find themselves falling, reverse their course.

Tomlinson & Associates ⧫ “Organizational Excellence – A Culture of Discipline” ⧫ www.gary-tomlinson.com Page 1 A Book Report on How The Mighty Fall

Fall, Mighty, How the mighty fall

1 A Book Report on How The Mighty fall (And Why Some Companies Never Give In). By Jim Collins (Book Report by Gary Tomlinson ). Preface: Decline Can Be Avoided. Decline Can Be Detected. Decline Can Be Reversed. Amidst the desolate landscape of fallen great companies, Jim Collins began to wonder: How do the Mighty fall ? Can decline be detected early and avoided? How far can a company fall before the path toward doom becomes inevitable and unshakeable? How can companies reverse course? In How the Mighty fall , Collins confronts these questions, offering leaders the well-founded hope that they can learn how to stave off decline and, if they find themselves falling, reverse their course.

2 Collins' research project more than four years in duration uncovered five step- wise stages of decline: Stage 1: Hubris Born of Success Stage 2: Undisciplined Pursuit of More Stage 3: Denial of Risk and Peril Stage 4: Grasping for Salvation Stage 5: Capitulation to Irrelevance or Death By understanding these stages of decline, leaders can substantially reduce their chances of falling all the way to the bottom. Great Companies Can Stumble, Badly, and Recover. Every institution, no matter how great, is vulnerable to decline. There is no law of nature that the most powerful will inevitably remain at the top.

3 Anyone can fall and most eventually do. But, as Collins' research emphasizes, some companies do indeed recover in some cases, coming back even stronger even after having crashed into the depths of Stage 4. Decline, it turns out, is largely self-inflicted, and the path to recovery lies largely within our own hands. We are not imprisoned by our circumstance, our history, or even our staggering defeats along the way. As long as we never get entirely knocked out of the game, hope always remains. The Mighty can fall , but they can often rise again. Tomlinson & Associates Organizational Excellence A Culture of Discipline Page 1.

4 Introduction: When you are at the top of the world, the most powerful nation on Earth, the most successful company in your industry, the best player in your game, your very power and success might cover up the fact that you're already on the path to decline. So, how would you know? The question How would you know? captured my imagination and became part of the inspiration for this book. How do the Mighty fall ? If some of the greatest companies in history can collapse from iconic to irrelevant, what might we learn by studying their demise, and how can others avoid their fate?

5 Might it be possible to detect decline early and reverse course, or even better, might we be able to practice preventive medicine? I began to think of decline as analogous to a disease, perhaps like cancer, that can grow on the inside while you still look strong and healthy on the outside. It's not a perfect analogy because organizational decline, unlike cancer, is largely self-inflicted. Still, the disease analogy might be helpful. Allow me to share a personal story to illustrate. On a cloudless August day in 2002, my wife, Joanne, and I set out to run the long uphill haul to Electric Pass, outside Aspen, Colorado, which starts at an altitude of about 9,800 feet and ends above 13,000 feet.

6 At about 11,000 feet, I capitulated to the thin air and slowed to a walk, while Joanne continued her uphill assault. As I emerged from tree line, where thin air limits vegetation to scruffy shrubs and hardy mountain flowers, I spotted her far ahead in a bright-red sweatshirt, running from switchback to switchback toward the summit ridge. Two months later, she received a diagnosis that would lead to two mastectomies. I realized, in retrospect, that at the very moment she looked like the picture of health pounding her way up Electric Pass, she must have already been carrying the carcinoma.

7 That image of Joanne, looking healthy yet already sick, stuck in my mind and gave me a metaphor. I've come to see institutional decline like a staged disease: harder to detect but easier to cure in the early stages, easier to detect but harder to cure in the later stages. An institution can look strong on the outside but already be sick on the inside, dangerously on the cusp of a precipitous fall . Five Stages of Decline: Having studied both sides of the coin, how companies become great and how companies fall , I've concluded that there are more ways to fall than to become great.

8 Assembling a data-driven framework of decline proved harder than constructing a data-driven framework of ascent. Even so, a staged framework of how the Mighty fall did emerge from our data. The model consists of five stages that proceed in sequence. At the end of each of the first four stages, I'll summarize the stage with a series of markers. Not every marker shows up in every case of decline, and the presence of a marker does not necessarily mean that you have a disease, but it does indicate an increased possibility that you're in that stage of decline. You can use these markers as a self-diagnostic checklist.

9 Tomlinson & Associates Organizational Excellence A Culture of Discipline Page 2. Stage 1: Hubris Born of Success. Great enterprises can become insulated by success; accumulated momentum can carry an enterprise forward, for a while, even if its leaders make poor decisions or lose discipline. Stage 1. kicks in when people become arrogant, regarding success virtually as an entitlement, and they lose sight of the true underlying factors that created success in the first place. When the rhetoric of success ( We're successful because we do these specific things ) replaces penetrating understanding and insight ( Where successful because we understand why we do these specific things and under what conditions they would no longer work ), decline will very likely follow.

10 Luck and chance play a role in many successful outcomes, and those who fail to acknowledge the role luck may have played in their success and thereby overestimate their own merit and capabilities have succumbed to hubris. Markers for Stage 1: Success Entitlement, Arrogance: Success is viewed as deserved, rather than fortuitous, fleeting or even hard earned in the face of daunting odds; people begin to believe that success will continue almost no matter what the organization decides to do, or not do. Neglect of a Primary Flywheel: Distracted by extraneous threats, adventures, and opportunities, leaders neglect a primary flywheel, failing to renew it with the same creative intensity that made it great in the first place. 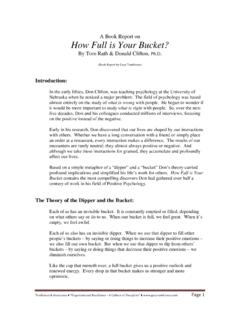 How Full is Your Bucket? - Gary E Tomlinson's …

Tomlinson & Associates ⧫ “Organizational Excellence – A Culture of Discipline” ⧫ www.gary-tomlinson.com Page 1 A Book Report on How Full is Your Bucket?

Your, Full, Gary, Bucket, How full is your bucket 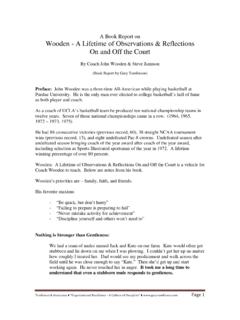 Tomlinson & Associates ⧫ “Organizational Excellence – A Culture of Discipline” ⧫ www.gary-tomlinson.com Page 5 2. Try to have fun without trying to be funny. 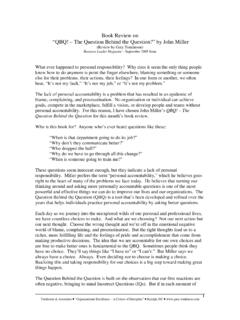 Book Review - QBQ! - The Question Behind The …

Question, Excellence, Behind, The question behind the

Tomlinson & Associates ⧫ “Organizational Excellence – A Culture of Discipline” ⧫ www.gary-tomlinson.com Page 2 “It’s your ship.” Show me an organization in which emplo yees take ownership, and I

Your, Ship, It s your ship

Book Report - Made to Stick - gary-tomlinson.com

In Made to Stick , accomplished educators and idea collectors Chip and Dan Heath tackle head-on these vexing questions. Made to Stick is a book that will transform the way you communicate ideas. 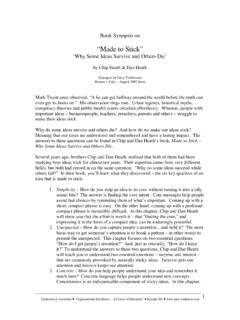 “Made to Stick” - Gary E Tomlinson

In their book, Made to Stick – Why Some Ideas Survive and Others Die, Chip and Dan Heath show you how a little focused effort can make almost any idea stickier, and a sticky idea is an idea that is more likely to make a difference.

Made, Stick, Made to stick 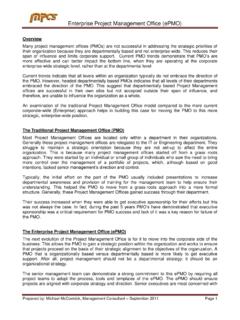 Enterprise Project Management Office (ePMO) Prepared by: Michael McCormick, Management Consultant – September 2011 Page 4 It is important for the ePMO to provide early warning signs to management about difficulties that 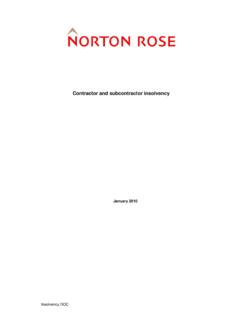 Insolvency.DOC 1 Early warning signs: what sort of behaviour or warning signs might indicate a contractor beginning to get into trouble? 1.1 The contractor's employees not turning up for work or a general decrease in the

21 Ways to Excel at Project Management

21 Ways to Excel at Project Management 1 Project Smart www.projectsmart.com About This BookAbout This Book “We are all engaged on a journey to achieve

Foundations 4-5 4.7.2 Contractor's Submissions At an early stage after the award, the contractor will be required to submit the following information 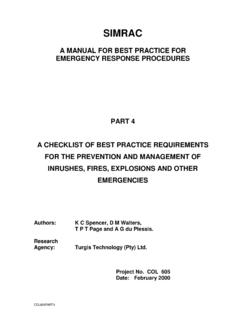