How to Get the Best Performance from Your Futaba 2.4GHz ...

How to Get the Best Performance from your Futaba FASST Aircraft Receivers Every R/C pilot learns by experience what methods work well for installing and maintaining radio equipment. At the same time, we also want our aircraft to have the advantage of up-to-the-minute means that every now and then, we must master some new techniques. Spread spectrum radio technology offers the perfect example. When Futaba introduced FASST radio equipment, R/C hobbyists quickly jumped to the front of electronic technology's cutting edge. Not surprisingly, those new, state-of-the-art receivers have significant differences compared to old 72 MHz units.

How to Get the Best Performance from Your Futaba ® 2.4GHz FASST™ Aircraft Receivers Every R/C pilot learns by experience what methods work well for installing and

1 How to Get the Best Performance from your Futaba FASST Aircraft Receivers Every R/C pilot learns by experience what methods work well for installing and maintaining radio equipment. At the same time, we also want our aircraft to have the advantage of up-to-the-minute means that every now and then, we must master some new techniques. Spread spectrum radio technology offers the perfect example. When Futaba introduced FASST radio equipment, R/C hobbyists quickly jumped to the front of electronic technology's cutting edge. Not surprisingly, those new, state-of-the-art receivers have significant differences compared to old 72 MHz units.

2 So it's time to change a few old habits. Below are some recommendations for updating the way you install and maintain radio gear. Make them a part of your routine, and you'll enjoy the best Performance from your FASST radio gear. 1. Don't wrap your FASST receiver in foam. Protecting your receiver from vibration by wrapping it in foam used to be a must . Not so with FASST receivers. Unlike 72 MHz equipment, they're not as vulnerable to vibration. Using less foam lets them operate cooler which is a plus for all electronics. Tip: To keep the receiver cooler use small foam blocks (like standoffs) so that there is an air channel around the receiver.

3 2. Shade your model from sunlight when not flying. Clear canopies expose the radio compartment to direct sunlight which results in additional heat in the model interior. This causes no problems during flight, but makes shading your model on the ground very important. Cover the canopy with a white towel;. or better yet, park your airplanes in the shade. This will help keep the electronic components cool. Tip: It is important to note that lighter covering colors will absorb less heat whereas darker colors will absorb more heat. 3. Mount your FASST receiver away from heat sources.

4 We had to avoid mounting 72 MHz receivers near anything that might produce RF. noise. That's not as much of a concern with FASST receivers you should instead make sure that you're mounting the unit in the coolest part of the radio compartment. Stay away from the muffler exhaust, battery packs, regulators or any other heat source. We also recommend that you use the receiver's long, narrow side as its base (rather than mounting it with the bottom flat against the radio compartment floor). Secure the receiver using a Velcro strap or gel tape. We hope that these tips help you with your FASST receiver installation and maintenance.

5 If you have any questions, please let us know. Just contact us at the Futaba Service Center, by e-mail at: 1M23N20001. Important: The band offers different characteristics than that of the conventional 50 MHz and 72 MHz. As such, FASST transmitter module, system and receiver compatibility we strongly encourage you to read this manual carefully Receiver prior to utilizing the TM-14 and R6014FS FASST system. Transmitter R607FS R608FS. R606FS. R617FS R6014FS. Thank you for purchasing the TM-14 FASST transmitter Multi-ch mode Okay module and R6014FS receiver. This system is designed for TM-14 Module 7ch mode Okay Okay use only with the Futaba transmitters indicated elsewhere in 8ch mode Okay FASST Air System this manual.

6 In order to use the TM-14 transmitter module, TM-8 Module 7ch mode Okay TM-14 RF Module you will need to carefully remove the existing transmitter TM-7 Module Okay and module and replace it with the TM-14 transmitter module. The T7C System Okay Okay R6014FS Receiver receiver R6014FS, as the model number indicates, is capable of controlling models up to 14(fourteen channels)- 12(twelve). T6EX System Okay Okay . proportional and two digital. Please note: The installation of the R6014FS differs slightly from that of a typical receiver. Please pay special attention to the information contained within this PDQXDO LQ RUGHU WR KDYH D SOHDVDQW \LQJ H[SHULHQFH.]

8 Usage Precautions: Instruction Manual 1) Prior to utilizing any radio control system, it is strongly recom- mended that you read and abide by the Safety Code created Repair Service (in ) $SSOLFDEOH V\VWHPV by the Academy of Model Aeronautics as well as any site spe- ,I DQ\ GLI FXOWLHV DUH HQFRXQWHUHG ZKLOH VHWWLQJ XS RU RSHUDWLQJ \RXU 70 WUDQVPLWWHU ci c rules and regulations that might exist. Doing so will greatly PRGXOH DQG 5 )6 UHFHLYHU SOHDVH FRQVXOW WKLV LQVWUXFWLRQ PDQXDO UVW )RU IXUWKHU T12FG, T12Z and T14MZ. increase your enjoyment of the hobby. assistance you may also refer to your hobby dealer, or contact the Futaba Service Center *Each of the aforementioned transmitters includes a region speci c at the web site, fax or telephone number below: code.

9 This code varies depending upon the region in which the trans- 2) In order to maintain complete control of your aircraft it is im- mitter was purchased. If the region speci c code within the transmit- portant that it remains visible at all times. Flying behind large , , ter does not match that of the TM-14 module an error message will objects such as buildings, grain bins, etc. is not suggested. Fax (217) 398-7721, Tel (217) 398-0007 be displayed on the screen. For example, when using an incorrect Doing so may result in the reduction of the quality of the radio If you are unable to resolve the issue, pack the system in its original container with module in either the T14MZ or T12Z, the error message will indicate: frequency link to the model.

10 A note enclosed and a thorough, accurate GHVFULSWLRQ RI WKH GLI FXOW\ ,QFOXGH WKH "MISMATCHED RF MODULE". With the T12FG, the on-screen mes- sage will be as follows: "INCORRECT RF MODULE". In either situ- 3) Please do not grasp the transmitter module's antenna during following in your note: ation, we suggest that you contact the Futaba Service Center at the ight. Doing so may degrade the quality of the radio frequency Symptoms (Including when the problem occurred) address provided elsewhere within this manual. transmission. System (Transmitter, Receiver, Servos and model numbers). 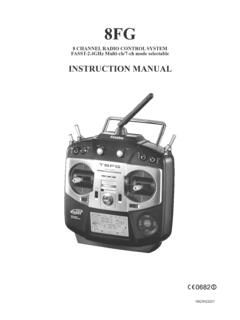 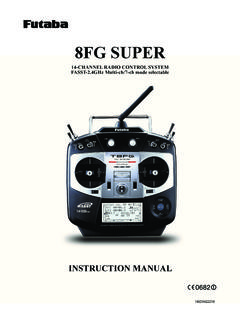 Champaign, Illinois (217) 398-8970, Ext 5 airsupport@greatplanes.com GPMA1208 READ THROUGH THIS MANUAL BEFORE STARTING CONSTRUCTION. IT …

PROTECT YOUR MODEL, YOURSELF & OTHERS – FOLLOW THIS IMPORTANT SAFETY PRECAUTION Your Top Flite F4U Corsair is not a toy, but rather a sophisticated, working model that 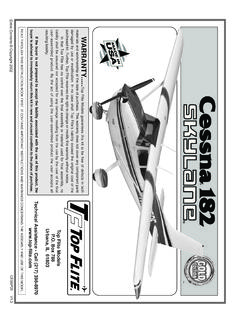 Your Cessna 182 Skylane is not a toy, but rather a sophisticated, working model that func-tions very much like an actual airplane. Because of its realistic performance, the 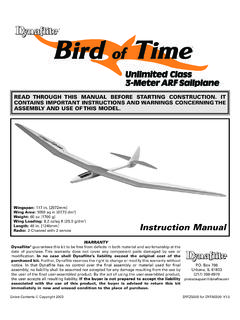 structurally sound. Be sure to check clevises or other connections often and replace them if they show signs of wear or fatigue. 7. If you are not already an experienced R/C 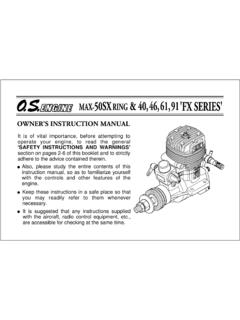 It is of vital importance, before attempting to operate your engine, to read the general 'SAFETY INSTRUCTIONS AND WARNINGS' section on pages 2-4 of this booklet and to 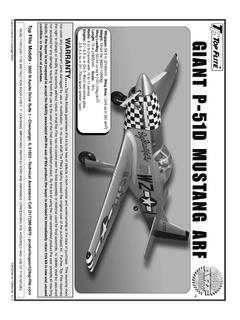 1. Your Top Flite Giant P-51D Mustang ARF should not be considered a toy, but rather a sophisticated, working model that functions very much like a full-size airplane. 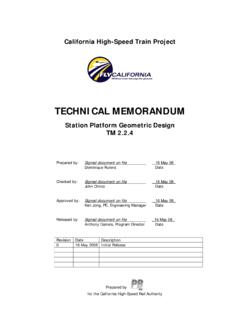 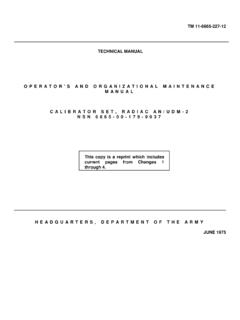 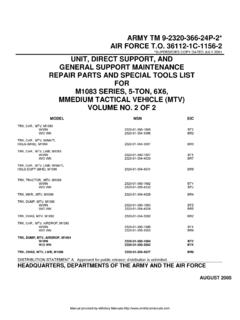 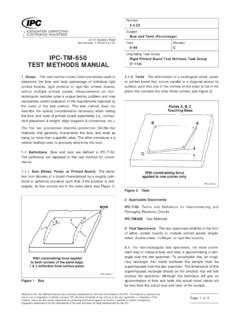 5.3.2 Support the other two corners with leveling jacks or some other appropriate devices, ensuring the two raised cor-ners are of equal height from the datum surface. This may be checked by using the dial indicator (see Figure 7). 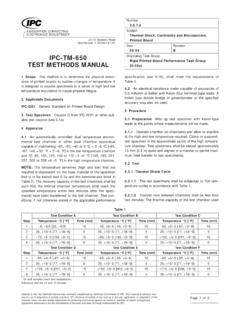