\\Server3\sales\Bulletins\EM-I\Hydrogen Sulfide Control and Removal.doc Concentrations of H2S as low as 0.2 ppm will promote the growth of Beggiatoa.The range of hydrogen sulfide concentration in usable sulfur waters is below 10 ppm.

2 Occurrence in surface supplies is primarily by groundwater intrusion; however, with the rising pollution of natural waters by sewage and industrial wastes, surface waters may become contaminated with Hydrogen Sulfide . Sulfides in well water are probably produced through chemical and bacterial changes under anaerobic conditions far underground. Sulfates may be reduced to sulfides by organic matter under anaerobic conditions, and the resultant metallic Sulfide changed to Hydrogen Sulfide by the action of carbonic acid. The sulfate reducing bacteria (Desulfovibrio desulfuricans) are another source of Hydrogen Sulfide production.

3 In anaerobic environments these bacteria convert sulfates and other sulfur compounds to H2S. They have a growth range of pH to and are found to exist in temperatures of 0 to 100 C, with an optimum range of 24 to42 C. Another group of bacteria also plays an important part in sulfur bearing waters. These are the Sulfide oxidizing forms. The most prevalent are Beggiatoa and Thiobacillus. Beggiatoa are filamentous white sulfur bacteria that obtain the energy necessary for their growth by oxidizing the Sulfide ion to colloidal sulfur, which is then stored in their cells. Brief exposures, (30 minutes or less) to H2S concentrations as low as percent by volume of air may be fatal.

4 The gas is highly soluble in water to the extent of 4000 mg/l at 20 C and one atmosphere. The minimum detectable concentration by taste in water is given as mg/l. At pH 7, Hydrogen Sulfide is approximately 50 percent of the total dissolved sulfides; at pH 5, it is practically 100 percent of the total; at pH 9, it is nearly all hydrosulfide ion. Therefore the existence of Hydrogen Sulfide in sulfur-bearing waters is pH dependent. This scientific fact has been well documented. Whenever the equilibrium between the hydrosulfide ion and the Hydrogen Sulfide in solution is upset, as when H2S is removed by oxidation, the shift will be to form more H2S from the remaining dissolved sulfides to reestablish the equilibrium.

5 This stored sulfur gradually disappears by metabolic action, being itself oxidized to sulfate to yield more energy. The primary objection to waters containing Hydrogen Sulfide is the offensive rotten-egg taste and odor. The secondary objection is the marked corrosiveness of these waters to both metals and concrete structures. Another serious problem is their ability to promote luxuriant blooms of the various types of filamentous sulfur bacteria that lead to a general degradation of water quality in the system. The presence of H2S will turn silverware black, discolor lead base paint, make bathing in tubs or showers extremely unpleasant, and stain all plumbing fixtures.

6 The sulfides in the water react with iron from the mains to form a suspension of iron Sulfide that causes a discoloration of the water. This suspension makes laundering almost impossible. The presence of Hydrogen Sulfide is noticeable to the extent of ppm, even in cold water. If the pH is high, the odor may be slight. \\Server3\sales\Bulletins\EM-I\ Hydrogen Sulfide Control and Concentrations of H2S as low as ppm will promote the growth of Beggiatoa. The range of Hydrogen Sulfide concentration in usable sulfur waters is below 10 ppm. Notable exceptions are the Wadsworth Plant of the Southern California Water Company and the Santa Barbara supply, where the H2S content in the raw waters sometimes reaches 20 ppm.

8 This formation of free sulfur is readily evident as a milky blue turbidity (the Tyndall effect). Choppin and Faulkenberry state that the oxidation of the alkali sulfides is not simple and direct and may yield as end polysulfides, sulfites, and thiosulfates in addition to elemental sulfur and sulfates. The relevancy of this statement is based on practical evidence that most sulfur-bearing waters that have been treated for Hydrogen Sulfide Removal will exhibit some magnitude of odor in hot water systems. While the odor is not that of Hydrogen Sulfide , it is a sulfurous odor. Monscvitz and Ainsworth believe that this odor is the result of the formation of polysulfides in the oxidation reaction of Hydrogen Sulfide .

9 Given time in days, these polysulfides will eventually oxidize to sulfates in the presence of dissolved oxygen in the water. If dissolved oxygen is not present, as occurs in distribution systems, these polysulfides may be reduced back to Hydrogen Sulfide . The oxidation of Hydrogen Sulfide will produce colloidal sulfur which can be removed by filtration. Side reactions will produce polysulfides, which must be dealt with in order to eliminate threshold odors in the finished water. Monscvitz and Ainsworth suggest the conversion of colloidal sulfur and the remaining polysulfides to sulfates by first adding sulfite (which forms thiosulfate).

10 And by converting the thiosulfate (S203) to sulfate by rechlorination. The reaction is very rapid. The formation of tetrathionate is not significant since it will convert to sulfate within a short time, with no contribution to any threshold odor. The sulfite ion may be added as sulfur dioxide in an aqueous solution or as sodium metabisulfite, bisulfite or sulfite. Metabisulfite has a strong, obnoxious odor. This reaction taken to completion is recognized as the typical dechlorination reaction. Above pH polysulfides do not appear to form. This is probably one reason that any lime-softened sulfur-bearing water will not produce threshold odors resulting from these compounds. 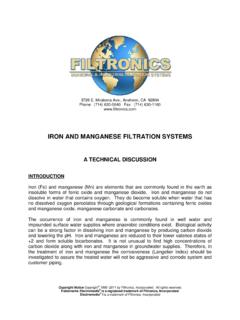 Iron in water supplies usually exists in either of the following oxidation states: a) Divalent Ferrous Iron (Fe +2) which is the soluble form of iron found in water ... 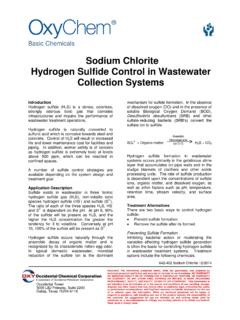 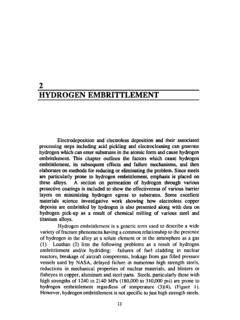 Hydrogen Embrittlement 13 the action of hydrogen as a result of sulfide corrosion. Figure 4 shows a vanadium wire that literally shattered when it was cathodically charged with hydrogen in an electrolytic cell (9). Figures 5 through 10 show the influence of hydrogen on steel (10). Figures 5 and 7 are a bar that was not cathodically treated, … 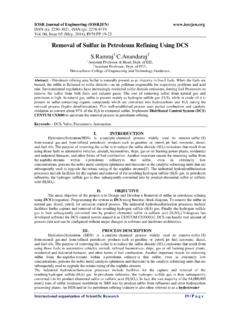 Removal of Sulfur in Petroleum Refining Using DCS International organization of Scientific Research 20 | P a g e A. BLOCK DIAGRAM The image below is a schematic depiction of the equipment and the process flow streams in a typical refinery