You cannot exclude yourself from either or both Classes by telephone or e-mail. If your request for exclusion is timely mailed and follows the above requirements, you will not be bound by any judgment in this Action.

1 Case 1:14-cv-09662-JSR Document 589 Filed 05/09/16 Page 1 of 3. UNITED STATES DISTRICT COURT. SOUTHERN DISTRICT OF NEW YORK. IN RE PETROBRAS SECURITIES LITIGATION. ' I. No. 14-CV-9662 (JSR). NOTICE OF PENDENCY OF CLASS action . --- - -- I. '-~-- \ .. ~---~,.__ ___ ,'. ~. ::_. :_:_?/ . - / / ~. d To: (1) All purchasers who, between January 22, 2010 and July 28, 2015 (the "Class Period"), inclusive, purchased or otherwise acquired the securities of Petr6 Ieo Brasileiro - Petrobras ("Petrobras"), including debt securities issued by Petrobras International Finance Company ("PifCo") and/or Petrobras Global Finance ("PGF") on the New York Stock Exchange ("NYSE") or pursuant to other domestic transactions (the "Exchange Act Class"); and (2) All purchasers who purchased or otherwise acquired debt securities issued by Petrobras, PifCo, and/or PGF, in domestic transactions, directly in, pursuant and/or traceable to a May 13, 2013 public offering registered in the United States and/or a March 10, 2014 public offering registered in the United States before Petrobras made generally available to its security holders an earnings statement covering a period of at least twelve months beginning after the effective date of the offerings (the "Securities Act Class").

2 A federal court has authorized this notice. This is not a solicitation from a lawyer. This Notice is to inform you of a class action lawsuit that is now pending in the United States District Court for the Southern District of New York (the "Court"). under the above caption (the " action ") alleging violations of Section 1O(b) of the Securities Exchange Act of 1934 and Securities and Exchange Commission Rule 1Ob-5 promulgated thereunder, as well as Section 11 of the Securities Act of 1933 (the "federal securities laws"). The suit is brought on behalf of investors for alleged violations of the federal securities laws by defendants for purportedly concealing a multi-year, multi-billion dollar bribery and kickback scheme. The defendants include Petrobras, PGF, Petrobras America Inc.

4 , Merrill Lynch Pierce Fenner & Smith Incorporated, Standard Chartered Bank, Bank of China (Hong Kong) Limited, Banco Bradesco BBi , Banca IMI , and Scotia Capital (USA) Inc. (collectively, "Defendants"). Defendants have denied the claims and maintain they are not liable for the injury alleged. YOU ARE HEREBY NOTIFIED of the pendency of the action as a class action . This Notice is directed to you because you may be a member of the Class whose rights might be affected by this action . If you are uncertain whether you are a member of the Class, contact Class Counsel listed below, or consult your own attorney. A class action is a type of lawsuit in which one or several individuals or entities prosecute claims on behalf of all members of a group of similarly-situated persons and entities to obtain monetary or other relief for the benefit of the entire group, known as a class.

5 Class actions are used to decide legal and factual issues that are common to all members of a class. By Order dated March 4, 2015, the Court appointed Universities Superannuation Scheme Limited ("USS") as Lead Plaintiff and appointed Pomerantz LLP as Lead Counsel pursuant to the Private Securities Litigation Reform Act of 1995. On February 2, 2016, the Court certified two classes - a Securities Act Class and an Exchange Act Class as defined above. The Court also appointed (i) USS as Class Representative for the Exchange Act Class, (ii) additional plaintiffs North Carolina Department of State Treasurer and Employees' Retirement System of the State of Hawaii as Class Representatives for the Securities Act Class; and (iii) Pomerantz LLP as Class Counsel.

6 Defendants deny that this is a proper class action and have sought permission to appeal the order certifying the Classes. The Court has set a trial date of September 19, 2016. For more details on the allegations and the Court's rulings, you can visit {00201804;1}. Case 1:14-cv-09662-JSR Document 589 Filed 05/09/16 Page 2 of 3. YOUR RIGHTS AS A CLASS MEMBER: If you purchased or otherwise acquired the secunties of Petrobras, including debt securities issued by PifCo and/or PGF, on the NYSE or pursuant to other transactions occurring in the United States during the Class Period, or purchased or otherwise acquired prior to August 11, 2014 debt securities issued by Petrobras, PifCo, and/or PGF, in transactions occurring in the United States, directly in, pursuant and/or traceable to a May 13, 2013 public offering registered in the United States and/or purchased or otherwise acquired prior to May 15, 2U 15 aebt securmes 1ssuea oy l'etrooras, l'IICu, anurur rut, 111 tra11:s1:11,;uu11:s u1,;1,;urn11g u1 t1J1;; u11it1;;u >:Jtm.

7 ;~, ui11,;1,;t1y iu, pursuant and/or traceable to a March 10, 2014 public offering registered in the United States, you are a member of one or both of the Classes. 1 If you choose to remain a member of one or both of the Classes, you do not need to do anything at this time. You will automatically be included in either or both Classes unless you request exclusion in accordance with the procedure set forth below. Your decision is important for the following reasons: If you choose to remain in either or both Classes, you will be bound by all orders and judgments in this action , whether favorable or unfavorable. If the Classes prevail on the common issues, or if a settlement is reached, you may be able to recover an award. If defendants prevail, you may not pursue a lawsuit on your own behalf with regard to any of the issues decided in this action .

8 Your interests are being represented by the representatives of the Classes and Class Counsel. You will not be personally responsible for attorneys' fees or costs unless you hire your own individual attorney. Class Counsel has agreed to represent the Class on a contingent fee basis, which means that it will be awarded fees and costs only if it succeeds in obtaining a recovery from one or more defendants. Any attorneys' fees will be awarded by this Court from the settlement or judgment, if any, obtained on behalf of the Classes. You may remain a member of the Classes and elect to be represented by counsel of your own choosing. If you retain separate counsel, you will be responsible for that counsel's fees and expenses and such counsel must enter an appearance on your behalf by filing a Notice of Appearance with the Court and mailing it to Class Counsel at the address set forth below on or before July 29, 2016.

9 Please note that if you exclude yourself from the Class and decide to pursue your own action individually, you may not be able to pursue certain claims due to the lapsing of the statute of limitations, including claims under Section 11. related to the May 13, 2013 offering. If you choose to be excluded from either or both Classes, you will not be bound by any judgment in this action , nor will you be eligible to share in any recovery that might be obtained in this action . Should you choose to be excluded, or in other words, opt out of the action , you may individually pursue any legal rights that you may have against any of the defendants. If you seek to share in any Class recovery, you will be required to prove your membership in either or both Classes with evidence of, among other things, (i) your purchases, acquisitions and sales of Petrobras securities (including debt securities issued by PifCo and/or PGF); (ii) that you purchased Petrobras securities in a domestic transaction and suffered resulting damages, and/or (iii) that you purchased such debt securities pursuant to or traceable to one of the registered offerings referenced above.

10 In addition, Defendants may seek to prove that you did not rely on the integrity of the market or that you had knowledge of Defendants' alleged misrepresentations or omissions. HOW TO BE EXCLUDED FROM EITHER OR BOTH CLASSES: If you fall within either or both of the Class definitions and are not otherwise excluded, you will automatically be considered a member of either or both Classes unless you request exclusion. Any member of either or both Classes may request not to be bound by these proceedings. To exclude yourself from either or both Classes, you must send a signed letter by mail stating that you "request exclusion". from either or both of the Classes in "In re Petrobras Securities Litigation, No. l 4-cv-9662." Be sure to include: (i) your name, address, and telephone numbers, (ii) the transactional details of the Petrobras securities, PifCo debt securities, and/or PGF debt securities, purchased, acquired and/or sold during the Class Periods, including purchase/sale dates, amount of shares purchased or sold, and the price of such purchases or sales; and (iii) the signature of the person or entity requesting exclusion or an authorized representative. 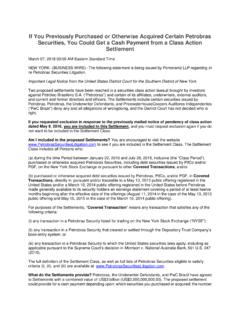 If You Previously Purchased or Otherwise Acquired …

If You Previously Purchased or Otherwise Acquired Certain Petrobras Securities, You Could Get a Cash Payment from a Class Action Settlement March 07, 2018 09:00 AM Eastern Standard Time 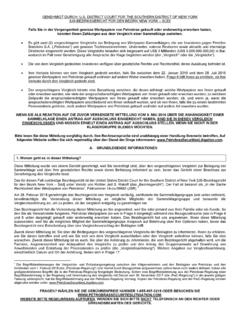 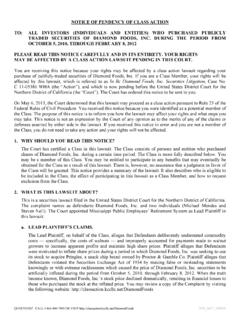 NOTICE OF PENDENCY OF CLASS ACTION TO: ALL … 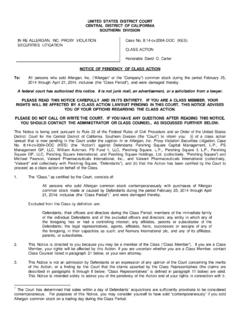 NOTICE OF PENDENCY OF CLASS ACTION To

All persons who sold Allergan, Inc. (“Allergan” or the “Company”) common stock during the period February 25, 2014 through April 21, 2014, inclusive(the “Class Period”) , and were damagedthereby. 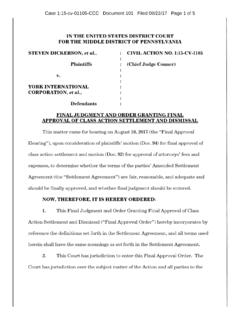 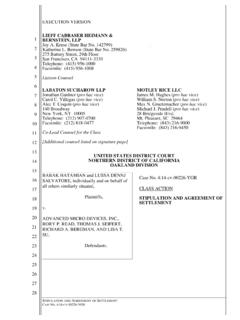 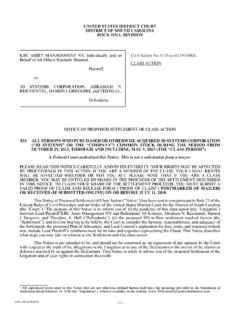