, Activities and GamesYouth leadership CampJuly 5th-7th, 2012 find us online @ BYTE YukonBYTE's Mandate:Yukon Youth unite to strengthen Youth voice, take action and bring about positive change for the well-being of of BYTE In 1998, Bringing Youth Towards Equality ( ) began to surface out of Yukon s need to have a Youth organization that is generated out of Youth ideas, plans, and initiatives. Supported by the PAYY Coalition (Positive Action with Yukon Youth ), a group of energetic Youth decided to put together the first Yukon Youth Conference. It was a success, so the group reassembled later in the spring to formally form Since day one, s been involving Youth in every step of the decision making process and has grown into a national the years, we have hired on energetic, enthusiastic Youth who have shaped and directed the organization.

1 , Activities and GamesYouth leadership CampJuly 5th-7th, 2012 find us online @ BYTE YukonBYTE's Mandate:Yukon Youth unite to strengthen Youth voice, take action and bring about positive change for the well-being of of BYTE In 1998, Bringing Youth Towards Equality ( ) began to surface out of Yukon s need to have a Youth organization that is generated out of Youth ideas, plans, and initiatives. Supported by the PAYY Coalition (Positive Action with Yukon Youth ), a group of energetic Youth decided to put together the first Yukon Youth Conference. It was a success, so the group reassembled later in the spring to formally form Since day one, s been involving Youth in every step of the decision making process and has grown into a national the years, we have hired on energetic, enthusiastic Youth who have shaped and directed the organization.

2 We have been extremely lucky to have so many talented and passionate individuals work for byte. New teams our created annually, this has enabled us to keep our work current and vibrant. Each team brings with it a new set of skills and abilities allowing us to reach out and connect with a larger number of Youth here in our Territory. BYTE uses a for Youth by Youth organizational model. We regularly poll Yukon Youth on what issues they face, want to learn more about and take action on, and then we create programming surrounding these outcomes. Our most popular program is our Community Outreach: on-call Youth created and run workshops.

3 In recent years, the staff team has created experiential lesson plans on the issues outlined by Yukon Youth to encourage healthy choices. We have recruited and trained an on-call facilitation team of over 20 Youth to offer workshops in schools, rural Youth centres and winter and summer SticksTeam members line up on either side of a tent pole or meter stick and must keep the pole up using only the side of their index fingers they must keep both fingers touching the pole at all times. The goal is to lower the pole to the ground and have both ends touch the ground at the same time.

4 This is a challenge because people instinctually move upwards, rather than downwards. You can time the group for improvement. It can sometimes take up to a half hour to figure it out. SnowblindEyes closed and armed with a bonker (a foam pool noodle), the Snowman tries to tag stationary and crouching players while they chant Snowman, snowman, all in white, blinding everyone in sight . When the Snowman stands still and responds with the same chant the players can run around and switch locations. Anyone tagged joins the Snowman train as the front person and takes the bonker and blindfold to continue the search for people while they chant.

5 The Northwind Blows everyone sitting in a big circle, with one chair for every participant, except for the person in the middle, call out a category. (Example: The northwind blows you have ever spoken in front of a group/you are wearing a sweater/been to Alaska). Anyone who has must get up and run to another seat. In the chaos one person will always be left in the middle and they come up with the next question. It is a great game to mix up the group and get people sitting next to new people. To start the game you can call out examples until the group understands the purpose of the game.

6 CommonalitiesDivide the group into small groups of 4-6. Have the group write lists of things they all have in common. Have each group share their lists of commonalities with the rest of the group after about 5 minutes. Concentric the group into two groups by counting off 1s and 2s. Arrange the group so the 1s are in the inner circle facing the 2s who are in the outer circle (so each 1 is facing a partner in the 2s group). If there is an odd number of participants a facilitator should fill in the extra the group that they will have a few minutes (shorter time for younger groups, longer time for older groups) to talk with their partner.

7 Partners should introduce themselves at the beginning of each the group a question they can the allotted time, call time and ask the inner circle to shift one seat over so they have a new partner. and repeat with new questions several times. Sample did you come to the workshop today? about a time you broke a rule and what is someone you admire as a leader? is an activity that you really like to do?Gaga BallOne person who is not a player is designated as the referee. The referee is the sole authority during play. referee begins play only after all players are standing in the gaga court (an octogan ring about thigh high) and have indicated that they are ready to start the game.

8 Player tosses the ball up in the air. Players yell "ga" on the first bounce and "ga" again on the second bounce, and the ball is then in play. hit the ball with their hands only, and may not carry or throw the ball: it must be punched with open hand or fist. the ball contacts a player or a player's clothing below the waist, that player is eliminated. the ball goes out of the gaga court, the last player to touch the ball is eliminated. a player catches the ball before it bounces, the player who had the last contact with the ball is eliminated. the player hits the ball, he or she must wait until the ball touches someone else before hitting it again (no double touches).

9 There are only two players remaining, a player may hit the ball up to 3 times in a row. The ball is "rejuvenated" by contact with the wall, and the hit count resets. , or intentional passing of the ball to other players, is allowed only at the discretion of the referee and must be specified in advance of play. Balloon Long Distance1. Give each participant a different coloured balloon. If there are more participants than colours divide them into group and give each group a colour of Have the group blow up their balloons as big as they can and hold on to them without tying a Have them line up and release their balloons, each person trying to have their balloon travel the longest distance.

10 Encourage people to try and throw them or kick them if they think it will make it go further to add more fun!4. Measure the distance to see whose has travelled the furthest. Sticky Beak1. Prepare pieces of masking tape (about 10cm) for each person. Have the participants take a piece and roll it so two ends are sticking together sticky side out. Have them stick the roll on their When you call GO participants should find someone to press their sticky beak together and pull back quickly, trying to steal the other persons tape (no hands!). The game continues until someone has all of the tape on their nose-the winner! 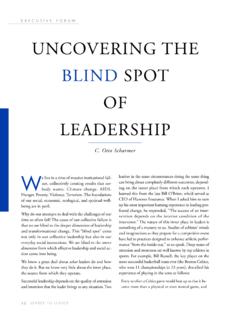 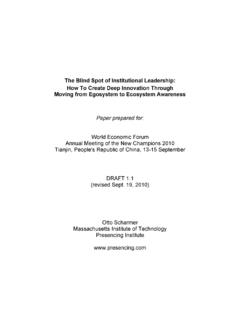 The Blind Spot of Institutional Leadership: How To …

The Blind Spot of Institutional Leadership: How To Create Deep Innovation Through Moving from Egosystem to Ecosystem Awareness Paper prepared for: 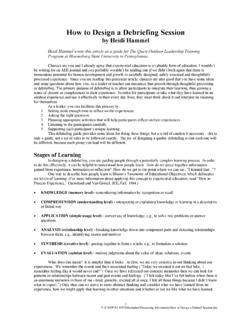 How to Design a Debrief Session - Camp High Rocks 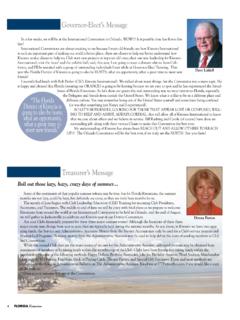 *FLORIDA Kiwanian Governor-Elect’s Message Treasurer’s Message Dave Liddell Donna Parton In a few weeks, we will be at the International Convention in Orlando.