FHCH (Now Queens Community House) Staff Development Day June 8, 2006 Identifying core Values: Background Queens Community House used several different group exercises in a one-day retreat to identify the organization s three core values. See materials below for a copy of the agenda, and exercises used. The Lifeboat Exercise served as an icebreaker to help staff consider how they identify and prioritize their own values. Facilitators asked staff to examine a list of individuals of diverse ages and backgrounds, and to then respond to the following challenge: A passenger liner leaving New York is wrecked at sea and the 17 people below find themselves together in a lifeboat.

1 FHCH (Now Queens Community House) Staff Development Day June 8, 2006 Identifying core Values: Background Queens Community House used several different group exercises in a one-day retreat to identify the organization s three core values. See materials below for a copy of the agenda, and exercises used. The Lifeboat Exercise served as an icebreaker to help staff consider how they identify and prioritize their own values. Facilitators asked staff to examine a list of individuals of diverse ages and backgrounds, and to then respond to the following challenge: A passenger liner leaving New York is wrecked at sea and the 17 people below find themselves together in a lifeboat.

2 The lifeboat, however, can only support 10 people. If seven are not eliminated, everyone will die. If you were in charge of the lifeboat, whom would you choose to survive? Following this exercise, individuals participated in a core values rating to identify personal values of a set of given core values using the lens of one s own initial response, work scenarios, and to what extent the participant thought others should share in the values. The values given were accountability, compassion, consistency, discipline, empowerment, flexibility, humor independence, productivity, and risk.

3 Each person gave a score of 0-10, with 10 being the highest score of importance to the respondent. After creating an average score for each value , the participants identified their most important personal value . In the afternoon portion of the retreat , individuals divided into small groups to identify the organization s core value with help from final decision making tools involving a round robin discussion, process of elimination and a final vote. Participants received an extended list of 20 possible core values for the organization, with space to write-in additional values. Each person was asked to choose two core values and to give separate one minute explanations of why the value should be among the organization s three core values.

4 The facilitator wrote all chosen values on newsprint. Every participant was given a sheet of red stickers and asked to choose values to eliminate. The six values with the most number of dots were eliminated. This process repeated with two other sticker colors, or, until only three values remained. These three values were brought back to the large group on butcher paper. Each person was then asked to vote on her/his top value from the 26 different values chosen by the small groups; the values with the three highest votes became the organization s three core values. --Adapted from Materials provided by Dennis Redmond, QCH FHCH (Now Queens Community House) Staff Development Day June 8, 2006 AGENDA 9:30 AM Registration & Breakfast Agenda for the day posted on large sheets inside the MPR 10:00 AM Icebreaker 10:15 AM Welcome 10:20 AM Name Change Update & Overview Where we are since last year s SDD; why these days are important to agency; why is Identifying core values important to agency operation and how will it help us to move forward?

5 10:30 AM Introduction to core Values What exactly IS a core value and why would we want to identify them? In order to help people understand what a core value is, we will present a scenario. 11:00 AM Morning Work Group Everyone will be pre-assigned to one of 12 working groups. Each group will be led through 3 exercises, intended not to identify specific values but to start the thinking process and help people to reflect: 1) The lifeboat exercise. 2) Individual exercise on values ( core value Ratings) 3) Index card exercise Before groups break to return to the MPR, the group facilitators will explain the lunchtime schedule.

7 If you were in charge of the lifeboat, whom would you choose to survive? 1. Piotr Primakov, 19, Russian citizenship with a work visa. Piotr is a recent Russian migr . He is the most physically fit of the survivors. He has no spouse or offspring. 2. Gregory Lefebvre, age 38, French-Canadian. HIV positive. Nurse. 3. Sylvia Pe a, age 60. A doctor (GP). She is addicted to drugs and very nervous. Widowed, with 7 grandchildren. 4. Louis Farleigh, An African-American Protestant minister. Age 27. A prominent pro-life (anti-abortion) leader and death penalty opponent. 5. Dennis Fox.

8 Age 43. Charged with murder; skipped bail and was on ship illegally. He was in the Navy for 12 years and seems to be the only one capable of navigating the boat. 6. John Valery, age 31. A mentally-disturbed man. He carries important government secrets in his head. A current finalist on American Idol. 7. Van Barfoot, crippled boy, paralyzed since birth. He cannot use his hands, or do anything for himself, so he must be fed by others. Age 8. His parents and 2 sisters died in the shipwreck. 8. Emma Goldfarb, age 26. A self-identified lesbian anarchist . Early Childhood Center teacher.

9 She lives with her partner, Carmen Perez. 9. Carmen Alvarez. Age 23. A housewife with 2 young children at home. Breast cancer survivor. 10. Gonggar Gyaco, age 12, Tibetan but living in exile, he is being groomed to be the next Dali Lama. 11. Angie Washington, age 55. A corporate executive for one of the largest trading companies in the world. Lifelong Detroit Red Wings fan. Big Sister volunteer for 5 years. Has diabetes, but is stable with medication. 12. Thomas Johnson, 66, African-American, citizenship. Dr. Johnson is an oncologist who works at Sloan Kettering doing research on children's cancer.

10 He has been married for two years to Helen Johnson. 13. Helen Johnson, 37, Caucasian, citizenship. Helen has worked as a medical secretary, but retired after her marriage and is now four months' pregnant with the Johnsons' first child. 14. Carolyn Wong. Age 27. A Vice-President at Victoria s Secret. Not married. Sits on the Board of Directors of several non-profit organizations, including the Forest Hills Community House. 15. Andy Cooper, 32, Caucasian, citizenship. Cooper is a state senator representing Forest Hills in Albany. While other state senators use their recesses to do nothing back in their districts, Andy is using his break to investigate illegal casinos and strip clubs sprouting up throughout the Caribbean. 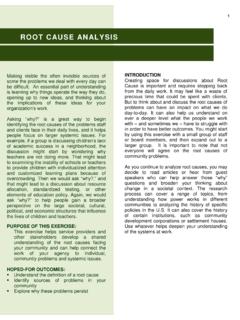 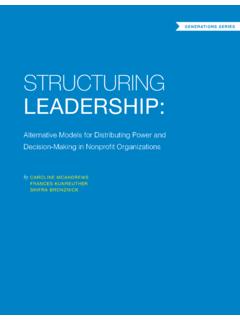 Organizational Readiness Assessment As a part of our ongoing work to integrate social change activities into our daily practice, we are striving to … 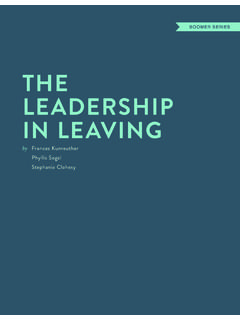 THE LEADERSHIP IN LEAVING - Building …

1 • THE LEADERSHIP IN LEAVING "I cannot imagine doing anything else as I love what I do, BUT at some point the organization will be better served by a younger 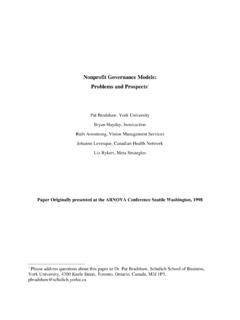 Nonprofit Governance Models: Problems and Prospects Abstract Drawing on our experiences in developing a new governance model for the Canadian Health Network, in this paper we argue that there is currently no agreement about a prescriptive 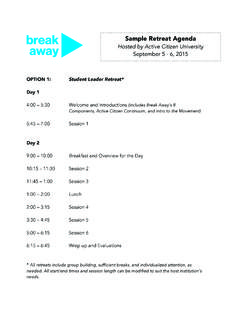 OPTION 3: Combination Retreat and Consultation* Day 1 1:00 – 2:00 Lunch with Staff and Student Leadership (opportunity for Break Away staff to hear more about the program – current successes and challenges) 2:00 – 5:00 Program Consultation (facilitated discussion of program goals for the upcoming year and strategy for retreat as kick-off/tone setter) 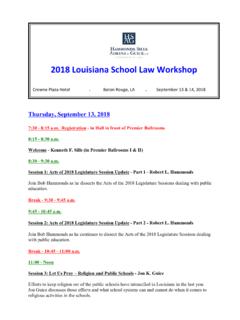 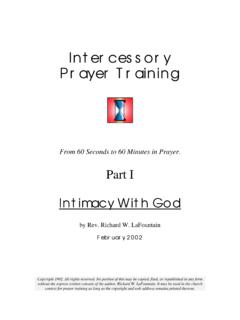