Images of the Month - New Hampshire …

Vol. 2013, No. 7 Newsletter of the New Hampshire Astronomical Society July 2013. Images of the Month On July 19, NASA urged Earthlings to wave at Saturn from 5:27pm EDT as Cassini imaged the Earth-Moon system from about 900 million miles away (this had been done before, shown above left). That same day , another view of planet Earth was captured from the vicinity of the innermost planet Mercury. MESSENGER took an overexposed image in which the Earth and the Moon not only shone in bright sunlight, but were properly resolved! A much closer look at the duo is thanks to the venerable Voyager 1 soon after its launch (see page 3). (Credits: NASA/ESA/JPL/Cassini Imaging Team & JHUAPL). Inside this Issue.

Sky Watch Review 3 YMCA of Greater Nashua Solar Observing, Merrimack NH, July 17 We had clear skies (for a change!) for this event. There were about 60

1 Vol. 2013, No. 7 Newsletter of the New Hampshire Astronomical Society July 2013. Images of the Month On July 19, NASA urged Earthlings to wave at Saturn from 5:27pm EDT as Cassini imaged the Earth-Moon system from about 900 million miles away (this had been done before, shown above left). That same day , another view of planet Earth was captured from the vicinity of the innermost planet Mercury. MESSENGER took an overexposed image in which the Earth and the Moon not only shone in bright sunlight, but were properly resolved! A much closer look at the duo is thanks to the venerable Voyager 1 soon after its launch (see page 3). (Credits: NASA/ESA/JPL/Cassini Imaging Team & JHUAPL). Inside this Issue.

2 2 President's Message 4 The Regular Items 3 Sky Watch review Business Meeting Report Treasurer's Report YMCA of Greater Nashua Solar Observing Contact Information Weare Public Library Upcoming Events North Hampton Public Library Credits 2 President's Message We had a great first half of the year contribute. People might think that they do not have with the delivery of several out-reach value to add, but every little bit helps and matters. programs, and more importantly, There will be more about this in the near future. several In Reach efforts in line with our plan for the year. I wish to thank Regarding the portable planetarium proposal, EOC has everyone who participated with developed a strategy much like the way we started off particular emphasis on the In Reach with the Library Telescope Program (LTP).

3 This efforts. Some examples are: process allows us to effectively address the potential cost of ownership to NHAS. EOC has chosen to invest Astronomer is In sessions $ to get things started. Let me emphasize that Revamped Messier Marathon the real challenge here is not funding but non-monetary Astrophotography workshops issues involving the cost of ownership to NHAS. It will Benedictine Park Events require commitment from a number of members in Revamped Coffee House Nights order to make this a reality. The Officers will meet on July 27th with this as the first item on the agenda. Regarding the Coffee House Nights, unfortunately the weather did not cooperate much but they may change in You may have recently noticed some increased usage the second half of the year.

4 We will continue to look for of our Facebook page. That is because the officers, using this as a forum for enablement for the club. On the board, and committee chairs now all have access to web conferencing front, I have a free solution available to make postings. This way we can further serve the use and thanks to the efforts of some members, several public and our membership. If you have not already options now for audio capability. I now feel that we can done so, please like our page located at: roll-out a first cut solution in Q3. Once complete, that will allow us to conduct more frequent enablement activities for our membership. We also plan to start posting pictures to FB of various We have had a good mix of both outside and inside events.

5 Before implementing this, we will send speakers for our business meetings. I have only the correspondence to the membership allowing September and October slots to fill for the remainder of individuals to opt out. NHAS will maintain this list to 2013. I'll be looking to 2014 soon after. comply with any membership privacy concerns. The membership package will also be updated so that new Stellafane is approaching (August 8th 11th) and this year, members will be able to opt-out. I need your help. Our long time coordinator Joel Harris has a conflict and will be unable to attend. I am asking In closing, I wish to thank the membership for all of for a volunteer to transport our tent. In addition, we need your support, passion, and enthusiasm.

6 We had a great someone who is willing to organize the annual cook-out first half of the year and there is a lot to look forward to on Saturday the 10th. This involves shopping and bringing the second half of the year. I am proud to be your a grill for the cook-out. Joel can answer some questions president and honored to be a part of this wonderful if needed to help in the planning. Larry Lopez also is organization. very familiar with the process. Clear Skies, The New England Fall Astronomy Festival (NEFAF) is not very far away in September. NHAS has a huge role in this event, so look for messages for the ways to Rich DeMidio NHAS President Sky Watch review 3. YMCA of Greater Nashua The parking lot lights were switched Gardner managed to align on Solar Observing, off before we observed with about 50 Arcturus and get his Gemini go-to members of the public.

7 Also in the system to find and track Saturn for Merrimack NH, July 17 mix was a reporter from the Concord him, although it wasn't visible Monitor, Sarah Palermo, with a naked-eye. I couldn't track it. We had clear skies (for a change!) for photographer. We may see them this event. There were about 60 again on First Fridays at MSDC. I didn't bother to set up the 14". children present, equally divided reflector. I went with the 85mm between the grades 1-3 and grades 4- Gardner Gerry TeleVue refractor instead. Very 6 age groups, all very patient and disappointing I was only able to well-behaved. Pete Smith set up his [Gardner and Paul made the front show Arcturus and Vega, with 8" dob for white-light solar observing page of the Concord Monitor of Epsilon Lyrae in the same field of and I set up a Coronado PST to give August 5.]

8 An inside page featured an view (skies were not clear enough the H-alpha view. We had a very excellent article by Sarah Palermo. to try to split the double-double). good time! Ed.]. Everyone was gone by the time Paul Winalski skies started to clear up enough to North Hampton Public show anything else (like Mizar). Weare Public Library, Library, North Hampton, NH, Still, people got to marvel at July 31 Saturn's rings. It wasn't a complete Weare NH, July 29 loss, and I made a point of telling Sky conditions looked iffy, but given everyone that they could check out On only the second decent night of a of the library a telescope with thoroughly miserable July, we that we had had only one successful night-time sky watch in a Month , we views equal, if not better than, the managed to hold a skywatch!

9 NHAS ones I was showing. I hope the members John Bishop, Pete Smith, decided to call this one a GO. Ted Blank gave the indoor presentation. North Hampton Library has us Steve Rand, Stu May, Paul Winalski back again in the fall, when the and I showed off the summer night Ted, Gardner, and I were there for the sky watch proper. It was almost skies are clearer. sky behind Weare Middle School. completely overcast. Paul Winalski Earth and Moon (continued). On September 18, 1977, from a distance of million miles, Voyager 1 turned its camera back on Earth and took 3 Images . These were combined into a single view of the Earth and the Moon (far left), the very first time both bodies had been pictured together.

10 Fifteen years on, in December 1992, Galileo captured the duo in one shot from million miles during a flyby (left). In February1990, Voyager 1 was once again commissioned to take a look back, this time at the whole solar system. From billion miles away at its vantage point Looks Back by Voyager and Galileo. (Credit for both Images : NASA/JPL) above' the ecliptic, it shot 60 frames in the next 4 months. From 640,000 pixels' worth of image data beamed slowly back to Earth, a mosaic of six planets was constructed Mercury and Mars were lost to the glare of the Sun, and Pluto was much too faint to be image . In this portrait, Earth shows up as a Pale Blue Dot, not even a pixel in size (more like pixel). 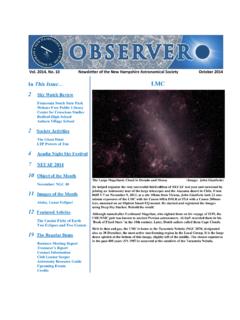 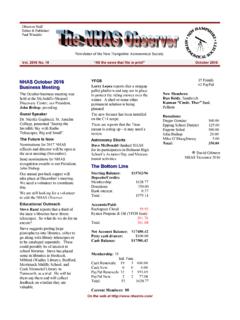 DEADLINE November 2016 Issue: 5 December 2016 E-mail articles to the Editor. CHANGE OF ADDRESS – Notify the Treasurer of changes to postal or e-mail address. How to Join N.H.A.S. 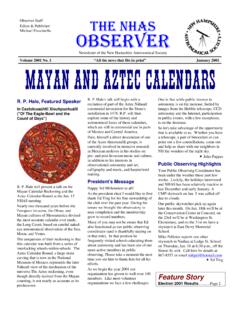 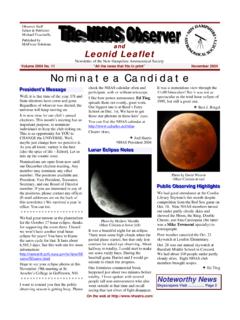 November 2004 The NHAS Observer 3 Far Out, from p. 2 Description: Easily found at 20x. Elongated core condensation, and a hint of halo were observable at this magnification, but no 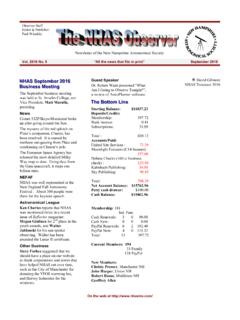 DEADLINE October 2016 Issue: 5 November 2016 E-mail articles to the Editor. CHANGE OF ADDRESS – Notify the Treasurer of changes to postal or e-mail address. How to Join N.H.A.S. Write to us: Send E-mail to: NHAS info@nhastro.com