Immigrants 1870-1920 . In the years since Europeans first settled North America, about 90 million Immigrants have arrived the largest migration of people in all human history. Some have come to the United States for religious or political reasons, but most have come to work, or to escape problems elsewhere. For example, many Irish people came because of a famine beginning in 1845, caused by a fungus that ruined potatoes. Until recent years, the greatest period of immigration was from 1870 to 1920. That period provides much data for the study of cultural interaction. In This unit, you'll focus on that period and investigate the question: How were Immigrants to the United States affected by interaction with American culture?

Page 6 Immigrants, 1870-1920 The millions of immigrants pouring into the United States raised the issue of restriction. In 1881 a Bostonian, Hamilton Andrews Hill, took this position at a conference on

1 Immigrants 1870-1920 . In the years since Europeans first settled North America, about 90 million Immigrants have arrived the largest migration of people in all human history. Some have come to the United States for religious or political reasons, but most have come to work, or to escape problems elsewhere. For example, many Irish people came because of a famine beginning in 1845, caused by a fungus that ruined potatoes. Until recent years, the greatest period of immigration was from 1870 to 1920. That period provides much data for the study of cultural interaction. In This unit, you'll focus on that period and investigate the question: How were Immigrants to the United States affected by interaction with American culture?

2 Original material copyright 2013 by Marion Brady and Howard Brady. This material may be copied and printed by teachers and mentors for use with their own students only. All other rights reserved. Immigrants , 1870-1920 Page 1. Investigation: Immigrant Demographics Select and graph some of the statistics from the table below. Identify the peak periods of immigration from each region. Identify changes in immigration patterns over the period covered by the table. In which period was the impact of immigration likely to have been greatest on American society? Why? Immigration 1820 - 1970. Northern Eastern Southern The Europe Europe Europe Asia Americas Africa 1821-1830 118,000 40 3,000 10 11,000 20.

5 In Italy I live in small town six, seven thousand. It take not much money to live. We pay the rent once a year, only little money. We have fine garden, we live healthy, happy. I. obey my mother's word, which is like the God. The people in my town, they are serious, human, good heart. We give everything to the poor. When stranger comes to us, he got always the first chair; we make all we could for him. The stranger can stay a year; he needs no money to pay for anything. We work little bit, then we take the leisure. We love very much the music, art, poetry. We love the poetical life poetry today, and tomorrow we take what's coming with the good patience. The way I mean is not only to read the books of the great poets of Dante that we love more than a father, or Petrarca but the poetry of the beautiful scenery in the country, the poetry of the music, the poetry of the friendship.

6 Even in the small town we have band and orchestra. November 11, 1902. Dearest Parents, Please do not be angry with me for what I shall write. I write you that it is hard to live alone, so please find some girl for me. Be sure she is an honest one, for in America there is not even one single honest Polish girl. **. December 21, 1902. Dearest Parents, I thank you kindly for your letter, for it was happy. As to the girl, although I don't know her, a friend of mine who does says that she is stately and pretty. I believe him, as well as you, my parents. Please tell me which of the sisters is to come, the older or the younger one, Aleksandra or Stanislawa. (Continued). Immigrants , 1870-1920 Page 3.

7 This statement was made at a Russian conference in 1905: The people believe that it is the Tsar's responsibility to govern them, and that he has no need of advice from the people. They believe that the Tsar thinks about them all the time, not even sleeping at night out of concern for them. They believe the Tsar should govern alone, for that is not only his right, it is his heavy burden to bear. Occasionally in the past the Tsar has asked the people's advice, but when he has the people have said, This is what we think, but do what you believe is best.. I am a son of a Polish peasant farmer. Until ten years of age I did not know the alphabet, or, exactly speaking, I knew only the letter B.

8 Father did not send me to school. He was always repeating: We have grown old, and we can't read nor write, and we live;. so you, my children, will also live without knowledge.. I said to my father that I wanted to learn from a book. And father scolded me, And who will peel potatoes in the winter, and pasture the geese in summer? I cried. Once, while peeling potatoes, I escaped from my father and went to an old man who knew not only how to read, but how to write well. I asked him to show me letters in the printer, and he did not refuse. I went home and thought: It is bad! Father will probably give me a licking. And so it was. Father showered a few strokes on me and said: Don't you know that, as old people say, he who knows written stuff casts himself into hell?

9 But I used to steal out to learn more and more frequently. For the peasant, arson is a way of getting even, and does not bring dishonor in the eyes of one's neighbors. A peasant whom my father scolded for having set fire to his neighbor's buildings said, I have set fire to his barn, but he could have and still can set fire to mine. I have listened to the stories of many perfectly respectable farmers who tried to set fire to their enemies' farm buildings. From the previous data choose several ideas, attitudes, or values you think differed from those of most Americans in the period from 1870 to 1920. 1. Describe a problem situation which might have been caused by these differences.

10 2. If you've completed Part 10 of Investigating American History, identify groups ( Immigrants and others) which may have experienced lowered autonomy, possible causes, and possible responses they may have to their situations. Page 4 Immigrants , 1870-1920 . The figures on the following chart come from 1870 immigration records, when 387,203. Immigrants entered the United States. About half gave inspectors some information about the jobs they had held in their homelands. Based on this data, what general statements can you make about the kinds of work these Immigrants were prepared to do in America? Where would different kinds of workers be likely to go to live in America? (Note that many of those in the occupation not stated category were women and children.) 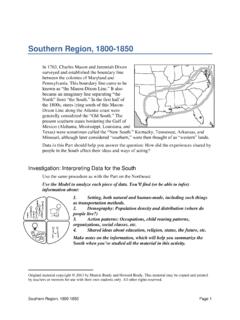 Page 2 Southern Region, 1800-1850 Robert Russell, an English gentleman and writer for the London Times, traveled throughout the South in … 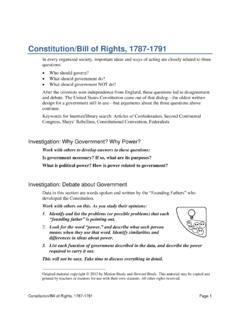 Page 4 Constitution/Bill of Rights, 1787-1791 The view of several representatives from Massachusetts: The data that follow are words from debates at the Convention. 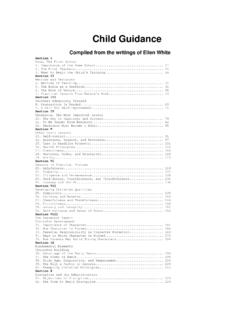 will of God. A hand is raised, and the words are spoken, "You have neglected home duties. You have failed to do the work that would have fitted the soul for a home in heaven. 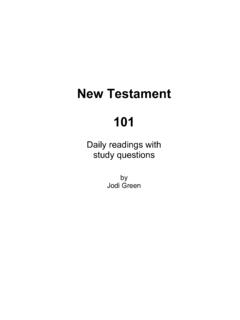 How to use this book New Testament 101 is a complete one year study through the New Testament and is suitable for all ages from middle school through adults. 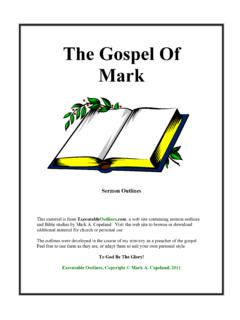 The Gospel Of Mark - Executable Outlines

Mark A. Copeland Sermons From The Gospel Of Mark 6 1. It opens with “The beginning of the gospel of Jesus Christ...” - Mk 1:1 2. It closes with “Go into all the world and preach the gospel to every creature” - Mk 16:15 CONCLUSION