Impact of diversity and inclusion within organisations

2 1. Overview The available evidence on the impact of diversity on individual/team/organisational effectiveness in organisations is inconclusive and mixed as to its beneficial and negative outcomes.

2 Helpdesk reports are not rigorous or systematic reviews; they are intended to provide an introduction to the most important evidence related to a research question. They draw on a rapid desk- based review of published literature and consultation with subject specialists. Helpdesk reports are commissioned by the UK Department for International Development and other Government departments, but the views and opinions expressed do not necessarily reflect those of DFID, the UK Government, K4D or any other contributing organisation. For further information, please contact 1.

3 Overview The available evidence on the Impact of diversity on individual/ team /organisational effectiveness in organisations is inconclusive and mixed as to its beneficial and negative outcomes. The majority of the literature seems to focus on private firms; who have reaped business benefits from equality and diversity , but not all firms, in all contexts, at all times. Knowledge about how, when, and why diversity and diversity management affects effective performance and organisational outcomes is limited. The report aimed to focus on diversity1 in terms of protected characteristics' defined in the Equality Act 2010, including: age, disability, gender reassignment, marriage and civil partnership, pregnancy and maternity, race, religion or belief, sex and sexual orientation.

4 Much of the available literature seems to focus on gender and race/ethnicity rather than the other protected characteristics. A number of meta-analyses and systematic reviews have been carried out of the literature. They provide a number of observations about the evidence. It is difficult to define and measure diversity in a consistent way across organisations and to measure meaningful business outcomes that demonstrate a business case (Wright et al, 2014, p. iv). The systematic review carried out by Urwin et al (2013, p. 15, 19) finds that the evidence on workplace diversity impacts is predominantly qualitative' and/or of a case study nature.

5 Evidence from case studies finds conflicting evidence of systematic business impacts of diversity from workplace studies'. (Urwin et al, 2013, p. 19). There is quite a lot of anecdotal evidence of the benefits of diversity but scant tangible evidence available (Wright et al, 2014, p. 60; Urwin et al, 2013). Much of the available evidence is related to correlation, but not much evidence looks at causation (Urwin et al, 2013). Eagly (2016, p. 208) argues that awareness of the inconsistencies in the research literature is needed to foster the challenging and important task of uncovering the conditions under which demographic diversity has positive or negative effects'.

7 Negative outcomes of diversity are found to include: more absenteeism, weaker employee attachment, more conflict, poorer in-role and extra-role performance, and more discrimination, leading to higher costs and losses for the organisation. The conditions in which diverse teams operate Impact on their performance. These include understanding and communication within the team ; leadership, societal/cultural attitudes; and the amount of time teams have worked together. 1 There has been a struggle to clearly define diversity as the term can be used to describe a large number of differences between people, including surface-level diversity (demographic difference) and deep-level diversity (differences in attitudes and beliefs), as well as differences in knowledge and skills and personality differences, amongst others (Urwin et al, 2013, p.)

8 6). 2. The development of a diversity mindset/climate for inclusion are important for the positive effects of diversity , such as organisational commitment, intentions to stay or leave, satisfaction, engagement, trust in management, and firm effectiveness, to appear. Not promoting diversity and inclusion and allowing discrimination and bias to persist, can lead to lower organisational commitment, lower job satisfaction, higher work tension, absenteeism, high labour turnover, loss of talented employees, tribunals and the associated bad publicity. diversity management is important in determining if diversity will bring benefits.

9 Although there is no single approach which organisations can adopt to ensure diversity is beneficial. 2. Impact of diversity and inclusion The business case for diversity is sometimes seen as distinct from the legal and moral case as it involves factors which can improve the economic performance and competiveness of firms (Urwin et al, 2013, p. vii). The business case is often referred to in terms of managing diversity , while the moral case is often expressed in terms of Equal Opportunities, although they are hard to fully separate as equal opportunities legislation shapes the way in which diversity is managed (Urwin et al, 2013, p.)

10 2). There are some arguments that the moral case is part of the business case (Wright et al, 2014, p. iv). In addition, research finds that the discourse on diversity has moved away from equal opportunities', and is now associated with inclusiveness, with recognising, valuing and respecting differences' (Wright et al, 2014, p. iv). Evidence on the Impact of diversity and inclusion The evidence on the impacts of diversity and inclusion appears to be mixed and inconclusive. The evidence arises out of a fragmented literature where different conceptual frameworks, methods, and measures have been used, and where there are substantial methodological challenges', which explain some of the variety in findings (Urwin et al, 2013, p. 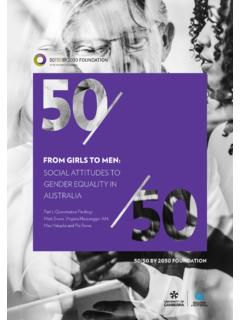 5. FIGURES Figure 1. Social attitudes to gender inequality in Australia since 2009. Figure 2. Australian perspectives on gender equality Figure 3. Which areas of society are perceived to be the most sexist – Australia and Europe compared 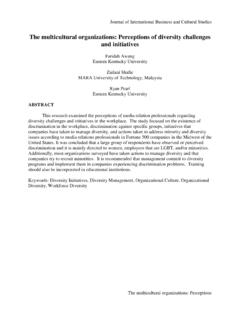 The multicultural organizations: Perceptions of … 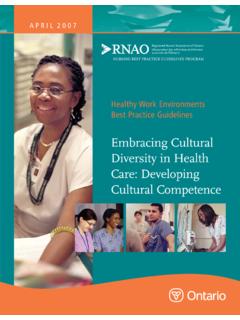 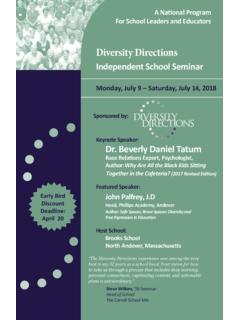 A National Program For School Leadersand Educators “Our team came to Diversity Directions knowing elements of diversity and inclusion, but the Seminar gave us a … 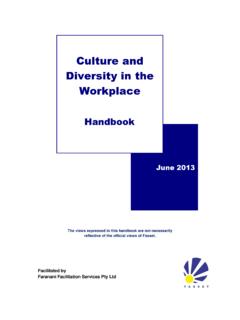 Culture and Diversity in the Workplace - Fasset

Workplace, Culture, Diversity, Culture and diversity in the workplace

What is Cultural Awareness - Culturosity

1 © Culturosity.com 2005 Where Growing Minds Go Global… What is Cultural Awareness, anyway? How do I build it? “A fish only discovers its need for water when it … 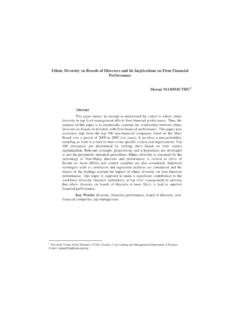 Ethnic Diversity on Boards of Directors and Its ...

Introduction Celebrating Appreciate Diversity Monthcan be done individually or in a group, quietly or with great fanfare, with spontaneity or detailed planning.