Impact of Maternal and Child Health on Economic …

4 | P a g e the rough magnitude of the effects involved. 1 However, because of restrictions in data availability we are not able to include other related factors in …

2 References Page 29. 2|P ag e Executive Summary Background The Health of women, mothers and children is fundamental to development, as reflected in Millennium Development Goals (MDGs) 4 (reducing Child mortality) and 5 (improving Maternal Health and achieving universal access to reproductive Health ). Significant additional investments are needed to achieve MDGs 4 and 5 and to improve women's and children's Health beyond the MDG target date of 2015. Demonstrating the broader societal returns of investment in women's and children's Health can be a critical tool in mobilizing additional resources. Economic arguments may resonate particularly well with certain stakeholders who influence investment decisions, such as Ministries of Finance, parliamentarians, bilateral and multilateral donors, and global and regional development banks. To support global, regional and national advocacy for increasing resources, demand has been expressed by members of the Partnership of Maternal , Newborn & Child Health (PMNCH) and the broader reproductive, Maternal , newborn and Child Health (RMNCH) community for the synthesis, and if necessary, the generation of evidence on the Economic benefits of investing in RMNCH.

3 To achieve this, a work program has been established under the auspices of PMNCH. The work program includes a systematic literature review, an econometric study of the relationship between RMNCH outcomes and Economic growth, the development of a framework/model for estimating the national Economic returns of investment in RMNCH, and technical consultations. Objectives The objectives of this study are: (i) to examine whether there are relationships between Maternal and Child Health outcomes and Economic growth in different countries at different income levels, and, given such relationships, (ii) to estimate the direction and magnitude of these relationships. Methods As measures of Maternal and Child Health , we use the under-five mortality rate (the number of deaths of children under five per 1,000 live births) and the Maternal mortality ratio (the number of deaths per 100,000 live births). data on mortality in 1990-2010 is taken from the WHO global data repository ( ) including 180 countries for under-five mortality and 170 countries for Maternal mortality.

4 As a measure of Economic growth we use per capita Gross Domestic Product (GDP) in 1990-2010in 2000 US$ from the World Bank's World Development Indicators 2012: To examine whether there are relationships between Maternal and Child mortality and Economic growth we use international country-level panel data and Granger causality analysis to identify the direction of the relationships between GDP and Maternal and Child mortality and to estimate 3|P ag e the rough magnitude of the effects involved. 1 However, because of restrictions in data availability we are not able to include other related factors in the Granger causality analysis. To improve the estimate of the effect of reductions in Child mortality on GDP, by taking into account other growth related factors, we follow one of the most influential growth models in economics proposed by Barro (1990)2 in combination with data Envelopment Analysis (DEA). 3. Using DEA and the Barro model, we estimate how much a decrease in Child mortality may increase GDP for each country.

6 No relationships are found in 33 countries (19%). We also find that the magnitude of the effect of reductions in Child mortality on GDP in high- income countries (HICs) and upper middle-income countries (UMICs) is larger than lower- 1. Granger, (1969) Investigating causal relations by econometric models and cross-spectral methods. Econometrica 37, 424 38. 2. Barro, (1990) Government spending in a simple model of endogenous growth. Journal of Political Economy 98, 103 125. 3. We use an explicit endogenous growth model (Barro, 1990), in which public expenditure is considered as an input of the production function. For y the GDP per unit of labor, we have: y = f(k, d) with k, the private capital by unit of labor, and d, a productive public expenditure , see Ventelou, B. & Bry, X. (2006) The role of public spending on Economic growth: Envelopment methods. Journal of Policy Modeling 28, 403 413. 4. In calculating DEA, we made Child mortality as the index of Child Health because of having higher significant causal relationship with GDP instead of Maternal mortality.

7 5. A bi-directional relationship (H Y) implies that variation of H (Y) causes variation of Y (H). A unidirectional relationship from, for example, H to Y (H Y) means that variation of H has a significant effect on Y, but the variation of Y has no effect on H. 4|P ag e middle-income countries (LMICs) and low-income countries (LICs). However, in contrast, the magnitude of the effect of GDP on Maternal and Child Health outcomes in LMICs and LICs are larger relative to HICs and UMICs. B. Barro growth model / DEA analysis of magnitude To explore the effects of other growth-related factors in the model, we used DEA analysis in a Barro framework where in addition to Child Health we included government spending, population and (fixed) capital in the model, in order to determine the efficiency rate. The efficiency rate for each country demonstrates the magnitude of the Impact of Child Health outcomes on GDP. In Cote d'Ivoire the efficiency rate is in 2001 to 2010. This may be interpreted as follows: if Child Health increases by one percentage (one percentage point reduction in the under-five mortality rate), increases GDP by 5% (as an example) in a country with a 100% efficiency rate, then GDP in Cote d'Ivoire will increase by ( *5%).

10 Human capital is the stock of competencies, knowledge, social and personality attributes, including creativity, embodied in the ability to perform labor so as to produce Economic value. 6 The higher human capital level of richer countries compared to poorer countries implies that an equal reduction in Maternal and Child mortality will cause GDP to increase more in richer countries than in poorer countries. 6. Simkovic, M. (2012) Risk-based student leons. Whasington and lee law review 70, 1. 6|P ag e 1. Introduction Background Reproductive, Maternal , newborn & Child Health (RMNCH) is fundamental to development, which is reflected in Millennium Development Goals (MDGs) 4 (reducing Child mortality) and 5. (improving Maternal Health and achieving universal access to reproductive Health ). It has been demonstrated that significant additional investments are needed to achieve MDGs 4 and 5 and improve women's and children's Health beyond the MDG target date of 2015. ( ). Developing and presenting Economic arguments that resonate with stakeholders influence investment decisions, such as Ministries of Finance and Planning, which are critical to mobilize additional resources. 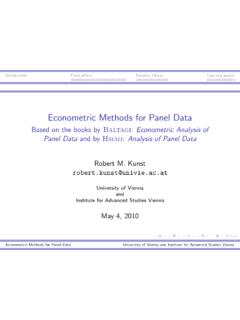 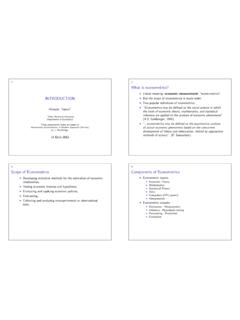 2 What is econometrics? - Yıldız Teknik Üniversitesi

5 Why Do We Need Econometrics? I We learned statistical methods so why do we need a separate discipline? I The reason is as follows: econometrics focuses on the analysis of nonexperimental economic data. I Nonexperimental data (or observational data) are not obtained through controlled experiments on economic agents … 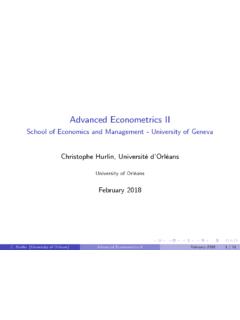 Introduction Econometrics is fundamentally based on four elements: 1 A sample of data 2 An econometric model 3 An estimation method 4 Some inference methods C. Hurlin (University of OrlØans) Advanced Econometrics II February 2018 3 / 61 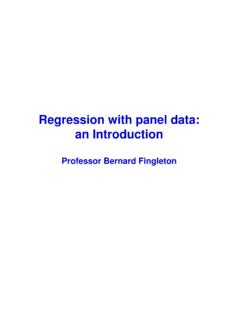 • With observations that span . both . time and individuals in a cross-section, more information is available, giving more efficient estimates. • The use of panel data allows empirical tests of a 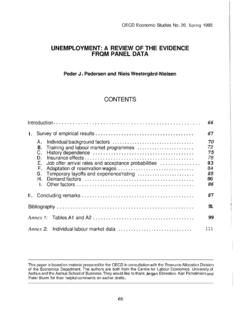 UNEMPLOYMENT: A REVIEW OF THE EVIDENCE … 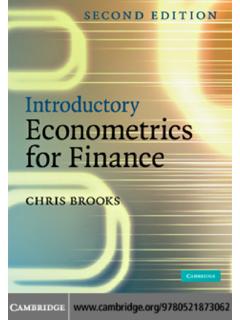