Improving Regenerative Energy Receptivity in Metro Transit Systems Coordinated Train Control Algorithm Haichuan Tang, C. Tyler Dick, and Xiaoyun Feng Algorithms for current automatic train operation (ATO) focus mainly Many researchers have dealt with timetable optimization. In such a on reducing the mechanical Energy of motion for a single train within problem, dwell time, interstation running time, and service frequency an existing timetable. However, the reuse of Regenerative Energy is another are the principal factors for Energy efficient timetable design. Some factor that contributes to Energy consumption and conservation in multi studies have adjusted dwell time by delaying the departure of trains train networks. To improve Regenerative Energy Receptivity and Energy to synchronize acceleration and braking events. Applied control savings in a bidirectional Metro transit network, this study formulated a methods include predictive fuzzy control, search techniques, and coordinated train control algorithm that was based on genetic algorithm heuristics (2 4).

1 Improving Regenerative Energy Receptivity in Metro Transit Systems Coordinated Train Control Algorithm Haichuan Tang, C. Tyler Dick, and Xiaoyun Feng Algorithms for current automatic train operation (ATO) focus mainly Many researchers have dealt with timetable optimization. In such a on reducing the mechanical Energy of motion for a single train within problem, dwell time, interstation running time, and service frequency an existing timetable. However, the reuse of Regenerative Energy is another are the principal factors for Energy efficient timetable design. Some factor that contributes to Energy consumption and conservation in multi studies have adjusted dwell time by delaying the departure of trains train networks. To improve Regenerative Energy Receptivity and Energy to synchronize acceleration and braking events. Applied control savings in a bidirectional Metro transit network, this study formulated a methods include predictive fuzzy control, search techniques, and coordinated train control algorithm that was based on genetic algorithm heuristics (2 4).

2 Evolutionary methods (such as genetic algorithms). techniques. The Energy saving potential of different station departure have also been used to investigate the influence of running time on time intervals between two opposing trains (synchronization time) was operating cost (5). Service frequency and dwell time are also regarded tested. Simulation on the Visual C platform demonstrated that the as influential parameters to be optimized (6). But the application of algorithm could provide an optimal train speed profile with better Energy Energy efficient timetables is limited, as service quality is negatively performance while also satisfying operational constraints. different syn affected as a result. chronization times have different optimization ratios. This research was Another alternative to improve Regenerative synchronization is another step to facilitate the development of an ATO control algorithm to adjust train speed profiles through the use of an optimized ATO.

3 That considers overall Energy consumption. Increased knowledge of the algorithm within a predefined timetable, so that service quality can influence of synchronization time at stations on Energy consumption be maintained. ATO systems are used to generate optimal driving in Regenerative multitrain networks will also aid in the design of more commands for train speed regulation. Traditional ATO algorithms Energy -efficient timetables. are generally designed to reduce the mechanical Energy consump- tion of single-train operation by altering its train speed profile while still satisfying operational constraints. Through the latest train Regenerative braking is a braking mechanism that decelerates the control technologies, such as communications-based train control vehicle by converting its kinetic Energy into electric Energy . Regen- (CBTC) systems, a train could be aware of the projected speed pro- erative braking has been widely applied on electric trains, particularly files of other trains in the same power section before leaving its in Metro transit systems.

4 Compared with trains with only pneumatic station (7). Accordingly, power flow could be predicted in real-time, braking, studies show that the use of Regenerative braking on Metro allowing for the design of coordinated train control algorithms for trains can provide Energy savings of 10% to 45%, depending on sys- ATO systems where acceleration and braking are synchronized with tem characteristics (1). In addition to saving Energy , Regenerative other trains in the same power section. braking also helps mitigate voltage fluctuation when multiple trains accelerate simultaneously during peak hours. Traditional ATO algorithms can be achieved with analytical For maximization of the use of Regenerative braking Energy , syn- methods (8, 9) and numerical methods (10 12). On the basis of chronization of acceleration and braking among multiple trains is a these methods, recent research has proved the optimality of regener- key issue because Regenerative Energy can only be reused when there ative Receptivity through train speed coordination in single-direction are power requirements in the same power section.

5 For instance, if one operation; the gradient method and sequential quadratic program- train accelerates while the other train brakes in the same power sec- ming have been introduced (13 15). However, for most urban tran- tion, this acceleration can take advantage of the Regenerative braking sit systems, the bidirectional application of coordinated control Energy . The total Energy cost at substations is consequently reduced. algorithms should also be studied. In addition, for this large-scale, Two alternatives are currently used to improve system Regenerative nonlinear problem, a global optimization method should be applied Receptivity : the use of an Energy efficient timetable and optimization to ensure the effectiveness of the solution. of an automatic train operation (ATO) algorithm. With the dual objectives of maintaining schedule requirements and optimizing Energy efficiency, this study examined the prospects for recovering and reusing Energy from Regenerative brakes under transit H.

7 For demonstration of an application of 48. Tang, Dick, and Feng 49. the optimization framework, Energy optimization potentials of transit coordinate its speed profile with those of other trains, power peaks systems with different synchronization times were compared. can be reduced by absorbing Regenerative braking energies. Architecture of the CBTC System Model Description The coordinated train control model presented in this paper is based Assumptions on CBTC systems. Conventional train control systems are not a suitable platform for The model presented in this paper relies on several key assumptions: coordinated driving strategy design, because of the limitations of track circuit communication. For example, the precision of train loca- A CBTC-based ATO subsystem is used for model analysis. tion determination largely depends on the length of the track circuit.

8 The electrical network is based on direct current (DC) power And only a small quantity of operational information (speed, signal supply from substations and no inductive resistance is considered. aspect, etc.) can be transmitted to onboard systems through track cir- Two opposing trains (one eastbound and one westbound) are cuits. Those limitations make it difficult for train control systems to running in the same power section. estimate electrical parameters in the network and generate the optimal The speed and position of the earlier-departing train (east- control strategy. bound) are known. Unlike track circuit based communication, CBTC is a train con- Traction Energy is provided by power substations at both ends trol system that improves safety, efficiency, and traffic management of the power section. by making use of bidirectional train-to-wayside data communica- Resistance in the catenary is evenly distributed.

9 Tion. The system provides more information for train operation and Substations are nonreversible. No wayside Energy storage has been widely applied to light rail, heavy rail, and commuter rail devices are included in this problem. systems in many countries. A typical CBTC system architecture is shown in Figure 1 (16). In the CBTC architecture, the automatic train supervision (ATS) Electrical Network Model system fills the role of the control center, which is dedicated to train and schedule adherence. For trains in the network, the ATO system The electrical network model varies according to the current loca- provides speed regulation and other functions. Automatic train pro- tion and status of the two trains within the same power section. As tection (ATP) prevents trains from collisions or going over speed. shown in Figure 2, two trains (Udc1 and Udc2) are running between Train control and status information are exchanged with other sub two substations (Ud0).

10 Systems and trains through the data communication network to ensure The model follows the common practice in rapid transit systems the proper functionality of CBTC. where three-phase alternating current electricity from the general The coordinated train control algorithm proposed by this study power supply is converted into DC electricity at a substation that was designed for the ATO module. Because of the lack of opera- feeds train operation via the catenary (17, 18). In this model, the tional information from neighboring trains, traditional ATO algo- current conversion at the substation is not considered. Thus, the sub . rithms regulate the train speed profile to reduce mechanical Energy station can be described by its external voltage-current characteris- consumption from a single train's perspective. However, for CBTC- tics as a Thevenin equivalent voltage source Ud0. 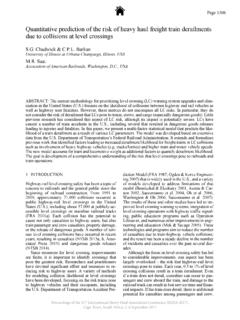 Quantitative prediction of the risk of heavy haul … 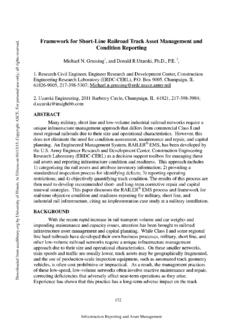 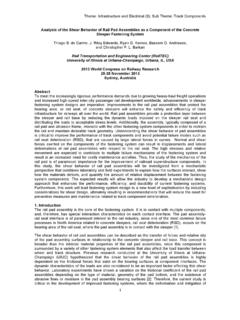 Theme: Infrastructure and Electrical (3); Sub Theme: Track Components 1 ! Analysis of the Shear Behavior of Rail Pad Assemblies as a Component of the Concrete 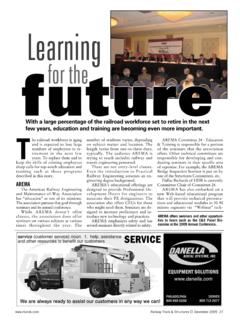 Learning for the Future - UIUC RailTEC

www.rtands.com Railway Track & Structures December 2009 29 on Bridges and in Tunnels. We plan to continue doing two ayear for the foreseeable future.” 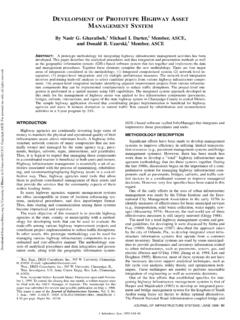 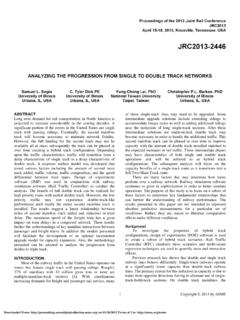 Analyzing the Progression From Single to Double … 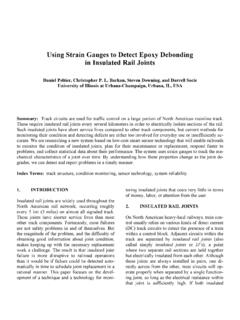 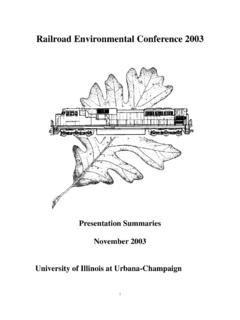 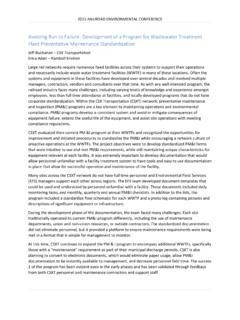 Avoiding Run to Failure- Development of a Program … 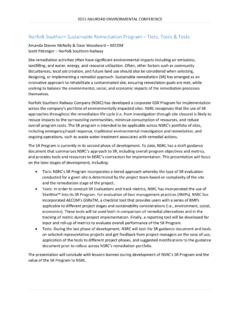 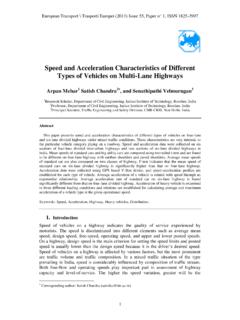 Speed and Acceleration Characteristics of Different … 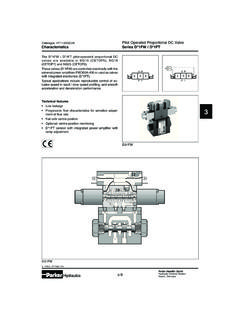 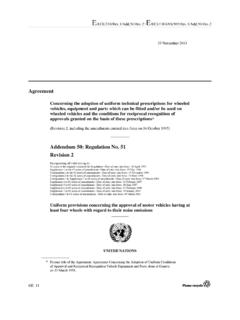 E GE. 11 Agreement Concerning the adoption of uniform technical prescriptions for wheeled vehicles, equipment and parts which can be fitted and/or be used on

Science Georgia Standards of Excellence Georgia Department of Education March 31, 2016 Page 3 of 4 S8P3. Obtain, evaluate, and communicate information about cause and effect relationships