In-depth Comparison of TDMoIP and CESoPSN . Yaakov (J) Stein June 2003. Several methods of transporting TDM over IP or MPLS networks have been proposed over the past few years, but most of the debate has been between two camps. The TDMoIP camp champions draft-anavi while the CESoPSN camp supports draft-vainshtein. This document compares the two technologies. 1 Design Philosophies Although not strictly relevant to a Comparison of the two protocols as they have developed, some knowledge of the original design goals of the two development teams involved will assist the reader in understanding the divergent decisions and trade-o s made by designers of each technology. TDMoIP was designed by RAD Data Communications, a company whose major expertise is in access networks, and was thus constructed to function even as an access method for enterprises or a means for campus users to converge networks. The RAD development team did not believe that incumbent carriers would immediately abandon their highly reliable and fully functional TDM.

1 In-depth Comparison of TDMoIP and CESoPSN . Yaakov (J) Stein June 2003. Several methods of transporting TDM over IP or MPLS networks have been proposed over the past few years, but most of the debate has been between two camps. The TDMoIP camp champions draft-anavi while the CESoPSN camp supports draft-vainshtein. This document compares the two technologies. 1 Design Philosophies Although not strictly relevant to a Comparison of the two protocols as they have developed, some knowledge of the original design goals of the two development teams involved will assist the reader in understanding the divergent decisions and trade-o s made by designers of each technology. TDMoIP was designed by RAD Data Communications, a company whose major expertise is in access networks, and was thus constructed to function even as an access method for enterprises or a means for campus users to converge networks. The RAD development team did not believe that incumbent carriers would immediately abandon their highly reliable and fully functional TDM.

2 Networks in favor of IP or even MPLS ones. They did believe that enterprises and alternative service providers would strive to cut costs and to maximize the return on their investment in broadband data networks. In fact, the great majority of the 12,000 TDMoIP ports deployed to date are used by enterprises, campuses, and alternative service providers. From the practical point of view, this viewpoint led to the development of devices that handled a relatively small number of ports, from a single T1 or E1 trunk, up to 16 trunks. From the protocol point of view, this viewpoint led to a strong emphasis on proper handling of fractional T1. or E1, necessitating full exploitation of TDM structure. Since enterprise customers do not usually have high quality clock sources, TDMoIP designers went to great lengths in designing adaptive clock recovery techniques that enable conformance with international standards even over degraded networks.

3 Becuase enterprise networks are often unreliable and overloaded, TDMoIP designers considered the careful handling of packet loss to be critical. Since enterprise customers often have simple PBXs, and some users even wish to directly connect analog phones, RAD designers were concerned with robust and e cient transport of TDM signaling. Finally, RAD's installed base of circuit emulation systems operating over ATM networks led the TDMoIP design team to prefer protocols that easily interwork with ATM CES. It is not a secret that Axerra, the company that developed CESoPSN , was founded by R&D personnel who left RAD for this purpose. Their vision was to elevate TDMoIP applications to the carrier level, providing a solution for the carrier's carrier'. This also explains their cooperation with proponents of SONET/SDH over packet networks. Since the CESoPSN team focused on a di erent client, if is not surprising that they de-emphasized various aspects important in TDMoIP 's design, while emphasizing others.

4 Carriers require very large systems handling large numbers of trunks, constraining processing power per input trunk 1. to be kept minimal. Furthermore, carriers generally deal in full trunks, so TDM structure is a secondary concern. On the other hand, Axerra expected their client to be in possession of a well engineered network', one for which packet loss and packet delay variation (PDV) are negligible. Furthermore, their clients would usually have an accurate local clock source, and so complex (and expensive) adaptive clock recovery schemes would not be needed. Also, carrier class clients in most of the world have long since abandoned CAS signaling in favor of CCS, so this responsibility too could be alleviated. Finally, having been formed at the height of the high-tech revolution, Axerra did not see any reason to require backwards compatibility or simple interworking with existing circuit emulation services.

5 In the following sections we will see that these design principles permeate every aspect of the two protocols, dictating quite di erent approaches and solutions to the various issues. The only aspect of the debate not readily understood from the design philosophies is the nomenclature. RAD, reusing technology originally developed for ATM CES chose the name TDMoIP , while Axerra, shunning ATM CES and emphasizing TDM frames trademarked the name CESoIP. The true reason for this bizarre circumstance is historical; RAD originally chose TDMoIP in order to conceal the connection with ATM, and Axerra had to resign itself to CESoIP, as TDMoIP had already been taken. 2 Encapsulation The most visible di erence between the two camps is the protocol used for encapsulation of the TDM data into packets. Both protocols chop the continuous stream of TDM data into segments, add protocol speci c headers and afterward the required UDP/IP headers or MPLS label stack, but there the similarity ends.

6 CESoPSN 's payload is relatively unaltered TDM data, but requires speci c payload sizes. TDMoIP has several payload modes which di er in the adaptation performed on the TDM segment before adding the headers. Control word Yet the rst di erence between draft-vainshtein and draft-anavi has nothing to do with the TDM. payload format, rather it is in the control word. The control word is protocol-speci c information added to the payload, and includes, at minimum, a sequence number and various ags. Early on TDMoIP the control word used by the Martini drafts, which was later adopted as the standard control word by the IETF PWE3 working group. CESoPSN utilizes a variant of the control word invented for the draft-malis, a protocol for transporting SONET over MPLS. The draft-malis control word includes a 13 bit pointer, needed for SONET/SDH payloads, but unused for CESoPSN . In order to accommodate this SONET-speci c requirement it omits the length indicator (which is not needed for SONET/SDH payloads, which are large) and uses a smaller sequence number.

7 The CESoPSN mechanism requires no pointer in its header, and so the reason for utilizing the non-standard control word is unclear. The control word used in the Martini drafts always has its rst four bits equal to zero. This fact is exploited by MPLS switches to distinguish between pseudowires (which will have the rst nibble after the label stack set equal to zero) and IP packets (which have the IP version number 4 or 6. in this position). Unfortunately, the draft-malis control word has various ags in this place, and is hence incompatible with MPLS switches that use this MPLS PID . A kludge has been suggested whereby an additional long-word of all zeros is inserted between the bottom of the MPLS label stack and the control word, a mechanism that adds un-necessary overhead to salvage the situation. The next di erence in the control words used by TDMoIP and CESoPSN is their use of ags to indicate network problems.

8 The CESoPSN draft de nes ve ags, of which one merely indicates 2. use of an extended (64 bit) control word, which, however, is never used in CESoPSN . Another bit designates defects in reception from the packet network, while the three remaining bits map to speci c TDM network faults. Of the eight possible combinations only four are legal. The TDMoIP control word includes only two ags, representing a higher level abstraction of network faults. The L (local) bit is used to indicate a fault in the TDM network attached to the TDMoIP . gateway, while activity of the R (remote) bit signi es that the gateway is not receiving packets fromthe packet network. These ags are general purpose interworking indicators and do not contain TDM-speci c alarm information. Such detailed information is not required at the interworking function level, and is, in any case, carried in the TDM payload. The control word's sequence number is used to detect lost or misordered packets.

9 TDMoIP utilizes a 16 bit sequence number, while CESoPSN uses a smaller 14 bit one. Both of these are more than su cient for TDM transport applications. RTP. CESoPSN mandates the use of RTP, the IETF's real time protocol. While draft-anavi allows the inclusion of the RTP header, TDMoIP technology does not exploit it in any way. RTP is universally used for VoIP applications, and provides an excellent solution to two of VoIP's problems, namely enabling constant rate playback of non-constant bit-rate ( compressed voice) signals, and absolute time synchronization of distinct real-time streams ( for combining multiple speakers in conference calls). Neither of these features is required for TDM transport over packet switched networks. The RTP header is large (at least 12 bytes) and so adds signi cant overhead to the packet. Although the header contains other elds, CESoPSN exploits only the four-byte timestamp, and the two-byte sequence number.

10 The sequence number is redundant as there already is a sequence number in the control word ( CESoPSN suggests equating these). CESoPSN proponents suggest that the RTP. timestamp can be used for TDM clock recovery. Regrettably, it can be shown mathematically (see The Insu ciency of RTP for TDM Clock Recovery' by the present author) that use of the RTP. timestamp does not signi cantly contribute to the reconstitution of a clock signal that conforms to international standards for jitter and wander allowable on TDM circuits. This may explain the consistent objection of CESoPSN proponents to speci cation of a hard requirement for such conformance. More precisely, what can be shown is that of all methods of utilizing the RTP timestamp, the one that minimizes reconstructed wander does not use the timestamp at all. This conclusion is not surprising for several reasons. First, RTP is a layer four protocol, while clock recovery is a physical layer problem. 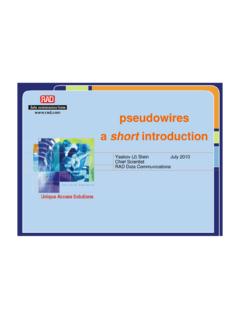 Pseudowires Pseudowire (PW): A mechanism that emulates the essential attributes of a native service while transporting over a packet switched network …