IN THE HIGH COURT OF SOUTH AFRICA KWAZULU …

in the high court of south africa kwazulu-natal division, pietermaritzburg case no: 7904/2016 p in the matter between:

4 Costs of the application, such costs to include the costs of two counsel. JUDGMENT. _____. KOEN J. INTRODUCTION: [1] The eighth provincial elective conference ( PC') of the African National Congress ( ANC') for the Province of KWAZULU - natal ( KZN') was held from 6 to 8. November 2015. Its propriety is the subject of dispute in this application. 4. [2] The First, Second, Fourth and Fifth Applicants1 ( the Applicants'), all members of the ANC, in their Notice of Motion seek the following order: (a) That the 8th KWAZULU - natal Provincial Elective Conference of the African National Conference held at pietermaritzburg on 6 to 8 November 2015 and its decisions, resolutions and elections are declared unlawful and invalid and, as such, are set aside;2.

5 (b) Declaring that the recognition, approval and/or endorsement by the ANC (the Thirty-Ninth Respondent)3 of the aforesaid Provincial Elective Conference, its decisions, resolutions and elections, are likewise declared unlawful, invalid and of no force or effect';4. (c) That's (sic) the costs of the application are to be paid by the Thirty Eighth Respondent, the ANC, jointly and severally with any other party unsuccessfully opposing it, including the costs of two counsel.'5. [3] In Ramakatsa and Others v Magashule and Others6 ( Ramakatsa'), the Constitutional COURT in regard to a similar attack on the propriety of the Free State provincial conference of the ANC held from 21 to 24 June 2012, said the following in regard to the relief claimed: [124] In our view, a declaration that the provincial elective conference of ANC and the decisions taken at the conference are unlawful and void should suffice.

6 We emphasise that the declaration of invalidity applies only to the Provincial Conference. The declaratory order we make does not relate to or affect the rights of delegates who have been elected at properly constituted branch general meetings of the Free State province to serve as delegates at any other conference of the party.'. [4] No doubt influenced and guided by similar considerations, by the time this application came to be argued, the relief sought by the Applicants in the alternative 1 Initially there were five Applicants but the Third Applicant subsequently withdrew from the application and the judgment accordingly only deals with the remaining four applicants.

8 And/or (b) That the PC was affected by various material irregularities which occurred during the pre-conference period and/or at the conference itself relating to the auditing of branch membership, branches being allowed inadequate time for remedying any errors found, insufficient time being allowed for appeals against findings of the auditing committee, discrepancies in the accreditation of delegates, and the manipulation of the voting results at the conference. There are various material factual disputes arising in respect of the irregularities alleged by the Applicants referred to in sub-paragraph (b) above.

9 Confronted with that reality, the Applicants have nevertheless elected to argue the application on the papers, accepting that material factual disputes must be resolved in favour of the Respondents in accordance with the test espoused in Plascon-Evans Paints Ltd v Van Riebeeck Paints (Pty) This judgment proceeds on that basis. BACKGROUND: [6] The seventh provincial conference ( seventh PC') of the ANC in KZN was held from 11 to 13 May 2012. 7 1984 (3) SA 623 (A) at 634G-653C. See also Ramakatsa para 94. 6. [7] At the beginning of March 2015, the KZN Provincial Executive Committee ( PEC') proposed to commence preparations for a conference to be held from 25 to 27 September 2015, which the National Executive Committee ( NEC') refused.

10 In August 2015, the PEC re-approached the NEC for permission to hold the PC on 6 to 8 November 2015. Such permission was granted by the NEC at its meeting of 18 to 20 September 2015. [8] A document entitled WHAT CONSTITUTES A LEGITIMATE ANC. CONFERENCE' relied on by the Applicants8 stresses the need to understand the fundamental processes and procedures that constitute a conference. It inter alia provides in one part as follows: Tabulated hereunder are certain procedural challenges that might be encountered along the way when attempting to host a successful Conference. It is recommended that if the following primary principles are adhered to then such challenges may be averted. 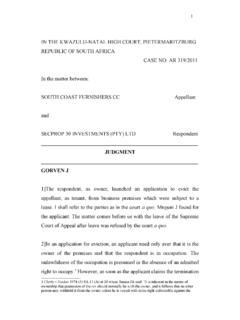 IN THE KWAZULU-NATAL HIGH COURT, …

in the kwazulu-natal high court, pietermaritzburg republic of south africa case no: ar 319/2011 in the matter between: south coast furnishers cc appellant 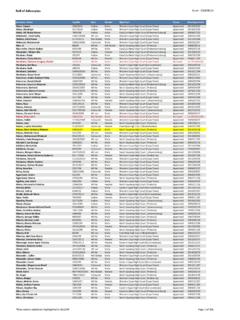 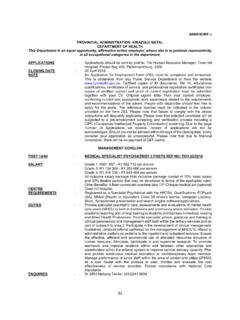 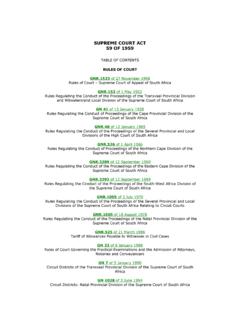 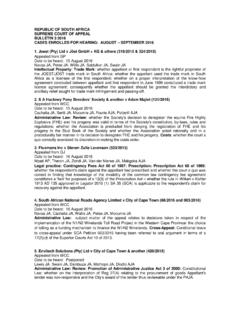 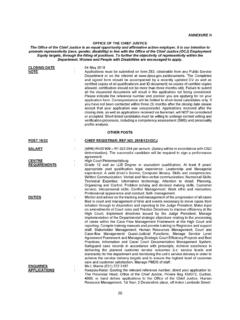 20 ANNEXURE H OFFICE OF THE CHIEF JUSTICE The Office of the Chief Justice is an equal opportunity and affirmative action employer. It is our intention to